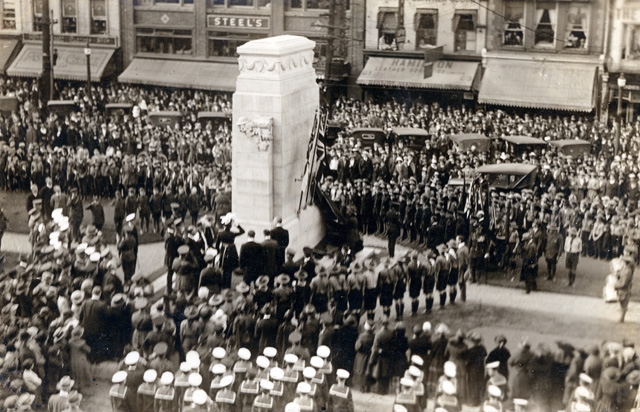 Much like the rest of the city, Gore Park is set to undergo some major changes. With the rising interest in the Hamilton housing market, and in addition, the Pan Am games approaching at blazing speeds, the all eyes are focused on the heart of the city—Gore Park. The park is likely the first impression tourists will get of the city. As well, the appearance of the park has a profound effect on the surrounding businesses and housing. So, what’s in store for the influential plot of land?

The Cenotaph’s getting a facelift
Remembrance Day celebrations will not be held at Gore Park this year. That’s because the cenotaph, where the ceremony is usually held, will be undergoing a much needed rework. The mortar of the 91 year old monument is slowly eroding, compromising the structural integrity of the cenotaph. The monument will be lifted from its place, refurbished, and rotated 180 degrees on a north-south axis, once again instating it as prominent focal point in the heart of the city. The monument will also be shifted south, eliminating a troublesome access barrier.

Memorial Wall
An inner-lit, double sided wall will be introduced to the area, in dedication to post Second World War Canadian Military contributions.

The Enclave
Nine double-sided panels will be placed along the pedestrian walkways of Gore Park. Each panel will consist of an image and corresponding word commemorating Hamilton’s military service.

John A. Macdonald
The Sir John A. Macdonald statue was first brought to Hamilton following the death of Canada’s first Prime Minister. From 1983-1907 the statue was placed on a granite pedestal at the intersection of King and Hughson. The statue was then relocated to Gore Park where it’s stood proudly before the before the heart of the city ever since. But the new plans for the Park see Macdonald getting a major change of scenery, though perhaps for the better. The statue and cannons will be relocated to the newly built forecourt of the Connaught Building.

An Homage To Peace
A public art piece will take the place of where the John A. Macdonald statue currently stands. The piece, to be installed no sooner than 2016, will uphold the theme of Veterans’ Place.