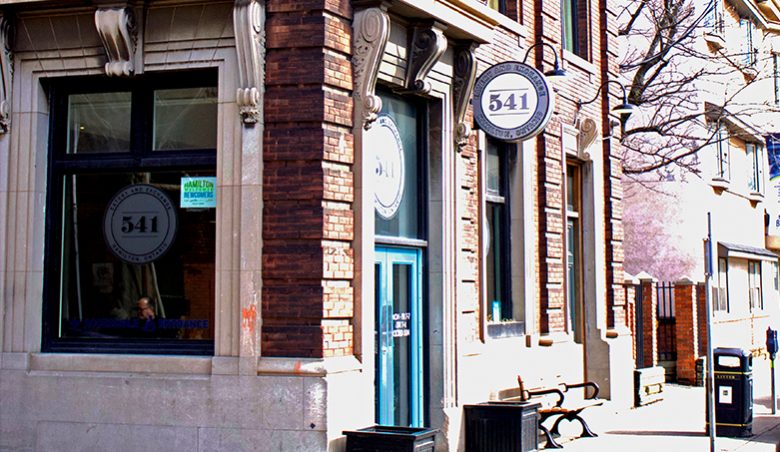 In the midst of an exploding food scene in Hamilton over the past few years, we have one of the most unique places anywhere in 541 Eatery and Exchange, a not for profit restaurant located at 541 Barton St. East. Their concept is bold, audacious and brilliant. Located in a building that was formerly used as a bank, the people behind 541 have created a widely used community space that offers excellent food at very reasonable prices.

The uniqueness of 541 is their ‘pay it forward’ system of using buttons as currency. There are 2 jars of buttons on the counter by the cash register. One jar can be used by patrons to make a donation-each button represents one dollar. Buttons are donated and placed in the second jar, allowing other patrons to use these as currency, up to five dollars or buttons per day. The idea here is to provide an opportunity to allow the entire community to be able to come to a place, order a healthy meal and be served at a table, regardless of their financial status, creating a sense of community and dignity for all.

541 has been in existence for 2 and a half years, and has been a resounding success. Sue Carr, Executive Director said they “wanted a place for the community to look after itself by volunteering, paying it forward with the button system, donating or engaging in the wide-ranging programs we offer.” These include a regular after–school homework club, annual Christmas parties, and a hugely successful Galentine’s party for the women of the Barton East community this February.

Miranda Crockett, a manager and co-founder of 541 spoke about the impact they have had on the neighbourhood, and indeed the citywide community. “We wanted to create a space where people from different stratified social groups could come together. We felt this was our biggest gamble: would people sit with people who are different from them.” It has certainly worked out, and she sees it as a drawing factor for them.

The restaurant itself is gorgeous-a well-lighted space due to the banks of windows and high ceilings. The floors are wide wooden planks, and the wooden tables come in a variety of sizes to accommodate all manner of groupings. There are counters and stools overlooking both Barton and Westinghouse streets. The brick walls are painted white and adorned with an ever-changing presentation of local art. It is very funky.

The sense of community pride and ownership of 541 is also evident. “People who use buttons everyday-when they get some money, they buy buttons to contribute to be on the giving end of the pay it forward system,” said Crockett. “Poverty does not preclude generosity.” Area residents feel that 541 has put them on the map, and helps to normalize an area that is often looked down upon. A local resident once told Crockett she was ashamed to tell people she lived on Barton Street. Now she’s proud to say she lives across from 541.

Crockett also said the founders wanted to create an affordable, full service restaurant that served healthy meals in order to combat the “food desert” of that part of Barton, dominated by fast food options and variety stores. The idea of serving affordable food is a huge boon for struggling customers. It also encourages those who have the means to contribute to do so, given that the food they purchase would be far more expensive in any other place.

However, keeping costs low is a challenge, given that 541 pays market prices for most of the food they serve. “The way to keep prices low is to reduce payroll costs,” said Carr. As a result, 541 employs 13 people in full and part-time positions. Its real strength, according to Carr is the virtual army of some 200 volunteers who help run the place by doing food prep, front-of-the-house service, dishwashing and a myriad of other tasks that make 541 run smoothly and efficiently. Many of the volunteers come from the local community, and enjoy the opportunity to give back. She also said the significant numbers of volunteers helps to create a “home-like environment-it’s not utterly polished, but it helps to create a relaxed environment where a huge mix of people share the same space and eat the same food.”

This relaxed environment also extends to the kitchen said chef Carolyn Vaughn, who has been part of the 541 team from its earliest days. Unlike the restaurant kitchen that is typically portrayed as an intense and sometimes hostile place, this kitchen is positive and encouraging. “We are trying to serve the community here. We try to act as mentors, focusing on teaching and welcoming people first, before worrying about kitchen and serving chaos.”

Donations can be made in-house or online at http://fivefortyone.ca

There are actually three ways or streams to donate, but Carr said they are kept very strictly separate. “If you donate toward buttons, that money goes toward buttons.” Most donations come at the Christmas season, and are parceled out throughout the year.

If you haven’t been yet, you should go. Go for a great coffee or cappuccino; or a baked treat; an excellent breakfast; or a full meal, like a pulled-pork sandwich, homemade soup, or a plethora of other choices. If you have the means, you can donate buttons. You will experience a truly unique place that helps to create a tremendous sense of community in an often over-looked part of Hamilton. You won’t regret it.

Carr told me they “hoped 541 was a good neighbor, and hope we’re showing people possibilities of what could be. Grace begets grace.” Indeed! If you go, you’ll see how true that is.