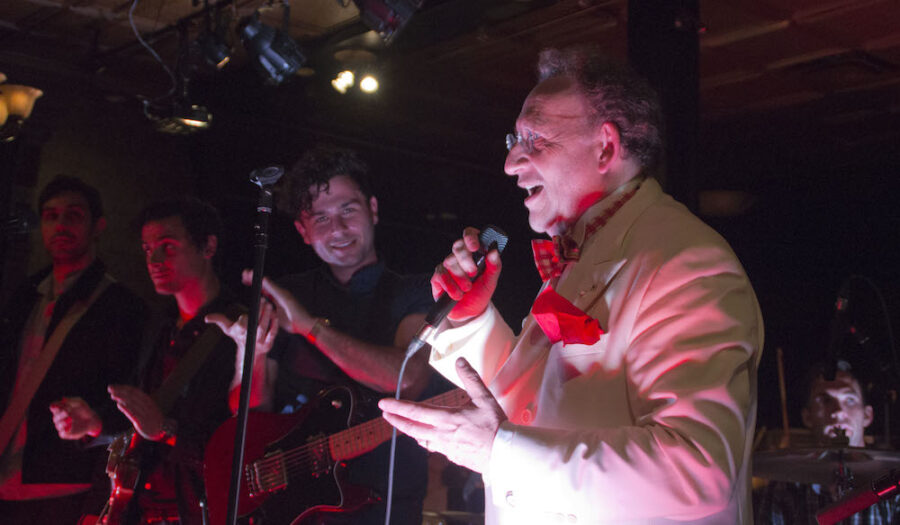 It was a blur, but it was nothing short of spectacular.

As always, the July edition of Art Crawl had artists and vendors lining James Street North and crowds of Hamiltonians enjoying the downtown core, but the real excitement was brewing just around the corner on Park Street. Two of Hamilton’s true rock stars, Boris Brott and the Arkells, collaborated for a secret pop-up show to officially launch their upcoming album, High Noon.

The show was a treat for the handful of people lucky enough to attend. Tickets for the four performances evaporated within hours of being announced. The moderately sized room at Park Street Gasworks was split in two: one half occupied by the National Academy Orchestra and the other by the crowd. The Arkells stood on a riser in the middle, Brott conducting just behind keyboardist Anthony Carone.

They opened with “Come to Light”, the first single from High Noon. It’s one thing for rock bands to create as a sound as possible in a live venue, but combined with a full orchestra, every little accent and hard beat felt more emphatic. The single already boasts layers of keyboards, guitars, and vocals, and the orchestral arrangement seemed to come in and out naturally. The short, 25-minute set also included “Never Thought This Would Happen”, which features its own string arrangement on the album. To end their set, they played “Whistleblower” from 2011’s Michigan Left. The enormous sound of the violins, violas, cellos, and electric guitars playing the song’s hard-hitting riff was incredible.

As lead singer Max Kerman bounced around the stage, Brott conducted his orchestra with a smile. The legendary conductor even sang a few lines with Kerman. For the last two arrangements of the set, Brott stepped away from his stand and joined the audience in singing along to “Whistleblower”.

It truly was a special night for both the Arkells and Brott, who joked about the orchestra coming along for the band’s upcoming tour and headlining slot at this year’s Supercrawl, which would come as a relief to those who missed out on tickets for the secret shows. Given the success of the collaboration, it shouldn’t be out of the question. If they sounded that great in 30 minutes, imagine what they could do with a full set. We’ll just have to wait and see.