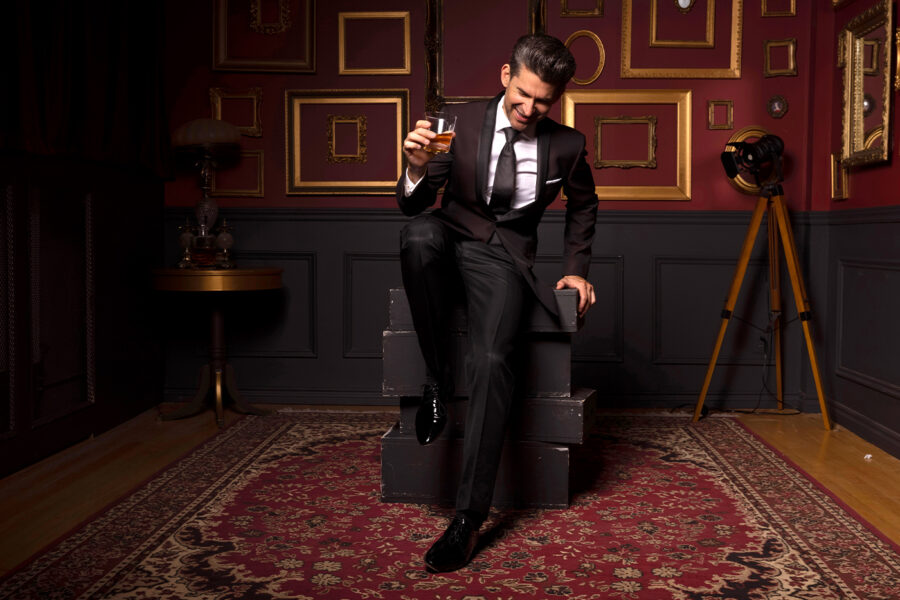 Canadian crooner Matt Dusk will be singing Sinatra in Hamilton

Hamiltonians who find themselves swooning for crooning are going to love an upcoming concert event featuring Canadian jazz vocalist Matt Dusk, coming to the city for one night only.

The multi-award-winning singer – known for his silky smooth, transporting takes on timeless jazz standards – will be taking the stage in Matt Dusk Sings Sinatra at The Studio in FirstOntario Concert Hall on Wednesday, September 14th at 7 pm.

A Toronto native, 43-year-old Dusk has become one of Canada’s best-known crooners, releasing a popular discography of jazz albums and touring all over the world for more than two decades.

Even well before achieving those massive milestones, music was deep in Dusk’s blood; he started singing at the ripe age of 7 after being accepted into St. Michael’s Choir School, honing his talents with opera and classical repertoire.

Eventually, though, Dusk was pulled in by the swingin’, singular allure of legends like Nat King Cole, Tony Bennett, and Sarah Vaughan and found himself shifting his focus to the intoxicating world of jazz music.

“I was immediately attracted to this golden age, bygone era,” says Dusk, who recalls hitting up jazz clubs in the ‘90s and being struck by roomfuls of people drinking, having fun, and singing along to timeless jazz standards that have become so deeply embedded into popular culture.

His music studies at York University quickly led Dusk to pursuing his career as a jazz singer, recording numerous albums independently before signing with labels including Decca Records, Royal Crown Records, and Magic Records and releasing a dozen hit jazz and pop albums; some of which have reached Gold and Platinum status on the charts.

Dusk’s latest tour comes on the heels of his most recent album release Sinatra with Matt Dusk, where the singer interprets some of the most iconic jazz songs of all time – from Fly Me to the Moon to Lady is a Tramp – in the signature Sinatra style that Dusk says his vocal range feels right at home within.

When asked what excites him most about getting to hit the road again after multiple years of the pandemic impacting the live performance industry, Dusk’s response is a quick and definite one.

“Finding that communal feeling over a screen just doesn’t really do it. There’s a lack of that emotion that you get from an audience; and an audience is the most important part of the evening,” he explains.

“It’s a non-verbal communication where we can all not know each other, and come into a room. Live music is all about the hang.”

A Matt Dusk concert certainly leans into the communal vibe that only live performance can offer; whether playing a room of 200 people or 2,000, this eminently charming performer knows how to draw everyone into a sense of immersive intimacy.

It helps that his setlist is packed with golden age hits that so many people know by heart and often have a personal, comforting connection to; an ideal balm for some pretty tumultuous times.

“After the pandemic, I think people want to look back at the familiar,” Dusk says, and he holds true to that idea by closing every single concert with the Sinatra and Paul Anka co-written song My Way: a song he says holds special significance for so many in his audiences.

“Not only does the meaning of the song change when you get older, but how many countless people have used that song as something to identify with?” he says.

“There is no show without that song.”

Hamilton happens to be the first stop on Dusk’s 2022 tour, which will also take him relatively nearby to places like Ottawa and Belleville or as far away as Germany and Lithuania.

But the connection to the Hammer is strong. Not only is Hamilton the closest tour stop to home for this Toronto resident, he’s also played in The Studio at FirstOntario Concert Hall an upwards of 20 times, and even sung the national anthem for Hamilton Bulldogs games in the past.

Dusk is quick to express his fondness for Hamilton and his excitement to return to the city with Matt Dusk Sings Sinatra: a special concert event that’s sure to revive old memories and make some cherished new ones, too.

Matt Dusk Sings Sinatra takes the stage at The Studio at FirstOntario Concert Hall on Wednesday, September 14th at 7pm. Tickets are available now via Ticketmaster.