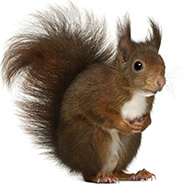 A reflection on Sciuridae Rodentia. Sort of.

So this Australian guy came to Hamilton and got used to everything here pretty quickly. Everything, except for the squirrels.

You’d be outside on a sidewalk or a patio talking with him, when suddenly he’d go quiet and stare upwards. You’d look up too and see nothing unusual. Then you’d realize he was staring at a squirrel running along a telephone wire, as if it was an amazing exotic creature.

“You don’t have squirrels in Australia?” I asked once.

“Nah, mate. The only wild mammals we have in our cities are mice and rats. Those squirrels, they’re like half giant rat, half monkey. Those massive tails. And they’re everywhere!”

So, for fun, I said, “Squirrels often get rabies. And when they do, they leap off trees onto people and start biting and scratching. Usually you can yank it off, but not always. A guy I knew in school was killed by a rabid squirrel.”

“It gnawed the poor kid to pieces, then ran off and buried his nuts.”

“Canadian flying squirrels are worse. They only come out at night. A pack of them will swoop down and drag someone up to their nest to feed their bloodthirsty young.”

“Sounds like our koala bears. Total menaces.” “Exactly.”
In all honesty, squirrels are one of the best features of

Hamilton/Burlington’s urban wildlife. Aside from house pets, what other mammal can compare? Raccoons? A bunch of sneaky, masked, garbage thugs. Skunks? Skunks are very cute, yeah, but also stinky, especially when you hug them. Chipmunks? Sort of cute, I guess, but the nervous, hectic way they move is annoying. Coyotes? When I’m crossing a field or ravine and see a coyote, I nervously think of Little Red Riding Hood or Liam Neeson in The Grey. Bats eat lots of mosquitoes but are still creepy. Rats and mice? Not nice.

You’ve got to give the “best independent local animal” reader’s choice award to the squirrel: a beautiful beast, with sleek fur covering its athletic physique, from aquiline nose to feather-duster tail. Active during the day, squirrels are somewhat intelligent and usually of good character. They rarely bother anyone except for other squirrels and those birds who have nothing better to do than loiter at bird-feeders. Black and grey squirrels are in the same species; they freely interbreed and, unlike humans, never discriminate based on colour. The acrobatic and gymnastic skills of squirrels (often displayed on “squirrel-proof” bird-feeders) are truly excellent – better than those clumsy klutzes at Cirque de Soleil. Unlike many humans, squirrels keep their personal lives dignified and private, rarely appearing in the tabloids. Embracing the simple life, squirrels collect their food and build their nests and are content with that. They embody a philosophy I admire and would like to follow someday.

Most squirrels are devoted environmental activists, as well. By burying tree nuts everywhere and only digging up some of them in the winter, squirrels provide an ongoing, effective, volunteer tree-planting program that restores Hamilton’s struggling green-leaf canopy. In recognition of these valuable efforts, I suggest that Environment Hamilton start accepting squirrels as members … maybe even directors of the board.

Before she married me, my wife had a relationship with a squirrel. When she was washing dishes at the kitchen sink, a grey squirrel would often appear outside the window over the sink, pacing on the concrete ledge. Some- times it would chatter to her, other times it would silently watch her scrub and rinse her oatmeal bowls. She named it Miró, after the artist, and would sometimes give it a friendly greeting. But when she told a neighbour about this, her friend said, “Don’t tell me that you’re turning into one of those crazy ladies who talks to squirrels!” After that, my wife maintained her friendship with Miro, but stopped telling people about it.

At the sight of a squirrel in our yard or darting across a sidewalk, Coco starts woofing like Cujo and lunging aggressively toward it. She’ll strain wildly on the leash or try to jump the fence to get that squirrel. Coco’s barking would translate into English as something like, “EVIL! DANGER! ALERT! EVIL! DANGER! ALERT!”

Sometimes she’ll pause and look back at me, her facial expression saying, “DON’T YOU SEE THIS? THERE’S AN EVIL AND DANGEROUS SQUIRREL OVER THERE! HOW CAN YOU BE SO COMPLACENT?”

Of course, squirrels are not really a danger to dogs. In fact, the opposite is true. Dogs, cats, coyotes, hawks, tree- snakes, kids with air-rifles, traffic, ice-storms, disease, accidental falls, cartoon Russian spies – far too many local squirrels fall victim to these and other threats. Most squirrel lives end in tragedy.

So, the next time you encounter a dead squirrel on a lawn, a sidewalk, or a street, dear readers and Australian friends, please stop and pause for a moment in silent reflection.

This squirrel, like every other, was born in a ball of leaves high in the branches of a tree. Raised, like all squirrels, by a single mother who struggled to make ends meet, loving her fluffy family as much as any human parent, this unique squirrel grew up with hopes and dreams like yours, just a bit more nut-related.

Consider the squirrel, dear reader, perhaps with a melancholy sigh, before you move on, toward your own inescapable destination.