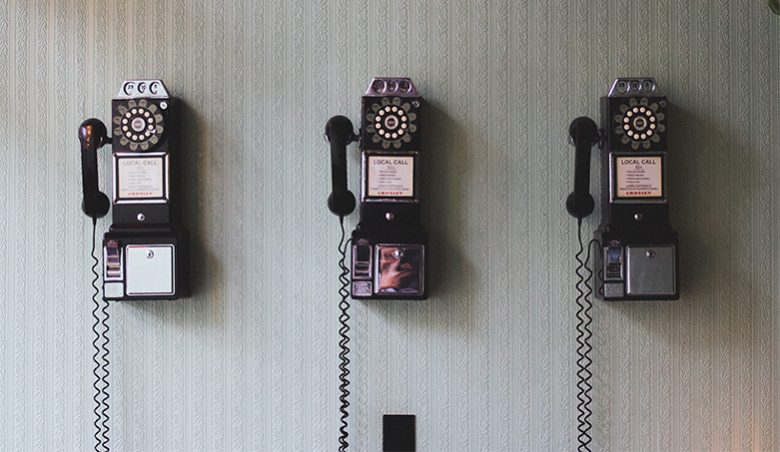 Our home phone number is on the national do-not-call list, but telemarketers keep calling anyway.

That used to annoy me until I figured out a way to enjoy their calls, while also promoting literature. How? Like this: our home phone rings and I pick up and say “Hello?” and hear a silence for a few seconds, followed by a cheery-sounding voice with (usually) an East Indian accent saying, “Hello, how are you today?”

That’s when I grab the closest written material. Last time it was Dostoevsky’s long novel of sin and redemption, The Brothers Karamazov, left by my wife on the kitchen counter. I opened the paperback to a random page and sentence and read aloud to the telemarketer, “I was once bitten by a centipede and was in bed for two weeks with a high fever.”
After a pause, the stranger on the phone said, “Sir, this is duct cleaning services. How are you?”

I continued with, “So now I felt as if a centipede or some other noxious insect had again stung my heart and contaminated me. I suppose you see what I mean, don’t you?” Another pause, then he said, “Sir, are you the homeowner?” I flipped a few pages ahead (because I prefer third-person passages) and read aloud, “Just as expected, Alyosha found his father sitting at the table.”

“Pardon me?”
“The living room, the largest room in the house,” I said, “was furnished with a sort of old-fashioned pretentiousness. The furniture was white and very old, covered in a red silky material.”
“Sir, I’m calling about duct cleaning services.”

I replied with, “On the walls between the windows hung mirrors in over-elaborate frames. In the corner, there were several icons, in front of which a lamp was lighted every night.”

A long pause, then, “Sir, what you are saying makes no sense.”

“Mr. Karamazov usually went to bed late — at three or four in the morning — and until then he would pace the floor or sit in an armchair and meditate.”

The telemarketer hung up on me.

The immediate goal of my hobby is to keep the telemarketer on the line for as long as possible while saying nothing except what is in the written text. To prevent a premature hang-up, I’ll sometimes read the random lines in a highly emotional tone, as if making a heartfelt confession. Sometimes I’ll end a line with a friendly chuckle as if inviting the telemarketer to join me in the joke. But none of them, so far, has ever understood or appreciated why I was so non-responsive. Always, their voice gets flustered and then they hang up. I’m surprised they haven’t put me on THEIR do-not-call list yet.

It isn’t only classic novels that I read to telemarketers. Once I read from a brochure about paint from Home Depot. Another time, it was an article in The Spectator about the McMaster Marauders volleyball team. Another time – which lasted longer than usual – I read from a gritty crime novel about a detective chasing a serial killer. I guess that telemarketer got caught up in the suspenseful plot for a while, before realizing that she needed to hang up on me. In June of this year, I regaled a telemarketer (who was probably also a criminal hacker) with an editorial from urbanicity Magazine.

“Hello, this is Microsoft Support with a critical upgrade. Are you in front of your computer?”
I said, “It can be both comforting and frightening to accept the fact that history is linear.”
“Pardon me?”
“While it often can feel or appear cyclical, history is, in fact, always moving forward.”
“We have had a serious report of a problem with your computer, sir. Are you now in front of your computer?”
“It’s up to us as individuals, organizations, and societies to learn from and to avoid repeating mistakes made in the past.”

“What are you saying to me, sir?”
“I’m not going on an existential rant, I promise,'” I quoted, adding, “I only bring this up because it’s healthy to point this out every now and then.”
“Point what out?”
“Hamilton sometimes seems to be stuck in a cyclical way of thinking.”
“Try to understand, sir. I am calling from Microsoft. You have a problem with your computer.”
“Lately, I’ve been struck by how ironic it is that Hamilton’s city council is –”

I find my hobby enjoyable, and my sons like to listen in, sometimes laughing so hard that they have to leave the room. My main purpose is, of course, educational. As an author and a fan of literary arts, I wish to spread the joys of great prose, even across the ocean on a fuzzy VOIP line. Telemarketers lead busy, hectic lives and too often fail to take the time to savour well-crafted literary expression. By exposing them to this art, I provide a valuable global service.

And I refuse to underestimate my audience. Telemarketers are intelligent people, in my experience, and I wish to challenge them with bold, innovative and unconventional literary works, broadening their understanding of literature … and of life.

That’s why I now have a copy of James Joyce’s experimental masterpiece Finnegan’s Wake resting on our kitchen counter, ready for the next time a stranger calls.