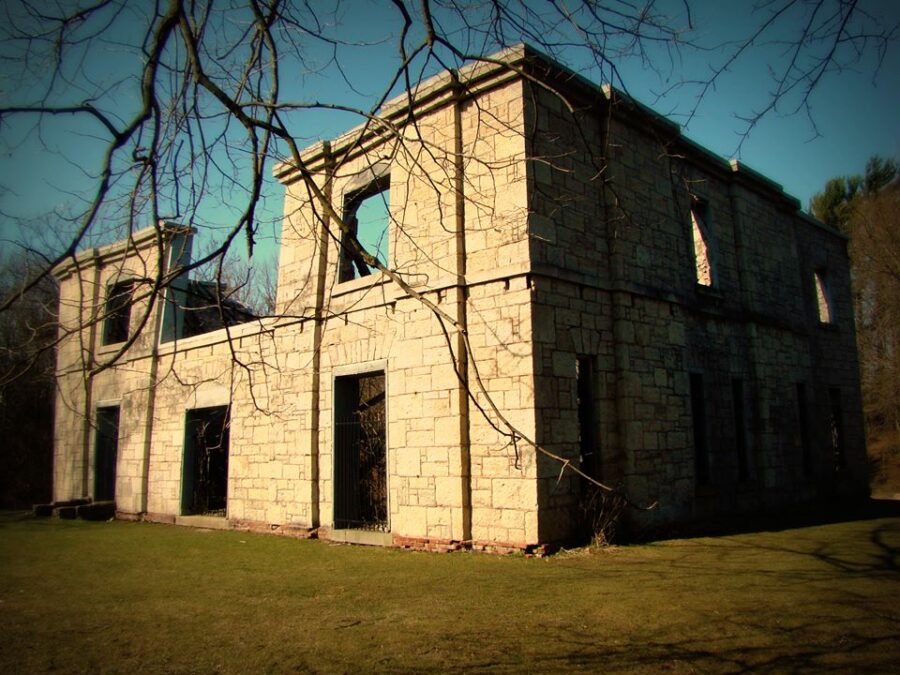 I’ve spent the past decade travelling to some of the most famous haunted places in North America.

Locations that will make your skin crawl, your toes curl and your hair stand on end.

We’re talking asylums, jails, forts… all historical places that are notorious for being so creepy that many people don’t want to visit, let alone spend the night. I’m quite the opposite actually. It’s not only a curious hobby, it’s a peculiar passion that’s also my job!

My career has been devoted to exploring the strange and unusual. Visiting places that go bump in the night, so to speak. I have touched the tomb of Marie Laveau, Voodoo Queen of New Orleans, I’ve walked the blood-stained battlefields at Gettysburg and I locked eyes on those famous attic windows at the Amityville horror house in Long Island, NY. I’ve spent entire evenings “quarantined” in old asylums and sanatoriums that once housed the ill and insane and have been “put on lockdown” in some of the creepiest jails and prisons in all of the United States.

All of these places tell momentous stories of circumstances captured in time (whether good or bad!) But the more I visited these places, the more I began to realize that nothing beats the unique and inimitable history that can only be found right here in my own City!

Some of the most scandalous stories in Canadian history can be traced to Hamilton, Ontario. News that captured not only a city, but an entire nation. Notorious bootleggers such as Rocco Perri (Canada’s Al Capone), who became the leading figure in organized crime in Ontario in the 1920’s, and fierce femme fatale Evelyn Dick who became known as the “torso” murderess when her husband’s decapitated and limbless body was found in 1946 on the escarpment.

Or go back even further… 1856 to be exact, when a man named Francis Tumblety (1833-1903) came to town. A self-proclaimed physician and herbal remedy doctor, Tumblety was known for selling his “Pimple Destroyer” creams and “Indian Root Pills” out of the grand old hotels in downtown Hamilton. His original newspaper ads can still be seen today in the archives of the Hamilton Public Library. After some stints in Toronto, Montreal and the United States, Tumblety later surfaced in the Whitechapel District of London, England in 1888. Does that date and place ring a bell? Little did Hamiltonians know that they were mingling with a man who 30 years later would be accused of perpetrating the horrific crimes carried out by the one and only Jack the Ripper! That’s right folks… Jack the Ripper could have very well lived and killed right here in Hamilton!

Stories of crime, murder, death and sickness. Tragedy, suicide, conspiracy, love and even love lost. All of these combine to form the perfect recipe for a classic ghost story that can be passed down from generation to generation. Whether they are tales told under the night sky around the campfire to scare one another, or legends to share with your friends over dinner, one thing remains the same… we have and will always be fascinated with a good old-fashioned ghost story. Even better if that creepy story happens to take place right here in our own backyard!

If you grew up in Hamilton, at one point or another you probably heard about the famous “Lady in Black” who resides within the walls of the old Customs House down by the railway tracks on Stuart Street. She is a spectral figure, rarely seen but often felt by staff and visitors alike (myself included!) She has been called “Hamilton’s oldest ghost” and accounts of her presence can be traced back as far as 1873 in Alexander Wingfield’s Poem “The Dark Lady” where he describes her as standing 6 feet tall with hooves and horns (each a yard long!).

Some other famous and legendary Hamilton ghosts include Sir Allan MacNab and his daughter Sophia at Dundurn Castle, William Black at the Hermitage Ruins in Ancaster, the Lady in White at the Royal Connaught Hotel, and the spirit of theatre magnate Ambrose Small at the Tivoli Theatre. There are also reports of phantom soldiers at the Armouries, Jane Riley at Albion Falls, ‘gremlins’ in the bell tower at St. Paul’s Church, and many more!

Our history reflects the hopes and ideals of that era. I once read that Hamilton’s “golden age” has passed. Sure, the Victorian era of Hamilton is long gone, and so are many of the grand buildings that came and went with it. But Hamilton has always been known as the “Ambitious City” and has fought hard to retain that title. We are no longer known for being hidden under the smokestacks and soot of our industrious steel town mentality. We are moving into an exciting new time for our City, so I can’t help but think that Hamilton’s ghosts are just as excited as we are to see what’s in store!

STEPHANIE LECHNIAK is Founder and Owner of Haunted-Hamilton, a strangely unique business that operates Haunted Tours and Bus Trips to spooky locations all over Canada and the US. Stephanie is also Host & Producer of “Haunted Hamilton’s Ghost Stories” on Cable 14 and “The Haunted Hamilton Radio Show” on 93.3 FM CFMU. She has also appeared on OLN’s “Creepy Canada” and YTV’s “Ghost Trackers”.
www.Haunted-Hamilton.com
www.facebook.com/HauntedHamilton