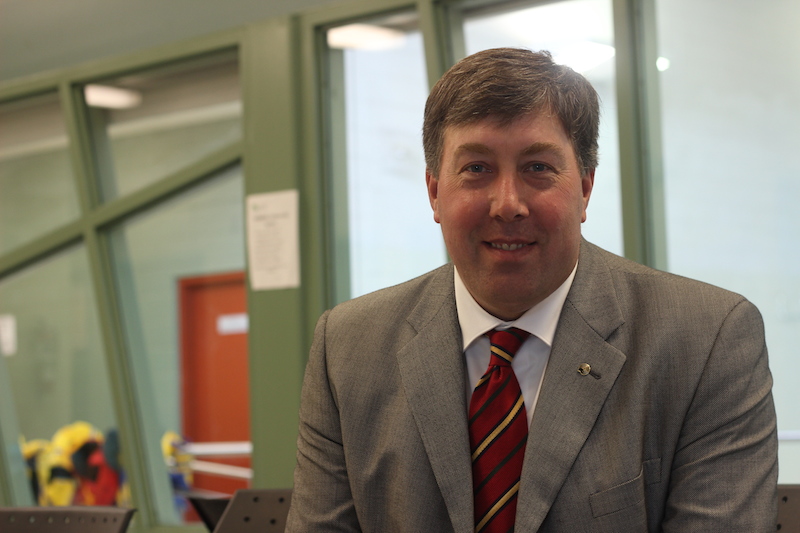 Earlier this week, the United Way of Burlington and Greater Hamilton announced that Hamilton native Jeff Vallentin has been appointed as their new Chief Executive Officer. Before this, Vallentin had a 17-year long career in communications at Hamilton Health Sciences and worked in consulting for some time. On top of that he has a diploma in photography, an undergrad in political science from McMaster, a post-grad diploma in public relations, and a master’s of business administration.

We sat down with Vallentin to talk about his relationship with the city he was raised in, his career and education, and his goals and dreams serving as the new CEO of the United Way of Burlington and Greater Hamilton.

SS: Tell me a little bit about yourself that I wouldn’t find out from a Google search.

JV: Since I was a toddler I grew up in the downtown, Aberdeen area. Now my wife Tracey and I live in Dundas and we’re raising three kids, and that’s the best part of my life—it’s Father’s Day this weekend so that’s great.

My parents separated when I was eleven or so, and that was a unique feature of my growing up. Thankfully, my parents handled that extremely well, and they were always respectful of one another. I have a brother who is only a year older than I am and we’ve been best friends our whole lives, and we remain best friends.

I admired my parents growing up for everything they did in their lives, particularly my mother who remained here in Hamilton, and not only was busy raising two wild young boys as a single parent, but she was someone who was working in the healthcare system and continued to remain in school… So that, I think, had a big part in me sort of figuring out who I was and what mattered.

One of the things that comes to my mind a lot is that they gave my brother and I a lot of latitude. We would come to them with some of those life decisions… and I distinctly remember my parents never really throwing the hammer down, but sitting us down and having that conversation of ‘let’s just talk about the possible consequences of these choices’. And I didn’t know it at the time, but what I now know is that it was brilliant.

SS: And how would you describe your lifelong relationship with this city?

JV: I think as a young person I imagined that I would be doing everything possible to leave here, and live in some greater, better place. But after having traveled around a little bit I discovered that this is the greater place. So I feel very lucky to be able to live my life, and raise my kids and find great career opportunities right here in our community.

SS: What are some challenges you are expecting in this role?

JV: Often when the United Way is talked about, it’s talked about in terms of dollars— in terms of amount, money raised, and so on, and that’s important. But I’d rather think about the amount of impact that we are able to have. So, for Burlington and Hamilton there’s sort of the assessments on needs, and the needs are great… There are somewhere around 70 agencies that are somewhat funded by the United Way program, and many more programs within those agencies. And that to me is a measure of size and scale that is important to look at.

SS: In the press release you said, “momentum is already building”. Tell me a little bit about what you mean by that.

JV: There are people in our community who are looking for ways to be generous with the resources they have, and so I am aware of some of that and I really want to tap into some of that. The United Way has had a very long and distinguished history, but it’s also and organization that is modernizing itself to keep pace with not only the needs and opportunities in the community, but ways to match up together with generous people—new practise around philanthropy, for example. We are still working hard to have strong strategic shared-value proposition opportunities together with the corporations… but there are many individuals and many families across Burlington and Hamilton who also have a significant ability to help make a difference in our communities, and we need to tap into that opportunity a little bit better than we have in the past.

SS: Are big partnerships going to play an integral role for the United Way of Burlington/Greater Hamilton moving forward?

JV: Absolutely. Mohawk, McMaster, City of Hamilton, the hospitals, Hamilton Community Foundation, these are the major institutions in our community and United Way need to be right there with them dreaming about what the future could be. It was a significant part of my work at Hamilton Health Sciences to be connected with these organizations, talking about how things could be better and different and there are some amazing leaders at these organizations today. Combined with the fact that I think the future is really bright for this part of Ontario, it’s an exciting time to be in this particular position.

SS: Before we began talking, you said to someone that works here that you wanted to talk after and have her and her colleagues name one or two dreams they have for the organization. Tell me about that approach.

JV: They know more than I do at this moment. They have dreams and ambitions, and together if we can talk about those things who knows what we can make happen together. I think that’s sort of a good practise to have in life generally. If you have some things that you want to accomplish, and some ideas about your own personal goals… share them, talk about them. For all I know, you could help me with some of the ideas that I have for the future… That’s about connections and communication and dialogue and sharing with each other views and ideas.

SS: After two diplomas and an undergrad, you worked in communications at Hamilton Health Sciences for almost ten years, putting yourself well on your way to very successful communications career; but then you went back to school to get your Masters Degree, after which you remained at Hamilton Health Sciences for another seven years. Why did you choose to go back to school in the middle?

JV: You know, so I’m not done yet. Don’t be surprised if I go back and do something else as well. I think that, for me it’s a wonderful thing, a life of learning.

I distinctly remember being extremely bored in high school. High school for me was not a very good experience. I felt forced there… What I first discovered at my first attempt at college was that I was there by my choice, and I was together with the people that I wanted to be with, and I was doing the assignments that I chose to do. So I took a very different approach to learning at that moment and it stuck with me. I have a bit of an eclectic background getting me to where I am today, but I remember being jazzed at each and every one of these programs. So I will be looking for the next opportunity I have to enrol in a simple evening course or go back and study something that I am interested in—and I hope that for many people.

SS: The United Way of Burlington and Greater Hamilton raises just under $7 million annually. In terms of that number, what is your, let’s say, five-year goal?

JV: There are other communities in Canada who are raising a significant amount more of money than we are, relative to the size of the population and the nature of the economy, so that says to me that there is potential. Having said that though, Hamiltonians and people in Burlington—they are generous. Realistically, we need to add a few or a handful of millions of dollars after seven in five years time. I think it’s very achievable.