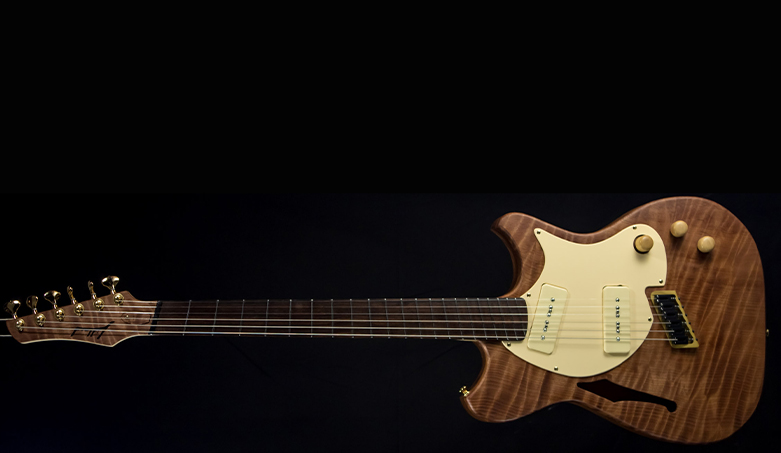 Hamilton fosters a collaborative spirit that creates movements and draws people in. Jay Jillard, a 25-year-old luthier, set up shop in Hamilton partly because he found a selfless community. The City Harmonic is a Hamilton band formed from a movement to uphold the hurting and helpless. They also play one of Jay’s guitars.

They’re not the only ones. The Elwins and Said the Whale play a “Jillard Guitar.” Then there are the hundreds of individuals across Canada and around the world (Australia, France, the U.S.) who have commissioned custom Jillard creations.

Jay built his first guitar in high school. It was heavy, unique, and appealed to certain metal-head persuasions. His friends thought it was awesome. That’s when he started fielding requests for handmade guitars. Now, he builds a run of 15-20 guitars every year, plus as many as 4 custom-designed models made to order.

Until last February, Jay was working out of his parents’ garage in Brampton. When friends invited him to a house show in Hamilton, Jay was amazed.

“It was an eye-opener that live music can be amazing. It can sound good. And it can be intimate but still full.” Jay said.

What really impressed him was the attitude of musicians and music lovers in Hamilton. Everyone was friendly and respected the space, which, in Jay’s experience, was uncommon at house shows.

It became apparent that this wasn’t a one-off, “magical night.” Respect seemed to be a trend in the Hamilton music scene. This, along with Hamilton’s affordable house prices and the emerging entrepreneurial community, made the Hammer Jay’s first choice to set up shop.

He arrived in February and has been blown away by the collaborative spirit he’s stumbled into.

“I’ve noticed that I have a few friends who have recording studios, run record labels, or are just musicians and it’s just like, let’s hang out and let’s make something,” Jay said, “It actually helped the business to learn that collaborative mindset, to just make something for the sake of making something.”

This tendency towards collaboration has been in Hamilton music a long time. In 2009, The City Harmonic formed under the ethos, “Together for the good of the city.” They describe themselves as a “steel-town, blue-collar band” singing “modern hymns.”In 2007, when Hamilton was in the middle of a rough

In 2007, when Hamilton was in the middle of a rough patch, churches from different denominations rallied together. They volunteered with nonprofits, serving downtown while it rediscovered itself. After serving people in the middle of their tension and drama, the volunteers worshiped together. This is the True City movement. This is where The City Harmonic came together.

Since then they’ve produced 3 albums and won several awards, including a Juno in 2013. In 2012, they stood with their bassist to fight cancer into remission. In 2015, they released a documentary about their story and Hamilton’s creative awakening. Success has met this band because of their grip on unity.

When the band met Jay, before he settled in Hamilton, and heard he made guitars, they commissioned a custom Tyrant model made of Poplar, Maple and Wenge.

Hamilton has always been a hotbed for musical talent and appreciation. Gord Downie once told George Stroumboulopoulos that Hamilton was the best place to play live. But what’s really defining Hamilton’s music and creative culture is its collaborative spirit.

When The City Harmonic takes a stage, one of the guitars in their line-up is a white and black Jillard Guitar. The instrument and the musicians are a testament to a city rising from the metal scraps because creatives chose to take part in a sweeping harmony rather than fight for their own solo.