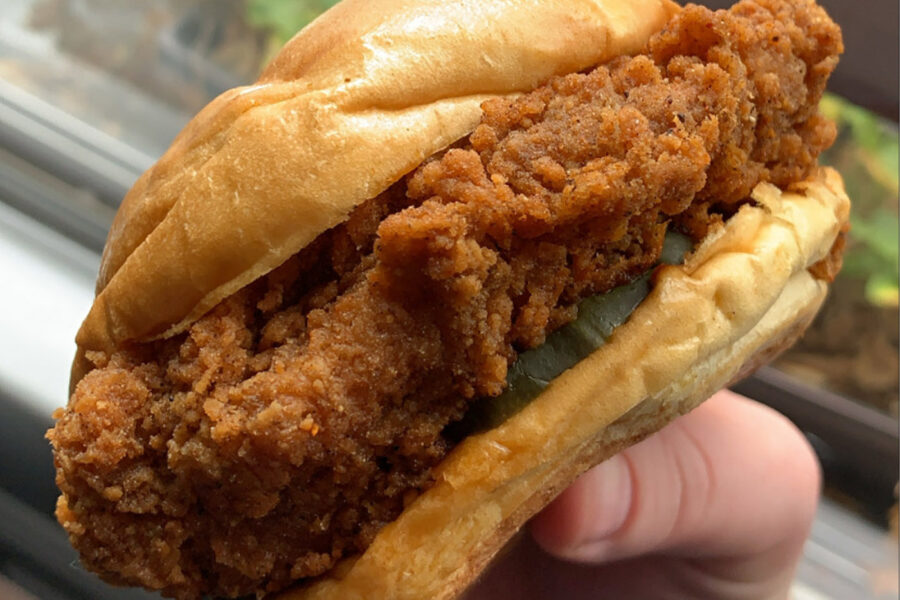 It’s no secret that 2020 was an especially hard year for restaurants, bars, and other food spots all over Hamilton.

With the pandemic forcing small businesses of all kinds to adapt, the hospitality industry has faced its own particular set of challenges as they reckon with greatly reduced dining room capacities, all-out restaurant closures, impacted distribution from food suppliers, and countless other obstacles.

However, small business owners are nothing if not scrappy and resourceful; something that’s been made even clearer by the considerable number of brand new food spots that, despite the pandemic, have opened their doors anyway and been warmly welcomed by Hamilton’s culinary fans.

Here’s our list of the top 10 food spots that opened in Hamilton this past year. 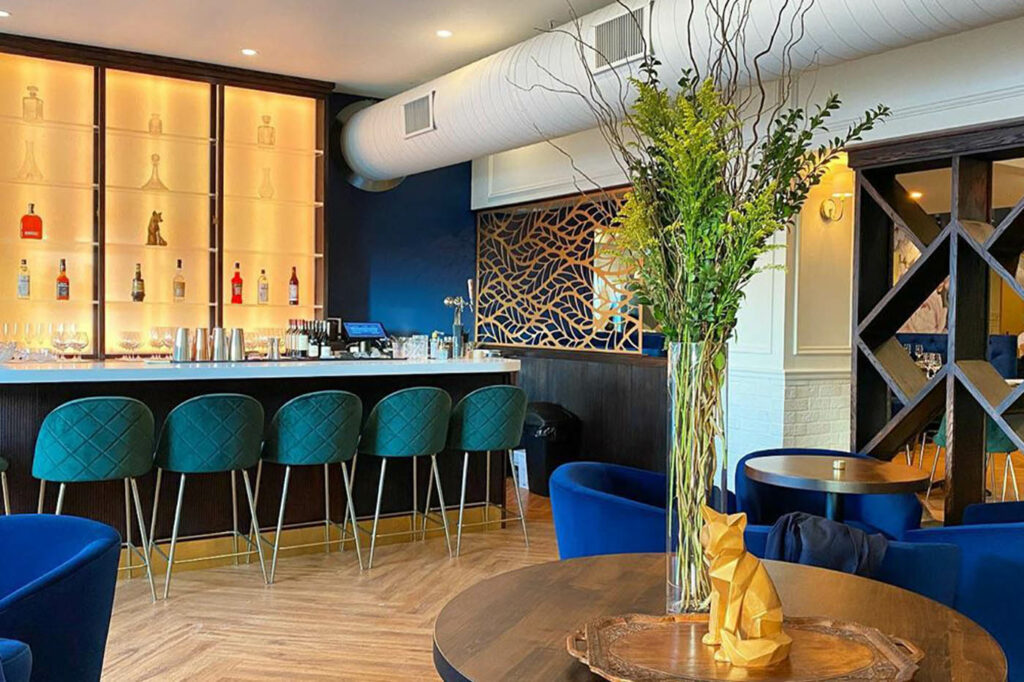 Hamilton certainly has a decent share of steakhouses, but Victoria’s brings a contemporary twist to its fine dining that does things a little differently from the city’s more old school establishments.

Brought to Hamilton by the folks behind popular elevated Italian spot Caro – which itself just opened a second location on James North – Victoria’s sports a menu full of exquisite cuts of steak cooked to your preference, as well as expertly prepared seafood offerings and other fine fare.

Taking up residence in the former home of Rolly Rockets in the heart of the Strathcona neighbourhood, Victoria’s will be a prime spot for special occasions once they’re able to reopen their stunning dining room. 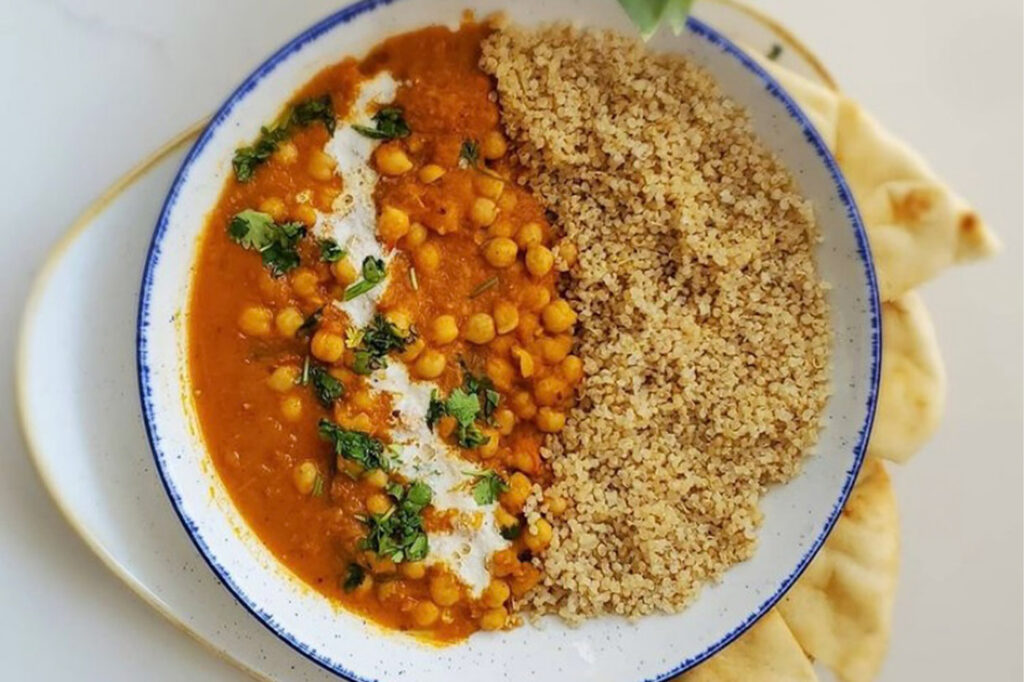 Vegan restaurants are becoming plentiful in Hamilton, and one of the latest purveyors of plant-based goodness takes its inspiration from Indian cuisine for its diverse, nourishing menu.

Open by the corner of Barton and James North in the former home of vegan bakery Lick the Whisk, Sookham’s offerings are all vegan and made from organic and locally sourced ingredients whenever possible.

Though its restaurant interior – which also doubles as a meditation space – is closed to the public for now, locals can still get their hands on a variety of dishes including hearty curry bowls, burgers, soups, smoothies, and more through curb-side pickup or delivery! 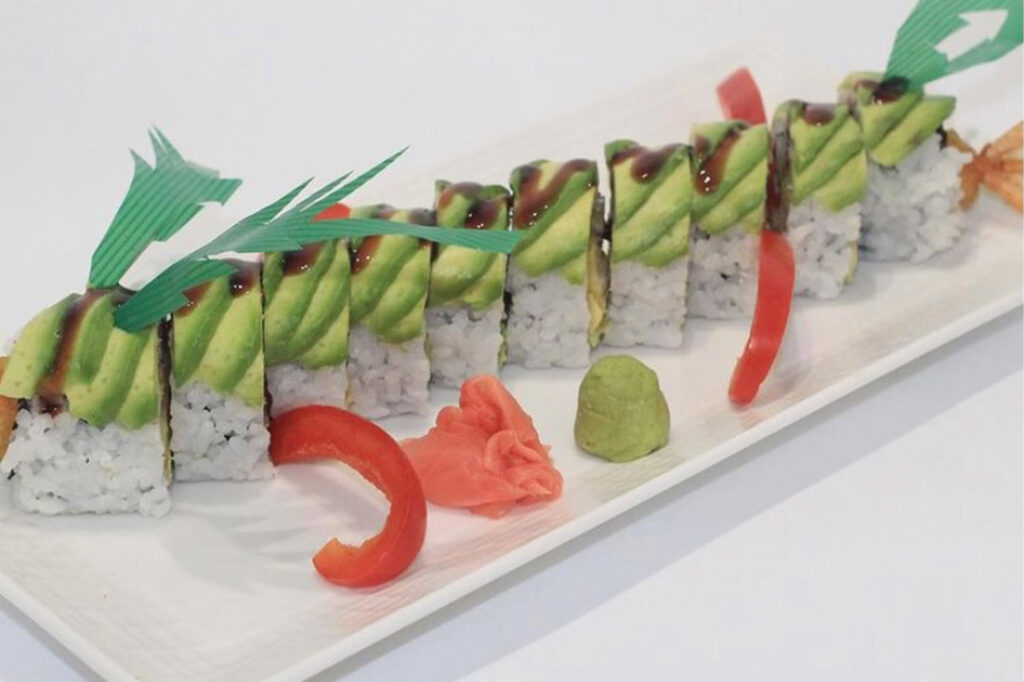 Bridging the gap between all-you-can-eat spots and higher end fare, Sushi Azuki is a tiny takeaway spot on Locke Street specializing in sturdy examples of that classic Japanese dish.

In the former home of Ka’kau Chocolate Company, Sushi Azuki’s menu is loaded with tantalizing options for pretty much any foodie. Rolls with tuna, salmon, shrimp, crabmeat, and chicken are balanced out with some solid vegetarian options, and even a selection of poke bowls. This place only opened about a month ago, but it’s already receiving top marks from the city’s strongest sushi stans. 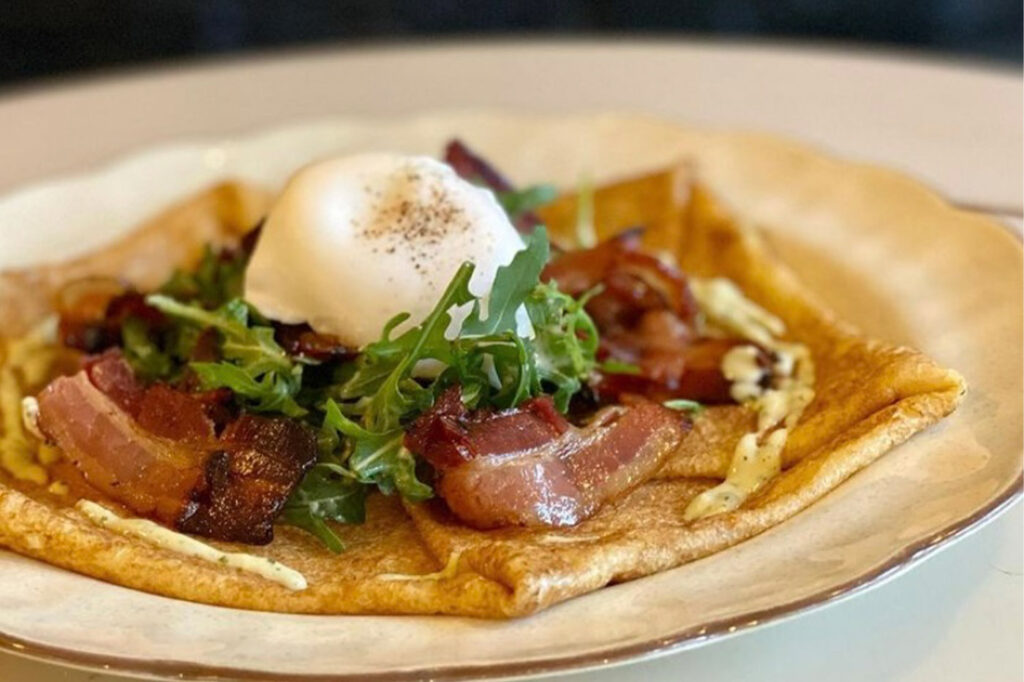 Crepes in sweet and savoury varieties alongside other Parisian-inspired lunch nibbles make the brand new Creperie Verlan stand out as a singular food spot in the city.

A recent addition to Barton Village, Creperie Verlan is building off an existing sister restaurant, La Parisienne Creperie, out in Oakville. Delicate and delicious crepes are made to order and feature fine ingredients such as local ham and Emmental cheese, or salted caramel and chestnut puree.

Short of flying off to Paris for a culinary adventure, the offerings at Creperie Verlan right here in Hamilton are pretty much the next best thing. 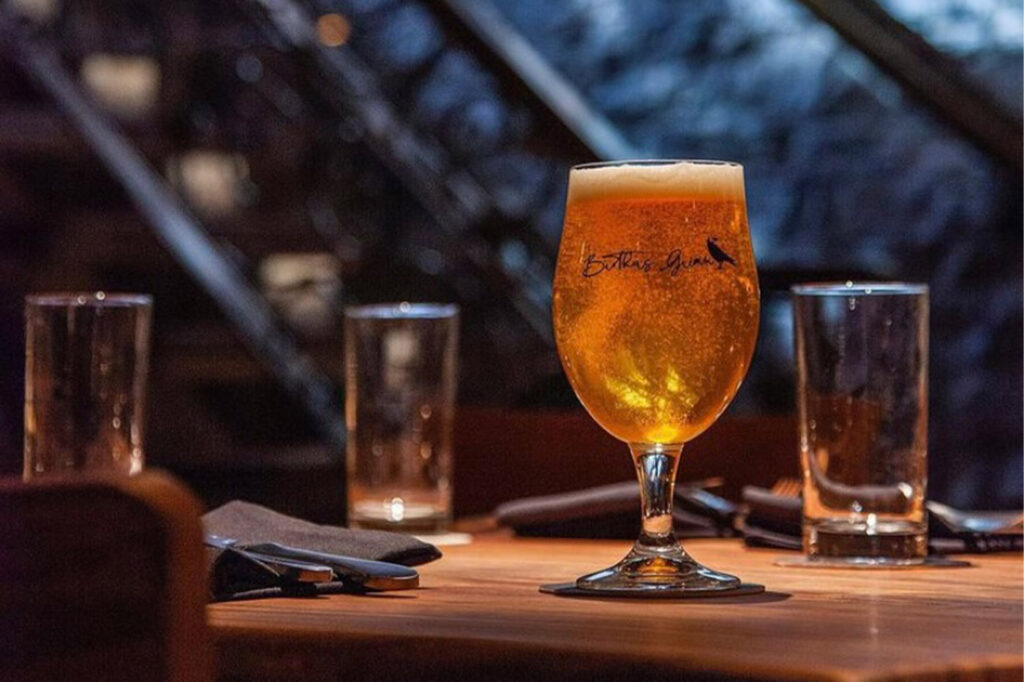 Hear us out: Brothers Grimm Bistro might have the most striking, immersive atmosphere of any restaurant in Hamilton.

Specializing in elevated Euro fusion dishes with a wide variety of offerings, as well as a stacked menu of wine and local beer, Brothers Grimm had only been open briefly before the pandemic shut the world down. That said, the restaurant has already gained a strong reputation among locals and will undoubtedly be a prime destination when it can safely open its doors once again. 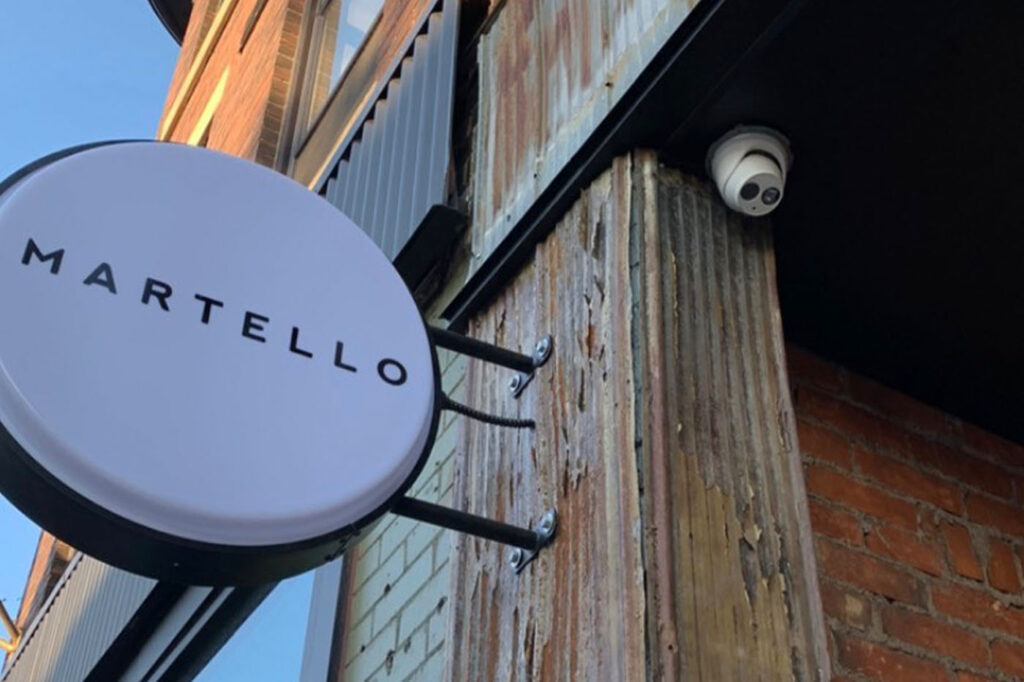 At the corner of James North and Barton now sits Martello, the latest culinary project from the team behind foodie favourites such as Nique and the recently-established H’s Fried Chicken. With an old world, lived-in aesthetic and a beautiful back patio, Martello is a restaurant, meeting place, bakery, and general store all in one.

Locals can expect simple-yet-masterful takes on traditional homemade pastas and Neapolitan pizzas, as well as sourdough and other baked goodies to take home and indulge on. When restaurants are once again safely able to open their doors to the masses, expect Martello to be a major force on the James North strip. 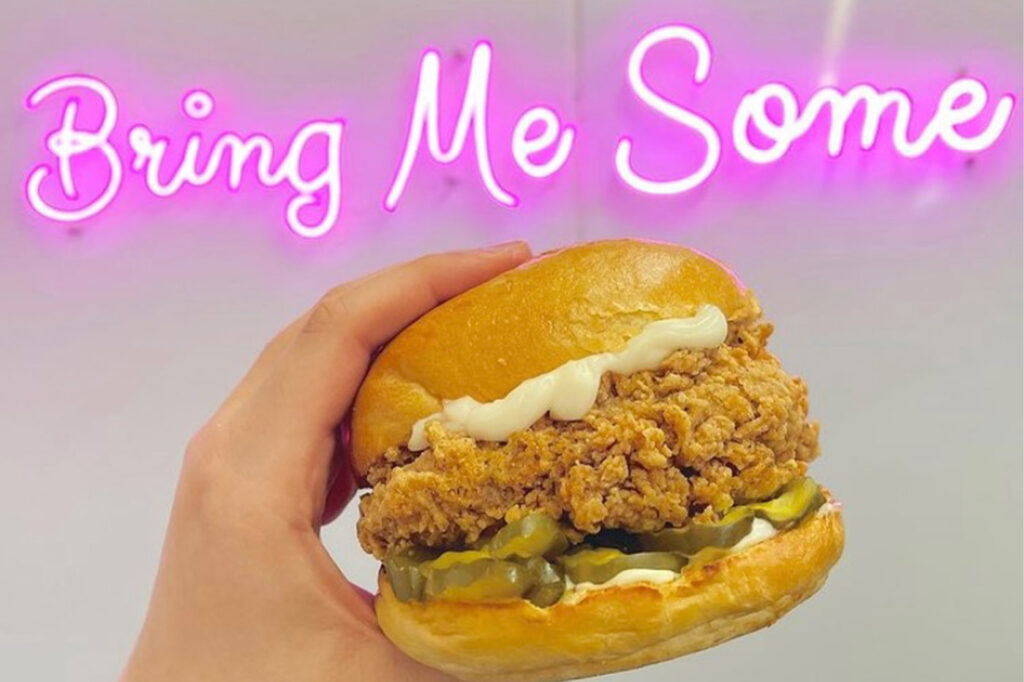 This mighty little fast food spot is already a favourite in the city, even though their menu doesn’t have a scrap of meat or dairy in sight. You heard me right: Bring Me Some is Hamilton’s first all-vegan fried chicken takeaway spot, specializing in massive and wildly flavourful sandwiches that have no chicken in them whatsoever.

Using their own special recipe for a plant-based chicken substitute, Bring Me Some’s brand new stand in the Hamilton Farmers’ Market has already found overwhelming popularity with locals, even earning praises from the non-vegan crowd for their sizeable sandwiches and chicken tenders with the perfect battered crunch.

One prime example from the menu is the Popeyezwho, a simple and veganized take on the famous Popeyes chicken sandwich topped with plant-based mayo and crunchy house pickles. Pro tip: order it spicy for a nicely calibrated kick of heat. 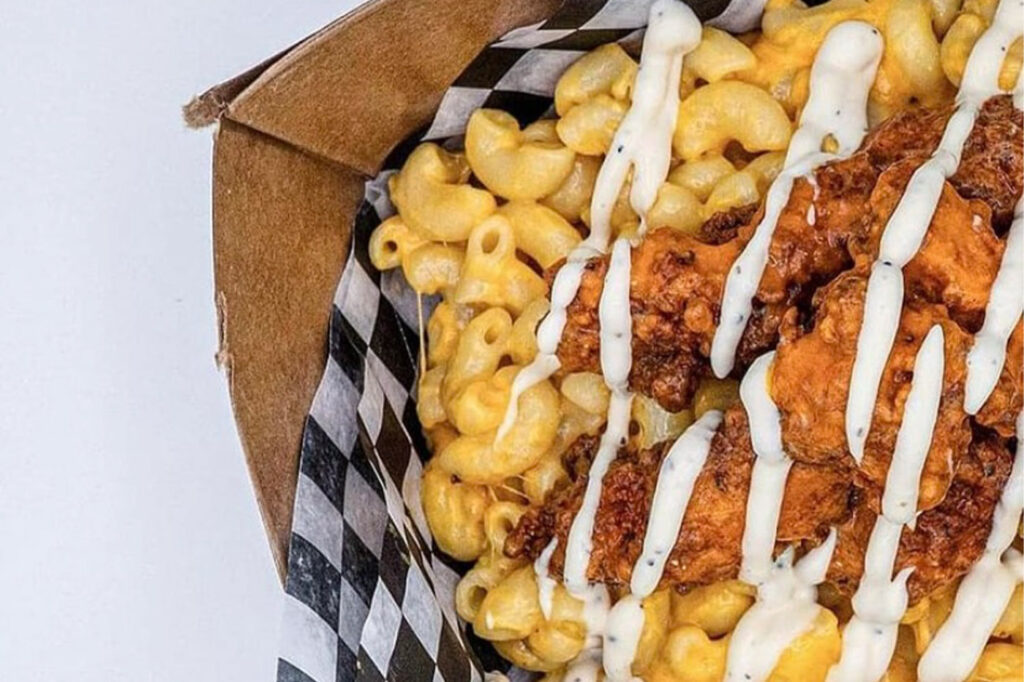 Great food made by great people, The Dirty South’s brick-and-mortar location is already one of Hamilton’s best spots for humble-yet-elevated Southern comfort food.

Building on the success of the enduring food truck of the same name, The Dirty South opened its first restaurant in the cozy former space of The Barton General by the corner of Barton and James North and soon followed it up with a second spot on Concession Street that will eventually become a full-service establishment with a whiskey bar.

But for now, locals can indulge in takeaway dishes such as the beef brisket hoagie, fried chicken & waffle sandwich, or pulled jackfruit mac ‘n cheese among multiple other menu options that have something for everyone from vegan to carnivore. It doesn’t get much better than this, folks. 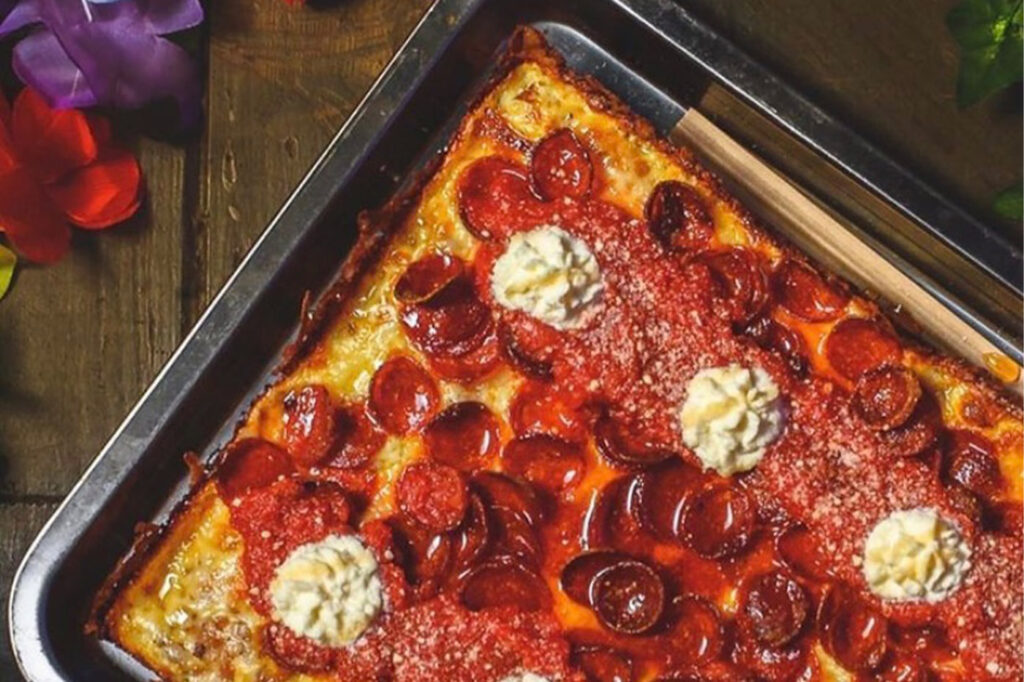 If you haven’t had your first taste of MaiPai’s pizzas yet, what are you even doing with your life? In a city with no shortage of pizza options, MaiPai Tiki Bar – a project by Salar Madadi of Hamilton’s popular Pokeh – readily stands out for its commitment to Detroit-style square pies that are thick ‘n delicious with iconically crispy, cheesy edges.

Though MaiPai’s gloriously immersive Barton Street tiki bar is closed for the foreseeable future, their pizzas can be preordered for curb-side pickup and are loaded with diverse and playful toppings.

Even a simple Detroit Red Stripe with brick cheese and red sauce will knock your socks off, but MaiPai gets creative with selections like the Secret Pickle Pizza, loaded with house pickles, bacon, dill, and garlic aioli; or the Do You Wanna?, which is topped with Nduja sausage, fig marmalade, basil, and ricotta.

The pies are a pricier option compared to other local pizza places, but trust us when we say they’re more than worth it. MaiPai Tiki Bar is a delicious slice of paradise right here in Hamilton. 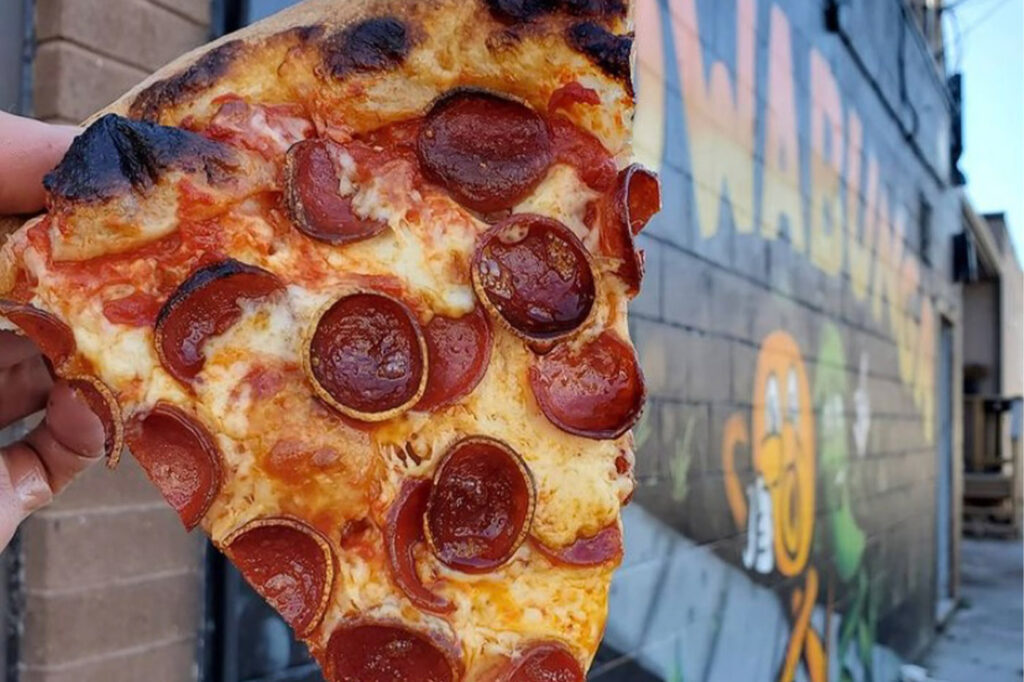 Though still a baby compared to Hamilton’s other mainstay pizza places, to say Cowabunga Pizzeria hit the ground running would be an understatement.

Already garnering a fevered reputation amongst local lovers of all things saucy and cheesy, Cowabunga brings together the kitchen expertise of folks coming from beloved spots including Shorty’s Pizza, Cima Enoteca, and Dundas’ famous Quatrefoil. With these heavy hitters joining forces, Cowabunga is being hailed as some of the best pizza in the Greater Hamilton Area, even seeing some folks drive in from outside the city for a taste.

The classic cheese or pepperoni pies alone are already enough to wow, but Cowabunga has no shortage of inventive options on their menu. A pizza like the 1Up may not look like much, but its harmonious marriage of truffle cream, honey, smoked Maldon salt, white truffle oil, and chilli flakes will leave you thinking about it for days.

Currently available for preorder only, Cowabunga Pizzeria is usually sold out hours – or sometimes days – in advance, and with good reason.

Looking to explore more LOCAL restaurants? Then be sure to explore our search page!