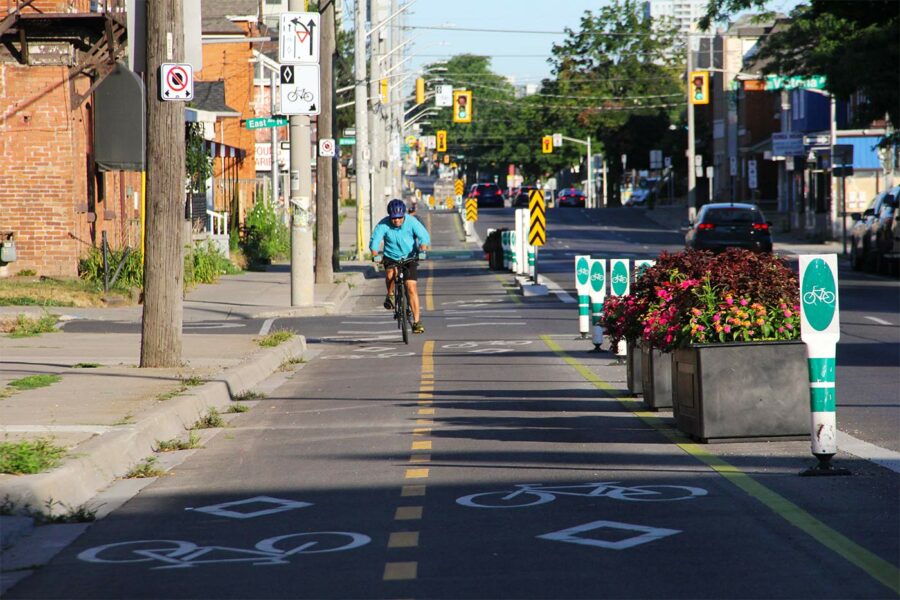 Brought to you by Forge & Foster Investment Management.

There’s a vehicle that is currently revolutionizing local travel, both in Hamilton and worldwide.

It’s smaller than a Smart Car. The maintenance is minimal. It won’t soak you for $50 of gas money every week. Riding it isn’t just good for the environment; it’s good for you.

There’s no denying it: bicycles are back and better than ever, and their popularity in urban centres like Hamilton is only growing stronger.

Part of this new surge of cyclists can be attributed to the current unprecedented realities of the COVID-19 era. As car-less commuters seek safer ways of getting around during the pandemic, bicycles have stood out as a compact, eco-friendly, reliable, and affordable mode of transportation that not only cuts down on carbon emissions, but also provides the safety and flexibility needed to navigate a city in the modern era.

Nowadays, Hamiltonians can’t get enough of these timeless two-wheeled transporters, and there’s no stronger evidence for that than the citywide backlash that emerged as SoBi, the city’s popular bikeshare program, suddenly faced possible extinction after its parent company, Uber Inc., announced that it would be halting operations and maintenance of the program by June of this year.

With SoBi’s clock suddenly ticking loudly, a swift community uprising – which included action from city staff, local advocacy group Cycle Hamilton, and a growing list of over 26,000 local bike share users – ended up raising enough money through fundraising to revive SoBi and support it for at least the next year under the operative hand of not-for-profit group Hamilton Bike Share.

Now, with SoBi bicycles back on the streets and ridership on the upswing, Hamilton is doing more to support a bike-forward vision for the city’s transportation infrastructure.

As the COVID-19 era sees more and more people prone to pedalling their way around, the city is investing just under $50,000 into improving its existing bike lanes with the addition of measures such as bumpers, curbs, and barriers that will keep cyclists safely separated from vehicular traffic.

The construction of the upcoming Jay Keddy Trail along the Claremont Access – a new multi-use trail that will connect cyclists and pedestrians through a continuous route between the escarpment and lower city – is a prime example of City initiatives being put to work.

Pegged at $6 million, construction for the project began July 6th and will open by November, both unifying our city’s geographical elevations and providing some much needed safety barriers for cyclists and pedestrians alike. In fact, the trail pays tribute to Jay Keddy, a cyclist who was killed by a motor vehicle while riding up the Claremont access in 2015.

There’s even the possibility of an extensive, bidirectional bike lane getting temporarily added on a stretch of King Street West between Locke Street and Highway 403; and if bicycles become even more popular in the near future, it’s not unlikely we’ll see Hamilton become increasingly bike-friendly as time goes on.

For prominent Hamilton cycling advocates like Jay Krause, who co-chairs local group Cycle Hamilton, the reasons for a rise in biking are clear; especially relative to this particular moment in time.

“It has been clear that COVID-19 has been a massive driver for increased numbers in walking and biking trips,” says Krause. “Early on, the City reported massive drops of 60 to 90% in public transit and driving & parking numbers, while cycling trips were stable.”

However, according to Krause, the health implications of cycling go beyond simply avoiding potential exposure to COVID-19 on other modes of local transportation; they’re also a key part of the new ways countless urban residents are adjusting to life and self-care in the middle of a pandemic.

“I live in a small apartment in downtown Hamilton with no outdoor space and work from home full-time. Being able to get out on my bike has been an essential part of my new routines to maintain my physical, mental, and emotional well-being,” he explains.

Those health implications are even larger than some may immediately realize. In fact, a report published this year by Toronto Public Health explains that around $1.6 billion of Canada’s annual health care costs are directly related to health issues stemming from physical inactivity.

With cycling shown to reduce the risk of potentially fatal conditions such as cancer, stroke, diabetes, and cardiovascular disease, as well as improve general physical health & wellness, the impact of a rise in biking could potentially save Canada’s healthcare as much as $150 million annually.

This trend isn’t just region-wide or nationwide, either: the cycling revolution is becoming a worldwide phenomenon, with cities across Canada, the United States, United Kingdom, Australia, Germany, Hungary, and beyond reporting significant spikes in cyclists for 2020 and responding by pouring resources into building cycling infrastructure.

As the world adjusts its approach to transportation, places like Hamilton can keep the wheels turning by investing further in bike lanes safely separated from vehicular traffic, ensuring the city’s bike network is properly maintained and usable during the harsher winter months, and even incentivizing biking through measures such as reducing insurance premiums for cyclists or tax deductions for related purchases.

Hamilton has lots of work to do before any of this is made a reality, but local cycling advocates like Krause believe the impact could be substantial.

“Our top priority remains developing a protected and connected cycling network,” he says. “In the short term, there is a massive opportunity for the City of Hamilton to follow the lead of cities such as Toronto, Brampton, Montreal, and now countless others, which have undertaken meaningful initiatives to rebalance streets and find opportunities to develop new infrastructure to meet the immediate need and will continue to pay dividends in the long-term.”