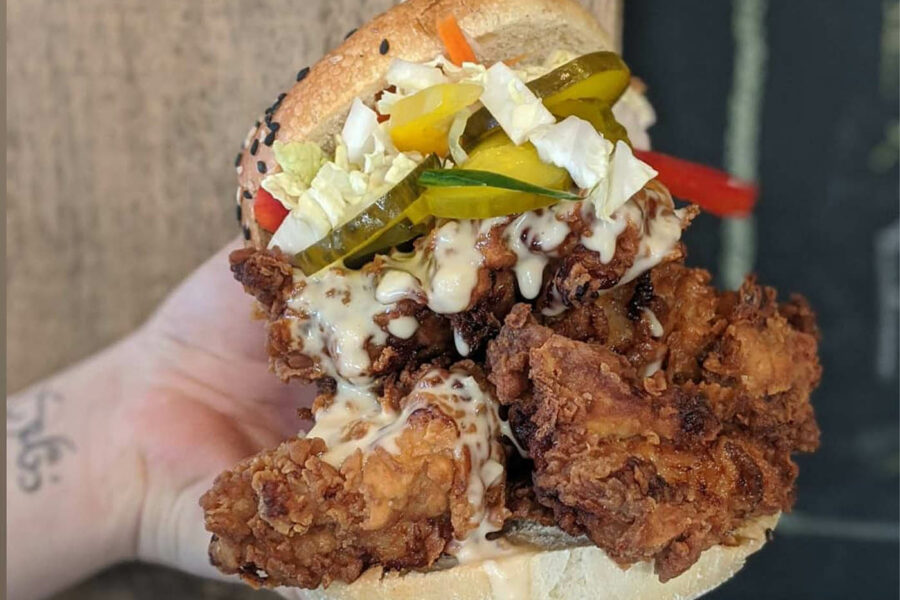 Fried chicken sandwiches are on the rise in Hamilton, and the reason is clear: they’re freaking delicious.

We’ve been on a tasty quest to track down some of the city’s best and brightest when it comes to slabs of crispy, juicy, perfectly seasoned fried chicken between buns, and we’ve managed to cull a list of our favourite sandos in the Hammer from a wide variety of restaurants and food spots.

Without further ado, here are our top 10 fried chicken sandwiches in Hamilton. 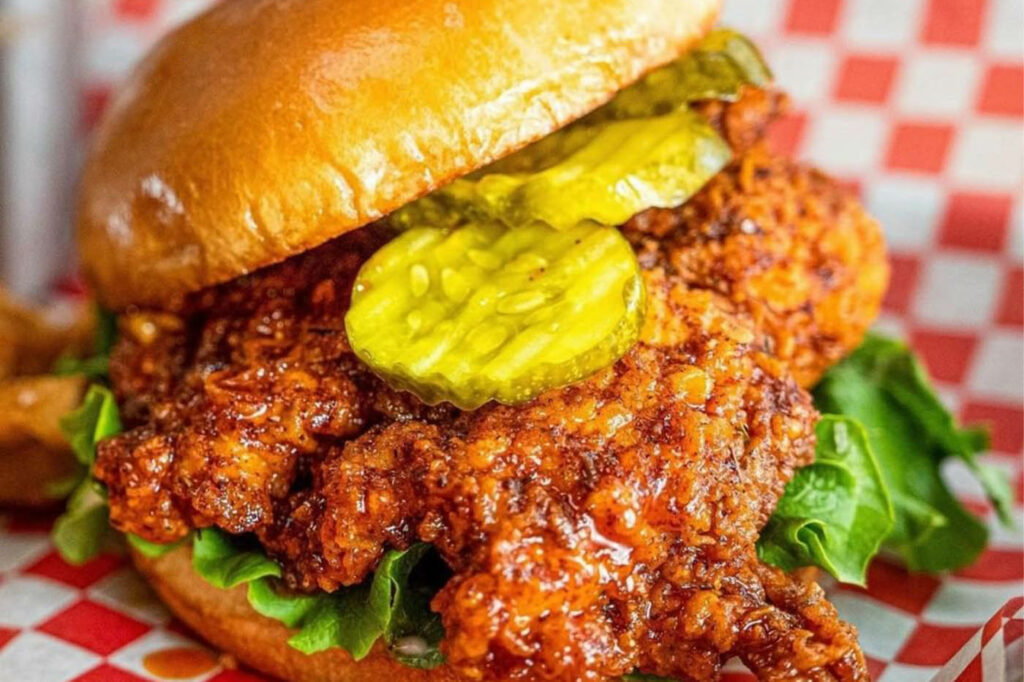 This ‘tasty as cluck’ chicken spot on the King West strip is all about the bird, with a menu that features chicken in poutines, tacos, salads, and more.

Of course, they’ve also got a strong range of fried chicken sandwiches on offer, from Nashville Hot to Korean-style to Buffalo. Served on brioche with toppings like lettuce, pickles, red onion, cheese, and house-made sauces, you’d be hard-pressed not to find an option that tickles your fancy at The Coop. 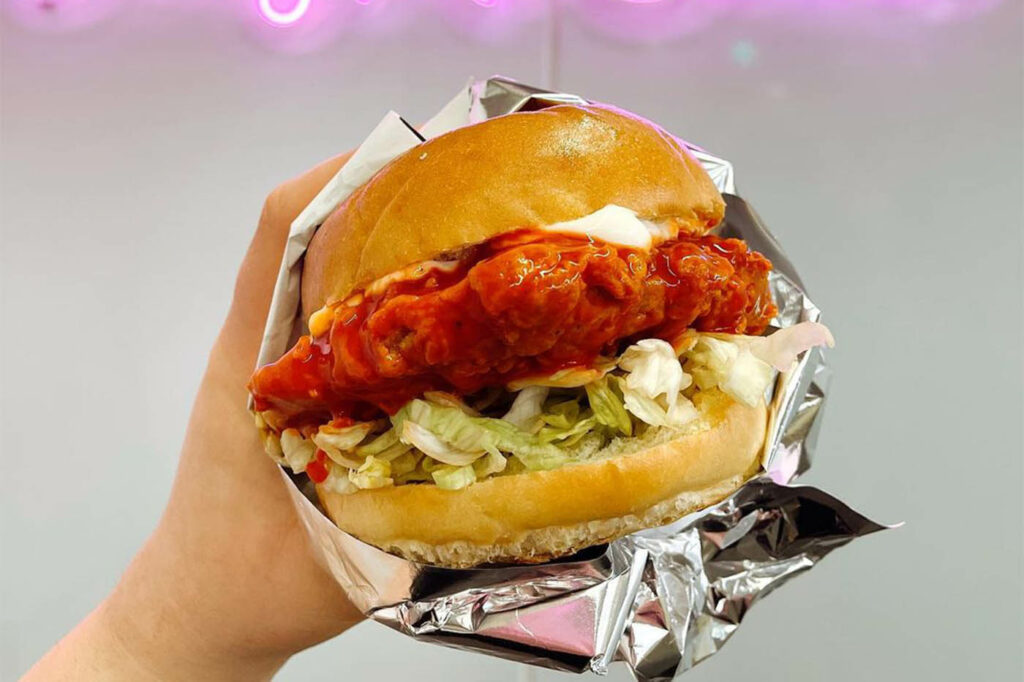 This new takeaway counter nestled in the Hamilton Farmers’ Market is surely the most unique option on this list for one simple reason: their fried chicken sandwiches don’t feature any chicken whatsoever.

You heard me right: Bring Me Some is Hamilton’s first all-vegan fried chicken takeaway, offering up flavourful, well portioned, and deeply satisfying fast food with no meat or dairy in sight.

Using their own unique plant-based chicken stand-in, Bring Me Some has crafted a rangy menu of sandwiches including the Popeyezwho, which offers a vegan-ized take on the popular Popeye’s chicken sandwich; or the ‘Damn Girl, Yous a Pineapple’ that’s topped with glazed pineapple, smoky BBQ sauce, green onions, and cilantro.

This relatively young spot is already immensely popular with Hamilton foodies; and when you taste their food, it’s not hard to see why. 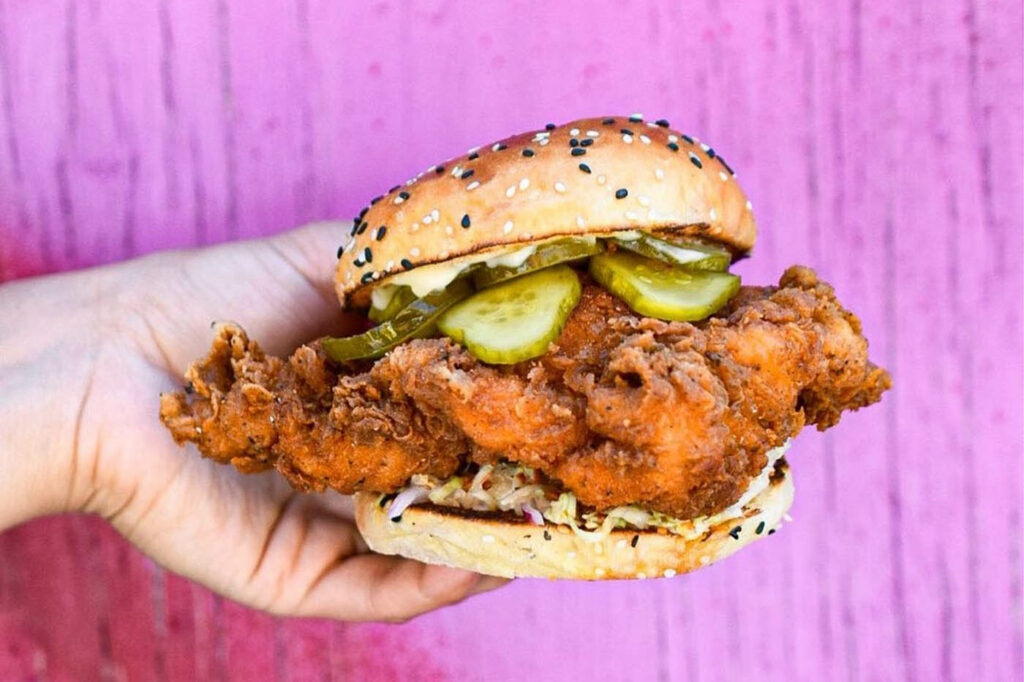 Hamiltonians mainly think of HAMBRGR for their, well, hamburgers; but did you know they also make a mean fried chicken sandwich?

This foodie staple – with ridiculously popular locations on King William Street and Ottawa Street – also has some chicken sandos on their sizeable menu, loaded with the kinds of inventive toppings HAMBRGR is known for. 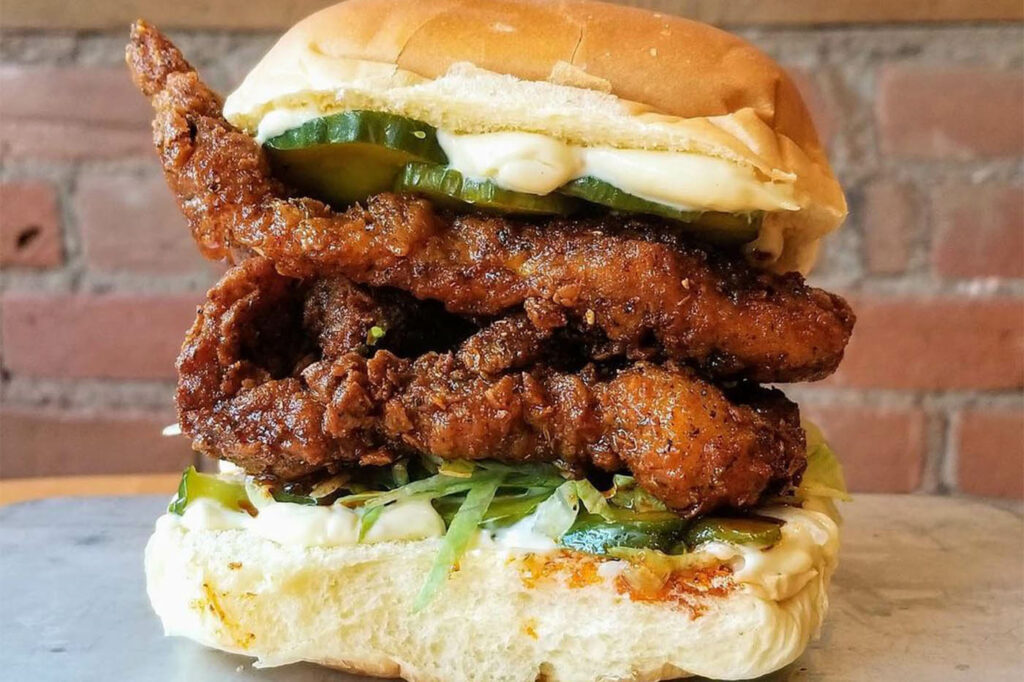 This King William kitchen is one of Hamilton’s culinary gems, with a reputation that spans across the country for its seasonal, chef-driven menu.

So, it stands to reason that Berkeley North’s take on the fried chicken sandwich is more than worthy of attention. Buttermilk fried chicken is tossed in a choice of BBQ, jerk, or buffalo sauce, then topped simply and perfectly with house garlic mayo, pickles, and iceberg.

It’s a teensy bit pricier than the average fried chicken sando; but with the quality Berkeley North is known for, it’s well worth the extra buck or two. 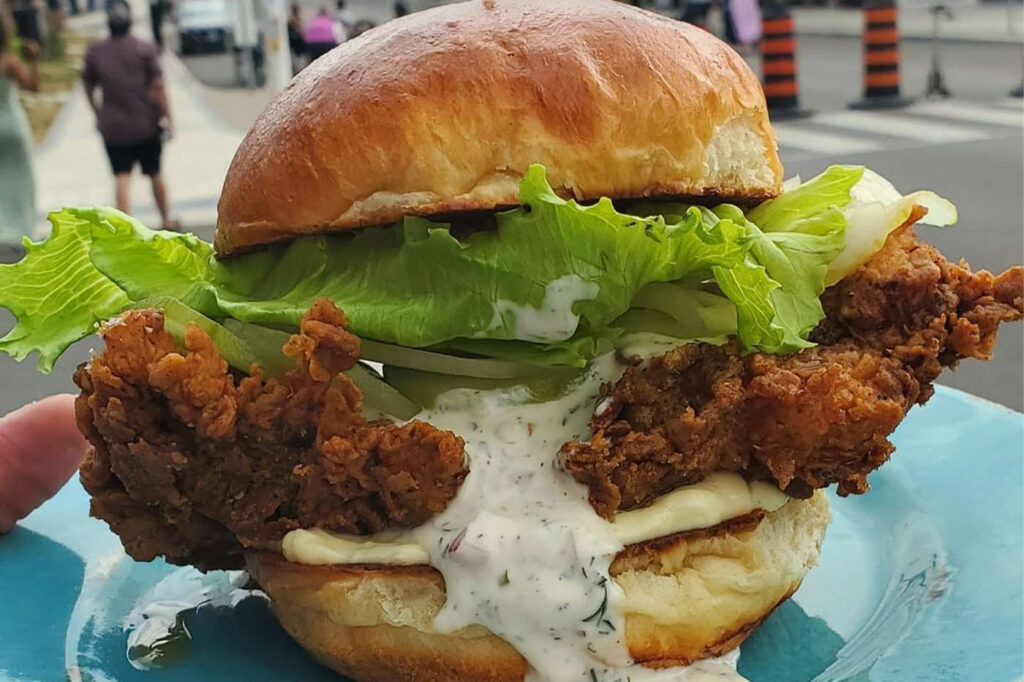 Locke Street’s enduring bar and Belgian-style gastropub is as renowned for its elevated menu as it is for its dynamic, rotating selection of local and international craft beer.

If you’ve had the food at Brux House before you know what you’re in for here (fact: they share a head chef with Dundas’ exquisite fine dining bistro Quatrefoil). I’ll say no more. 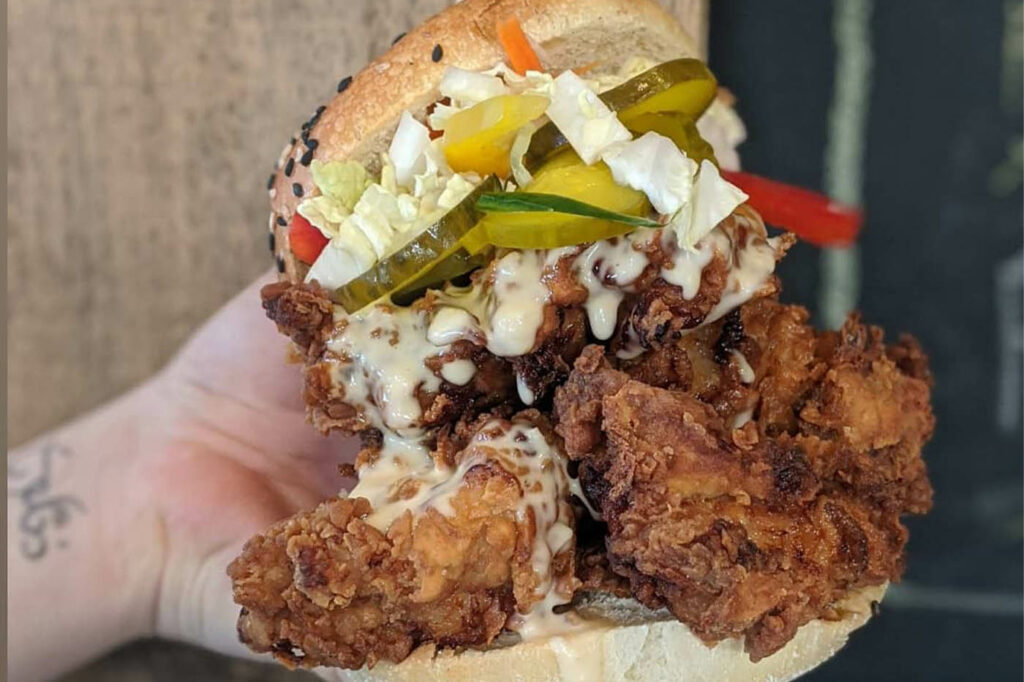 This little sandwich shop is one of the east end’s favourite food spots, offering up sizeable made-to-order sandwiches with quality ingredients and sides such as salads, fries, and homemade mac & cheese.

In the midst of pulled pork and hot beef sandwich offerings lands Tall Tree’s own fried chicken sandwich, which is absolutely massive (seriously, it’s huge) and topped with special sauce, pickles, and slaw. 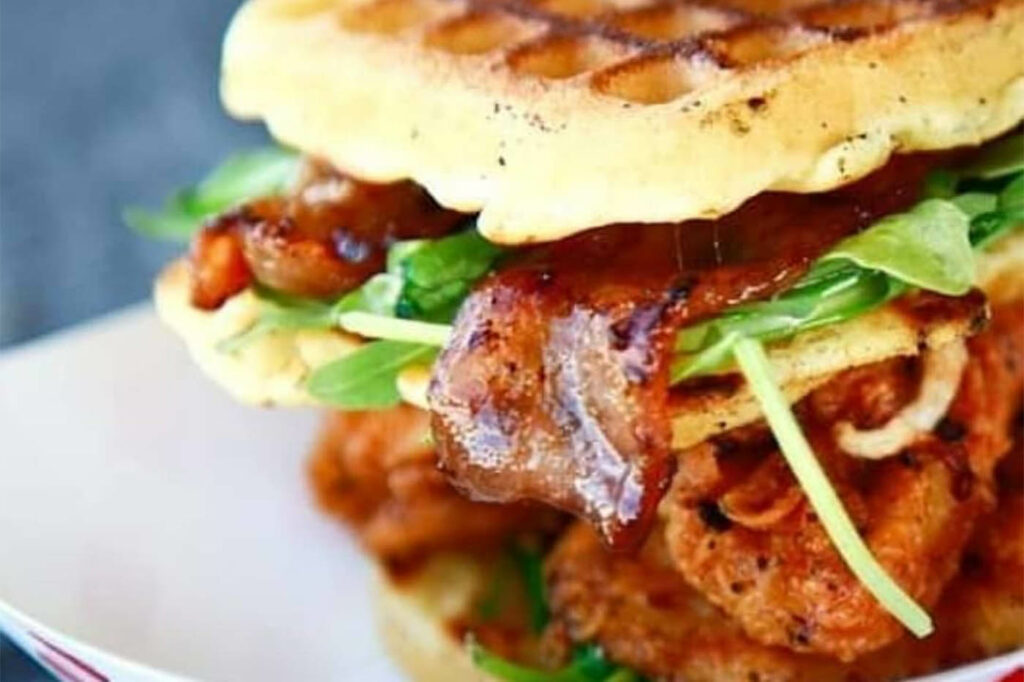 No surprises here: The Dirty South is one of Hamilton’s best spots for fresh, elevated, and playful Southern-style eats.

A wildly successful food truck soon spawned two brick & mortar locations: one on Barton Street, the other on Concession. But no matter where you get your fix, The Dirty South’s delicious menu does not mess around.

Their unique fried chicken sandwich, called the Dirty Southern Love, heaps Louisiana fried chicken, maple bacon, arugula, maple syrup, and buttermilk ranch onto freshly made waffles in the place of buns. It’s as delicious as it is creative. 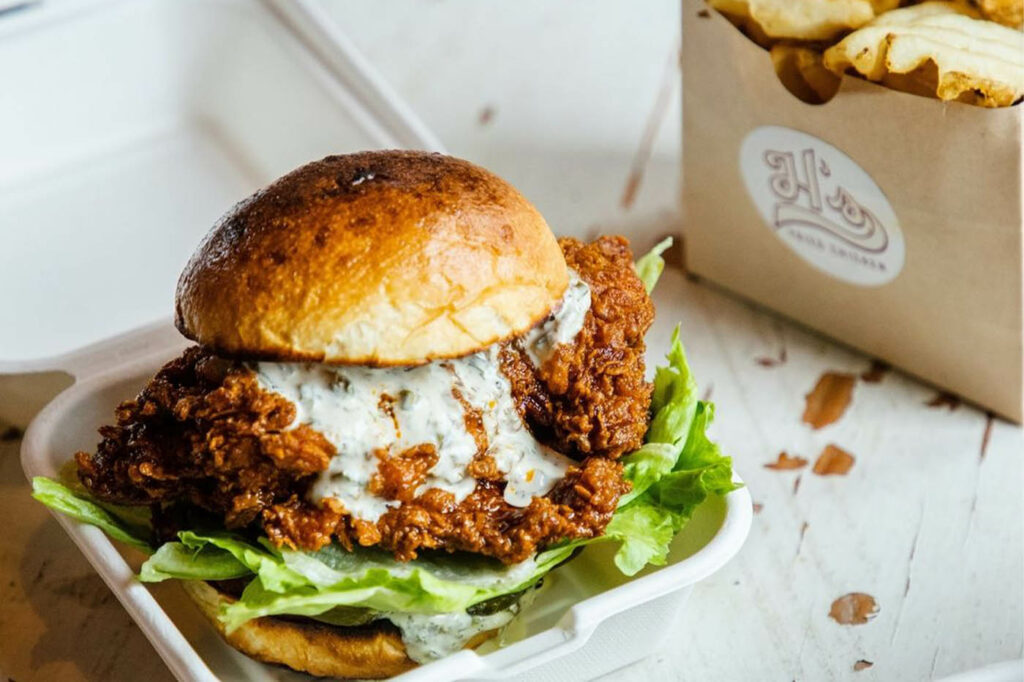 A project by the prolific Harrison Hennick and JM Turenne of Nique Restaurant, H’s Fried Chicken is currently a ghost kitchen operating out of Nique’s kitchen just off of James North.

Billed as “kids’ food for adults,” H’s Fried Chicken specializes in elevated, chef-driven fried chicken sandwiches customizable with your choice of toppings or available in readymade creations such as the ‘From Tennessee with Love’ which features Nashville hot chicken with Jack Daniel’s honey and house ranch; or the KFC, which pairs Korean-style chicken with pickled daikon, house-made kimchi, and scallions.

Grab some of H’s delectable waffle fries on the side, and you’re all set for a wholly satisfying food experience. 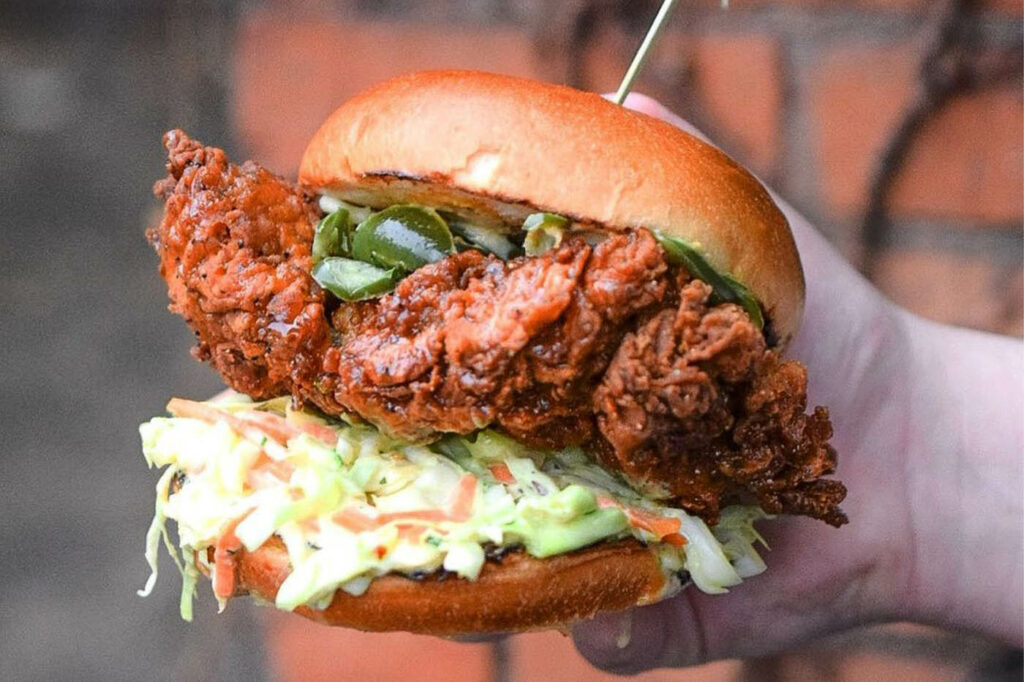 Though Matty’s Hot Chicken is currently available for takeaway only, some near-future plans are underway to open a full restaurant on the Locke Street strip! 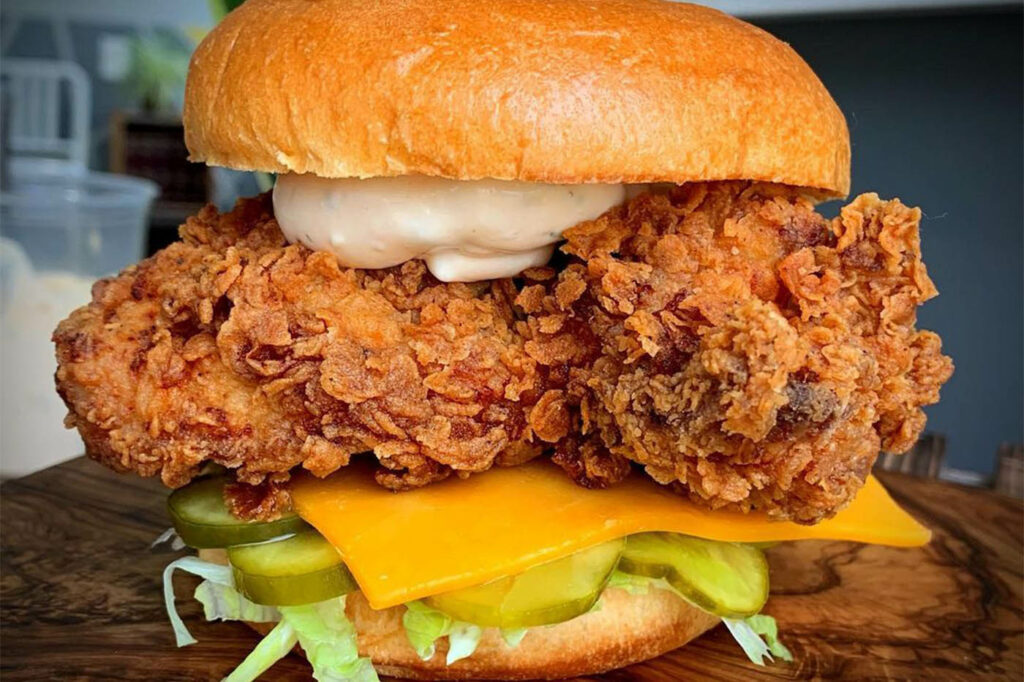 A tiny takeaway spot located in Mount Hope and steps away from the Hamilton International Airport, The Pigeon is well worth the drive for their incredible buttermilk fried chicken sandwiches that feature an absolutely perfect ratio of protein to toppings to bun.

The original sandwich with ranch, pickles, and iceberg is fantastic on its own, but The Pigeon also offers some more creative variations such as The Mac, which mimics a McDonald’s Big Mac with Russian dressing, cheddar, pickles, onion, and iceberg; or the BBQ Bacon Cheddar with bacon, cheddar, BBQ sauce, and chipotle mayo.

Looking to explore more LOCAL fried chicken places? Then be sure to explore our search page!