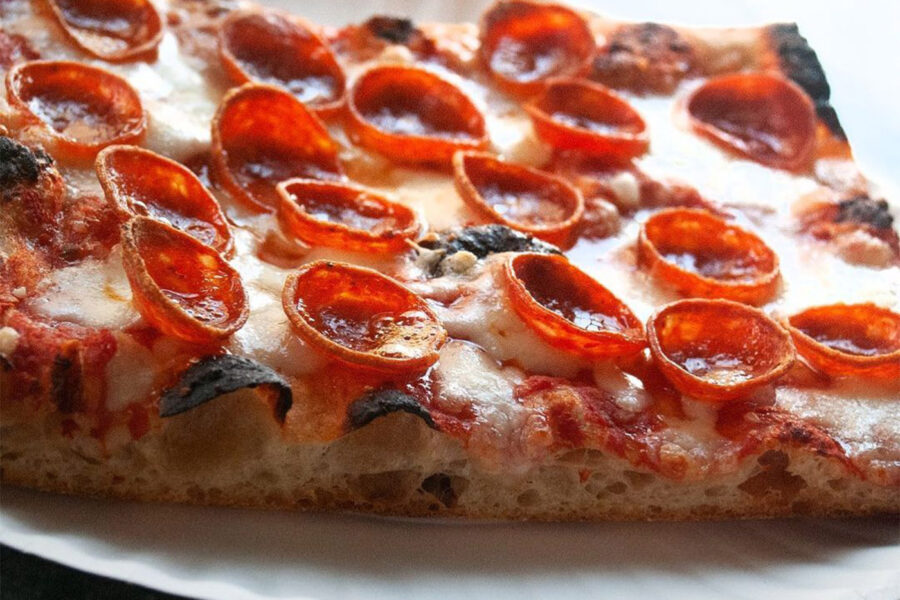 If you don’t like pizza, are you even a human being?

Amid Hamilton’s ever-growing culinary scene, the city remains particularly notable for its sheer quantity of pizza places with enough variety that there’s something for every budget and palate, from no-nonsense neighbourhood joints to higher-end bougie offerings.

Culling a list of our 10 favourite pizza spots in Hamilton was no easy task, but we’ve tried to find a balance of older mainstays and new & noteworthy spots in a wide variety of styles and price ranges. Without further ado, here’s out 2022 list of the 10 best pizza spots in the Hammer! 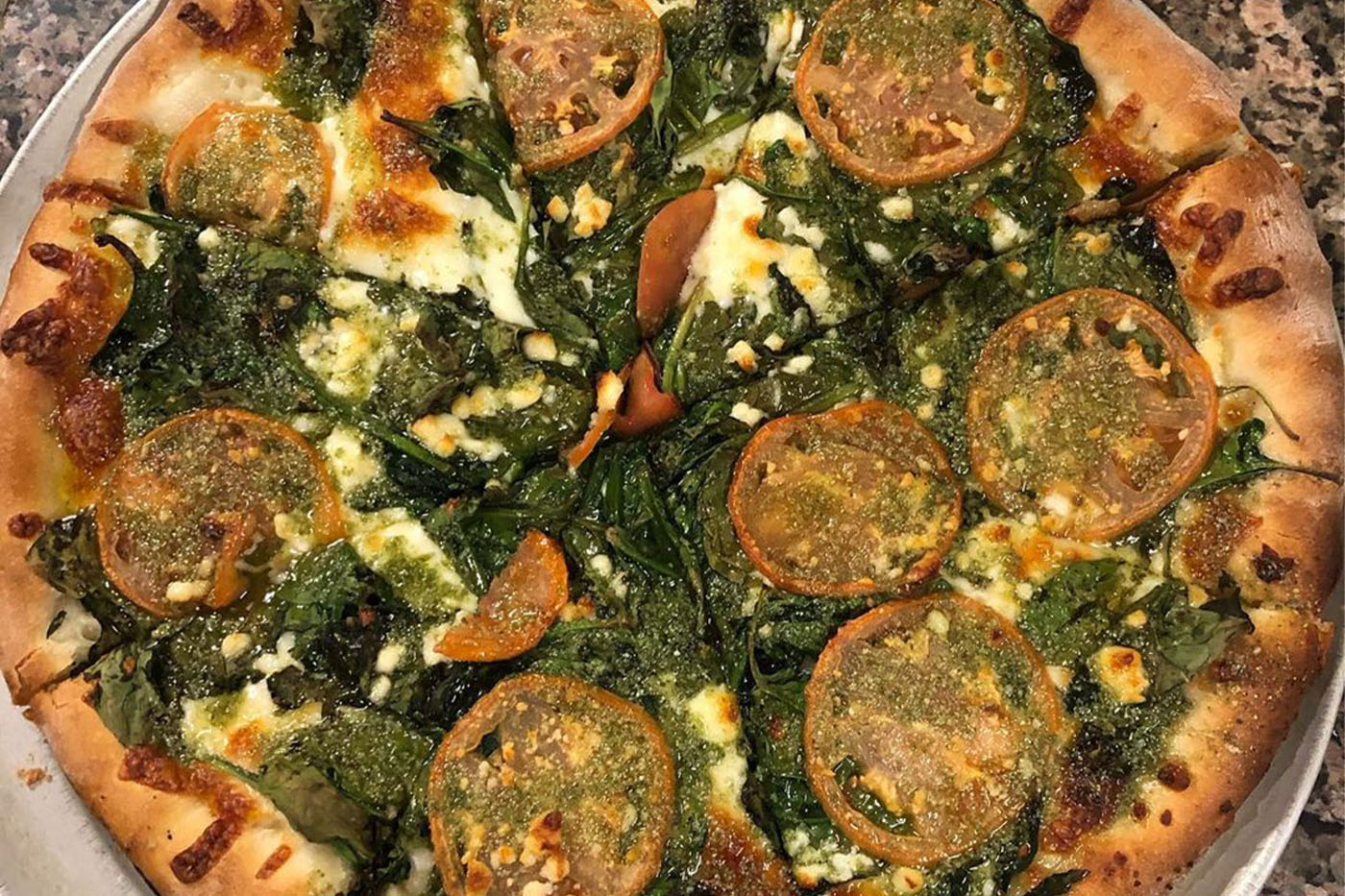 The very definition of a Hamilton classic. A longstanding subterranean spot for humble, no-nonsense Italian eats for the past 30 years, Bronzie’s Place has a loyal fanbase and a reputation for homemade pastas and pizzas that are as flavourful as they are affordable.

Though Bronzie’s mountainous plates of pasta are always a major draw, the pizza here also gets top marks, with well-loved creations like Under the Tuscan Sun: a riff on the Margherita pizza that’s topped with house-made pesto, ripe tomatoes, feta cheese, and spinach. With other in-house specials as well as the option to build your own pie, Bronzie’s has readily earned its enduring popularity. 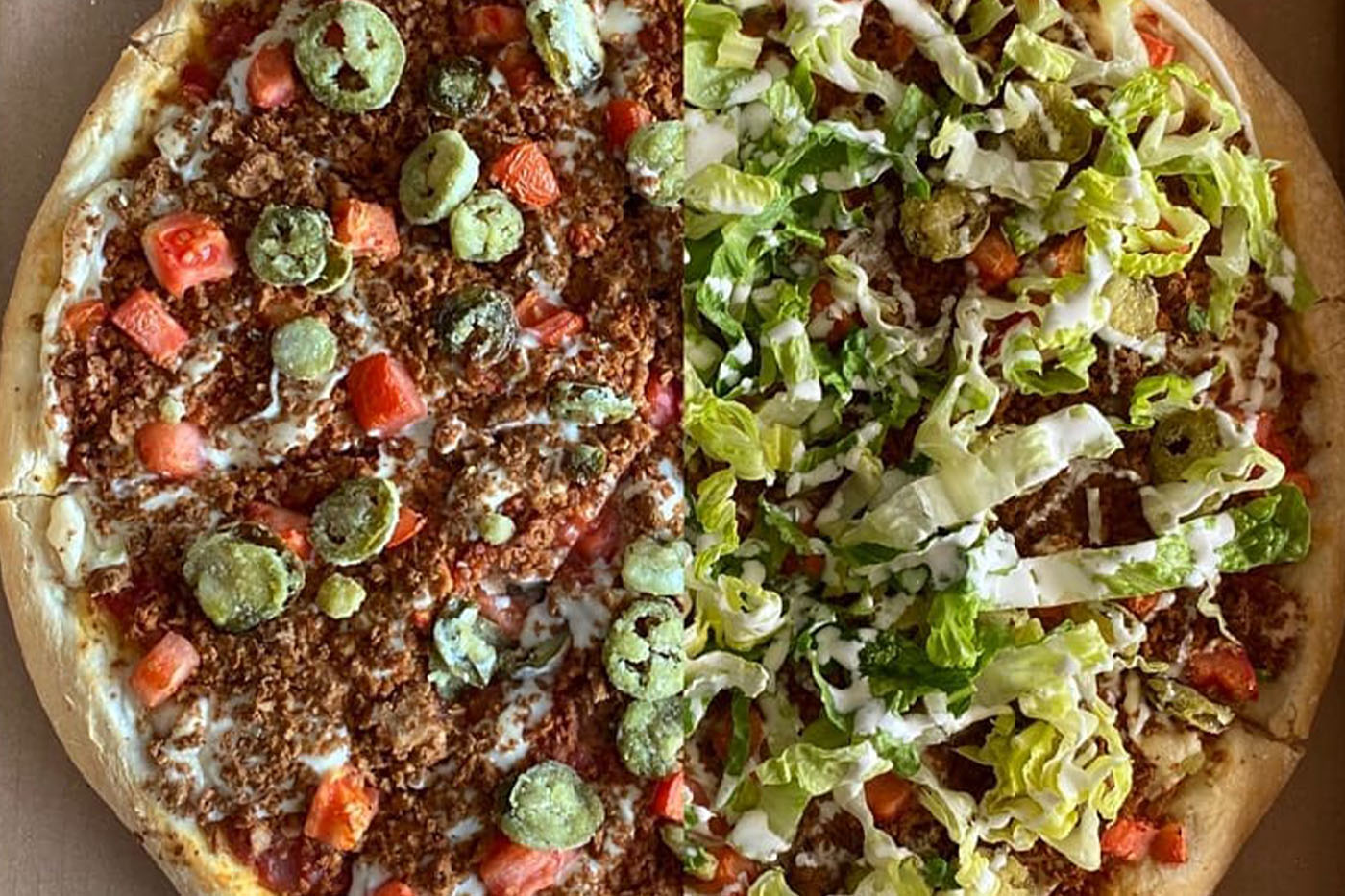 Rise Above Pizzeria is easily one of the city’s most unique spots for a pie, mainly because every single pizza on their menu is 100% plant-based.

But even if you’re not vegan, there’s plenty to love about Rise Above’s meatless, dairy-less pizza creations. A sister restaurant to the vegan comfort food café of the same name in St. Catharines, Rise Above Pizzeria knows how to make a pizza that holds its own amongst many other options in town, and does so without the use of any animal products.

Rise Above also serves some pretty delicious vegan wings made out of seitan: a broth-boiled wheat gluten product that plays the part of chicken, smothered in homemade wing sauces like buffalo, barbecue, or maple garlic. 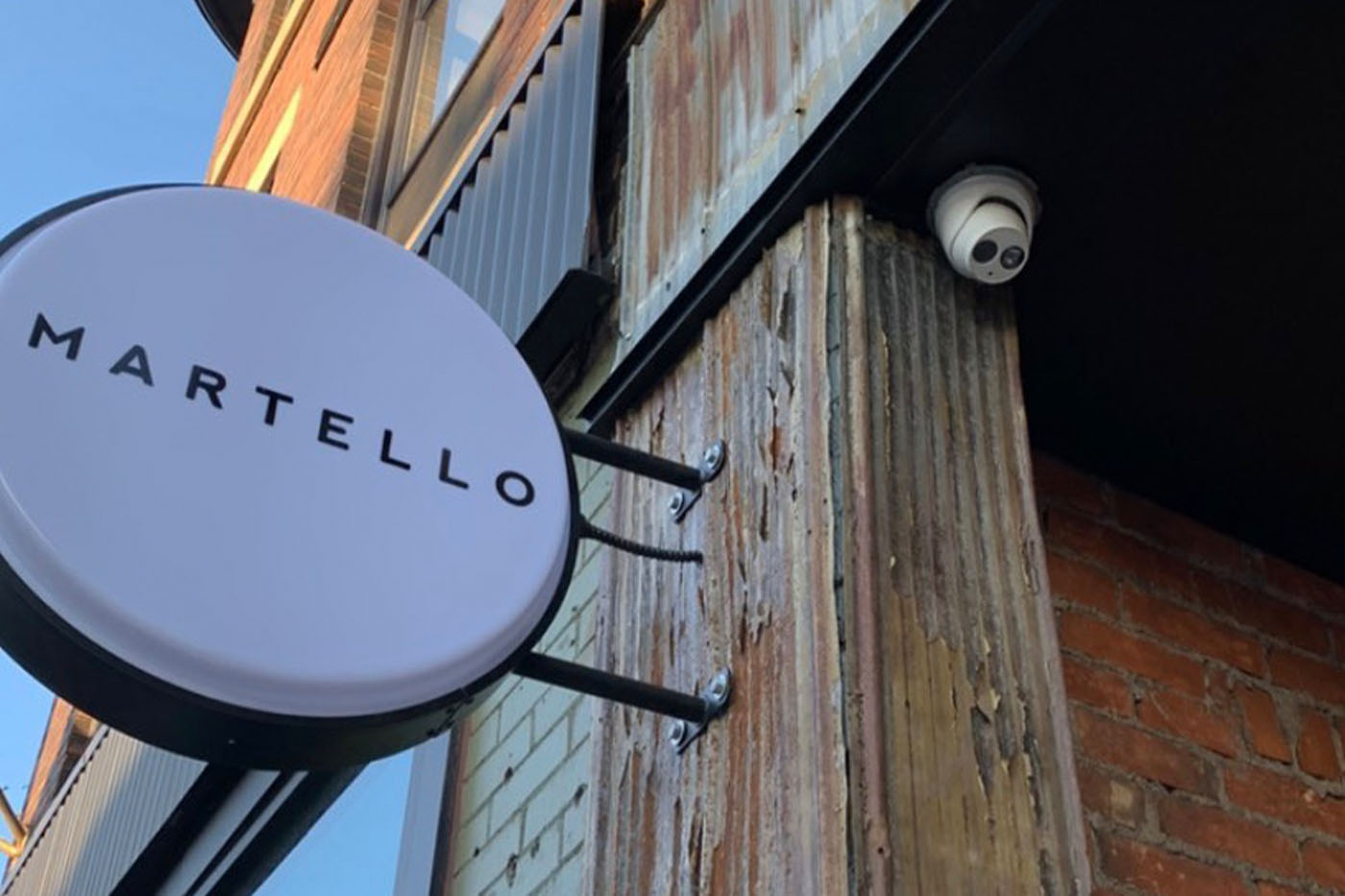 A gorgeous, modern eatery with old-world charm along the James North strip headed by Gabrielle Gwyn-Neumann, Martello is a more recent entry into Hamilton’s food scene that nonetheless stacks up among the city’s best for elevated Italian cuisine.

Hearty pastas like Carbonara adorn the thoughtful menu, which often puts judicious contemporary flourishes on classic Italian dishes. But the pizzas here are not to be missed: made in a Neapolitan style with a thin and flavourful crust and a range of toppings like tomato sauce, prosciutto, wildflower honey, and truffle oil. A perfect indulgent option for when you’re craving something a step above your standard takeaway pie. 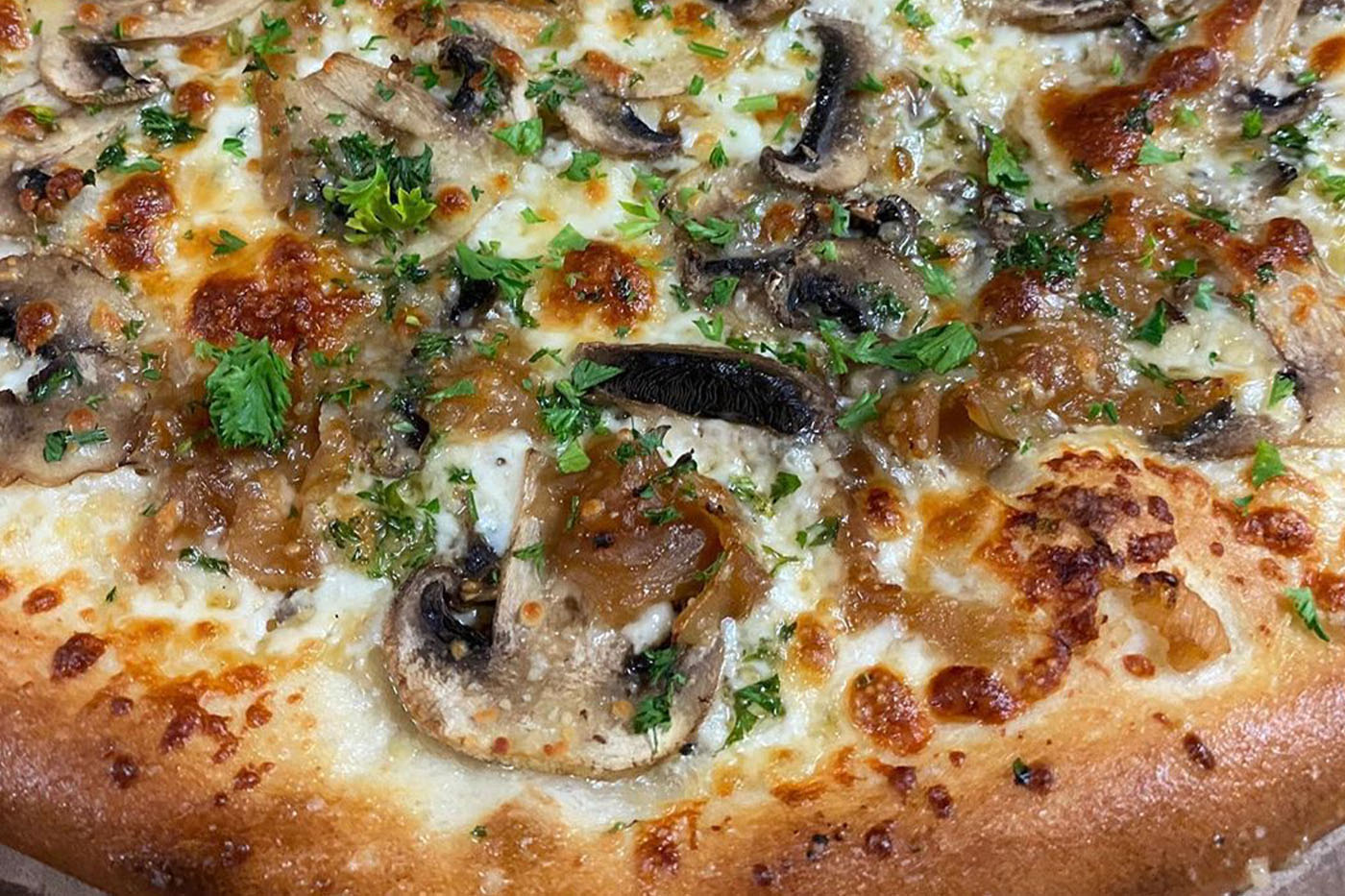 A hidden gem in the most literal sense, The Red Door Cucina in Dundas is worth the small scavenger hunt to find it

Tucked away in a small kitchen behind the main Downtown Dundas strip, The Red Door is slinging some of the Hamilton area’s best pizzas, made in a beautiful thin crust style in options that run the gamut from tomato sauce-based offerings to white pizzas and much more.

Pastas in homemade sauces, salads, and fresh paninis round out a menu large and enticing enough to warrant multiple return visits; and trust me, you’ll want to go back to The Red Door again and again (that is, if you can find it). 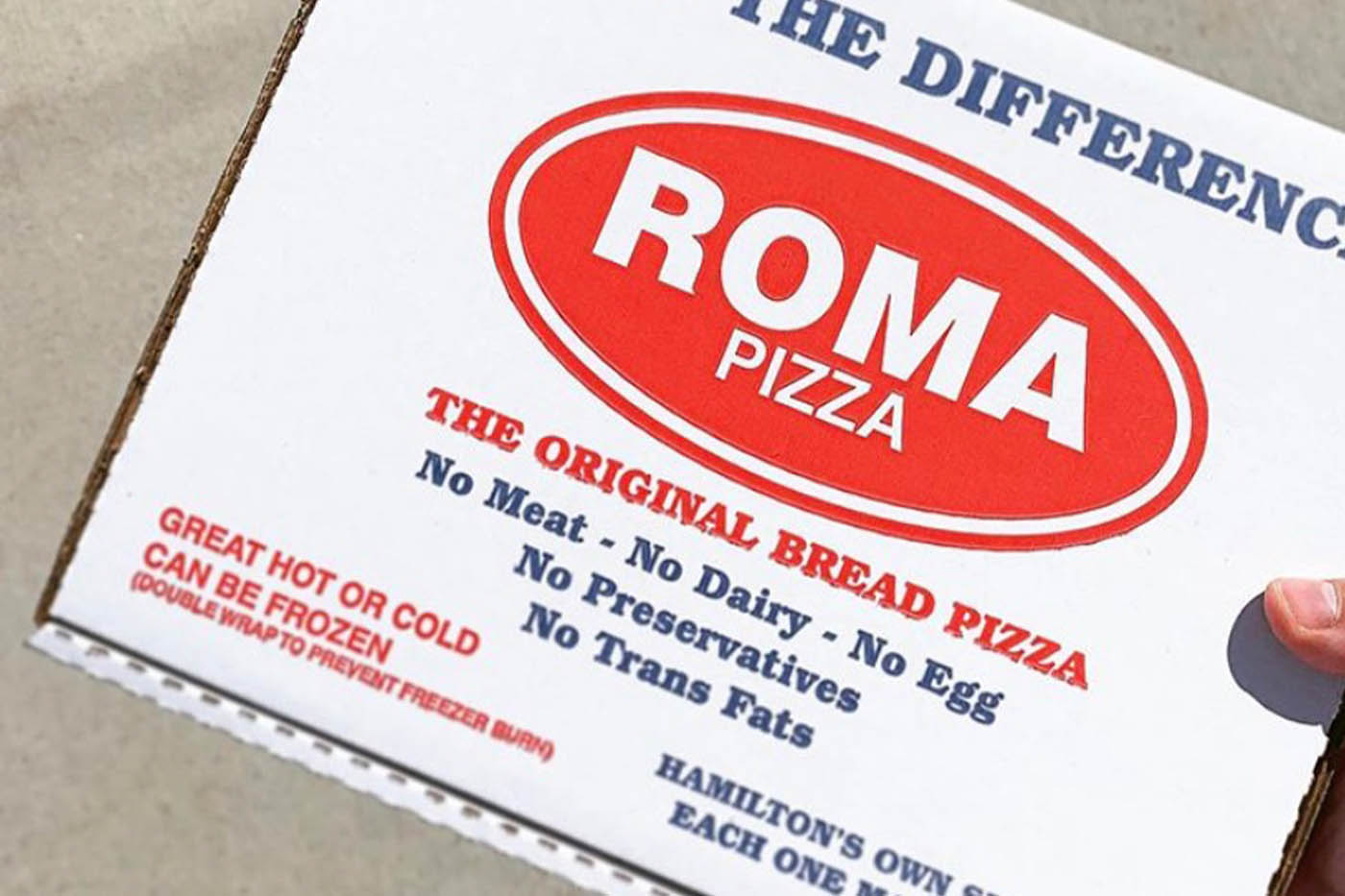 Pizza purists may have a beef with this entry on the list, but I dare any of you to name a local food institution more iconic than Roma Bakery & Deli and their unconventional bread pizzas.

With local roots dating back a whole 70 years, the family-owned Roma Bakery & Deli is an East Hamilton mainstay for their selection of deli meats, cheeses, fresh baked goods, and homemade Italian-style desserts. But they’re inarguably best known for the Roma slab pizzas that sport a uniquely light and airy crust with a bright-yet-savoury tomato sauce slathered all over and – believe it or not – no cheese whatsoever.

Affordably priced, singularly delicious, extremely versatile, and beyond satisfying, there’s hardly a Hamiltonian who can say they haven’t ever tried Roma Pizza; after all, it’s been a staple of local birthday parties, picnics, and work lunches for decades. 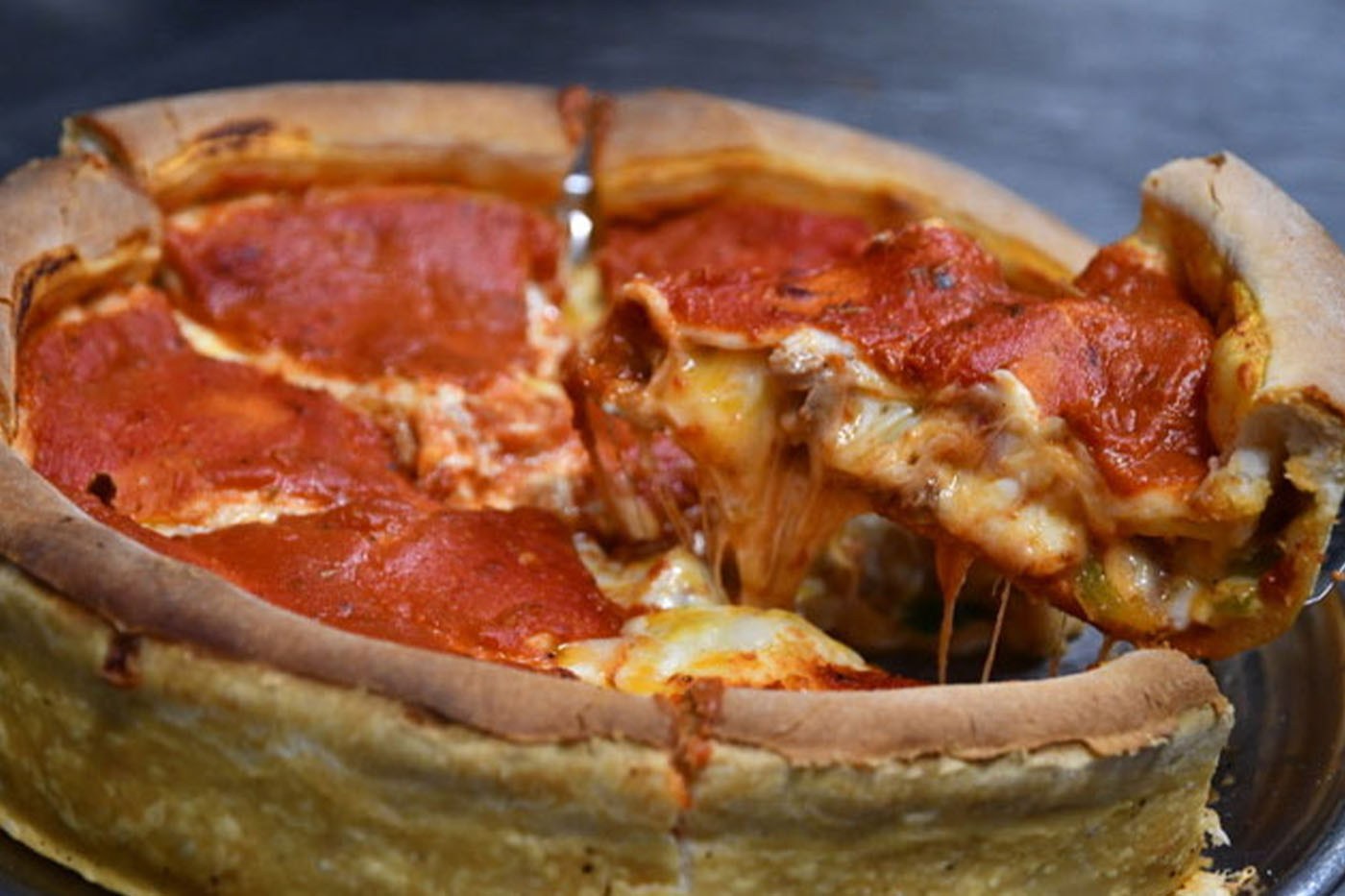 There are few restaurants in Hamilton that have as wild a fanbase as the decades-old Chicago Style Pizza does.

There’s a clear reason for that. Not only is Chicago Style Pizza one of the only places in Hamilton and the surrounding area to get your hands on authentic Chicago-style stuffed deep dish, they also happen to be very, very good at whipping up those pies.

It’s not uncommon for there to be lines out the door and sizeable wait times for dine-in or take-out at Chicago Style, but the wait is very worth it for these deeply indulgent pies. Sure, this longstanding Hamilton joint also serves up hand-tossed pies, pastas, salads, and more; but if you’re not going for the deep dish, you’re really missing out. 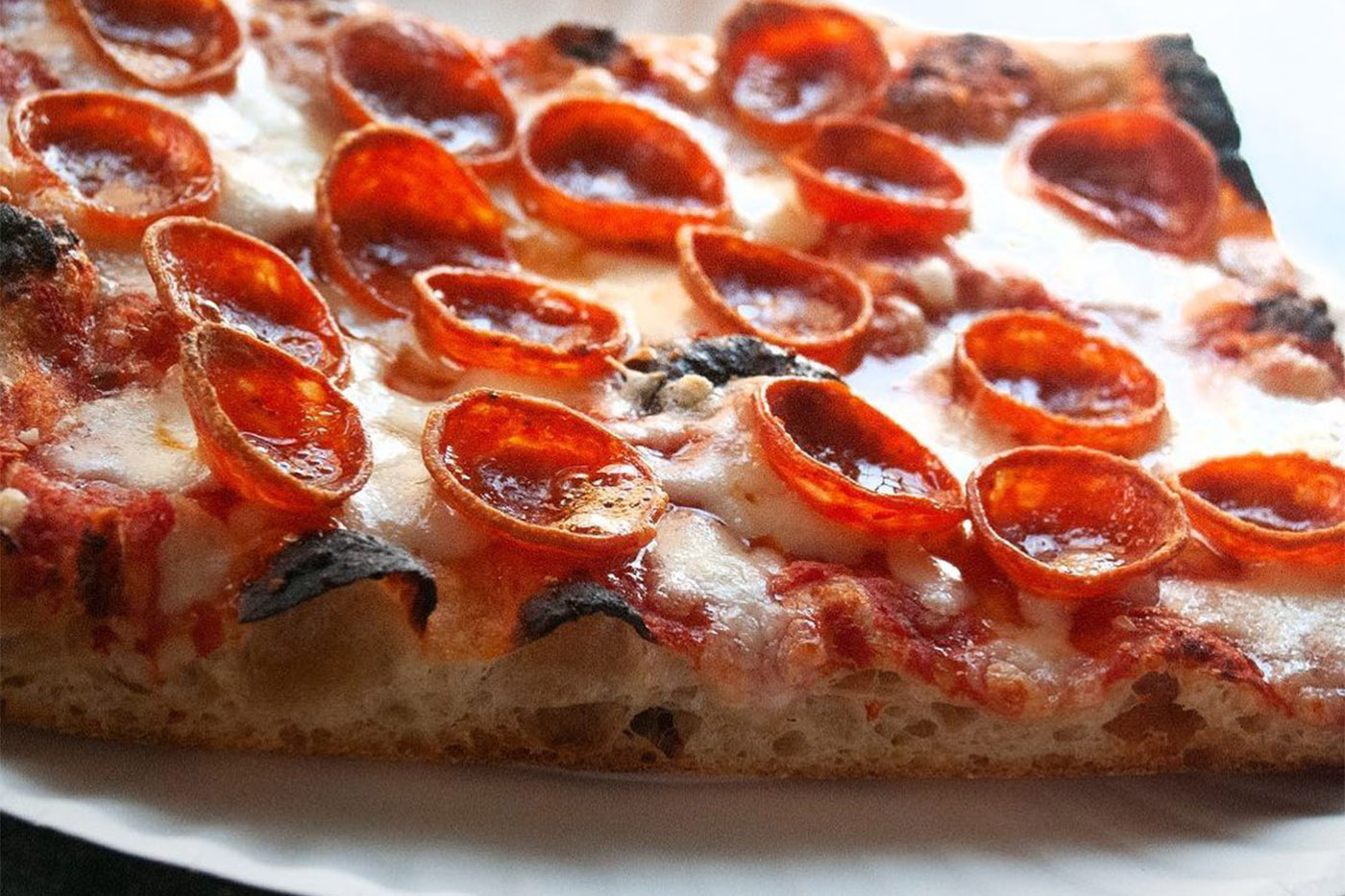 Strong words, but I’m sticking to them: Flora Pizzeria makes the best Roman-style pizza in Hamilton.

Not even a year old, Flora Pizzeria operates out of a tiny utilitarian kitchen by the corner of James South and Young Street, pounding out gorgeous sourdough slab pizzas that are loaded with only the highest quality toppings; some of which are imported straight from Italy.

A classic Margherita is more than enough to showcase the quality of Flora’s offerings, but this tiny spot also makes more involved pizza options with toppings ranging from Nduja sausage to Prosciutto, from artichoke to potato, from Parmigiano Reggiano to Gorgonzola.

Seasonal salads and desserts like cannoli complete the picture here on a menu that practically demands to be savoured. 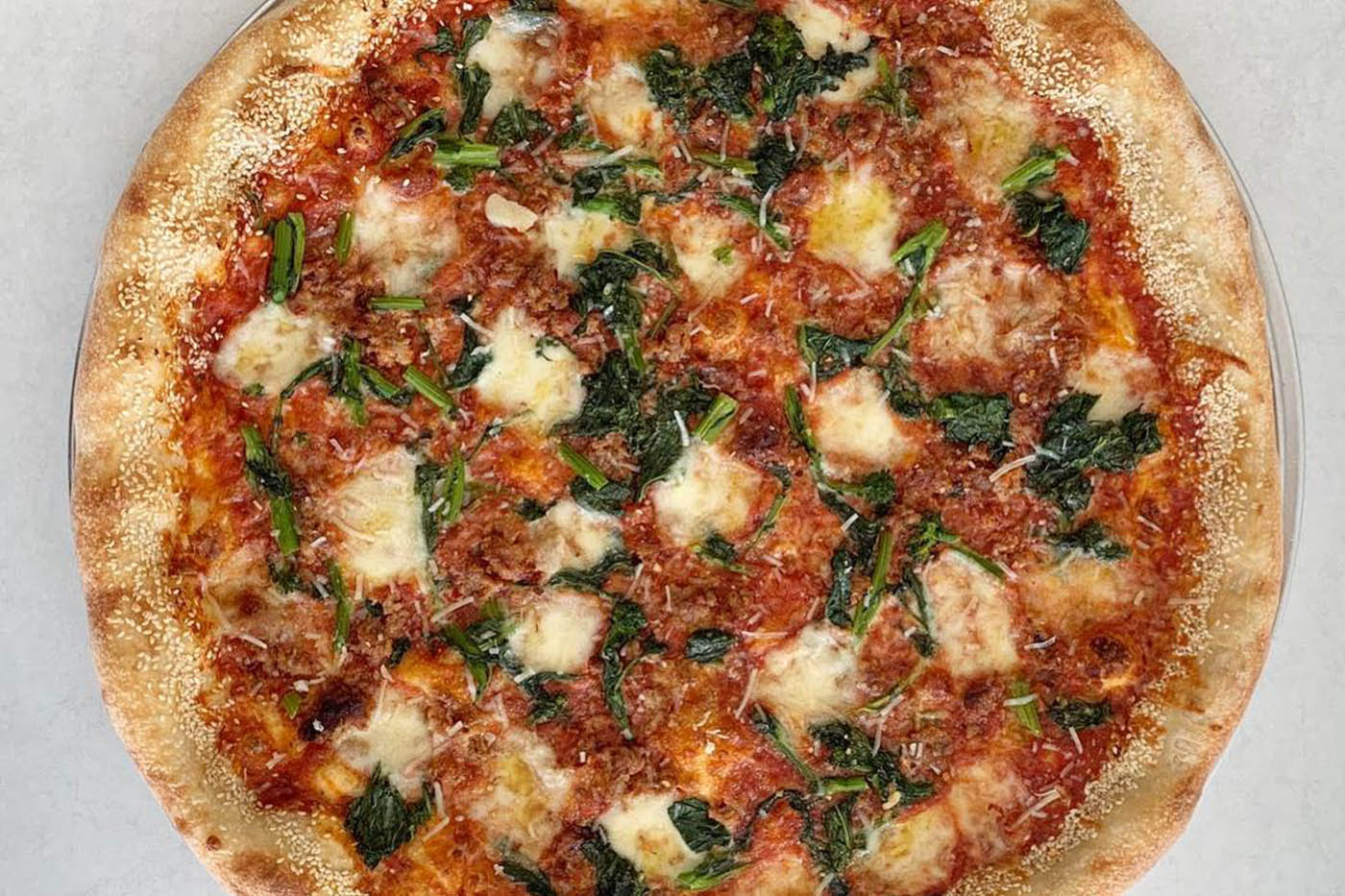 If you’re on the hunt for authentic New York-style pies, look no further: short of crossing the border and driving to New York for the real deal, there’s no better place in the Hamilton area than Shorty’s Pizza.

Shorty’s is routinely in hot demand, their casual Cannon Street storefront holding one tiny open-concept kitchen with a team cranking out pizzas like a well-oiled machine. Standard cheese and pepperoni pies are always a great choice, but Shorty’s is also known for their White Pizza loaded with garlic ricotta, arugula, lemon zest, and pesto with a nutty sesame seed crust; or the Spicy Sausage with chillies, onion, Grant Padano, chilli oil, and hot honey.

The toppings are fresh and flavourful as can be, sitting with heft atop a foldable thin crust. Add some house-made dips  and maybe a Caesar salad to the mix, and you’re in business. 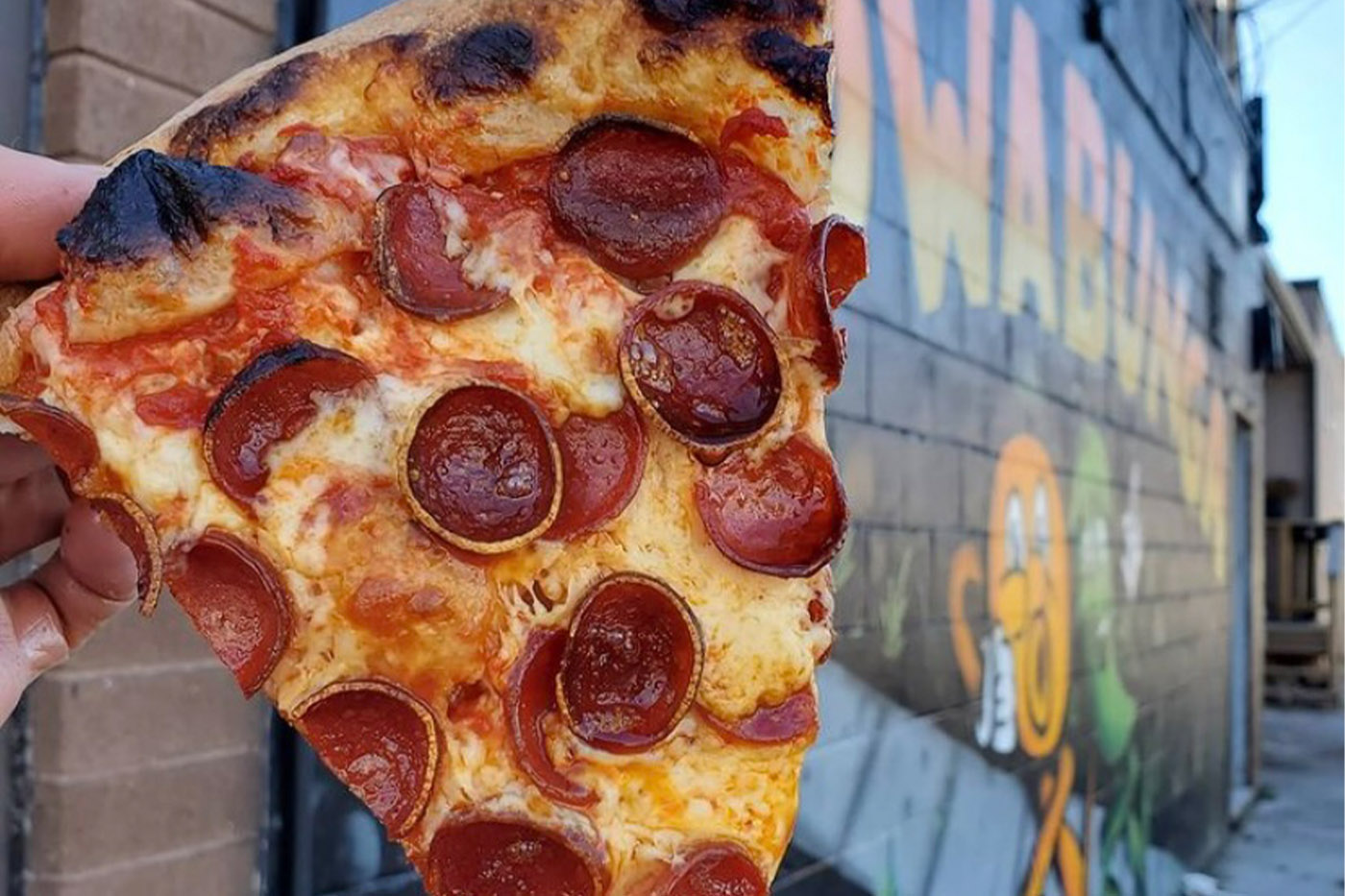 A joint effort by heavyweights of Hamilton’s food scene bringing their expertise from past stints in kitchens like Quatrefoil, CIMA Enoteca, and Shorty’s Pizza, the pizzas at Cowabunga are something special.

Located in a takeaway-only spot on the Hamilton Mountain, these folks make playful pies with sophisticated, chef-driven touches and the highest quality ingredients imaginable. The eponymous Cowabunga pizza is loaded with Korean-style popcorn chicken, peanuts, and scallions; while the 1Up gracefully reinvents and elevates the white pizza with its harmonious marriage of truffle cream, honey, white truffle oil, smoked Maldon salt, and chilli.

But there’s plenty more where that came from. Cowabunga’s mighty pizza menu is complemented by a handful of house-made dips (the garlic dip is transcendent), and this pizza place ups the attractiveness with an ever-changing range of hard-to-find candies, snacks, and pops. 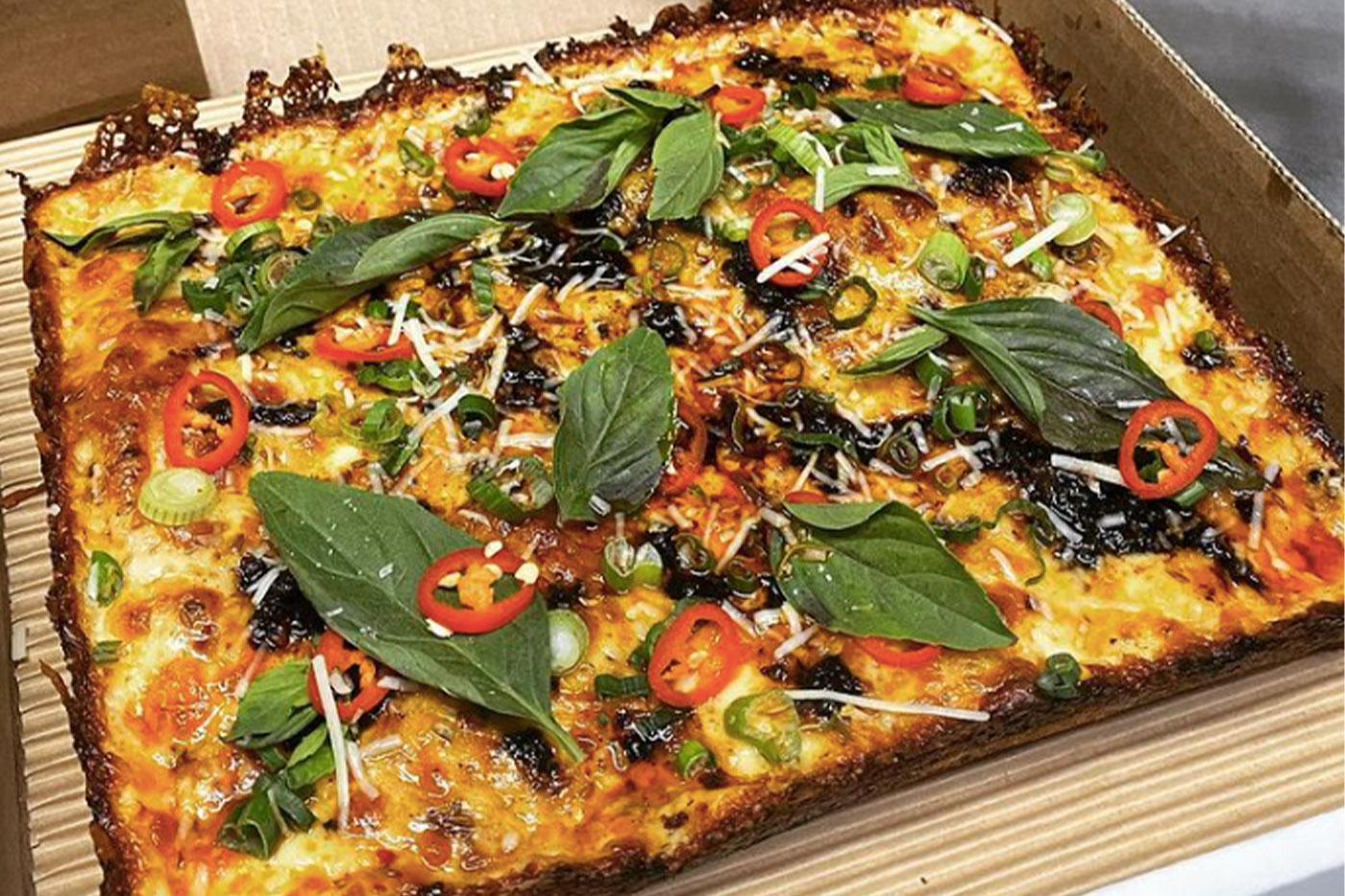 Getting top marks for quality, consistency, and inventiveness, the award-winning MaiPai Tiki Bar isn’t just a pizza place; it’s a destination, attracting folks from Hamilton and beyond to try their rangy, unique takes on the Detroit-style pizza in an immersive tiki setting with cocktails and more.

Characterized by their rectangular shape and crispy, cheesy edges, Detroit-style pan pizzas are relatively hard to come by in the Hamilton area; but when MaiPai entered the scene just two years ago under the stewardship of Pokeh’s Salar Madadi, they both filled a gap and set the bar sky high.

The Detroit Red Stripe is the most straightforward showcase of what MaiPai can do, with its blend of mozzarella and brick cheese loaded with a thick stripe of zesty house-made red sauce. But MaiPai arguably shines most with its rotating menu of feature pies, many of which push the boundaries of what pizza toppings can look like, from blueberries to mint to tamarind chutney.

Pro tip: wait until summer when corn is in season, because MaiPai’s corn-forward feature pizzas are pretty much unforgettable.

Looking to explore more LOCAL pizza places? Then be sure to explore our search page!