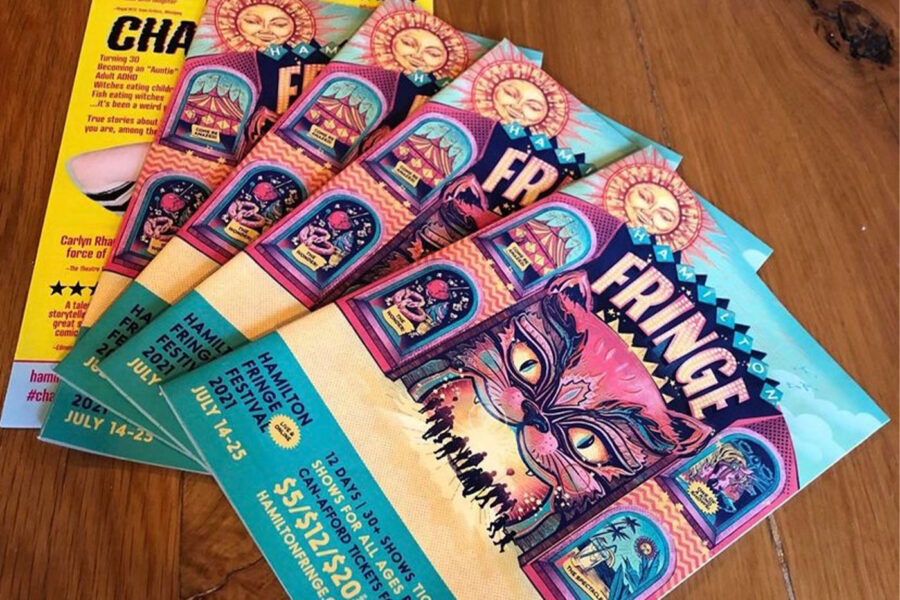 It’s that time of year again; one of Hamilton’s premier annual events is about to take over the city for 12 dynamic days of independent art and performance.

The Hamilton Fringe Festival, currently entering its 18th year as a local arts institution, is bringing a special hybrid version of the festival to the city for 2021, incorporating digital events with a select number of special in-person presentations.

So what can locals expect at the 2021 Hamilton Fringe? As per usual, there’s going to be a whole mixed bag on offer: straight plays, stand-up comedy, audio installations, music, dance, digital theatre experiences, performance art that’s thrillingly tough to categorize, and much, much more.

Though there are dozens of diverse events to choose from between July 14th to 25th this year and pretty much something for everyone, we’ve curated a small list of some particularly intriguing offerings that are worth a look at this year’s Hamilton Fringe!

As the title suggests, this timely new play by Hamilton’s own Steve Hartwell dives into a topic that should resonate with many; especially after a challenging year of pandemic isolation.

Featuring local talent including Jesse Horvath, Rebekka Gondosch, and Jen Frankel, Hartwell’s play looks at loneliness through the lens of an affecting and darkly funny family drama. Hartwell has become an award-winning Fringe mainstay, so this show – which will be available for livestreaming on demand – is well worth a look.

This hilariously-titled piece is billed as a “cringe comedy” and, given the subject matter, that label seems very apropos.

A verbatim theatre piece created by Hamilton & Toronto’s Afterlife Theatre, It’s a Beautiful Day… promises to dive in on the “absurd, awkward, and downright ridiculous” ways that non-Black people attempted to engage with social activism in the wake of George Floyd’s murder in 2020.

Featuring performances by Carly Anna Billings, Liz Whitbread, Patrick Teed, and Roselyne Dougé-Charles, expect an entertaining piece that explores why failure is an uncomfortable-yet-necessary part of social change and being a true ally.

This collective creation by the teen theatre students at the Hamilton Conservatory for the Arts promises an engaging, innovative digital experience.

Guided by Stephanie Hope Lawlor and Erica May-Wood, this young collective has created a piece inspired by the diverse array of stories that are most meaningful to each of them. Expect a one-of-a-kind theatre piece that’s charming, funny, and beautifully honest.

Stories about fitting in, standing out, #ADHD, summer camp and… evil kindergarteners?! 🌞

Coming to a screen near you! 🖥 @HamOntFringe#HamArts

Her new show, Chaotic Good, will surely feature more about what local audiences have come to love about Rhamey’s work: hilarious, weird, and heartfelt true stories about everything from adult ADHD to the perils of turning 30 to trees that talk to each other. Don’t miss this.

Mr. Wonderful and I (Page1 Theatre)

One of a handful of non-Ontario offerings at this year’s Fringe, this new play presented by Halifax’s Page1 Theatre and written by Isaac Mulè is a digital one-person show starring ACTRA Award winner Aliister MacDonald.

Taking a dramatic look at the discovery of one’s own mental health and what it means to “thrive beyond a diagnosis,” this piece is sure to resonate with audiences.

Stephen Near is one of Hamilton’s most prolific playwrights, known for works that look at intimate human truths through the lens of larger issues like Canadian politics, conspiracy theory, espionage, and domestic terrorism.

Near’s latest work, presented in an audio format, looks even further inward at the playwright’s personal obsession with Sasquatch: one of Canadian folklore’s most enduring and mysterious legends.

This offering by Hamilton’s Porch Light Theatre is poised to be one of the Fringe’s most unique and innovative digital theatre experiences.

This immersive, site-specific adventure features new works written by some of Hamilton’s most exciting young talent including Sonny Duan, Metia Irakunda, Chyler Sewell, and Bruce Wu; all of whom are between the ages of 17 and 19.

Their stories takes the form of four distinct radio plays, each one best experienced while exploring one of four secret locations throughout Hamilton; an exciting, remote theatrical experiment that warrants repeat visits.

Hamilton Fringe veteran John Bandler – also Professor Emeritus at McMaster University – is back with a new short film he’s written, produced, and directed that’s sure to be a cerebral experience with an intriguing science fiction bend.

Featuring performers Steph Christiaens, Jaclyn Scobie, and Emily Wood, this short film follows two extraterrestrials as they attempt to figure out whether coffee shops provide a clue to the extinction of humans. The unique premise alone makes this worth a look!

But there’s plenty more where that came from at the 2021 Hamilton Fringe Festival as it runs from July 14th to 25th, so check out their website now for ticket information and full event listings!