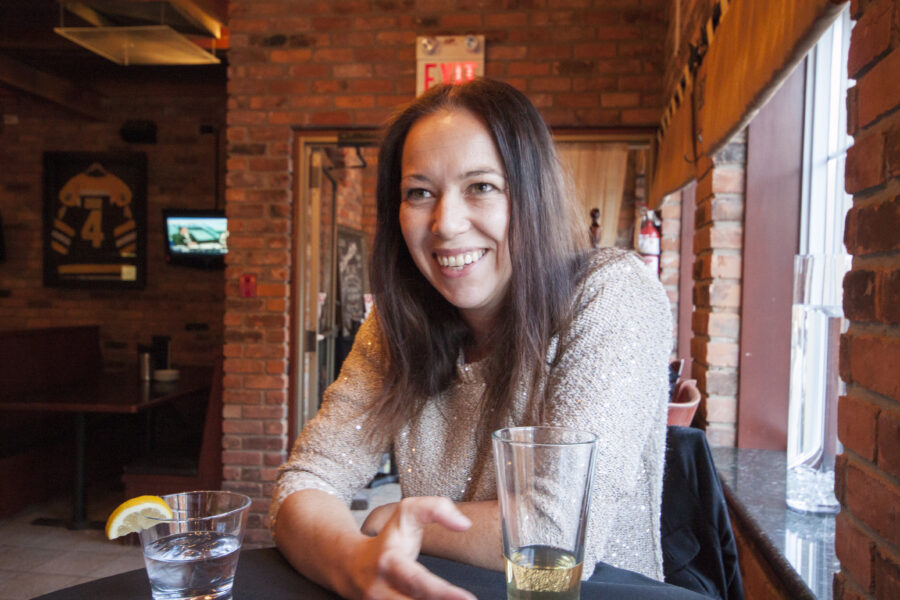 In Conversation with Abigail Richardson-Schulte

Tell me about your background and how you came to be composer-in-residence at the Hamilton Philharmonic Orchestra.
Sure, well I studied composition. I did my undergraduate degree at the University of Calgary and my Masters and Doctorate at the University of Toronto, and then moved out to Dundas and have lived there since 2004, and then in 2012 became composer-in-residence with the HPO. So it’s really nice to finally work in my own community.

What brought you to Dundas?
I met my husband. He’s a violinist and he was playing in an opera of mine in Toronto. I should mention an interesting part of my history, and that’s that I was deaf when I was younger.

No kidding!
Yeah, I could hear when I was very young, but I had so many ear infections that soon enough I couldn’t hear at all. This was in England and they picked it up at school. In England they start school really early so I was at school at age four, and they noticed that when I wasn’t looking at them, I wouldn’t answer. So they told my parents they thought I was deaf. They asked me, and I said, “No, I can hear!” I could understand, because I had gradually begun lip reading. Then when I was six, my dad was asked to move to Calgary as an engineer and take over a branch of his company there. But then they hit a snag, because Alberta Health Care said that I would be a drain on the system because of my hearing. They would only let me in if three separate specialists declared me clinically deaf, with no hope of recovery. So that’s what happened. I remember going up to London on the train with my mom, and sit- ting in these little, tiny, dark studios. They’d rig me up and say, “Press the buttons when you hear things.” I remember looking out at the doctor past the glass and him shaking his head “no.”
And then the last guy happened to be a family friend and he was an ENT specialist at Queen. He did his research and when we left he told my parents, “You never know; Calgary has a very dry climate. Good luck.” Within six months, all of the scar tissue dried up.

And your hearing was restored completely?
Yeah, it was across a couple of months, but it was absolutely great hearing again, but because of that my parents never thought to put me into music. However, when I was in grade 6 I picked up the flute because everyone had to pick up an instrument at my school. And then in university, I went into science for about two weeks. [laughs] Figured it out, and dropped a lot of courses and practiced really hard on piano and then got into the music program after playing for only five years. My first class was Theory, taught by a composer, Allan Bell, and he said, “At the end of the semester, you’re going to be expected to write a piece.”

So that’s how I ended up getting into composition. And I studied with an unusual guy, just outside of Calgary. His name is John Ryan. He played Country and Western piano for the Stampede. He trained the British Army in survival skills. He had little huts and kept goats and deliberately didn’t have electricity. I’d have my lessons by candlelight. But he also started me telling stories with music. He’d say, “Find a story and write the music.” I loved skiing, so he’d say, “Write the music for a ski hill for Lake Louise. Write a commercial for that.” So he was always thinking about music and the emotional content and how to tell a story.

Let’s talk about your professional career. You’ve had some real successes in recent years…
From 2006 until 2009, I was affiliate composer with the Toronto Symphony, which was a great position and I kept close ties with them. They’ve commissioned quite few works from me, especially children’s works. And this is how it ties in to the trumpet concerto: In 2012, they com- missioned “The Hockey Sweater.” You know The Hockey Sweater by Roch Carrier? It’s about the little boy who gets a Toronto Maple Leaf jersey in the mail instead of a Montreal Canadiens jersey. Every Canadian kid has to read that.

Yes! The kids would write to Mr. Eaton to order their jerseys!
Exactly. So TSO commissioned that with the National Arts Centre Orchestra and Calgary Philharmonic Orchestra. It was so amazing. It got so much press. We had a press day and would go from room to room and have fifteen minutes in each. We were on Canada AM. It was wild. I was so excited about this and I knew the TSO really well because I had a position with them. Because of this, I knew their first trumpet player was extremely good and I so thought, “This the time to write a really great sports fanfare with a really difficult, kick-ass trumpet part. I’m gonna do it!” And I showed up to the first rehearsal, and it wasn’t that trumpet player. There was another guy I’d never seen before. And my heart sank. I thought, “What have I done? Is he going to be able to do it?” Anyway, within a few minutes, I was just blown away. He was just nailing everything. I didn’t know him, I talked to him there, and then a few months later, I started as composer-in-residence at HPO, and that trumpet player ended up being Michael Fedyshyn, our principal trumpet player at HPO. So we saw each other in the fall and we looked at each other like, “You! You’re here!”

Right away, we figured out that we wanted to do something together. So he said, “Why don’t we pitch it to Carol Kehoe who just started here as executive director?” That was her first year. He also had ties to an orchestra in Toronto called Group of 27, run by Eric Paetkau, music director. And so we agreed that this would be a good thing to do as a co-commission. They each paid half, and it’s premiering here, with Eric Paetkau conducting, and then next season it will be done in Toronto with Group of 27.

How significant are your program notes? Will you get out on stage and explain this piece to the audience?
I will get out there and explain it. I think it’s wonderful when composers can actually show themselves in front of an audience and prove that we’re alive! We’re not all old dead white men. I think it makes a big difference, but of course I’ll have written program notes as well.

How long is it?
It’s 20 minutes and three movements. I like to divide it up also because he has to switch instruments, there are logistics here. He has to put trumpets on stands, pull them off… So I have to think about that and how much time it take to switch.

Tell me a bit about your approach to writing a new piece.
For one thing I’m absolutely tied to my piano. I sit at my piano and write, so when writing an orchestral piece like this, I probably have three staves. One staff for the trumpet, two staves for the piano, which is the orchestral part. And then sometimes I’ll fill it out and add another one if I need it. For me, it’s almost like creating a black and white sketch that way. And then I have lots of little notes, like “this should be flute,” “that should be strings,” this kind of thing. So every note is in there, every meter. The dynamics aren’t, at that point. So yes, it’s not much editing but all the notes are there, and the timing, and things like that. Then it’s like painting—orchestrating—deciding what colors to use. Where it should go, shifting
around the weight. Should it be light? What needs to come through? That’s just looking at it almost from different angles and then of course adding all of the finishing touches: the editing, the articulation, the dynamics, things like that later. So it’s really in two stages for me.

What are three goals you have for yourself and the HPO for the next couple years?
I would love to help bring opera to Hamilton. I love opera and actually opera is really where I learned to take myself less seriously. Because as an opera composer, you have to do whatever is required, so if you have to write comedy, you can’t take yourself too seriously. You just have to be able to switch styles. It’s such a brilliant art form and people really love it here. Our last opera—well, Popera; it was with Daniel Lipton in January—had such great response from the community and it was just so much fun. It’s an entirely different crowd here for opera. They’re just waiting to come in. So yes, I would love to see that.

Bring back the opera, that’s number one. What are two more goals?
For the orchestra to perform more Canadian music—and they are. I’m really excited about our new music director, Gemma New. She’s a great supporter of contemporary music and she’s already programming quite a lot, and I just really look forward to working with her on that. Our family concerts are also really exciting. I do a lot of family concerts: “Alligator Pie” and “The Hockey Sweater” and I did so much family with other orchestras, but not with the HPO, with my home orchestra. They did “The Hockey Sweater.”

So more Canadian music, and more family events in the community.
Yes, and these are things that we are already doing more of. It seems like a bit of a cop-out but all of my goals are already in the works!

That’s good! It means you’re all working in the same direction. Everyone at the HPO seems to share a genuine excitement and passion for music – music that is living and vibrant despite the fact that the composer may have been dead for 300 years.
Yes, and despite the composer no longer living, there’s still a great story in their work. The great composers did so much for our art form and moved it forward.

And what’s interesting to me, is how the HPO is challenging the stereotypes of orchestral music as com- ing from, and being for older generations. Mozart never saw 40. He was always young. People often think, “Well, my grandparents listen to Mozart.” But Mozart was never a grandparent. He was a kid, he was a young professional. He would have been an hpoGO member!

That’s a good quote right there. It’s true though, the HPO is doing exciting things! I mean, last year we did an electronic call for works, and put on a big sound installation at Doors Open Hamilton in collaboration with the Canadian Music Centre, and doubled up and did it for Doors Open Toronto, and all these composers from across the country said, “Wow, you embrace us! You’re an orchestra! Why? This is great!”

That’s a good reputation to have.
Absolutely. We’re changing.