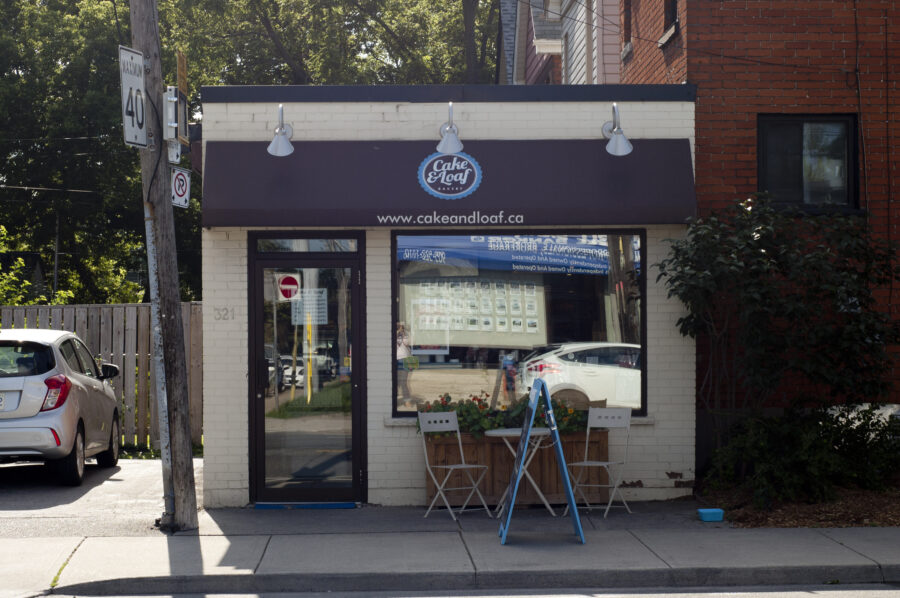 Let Them Eat Cake and Earn a Living Wage

Cake and Loaf building a solid reputation as an employer as well as a purveyor of Hamilton’s best treats.

It doesn’t matter if you believe in the benefit of a living wage or if you think that it’s the death knell for small businesses. Hamilton’s Cake and Loaf Bakery proves that you can have your cake and provide a decent living wage for all of your employees, too.

Fans of the business know it well. From decadent unicorn bars, super-tall grab-and-go cakes perfect for any party, to savoury breads, pretzels, and quiches that make your mouth water – the Kirkendell neighbourhood bakery rolls out some of the best treats in the city. Now at twenty-six employees and with a second location in the Hamilton Farmer’s Market, owners Josie Rudderham and Nickey Miller, who met while attending Niagara College in 2003, have built a business that supports local suppliers and their community while maintaining what they call a “moral imperative” to provide their employees with a living wage.

Historically, bakeries and cafes have been known as low-wage employees. Cake and Loaf challenges that assumption. You may wonder, what exactly is a living wage, anyway? Isn’t minimum wage enough? Not if you take into consideration that living a sustainable life requires more than just a pay cheque. The Ontario living wage is based on several factors: the actual expenses of a family of two working parents raising two children in a specific geographic area. These basic expenses include food, shelter, clothing, and transportation. According to ontariolivingwage.ca there are eighteen different regions, all with different living wages. They’re updated periodically to account for inflation and economic changes. Hamilton’s current living wage is set at $15.85 per hour and it’s been that way since November 2016. In comparison, Toronto’s living wage is $18.52 per hour and hasn’t changed since April 2015. Not surprisingly, it’s the highest in the province.

Minimum wage currently sits at $11.40 per hour. In October it will go up to $11.60 then $14 in January and ultimately $15 per hour by January 2019. Many small businesses are protesting the wage hike as too high and that profit margins will vanish.

Yet by setting their own standard, based on what they believe is a fair and equitable practice, Cake and Loaf has defied that logic and built a solid reputation as an employer as well as a purveyor of Hamilton’s best treats.

“Because we set such a high standard, we’re not the type of place where you show up, do the job and walk away at the end of the day. We’re the type of place where we expect you to care about what you’re doing,” Josie explains. Allowing their employees to shape the products of Cake and Loaf also made it easier for them to justify paying them a living wage. “I think what happened was we started hiring people and we realized how amazingly talented they are. We wanted to allow them to express that.”

That’s lead to a confections department, a bread and savoury department, lunch menus, custom-made cakes, and more. And their success has largely been thanks to social media.

Any given day you’ll find several Instagram photos popping up from either the Dundurn bakery or the Market. Most are posted by co-owner Nicky. “We refuse to pay for advertising. We thought if we [create] a story about things we genuinely care about, then people will [share it].” The proof was in the Farmer’s Market expansion – they would hear from customers within hours of posting something that they’d seen it on social media and were coming down to sample it themselves.

And the recognition doesn’t stop there. Josie and Nickey were named Citizens of the Year in 2016 by the Hamilton Chamber of Commerce, and that same year they also won first place in The Globe and Mail’s Small Business Challenge Contest, beating out 3,400 other small businesses in the entire country for the $100,000 prize money. They are careful about what they want to do with the money, though. “Our biggest challenge right now as a five-year-old business is transitioning [from] ‘Hey, do you want to start a business?’ to ‘Oh, shit! We’re a real company!’” Josie explains. “We want to make sure we’re doing all the things correctly.” That includes making sure everyone is earning a decent living wage. “Nicky and I don’t get a raise until everyone else does.”

Other ideas on the horizon include investing in better equipment and ensuring that Cake and Loaf doesn’t become the type of employer they fled themselves. “It’s not about working sixty hours a week. We don’t impose that on our employees and we don’t impose that on ourselves. Cake and Loaf is just one part of our lives.” Josie notes that often she’s heard employees say they need to take a day off work to watch the kids because their husbands have higher paying jobs. “I hope that’s something that we’re helping [end] by creating well-paying jobs.”