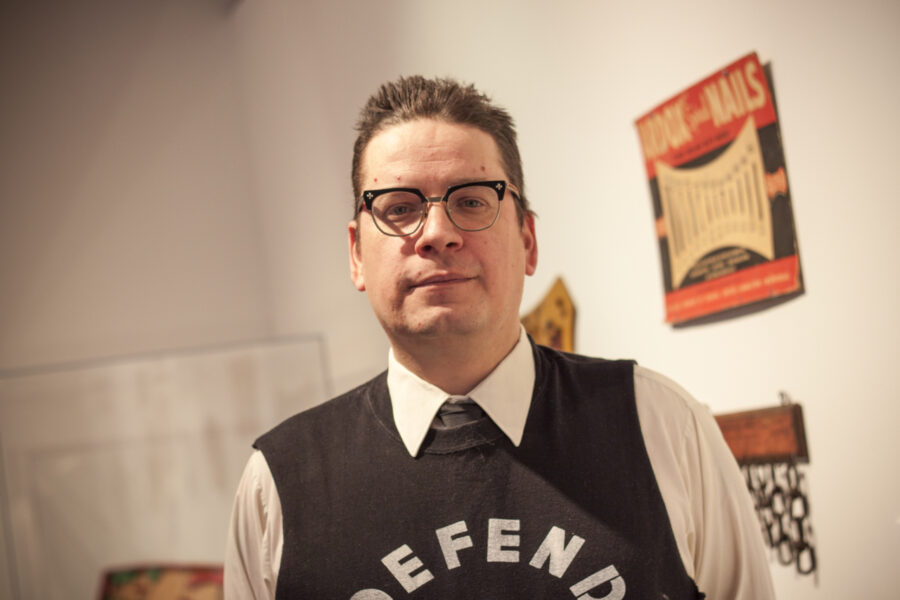 Made to Think by Things Made Here

Sitting in the Art Gallery of Hamilton’s Design Annex on James North, Glen Faulman wistfully talks about the glory days of Hamilton’s bygone manufacturing era. Faulman works at US Steel and is part owner of the popular music venue This Ain’t Hollywood. He pulls out a collectable coin from the middle of the last century and places it on the table. Imprinted on the coin is the text “A City of Opportunity for Workingmen and Manufacturers”. The middle of the coin’s imprint boasts of Hamilton’s 700+ industries. A bygone era indeed.

We’re in the Design Annex because it currently displays an exhibition of just some of Faulman’s personal collection of Hamilton-made goods. His full catalogue even includes a pair of Studebakers; cars built on Victoria Avenue. He’s been collecting for years, and is adamant that the items he acquires are truly manufactured in Hamilton, Ontario. This Design Annex show is an impressive exhibit showcasing signs, a cash register, and a sewing machine, and various other artifacts. Curated by Melissa Bennett (AGH Curator of Contemporary Art) and Tara Bursey, the show is called “Things Made Here: The Glen Faulman Collection” and runs until March 21st. Go, take the time, and experience this exhibit. It’s a perfect way to celebrate our manufacturing heritage in the context of a new, arts-based venue – a truly ironic but fitting setting.

I had the opportunity to discuss the exhibit with Glen and Melissa recently. Here’s our conversation.

MG: Tell us a bit about your collection, how extensive is it?
GF: Ballpark estimate: maybe 200 things. Most of it is little things because they’re cheaper and I have limited space in my house. Not that my wife minds too much, but if I buy something little, it’s less likely to get noticed.

MG: Is it all old stuff? What sorts of things do you try to look for?
GF: Anything that’s made in Hamilton; anything that came out of a local factory. So, it tends to be older, because our industrial side is old, we don’t have much that’s modern. Pretty much, say from the 50’s back.

MG: What’s your favourite piece, that if your house burned down, you would run in and save?
GF: I brought it, and it’s my favourite because I made it. Before Stelco, I worked at Proctor and Gamble, and that’s pumice-powered Lava hand soap. It was supposed to be for mechanics.

MG: Where do you find this stuff?
GF: eBay, a little bit of Kijiji. I don’t do a lot of Kijiji. Because I’m a shift worker, I check the computer at seven in the morning. The odd time I can get out to flea markets and antique shops.

MG: Do a lot of people collect this stuff?
GF: I don’t think so. There are a few people who will collect local stuff. There are people who are say, train nuts, or a bottle nut or something like that. I have had some trouble because I’m not like that. I have to try and cross all these different disciplines. Other people are into just one thing, whereas I’m into all of them, so I have to cut across them all. I have to do a lot of research. Just because it says Hamilton on it, doesn’t mean it’s from here. It could be from Hamilton, Ohio or it could just be a Hamilton watch or just someone’s name.

MG: What’s the Art Gallery of Hamilton’s interest in this particular collection?
MB: We are always looking at historical production, but obviously the main space of the gallery is focused on fine arts. There is an opportunity for the Design Annex to look at experimental exhibitions. Originally, I was looking at the design aspect of the signs but, there is also industrial design, and furniture design that are highlighted in the shop so, it has a relationship to what is prioritized in the shop. But, also, we do exhibitions of collectors to show what someone is really passionate about. So, we do that with fine art collection, and this type of artifact collection is perfectly relevant here too.

MG: Between the two of you, how did you decide what was going to go on display in this show?
GF: She picked, I watched.
MB: It was really hard. I visited Glen’s house, and it’s totally full. We didn’t get to see everything. There’s a trunk on the floor and we got to see the first three layers of paper and envelopes and letters and ads. But, then there’s the whole next level. It would’ve taken days and days to unpack everything. There was a china cabinet full of bottles that are four rows deep and several shelves that have little medicine things and all sorts of different things. So, you can only really have an overview unless you want to stay for four days.
GF: And when I was showing you around, that took four hours. To try and conserve space in my place, if I have a big tin, a medium tin and a small tin and they don’t necessarily have tops on them, then one goes inside the other, and you maximize space that way. If my wife says I have too many wooden crates lying around, then I go out and buy a big wooden crate and they all go inside!
MB: But, all of these things were in a prominent space, so I took pictures of everything, and then went back and sorted through and tried to find relationships so we could group them and make connections to tell the story. There were different ways the show could have gone. There were really neat maps and a diagram about how electricity goes from the 40’s. So, it’s stuff that illustrates the history but, it’s not like the paper was made in Hamilton. So, we decided it was going to be stuff that was made in Hamilton and not stuff showing or advertising stuff in Hamilton, so we had to narrow it down.

MG: Did you ever intend for this to be publicly displayed, or has collecting it been more for your own interest?
GF: Well, I guess kind of both. I have always been a history nut and I’ve always been interested in the industrial side of the city and Burlington Street. But also, a big problem is that Hamiltonians don’t toot our own horn enough. Not that there aren’t things to see here but, you could make more things to see here. So, I mentioned in the Spec article, I recently found out Dundas has a city museum. The article wasn’t just stating that fact, that they had won an award that they were making lots of money. For a museum to be making lots of money and for it to be a Dundas History Museum…we’re way better than Dundas! What’s our problem? I realize there are funding issues and the City doesn’t have that much money, but it wouldn’t be that hard to do. We have big empty buildings!

MG: As someone who works at Stelco, and is interested in east end industrial heritage, how do you think of Hamilton today? People talk right now about a shifting economy and the collapse of manufacturing in a lot of the heartland of North America, in the rust belt. Where do you see Hamilton as a transitioning economy? It’s ironic that we are sitting in an old warehouse, with things that celebrate that industrial heritage, now as a part of the Art Gallery on James Street North, in a gentrifying district.

GF: I don’t like it. I’m pro-gentrification for sure, otherwise buildings are going to fall down. But, I don’t like industry leaving this city, or North America. A foreman from work, he got taken down to Pittsburgh for US Steel indoctrination. He had a chaperone. They took him to wherever they were meeting and took him to the hotel. Well, there is no steel in Pittsburgh anymore. He took him to his hotel and they were standing outside and the chaperone said, “This is where one of our blast furnaces used to be right here on the waterfront. Isn’t it great how we’ve cleaned up the land and now there is this hotel here, and everyone can enjoy the waterfront.” The Hamilton foreman asked what happened to those jobs and the money that was attached to those jobs. Old school factory jobs aren’t just $10 per hour – they are enough to support a family. We have huge property tax load because we don’t have those factories to help support that job. I know things are shifting to medicine or education but, drive up and down Barton Street and I don’t think you can pick out too many people you would feel comfortable shaving you before an operation. Not everything transfers. So, I don’t like it disappearing.