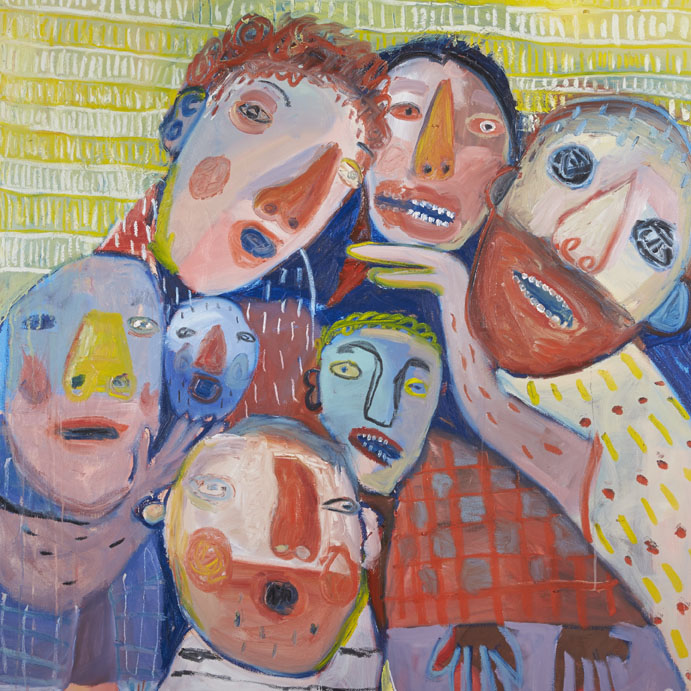 One Artist at a Time | Gord Bond

This monthly column aims to introduce you to artists around Hamilton, their personalities, and their opinions on random stuff in the city. The arts scene in Hamilton has been a rapidly-growing movement and has, largely, been under-recognized by the general population. So, here’s your chance to get to know them in a more per- sonal way. Meet Gord Bond, a visual artist and drummer in Hamilton band New Hands. He has an upcoming Exhibit at the Nathaniel Hughson Gallery.

How long have you been painting?
I’ve been painting all my life, really. My mother’s a visual artist and she does a lot of northern landscapes. We’d all go the cottage and spend the summer there, and my mom would take us out in the canoe and we’d paint an island. We were drawing constantly — lots of cartoons. I origi- nally went to McMaster University for science. I was in a physics class and I was drawing the back of someone’s hood — like all of the folds in it — and I was just not at all into the class. That’s this very specific moment in time that I can remember wanting to switch into the arts, so I switched into visual arts.

When did you develop your style?
I came up with it in my undergrad, probably around my third year. I’ve always been really interested in figure and the human form, and in particular the face, so I wanted to get really good at painting portraits. In my third year at McMaster I did these little 11×14 portraits of everyone I could get my hands on to do a portrait of, and I did over 100 that year.

How many do you still have?
I end up destroying a lot of ones that aren’t good, so they’ll be painted over with something better, hopefully. So there aren’t too many left. There are a lot of the more recent, larger ones left that I’ve been selling. I did 100 of those, and the idea was that I wanted to work really fast and do as many as possible to get better and faster. Picasso is one of my favourite all time artists — the way he plays with the figure is so interesting, because he does it in so many different ways. There’s a Picasso style throughout his whole work but at the same time it changes. I love that versatility and being able to change up the style but have your own mark on it. As I was doing those 100 por- traits, I wanted to change things up because they can get stale. So I began playing around, segmenting colours and using colours to pull the planes of the face backwards and forwards. It just came naturally as I kind of progressed.

What’s the most exciting thing happening in Hamilton right now? (You can’t say “you”.)
I think it’s what a lot of people are most excited about — it’s what’s happening downtown and on Ottawa Street. Since I’ve finished my undergrad and been living in downtown Hamilton for six or seven years, I’ve been able to watch James Street come up. I know it was happening before that, but that’s when I got to witness it. It’s partly because of the music that’s happening in the city — the Dirty Nil, the Arkells — there’s so many great bands doing wonderful things to get people down there. And then the art and the art crawls — it’s amazing watching it all unfold, and the community that’s there is amazing.

How has Hamilton influenced you as an artist?
I think the character of the town has had an impact. That goes back to the community of artists and musicians. You don’t have that in Toronto — everyone’s segmented and split in different genres. In Hamilton, everybody that’s a musician knows everybody that’s a musician, and even the musicians know most of the artists and half the time they’re crossing over. But the city has influenced me in a very literal way because I’ve drawn and painted many people here, even if I haven’t seen them past the moment that we met. There’s such a great character with the people that are in Hamilton. But, it’s that community that does support and drive you. As an example, the guys and girls at HAVN, the Hamilton Arts and Visual Node — they’re all McMaster alumni doing amazing things to support both the arts and music scene in Hamilton.

Who’s your favourite artist?
Right now it’s Philip Guston. He was born in Montreal and moved to Los Angeles, and he was there as a young man with Jackson Pollock. He went to New York and was a huge part of the abstract expressionism movement. He was very successful, and at one point he got sick of what he called the ‘purity’ that came with abstract expression- ism. So he disappeared for a couple years and started on a whole new style of work. It’s really crude and cartoonish, focused more on the colours and the surface of the paint- ing than on imagery. He’d build up a painting and then tear it down — with a pallet knife he’d scrape all the paint off and build it back up, and there are these vestiges of what was there before coming through. If you look at my newest body of work, and especially my work during my master’s degree at York University, it was heavily influenced — and still is heavily influenced — by him. It was only toward the end of his career that he got noticed for his newer work. It’s just such stunning work to see in person — it’s really crude when you look at it on a computer screen, but I’ve been lucky to see some of my favourite pieces in person.

Who’s your favourite musician that you don’t like to tell people about?
I probably have way more than I should probably admit. I love the new Rihanna, Paul McCartney, Kanye West track. It’s so strange but I love it. And everybody that I thought would love it with me and that normally loves my guilty pleasures, doesn’t want anything to do with it. I love the new T-Swift, it’s all great. And the one I always go to, which isn’t really a guilty pleasure, is Florence and the Machine.

There’s a zombie apocalypse. Where do you go in Hamilton to survive?
I’d go to the waterfront. I’ve always had this theory that you’d have to go out and live at sea to survive. My grandfa- ther was on HMCS Haida, so I’d probably try to steal that and go out to sea. Although a sailboat would actually be ideal, because you don’t have to fuel it.

How would your best friends describe you?
Hopefully they’d say ‘competitive’. My best friends and I are always competing over something, so I hope they would think of that. I think that’s a huge part of why I was painting so much in my undergrad — I wanted to beat everybody in my class. Apart from that, hopefully goofy and funny. Maybe creative.

How talented are you?
Not talented enough. I think talent is a funny thing — it’s kind of assumed that’s innate and you’re born with it. If that’s the case, then I’m not very talented at all. If it’s something you can practice, I’m definitely getting more talented and I’m working my way there. But in my head the images of the paintings I want to be doing aren’t where I’m at.

If for some reason you could never be an artist again, what would your ideal backup be?
Being the captain of a sailboat is something I would really enjoy. I’m allergic to fish, which is a huge problem for me on the sailboat thing. But I love cooking and I love trying new food. If I wasn’t allergic to fish then I would love to be a cook, in a similar vein to the creativity you get from painting and music. Also, if I was funnier I’d like to be a comedian.

How many 10-year-olds do you think you could defeat in a combat situation? Like, what amount of 10-year- olds do you think you could handle before they would overpower you?
Probably not very many. My strategy would probably just be kicking. A lot of kicking. They’d be waist high hopefully, so if I’m just kicking… maybe four? If they knew what they were doing and had a plan, four would be it. I’d assume they’ve thought about how to take me down if they’re going to come and attack me. Maybe I’ll come out on top, who knows.

Tell me about the details of your upcoming exhibit.
It will be running March 12th to May 3rd at the Nathaniel Hughson Gallery on John St North. It’s titled: “Approximate People”.

Find Gord Bond online at gordbondart.com and on Twitter at @gordbond