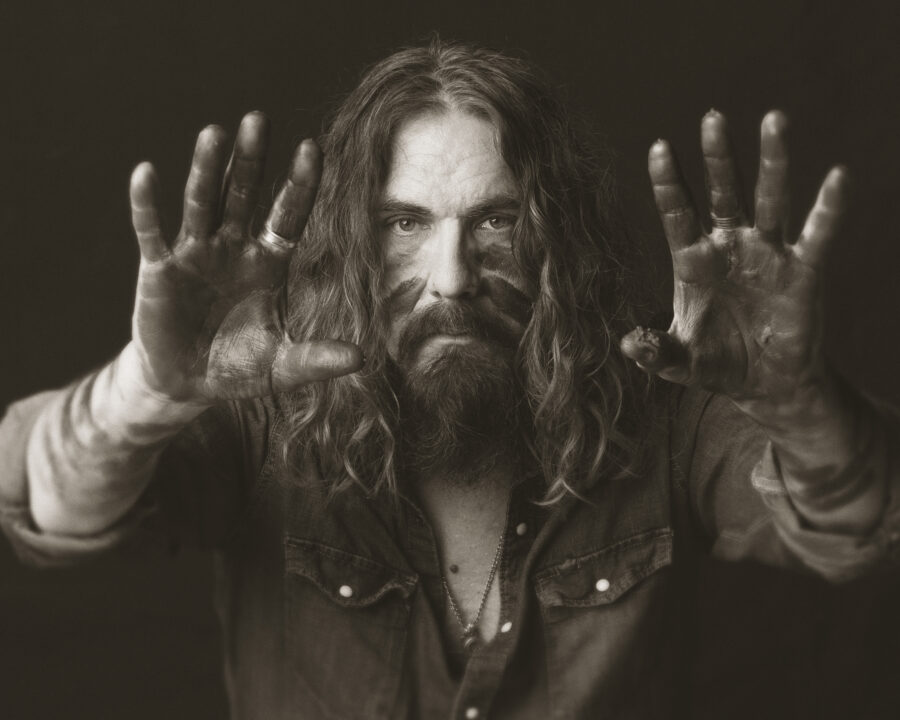 One Artist at a Time: Tom Wilson

I had the pleasure of meeting Tom at his home. Tom’s office is the authentic version of how Pier 1 tries to makes rooms look: eclectic and colourful with leather and nice wood furniture and awards scattered among the shelves. It was very cool.

His daughter Madeline was in the next room offering random commentary which added to my enjoyment. He is certainly a cool guy. His answers to questions, at times, swayed from the topic at hand but I’m including some of that here because it’s authentic and I found it interesting. I hope you think so too.

What are you up to?
I’m becoming an artist at 56. Men in their 50s — maybe women in their 50s, I can’t speak for them because I’m not one — finally accept that they can only be themselves.
You struggle as a young person trying to define yourself as an artist, and trying to accu- mulate as much energy and experience in life so that you can feel that you merit yourself as an artist. Often that takes on some destructive paths. Sometimes it takes you on some wild adventures, and depending on if your role model is Henry Miller or Charles Bukowski, you’ve got a little bit of living to do.
So what I’m doing is becoming an artist, and I feel I’m becoming a man. When people enter their 50s they all are artists because they can look back at their lives and see that they’ve actually created something. They’ve still got a ways to go, but they can look back and see that they’ve created this work of art that’s their lives.

What I was saying about men in their 50s, we struggle with all those things the same way you struggle to become an artist, or trying to be an astronaut, or Johnny Thunder from the New York Dolls, or you try to be a cutthroat business person. Whatever it is you’ve tried to define yourself within this world, you realize in your 50s you can only be yourself and you wind up answering questions really, really longwinded like this, because what the fuck — you asked me.

What’s your favourite outdoor place to hang out in Hamilton?
In my 20s before Hess Village had been turned into the vomitorium that it’s become, there was just one bar and a bunch of houses around. It was really interesting and cool — which I’m sure it’s still interesting and cool in its own way, but there was less vomit back then.

One of the reasons I bought this house is I used to spend a lot of time drinking in what we used to call reservoir park. We used to walk up there and I’d bring girls up there and drink until the sun came up. So I used to love that space, but they kind of ruined it — they had to redo the reservoir, which was a necessity. Now it seems like the res is going to have to skip a generation of people going to visit it because they fucked it up.

Where is your favourite place to perform in Hamilton?
That’s kind of tough. A lot of places are gone…Not long ago I was driving along Barton and I was looking at all the bars. I was like ‘wait a minute, I used to play all these different bars along Barton’ and there wasn’t any indication they’d been there.
Then we came up to what used to be Hanrahan’s — I think it’s Hamilton Strip or something like that — and I thought about acts I’d seen there. Billie Holiday played there. She used to stay with Brian Griffith — he’d wake up in the middle of the night and Billie Holi- day would be at his kitchen table. When black artists travelled they couldn’t stay at the Con- naught so they stayed with black families.
Brian’s gone now, but he used to tell me about that. Brian was a Washington, and in the black community it was really the Washing- ton family that was Hamilton’s musical family. Brian would say “oh yeah, man, Billie Holiday’s hanging out at my mom’s house, up in the mid- dle of the night drinking gin, talking and smok- ing cigarettes in the kitchen.”
So, as far as places I’ve played, there are a lot of ghosts in this town. One of my favourite places I used to play was The Golden Garter, which was Hamilton’s home to surf ‘n’ turf, although I never saw any food come out of the kitchen. It was on Dundurn, where Zarky’s is now. Ronnie Hawkins and The Band played there, King Biscuit Boy… it was the best place to play.
Best place to play now? Oh hell, I don’t know. I mostly like hanging out at This Ain’t Hollywood and The Casbah. I saw Terra Light- foot play at Mills Hardware and I thought that was a great venue. I don’t actually play Hamilton that much.

Describe the influence that music has had on your family.
My kids feel like they were born into it, it’s like the family trade. If you grew up and your mom was raising horses, you’d learn how to take care of a horse — it would be part of your daily diet. So, I think being around music and being maybe inspired and connected to people physically playing music, my kids also got used to people who couldn’t handle life because they were playing music. They got an understanding of what surviving as a musician is about. They grew up in a household where if I wasn’t playing music I’d be doing something to sur- vive, because I’m less of an artist and more of a carnie. They grew up with people coming through the house at 3 a.m., bands from Chicago, bands from Toronto, people crashing on the couch, and waking up in the morning to go to school and having these people hanging around the house.

So they understood that playing music isn’t a quaint little hobby that you pick up because you’re between classes or deciding what to do with your life. As a result, they treat it with respect. My daughter, luckily, got on the business side of things. She road managed a tour with Ron Sexsmith and I when she was 14 years old, and she knew how to get it all together. She knew how to organize people and what needed to be done next. When you have to think on your feet and you’ve been around survivors, you can probably do any job. So she promotes shows and manages Blackie and the Rodeo Kings and myself and takes care of business, and yells at me.
My son Thompson was always musical. He attached himself to music and he’s quick as a whip that way. He’s naturally talented, and as a human being he’s like Buddha. He used to be with Harlan Pepper, but he performs solo now. He’s working with Sony/EMI Publishing.

If you weren’t a musician, what would your backup job be?
I’d probably be in jail.

What’s your guilty pleasure?
No pleasure should ever constitute any kind of guilt.

There’s a zombie apocalypse in Hamilton. Where do you go for safety?
I’d have to say city hall, because there’s already zombies living there. I think that’s a bit of a generational question for anyone from Made- line’s and your age down. We were more afraid of the Nazis as kids.

What’s your favourite song of yours?
I got asked a little while ago ‘what’s your favourite song’ and the answer was ‘the one that’s being written in my head right now’. It’s always the next thing that you’re doing.
I like a song called The Bottom of Our Love that’s on my new record. It was written for Blackie and the Rodeo Kings but they didn’t want it, so I did it with my son, Thompson, on this new album. Every night I get to step up to the mic and do that song, and I feel completely connected to it. It was written about (former music venue) the Running Pump.

Why have you stayed in Hamilton?
I’m back in Hamilton because we didn’t want to be away from my kids for another second. Then Madeline started having babies and I didn’t want to be away from them either. I can get on my bike and I’m three minutes away from her house, and Thompson lives a block closer.
I’m still here because of family, and with what I do, it doesn’t really matter where I live. I lived in Los Angeles when I was young and that didn’t go so well. I lived in Toronto for a while, I lived in Halifax off and on. I was very transient. But there’s something that is more inspiring to me here than anywhere else.
It’s really great to go feel the depth of his- tory in Europe, and it’s great to feel the spirit of music in Memphis, New Orleans and Nash- ville. It’s great to stand at the bottom of the Rocky Mountains and feel spiritually connected to the universe. But, there’s nothing more inspiring than Hamilton and the people of Hamilton. I find this truly one of the most interesting places. You’ve just got to open your eyes and see it. Once again, a little more understanding of yourself comes from your surroundings. So if you’re from here, you’re likely to be a little more interesting than if you’re from down the road.