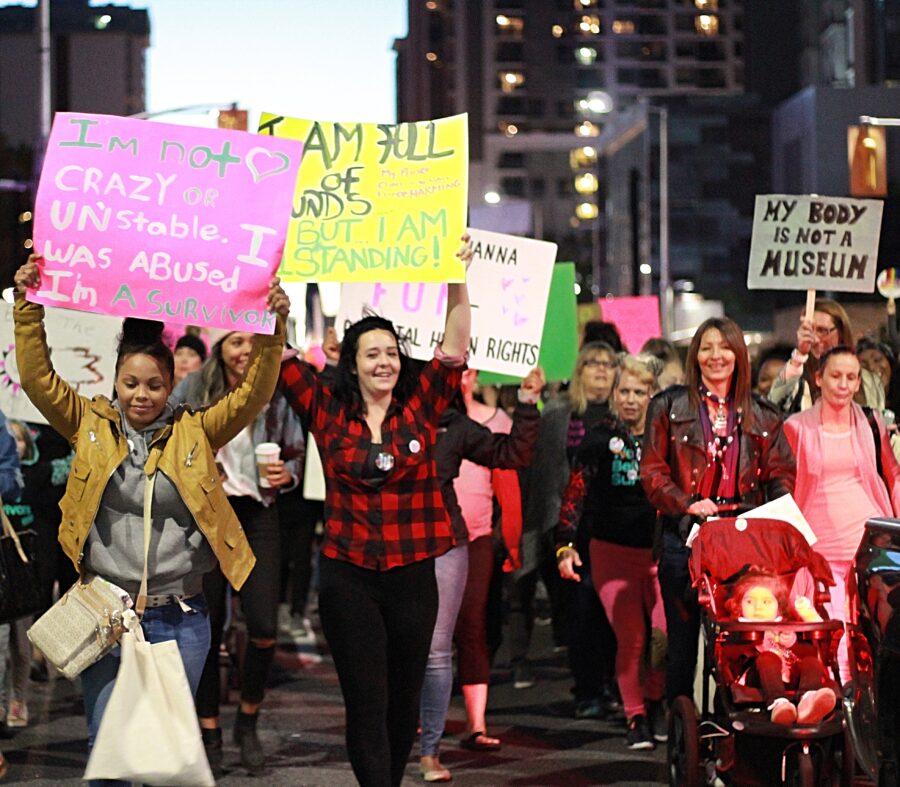 Every September women, non-binary folks, and their kids gather at Hamilton’s City Hall to remind our community that sexual violence is a serious issue. Take Back the Night (TBTN) is a global tradition that has been happening in Hamilton for thirty-seven years.

This year’s theme is Resurgence: Celebrate Indigenous Women. The organizing committee chose this theme after seeing the #Canada150 celebrations last year gloss over Canada’s history of genocide and colonialism. Many Canadians have no knowledge of Canada’s plan of violent assimilation that includes the reserve system and residential schools.

This violence continues today. Indigenous women are three times more likely to experience violence (sexual assault, robbery, physical assault) than non-Indigenous women. There is a reserve to prison pipeline in Canada: Indigenous folks are 26.4% of the Canadian prison population while they are only 4% of the general Canadian population. Canada has a national crisis of missing and murdered Indigenous women, girls and Two Spirit folks (MMIWG2S). It’s estimated that over 4000 Indigenous girls, women, and Two Spirit folks are murdered or missing. The UN Human Rights Council has even called out Canada multiple times for ignoring the MMIWG2S crisis.

So often, when we talk about Indigenous peoples in Canada we focus only on the negative. At TBTN, we want to celebrate the women, girls, and Two Spirit folks who are making changes in our communities. We want to highlight resiliency, strength, and everything Indigenous folks are doing to ensure their communities stay alive. We recognize that our event happens on the traditional territories of the Haudenosaunee, Mississaugas, and Anishnabee – governed by the Dish With One Spoon wampum.

Take Back the Night will start with a gathering at the forecourt of City Hall. Over thirty community organizations will come with activities to connect the work that they are doing to end sexual violence. The vibe is celebratory. Kids are welcome and encouraged to come.
During the rally, we will celebrate with local artists who share their singing and dancing with us.

We also get ready for the march by warming up our bodies with stretching.
By far the march is the most anticipated part of the entire event. It is hard to put into words how empowering and energizing it can feel to take to the street with hundreds of other people who are loud and passionate about ending sexual violence. Alberta, a TBTN committee volunteer, describes it as “I’m elated. I don’t get this feeling the rest of the year.”

Other committee members march for different reasons: “I’m a victim of sexual assault from family members ever since I was five years old. This year it means even more to me because I’ve been talking with my brother about why I’m still vocal about the abuse all these years later,” explains Aileen.

For TBTN performer coordinator, Laura Kooji, this year’s theme is truly personal:
“I’m excited about amplifying Indigenous women at TBTN this year. Every year that I walk with TBTN, I keep all missing and murdered Indigenous women, girls and Two Spirit people in my heart. Having TBTN putting Indigenous women at the forefront of this year’s march is a powerful statement of solidarity and shows relationship building with the Indigenous community.”
We adore the support of male allies speaking against sexualized violence. Men are invited to cheer us on from Gore Park.

For more information about Take Back the Night visit sacha.ca