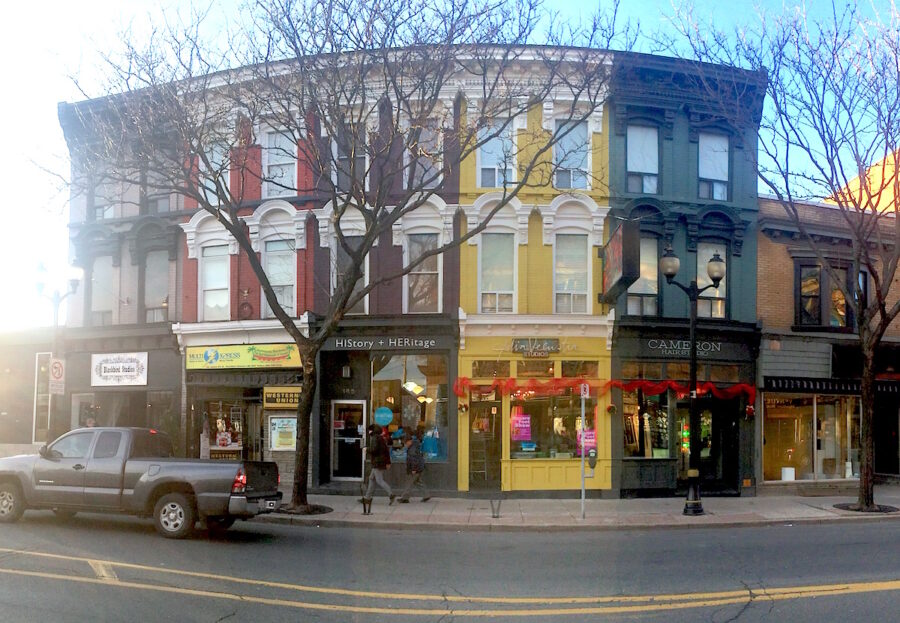 Shopping local for the holidays

Have you ever walked around Limeridge Mall during the holiday season? It’s a frenzy. You’d think every Hamiltonian is doing all their shopping just there, but perhaps that’s not that case—well, not ‘perhaps’; it’s not the case. In fact, according to some store owners in the James North district, more and more people are turning to independent shops for their holiday gifts every year.

“I think there’s been a big shift in the way people perceive retail,” said Hollie Pocsai, co-owner of White Elephant, an arts, clothing and accessory shop on James North. They’ve been there since 2008, with a window seat to the James Street revival.

Pocsai says people enjoy shopping at a store where they know that what they’re buying is hand-made, local and not mass-produced. Shopping local “takes a little bit more effort,” she said, which isn’t necessarily a bad thing when buying for loved ones.

“The holidays always have a boost in traffic,” said Pocsai. “We definitely see a lot more focus than we do day to day in September.”

Buy why? I mean, here are the facts: Fashion accessories at an independent shop are typically more expensive than at Claire’s or Ardene, for instance; also, at the mall everything is in one giant, comfortable and convenient location.

Pocsai’s response is simple: Local shops and independent retail stores typically have more attentive customer service. She says she has relationships with many of her loyal customers which just doesn’t happen at the mall.

“I haven’t shopped for Christmas gifts at a mall for going on seven years now,” said Pocsai.

Mark Furukawa, owner of Dr. Disc, which has been open for 23 years, would agree. Customer service is a must in order to be successful as an independent shop.

“We’re a good place for people to come when they haven’t had any luck at HMV or the mall.”

He lives up to his customer service philosophy too. Furukawa says he’s even gone as far as personally driving to another city days before Christmas just to get an album for a customer on time.

Furukawa says that’s not why people first come, but it’s why they come back.

The Hamilton Store has only been open for just over one year, and even owner Donna Reid can see that the holiday season is a hot time of the year for the district.

“The December Art Crawl is big.” said Reid. During last December’s Art Crawl, very shortly after The Hamilton Store opened, Reid says she had a line out the door. A customer took a photo of the store from outside looking in and it was packed, she said.

For the Hamilton Store, “It’s really about loving their city and wanting to share it with people,” said Reid. Some people are buying gifts for family members that were raised in Hamilton but don’t live here anymore, and some are buying just to remind their local friends and family how interesting their city is.

Reid says in her experience and knowledge, the trend of people shopping local continues to grow.

“People are getting it. They need to support local business for us to survive.”

Isn’t that what Christmas is all about—supporting and giving to your community?