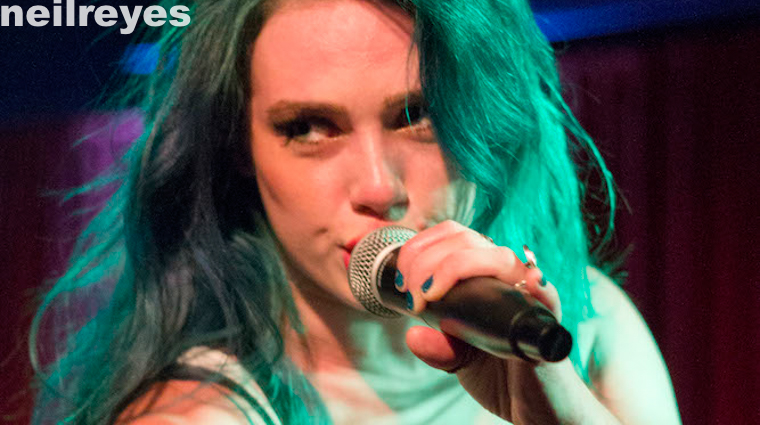 Whenever I check out a show at the Casbah, I usually take note of the room set-up. Sometimes there are a few tables set up on the main floor, sometimes more with candles. It usually depends on the genre of the bands. Regulars know when all the chairs are outside on the patio area the night will be a little bit rowdy. Such was the case for Sumo Cyco, The Hammer Antics, and Wicked Wayz.

To be honest, The Hammer Antics didn’t really open the night; they kicked in the doors and punched a few holes in the wall. Their brand of hard-edged bluesy rock had the early crowd head-banging. Lead-singer Michelle Owen had a true front-woman spirit in her performance, dancing all over the stage and powering through every big note she sang. The Hamilton-based band played their latest single, “Love”, as well as covers of Wolfmother’s “Woman” and Rage Against The Machine’s “Killing In The Name Of”. Guitarist Matt Brooks tackled the song’s solo in impressive fashion while Owen went all out for the famous lines, “F*** you I won’t do what you tell me”. The Rage cover was a perfect cap to an excellent set.

Wicked Wayz, another female-fronted band, followed The Hammer Antics, and might have fell victim to kick-ass opener syndrome. The hard rock band played a very solid set, but the energy in the room noticeably shifted. The crowd, for some reason, was hesitant to venture to the front of the stage. Still, guitarist (and Hamilton native) Spenser Bennett rocked his heart out and threw down some tasty solos, rhythm section Pete Mielke and Duane Wanders were solid, and vocalist Lisa Kim commanded the centre of the stage with her incredible vocals. Wicked Wayz sounded like a modern version of Heart, which is pretty awesome. The crowd unfortunately checked out when they slowed things down with their touching and honest tune, “A Mother’s Love”, but they quickly brought the back the energy, closing out their set with a couple of loud, hard-hitting tracks.

What kind of show do you expect with a band called Sumo Cyco? I would call it a big crazy party. And they definitely delivered. Fronted by Skye Sweetnam (remember “Billy S.”?) and featuring Matt Drake (formerly of Dodger) on guitar, Ken “Thor” Corke on bass and Andy “The Wolf” Joseph on drums, the Toronto-based band ripped through tracks from their recently released Lost In Cyco City album. The band played through three songs before Sweetnam had an opportunity to catch her breath. With tracks like, “The Ugly” and “Fighter”, the band kept the energy high right from the very beginning.

Their unique brand of metal infused with rock, dancehall, and pop elements had the crowd right up at the edge of the stage, rocking out and singing along. Sweetnam, armed with a wireless microphone, often jumped off stage to dance and sing along with fans. She would take notice of phones and pose for the camera in the middle of songs, while the band played through some of their complex riffs and time changes. The only real hiccup in the band’s set was the extended tuning required for the band’s final track and earliest single, “Limp”. Drake smiled as the rest of the band patiently waited for his guitar to reach the proper tuning. But once they played, Sweetnam gave her all for the performance, running out into the crowd, even crawling up onto the Casbah bar to sing the last verse, making it a very memorable show.