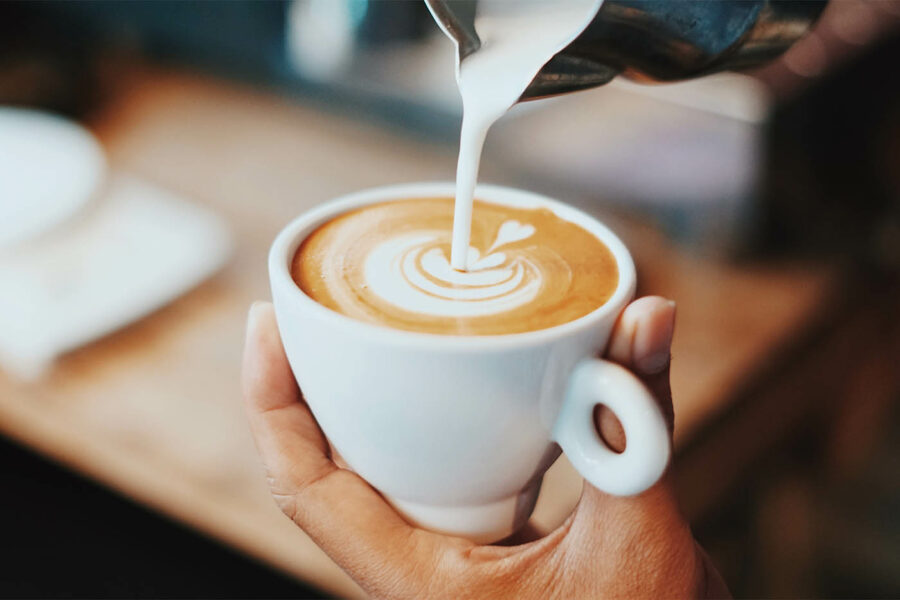 Sure, we’ve got plenty of Starbucks and more than enough Tim Hortons; but the best cups are coming out of the dozens of small, local coffee shops and roasters who put quality, care, and craft at the forefront.

Narrowing down a list of our top 10 favourites was far from an easy task, and we’re sure there will be a wide variety of opinions; but we tried to pick some standout spots from all across the city. Nevertheless, here are the 10 Hamilton coffee spots that stood out to us for 2022! 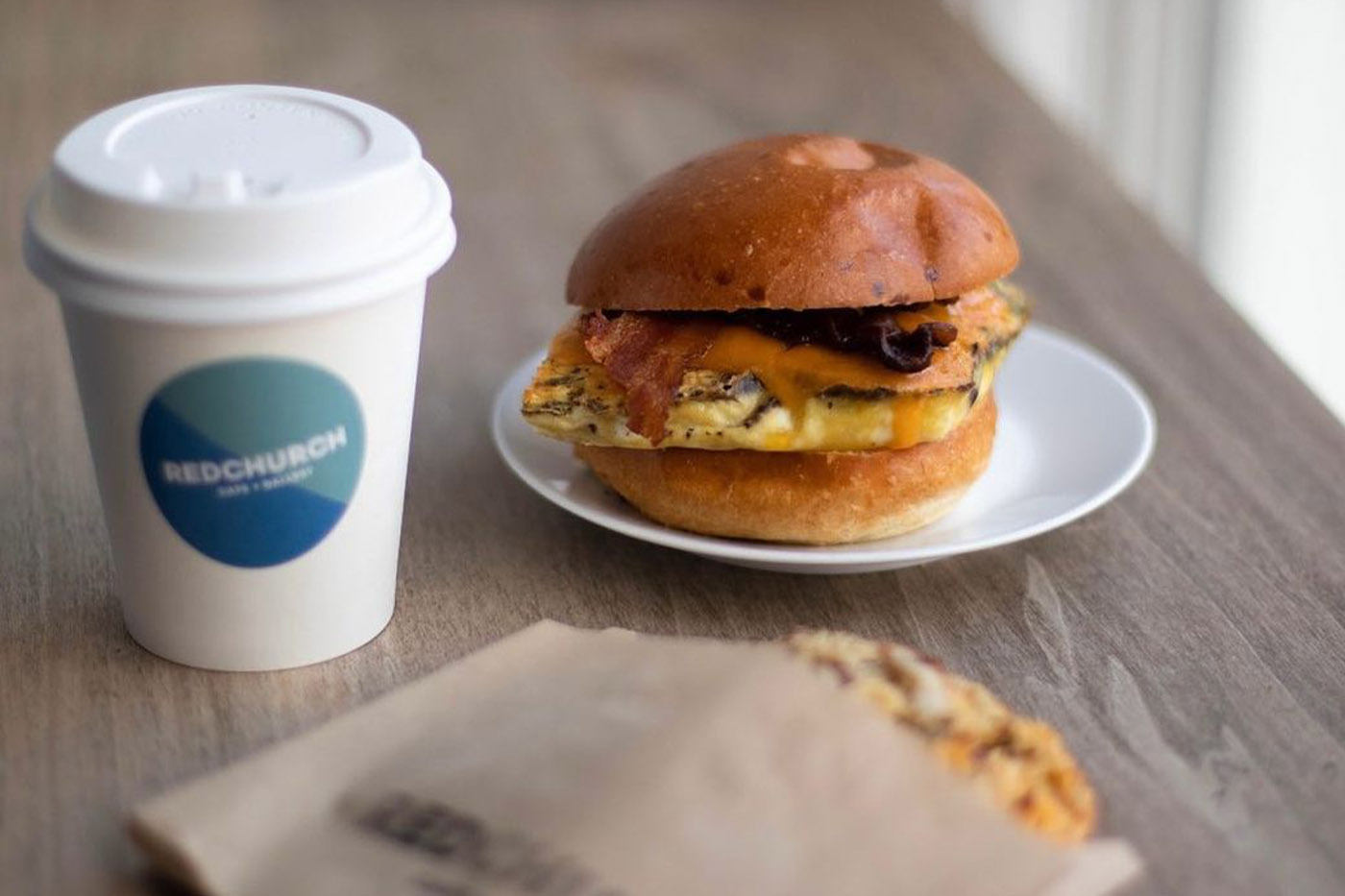 Located in a stunning central downtown storefront in the historic Victoria Hall in Gore Park, Redchurch Cafe functions as a bright and inviting cafe; a well-stocked bottle shop with local craft beer, wine, and spirits; and an art gallery with an ever-changing rotation of exhibitions and displays. 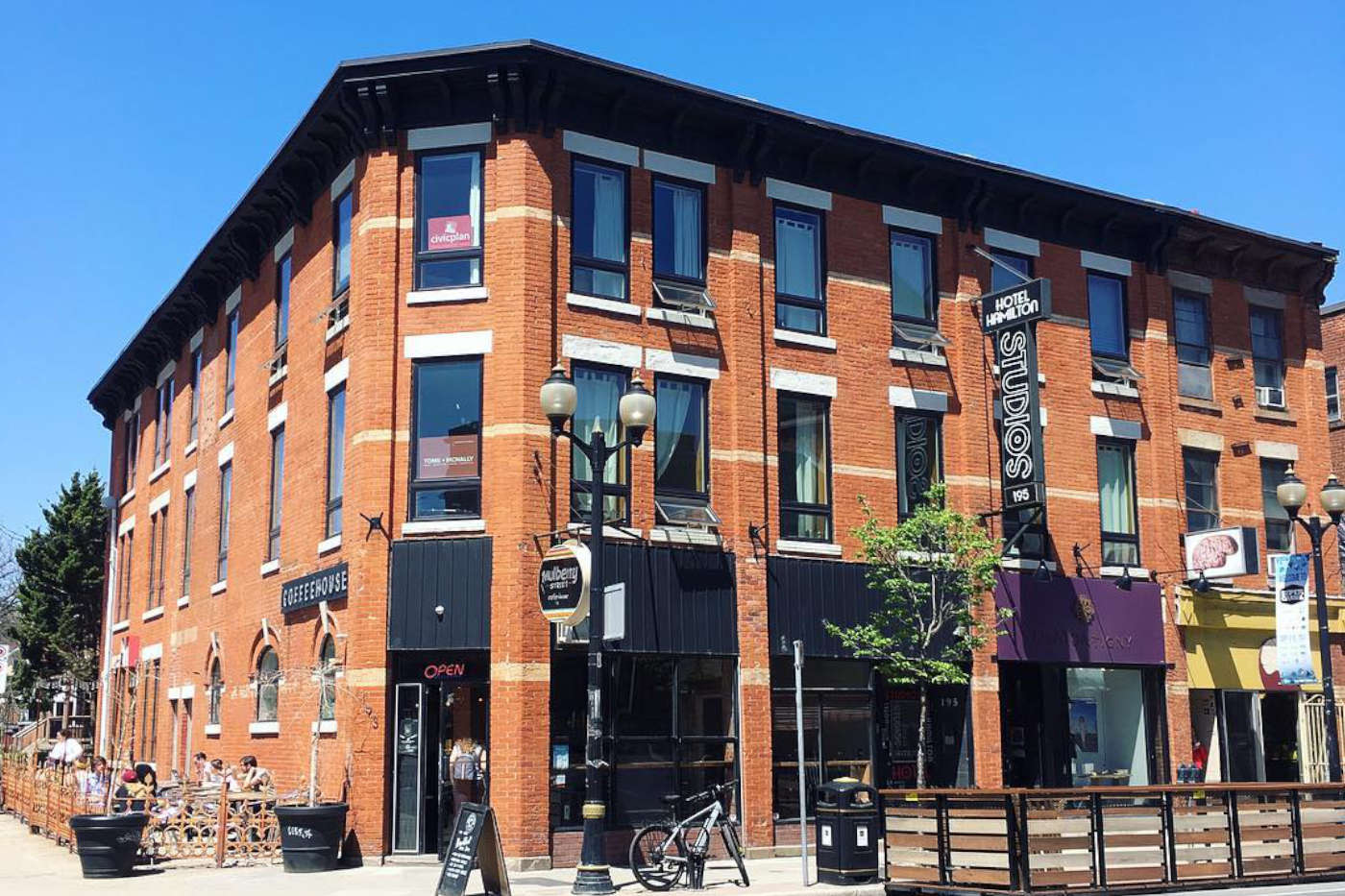 Serving up fair-trade coffee, tea, beer, wine, and cocktails alongside a sizeable menu of sandwiches, salads, grain bowls, baked goods, and beyond, Mulberry Coffeehouse has long been a go-to for Hamiltonians to meet up for a coffee date or settle in with a laptop and hang out for hours on end. Local art regularly adorns the cafe walls, cementing Mulberry as a true community-focused city staple. 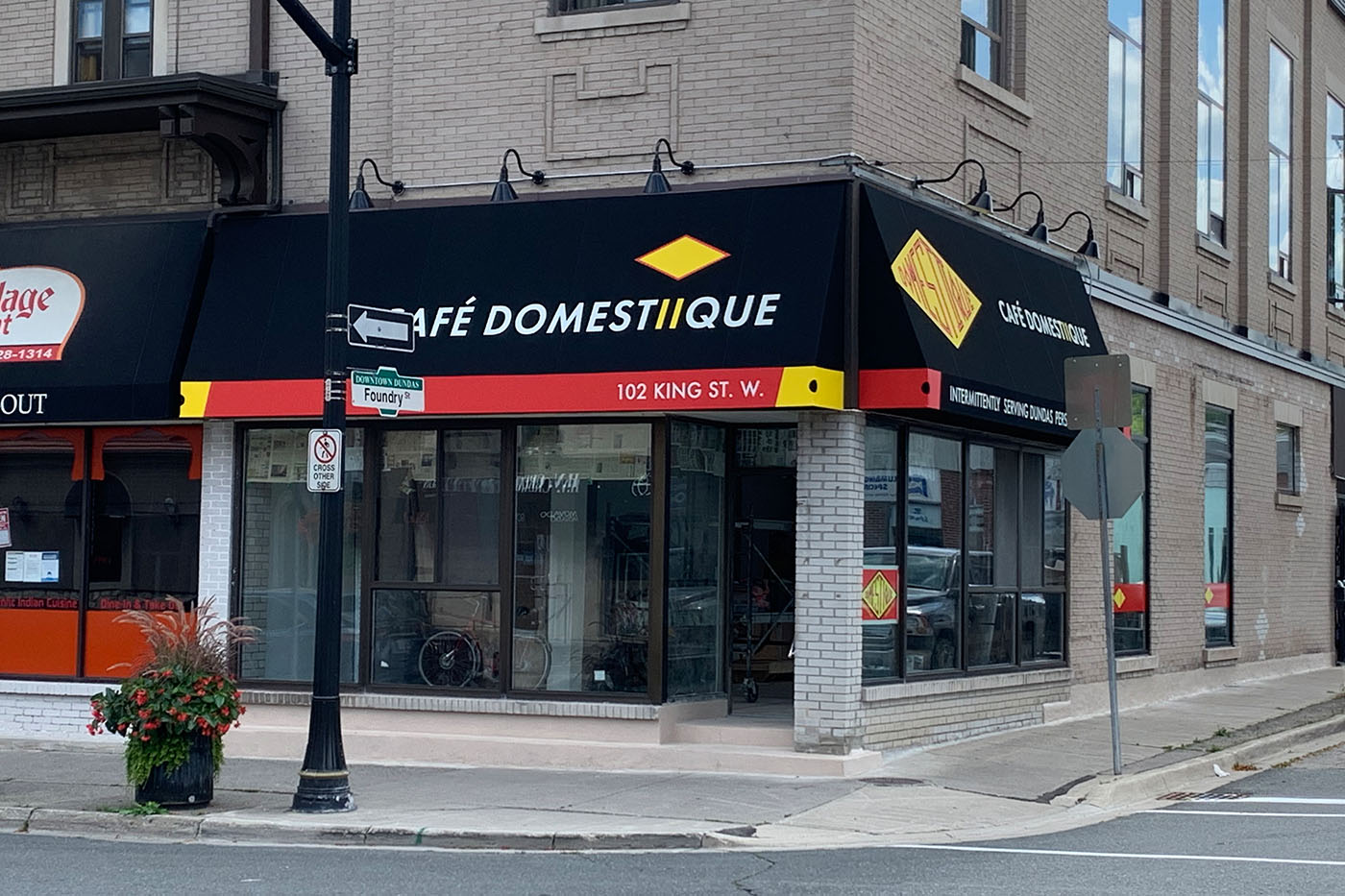 No, the double i in “Domestiique” isn’t a typo. This Dundas-based, cycling-themed coffee shop has existed in many forms over the years, from its original Domestique (with one i) cafe off of the main Dundas strip to its reinvention as Grupetto in the back of The Horn of Plenty, and recently in bright red van hidden away off of Sydenham Road.

But now, Cafe Domestiique has returned in more permanent digs at the corner of King West and Foundry Street, serving up their signature Italian-style coffee and espresso that’s rich, full-bodied, and flavourful. A hidden back patio recently became part of the operation, as did the addition of well-crafted cocktails and a menu of select small plates for nibbling. This place is a total underrated gem. 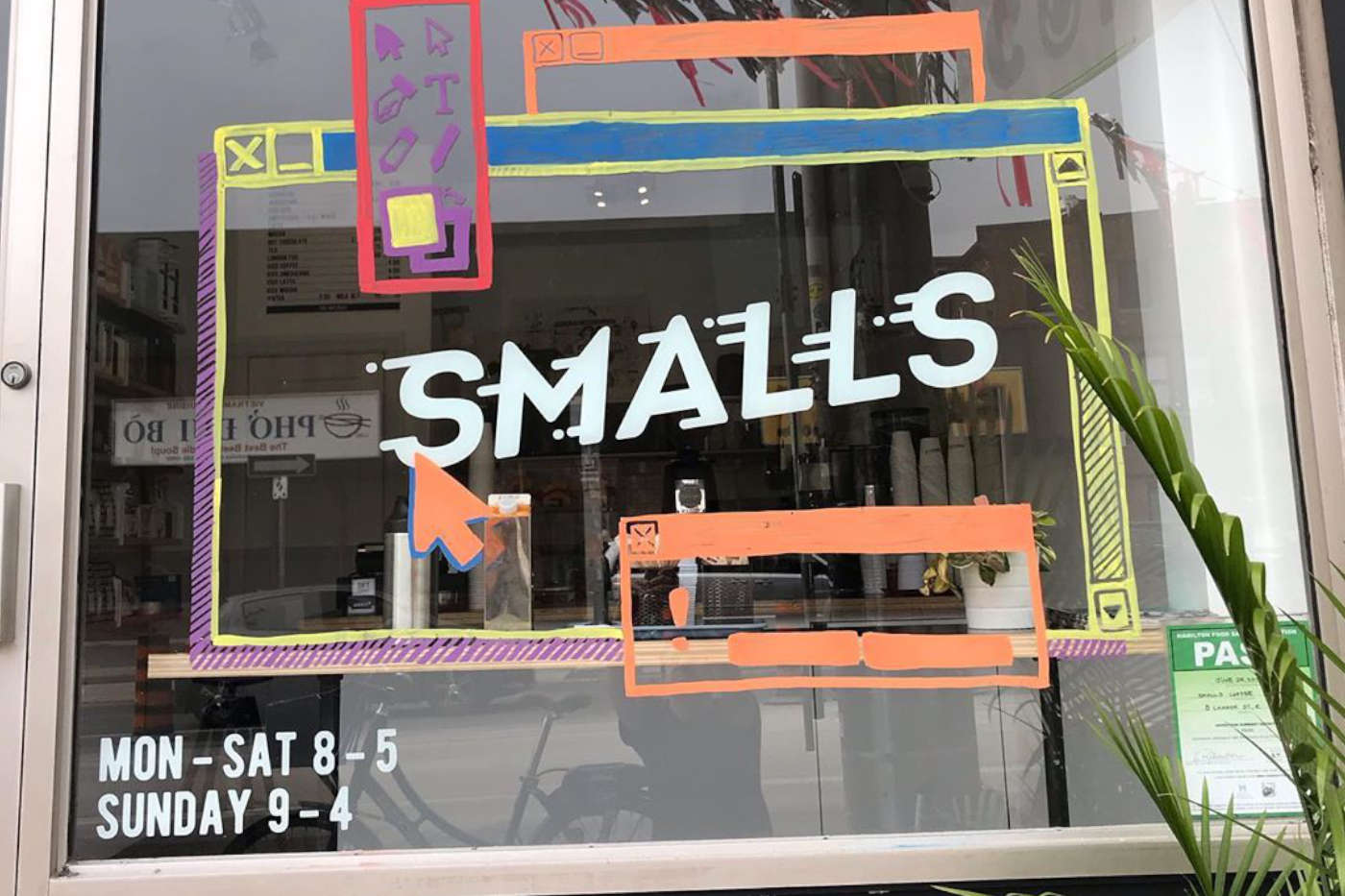 One of James North’s most popular caffeine stations, Smalls Coffee is aptly named; it continues to hold the title of the tiniest coffee shop in Hamilton, with a space almost entirely consumed by the sizeable counter, which holds a small case of daily pastries and an espresso machine. You won’t find any tables or workspace here; we’re talking strictly grab-and-go.

Luckily, the coffee (supplied by Toronto’s Sam James Roasters) is beyond excellent, with drinks crafted skillfully by some of the friendliest folks you’ll find on James North. 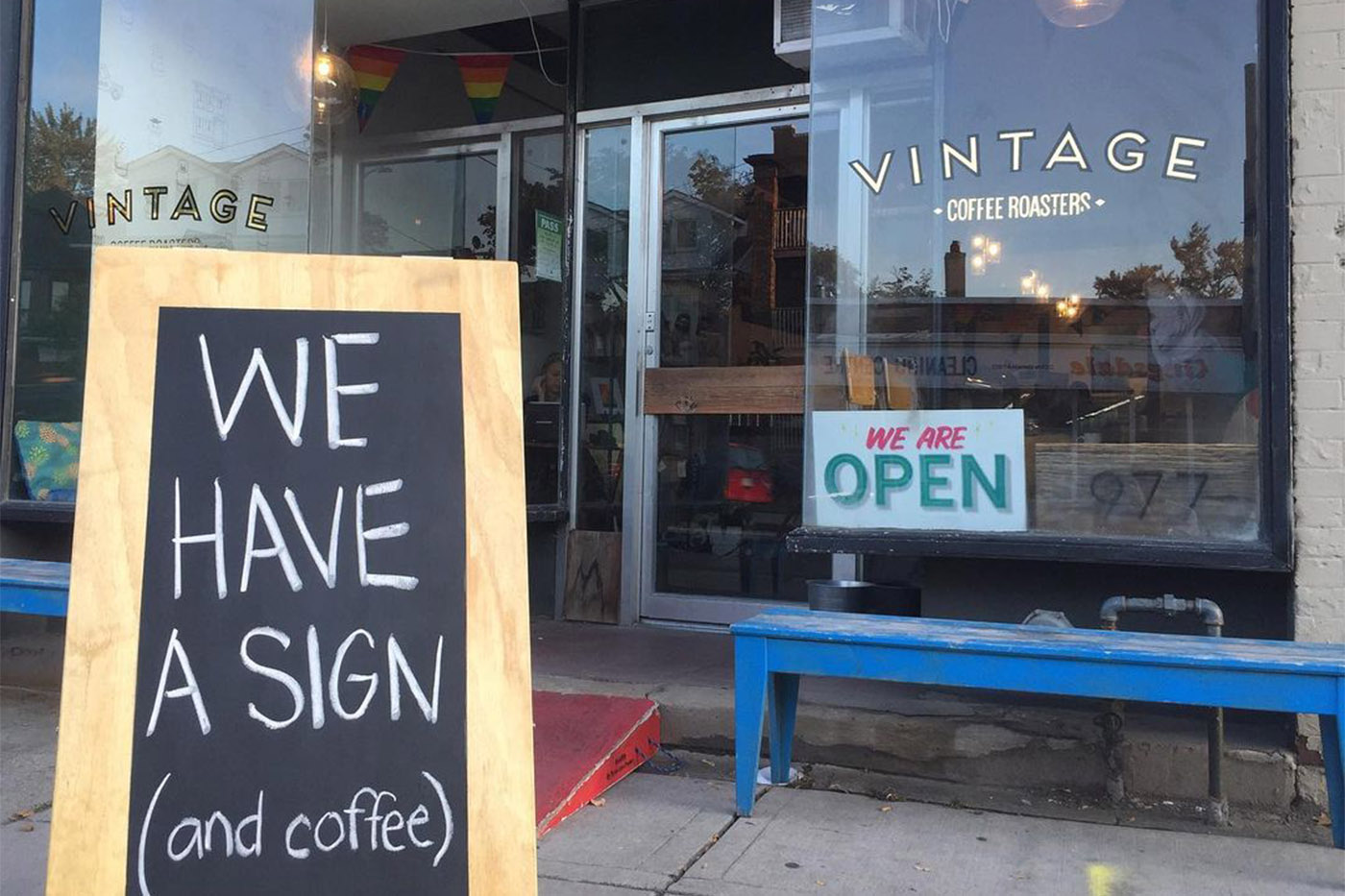 Not only is Vintage Coffee a prime spot for quality coffee and espresso, it’s also one of the only cafes in Hamilton that roasts its own beans in house.

Located along King Street East, Vintage Coffee Roasters roasts their coffee on a weekly basis, with single-origin offerings and blends from regions like Mexico, Peru, Sumatra, Colombia, Brazil, and many others. On top of that, they make some mean baked goods – seriously, try the Sweet Potato and Swiss scone – and regularly have shelves stocked with artisan products by local makers. 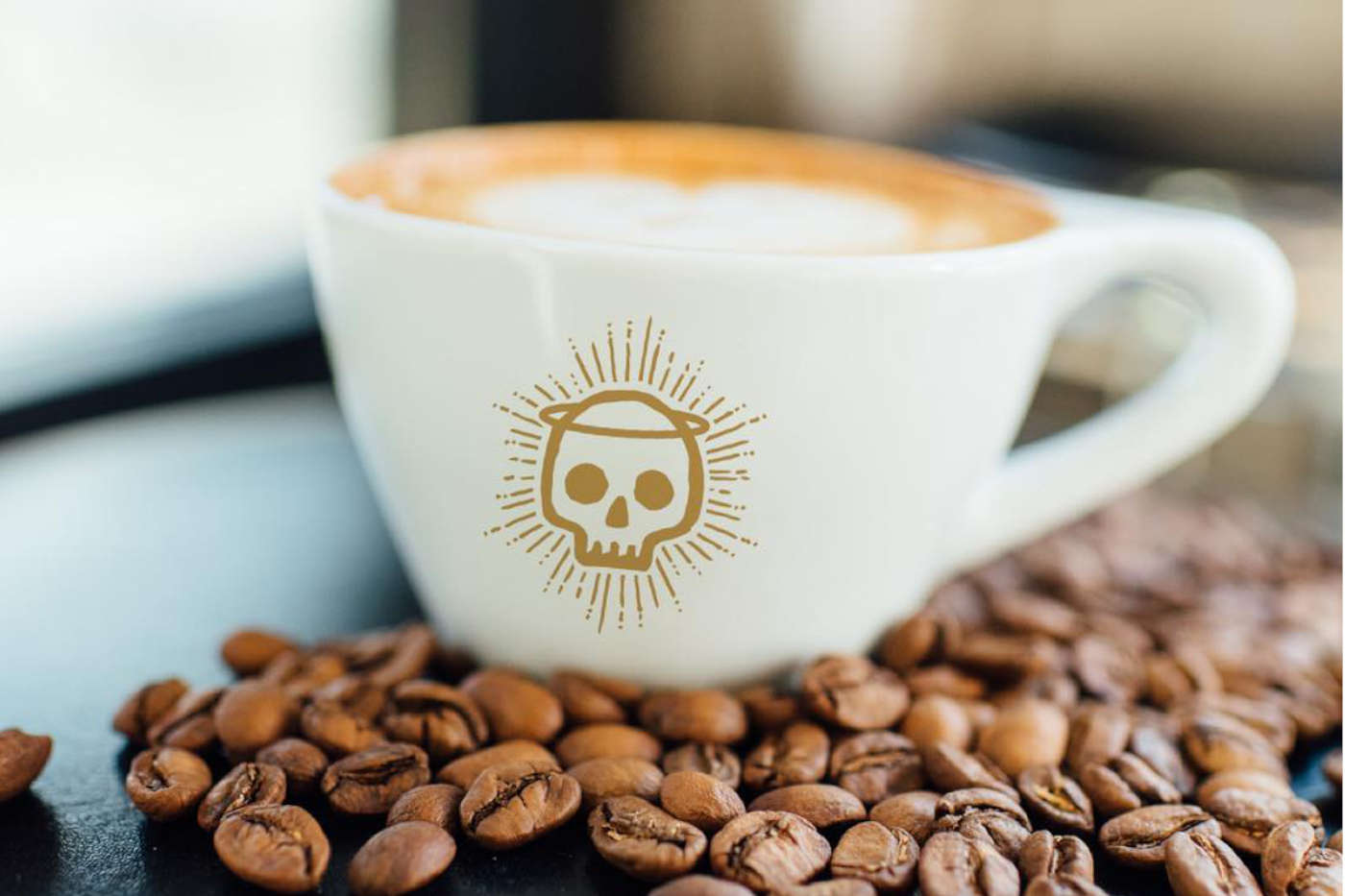 Patrons of the Saint James frequently leave saying at least one of these things: “Wow, they really know their coffee!” or “That’s one of the best brunches I’ve ever had.”

There’s a reason for that. Not only is Saint James one of many excellent spots to score impeccable coffee, they’re also infamous for churning out outstanding brunch dishes that are as delicious as they are Instagrammable. Whether you get their signature breakfast sandwich The Drive-Thru or one of their many tempting tartines,  you’re not going to leave the Saint James dissatisfied. 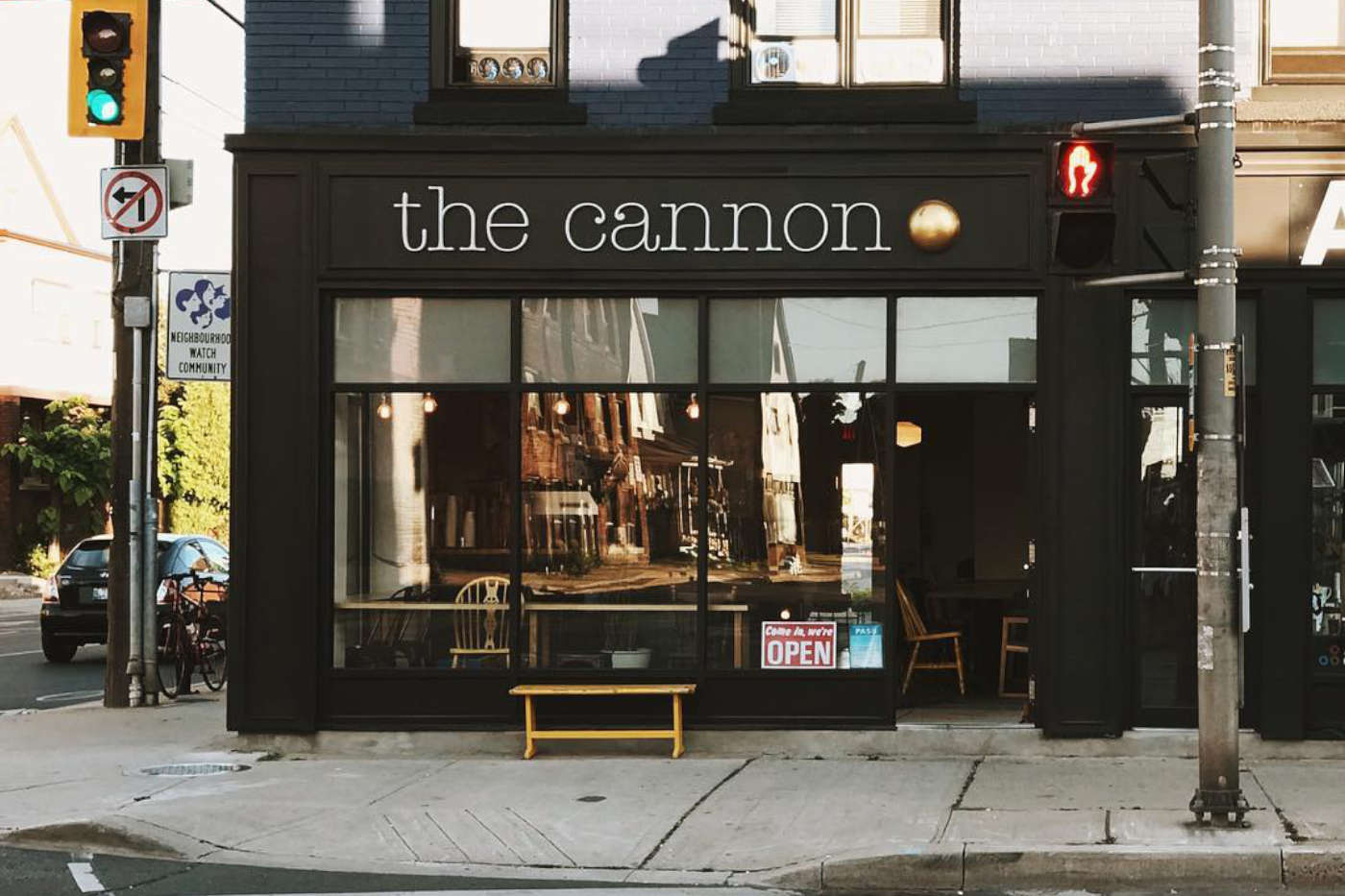 Yes, the coffee at Cannon Coffee Co. is terrific. The Crown Point cafe is a perfect place to grab a hot cup of something delicious. But if you don’t also grab one of the Cannon’s gigantic, mouthwatering waffles or waffle sandwiches alongside that cappuccino, you’re missing out big time.

Academy Award-winning film director Guillermo del Toro calls Cannon’s waffles the best he’s ever had. Yes, they’re that good. But even if you’re not that hungry, the Cannon is still well worth a stop for its relaxed vibes and exceptional coffee, brewed using beans sourced from some of Canada’s most noteworthy roasters. 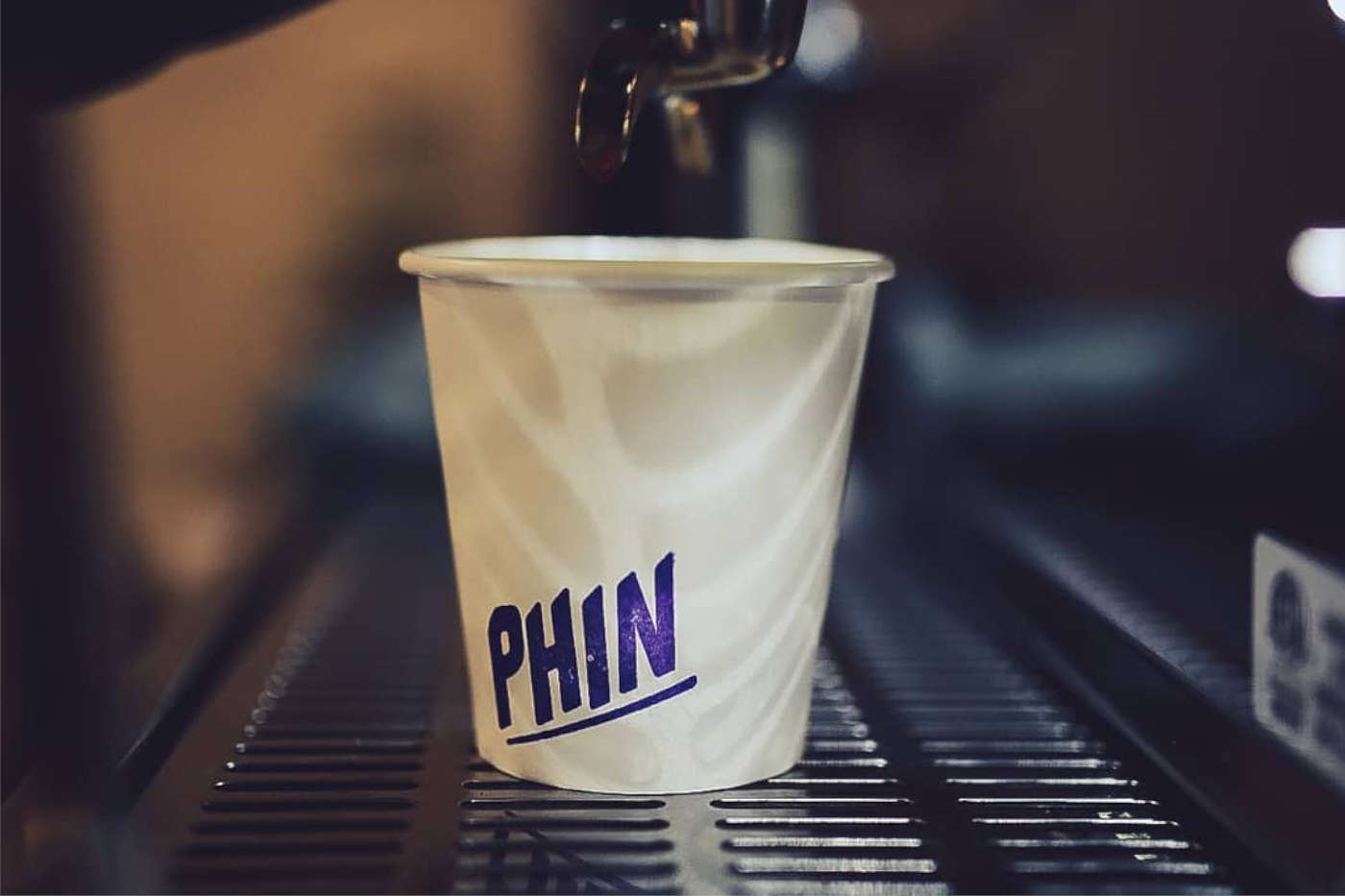 Located in Westdale Village near McMaster University, Phin Coffee Bar has proven itself to be one of Hamilton’s gems for a brimming cup of the good stuff.

These friendly folks get their hands on some very hard-to-find coffee beans, and they do those beans justice with expert, loving technique. Phin Coffee is also easy to miss; attached to a narrow section of a fitness gym with only a sandwich board to alert passersby of the caffeinated goodness that awaits. But keep your eyes peeled for it, and you’ll be rewarded with some of the city’s best coffee. 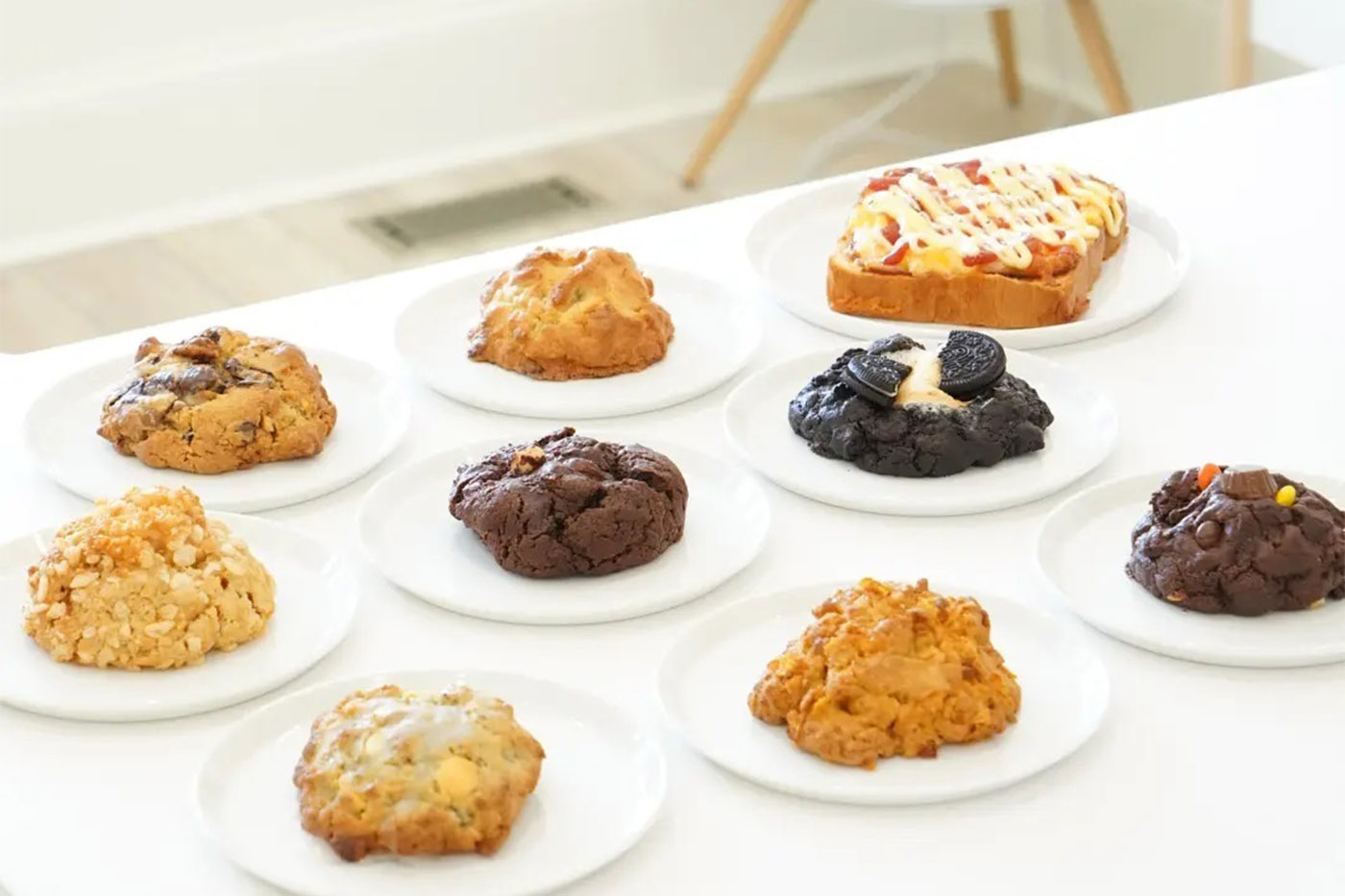 One For All Coffee + Desserts

One of Hamilton’s newest coffee shops has readily established itself as one of the best.

Owned by a husband-and-wife team and located on King Street East in the International Village, One For All’s sleek white space is home to coffee and espresso brewed meticulously with clear craftsmanship and using beans sourced from some of the best roasters around the world.

But of equal draw here are the mouth-watering cookies baked in-house every day. Thick as the top of a cupcake and sumptuously soft, One For All’s cookies are easily some of the best in the city, with flavours ranging from a classic chocolate walnut to more unique flavours like matcha & macadamia or their s’mores and Oreo mashup called the S’moreo. If you can stop at One For All for a latte without taking home a half-dozen cookies too, you’re much stronger than I am. 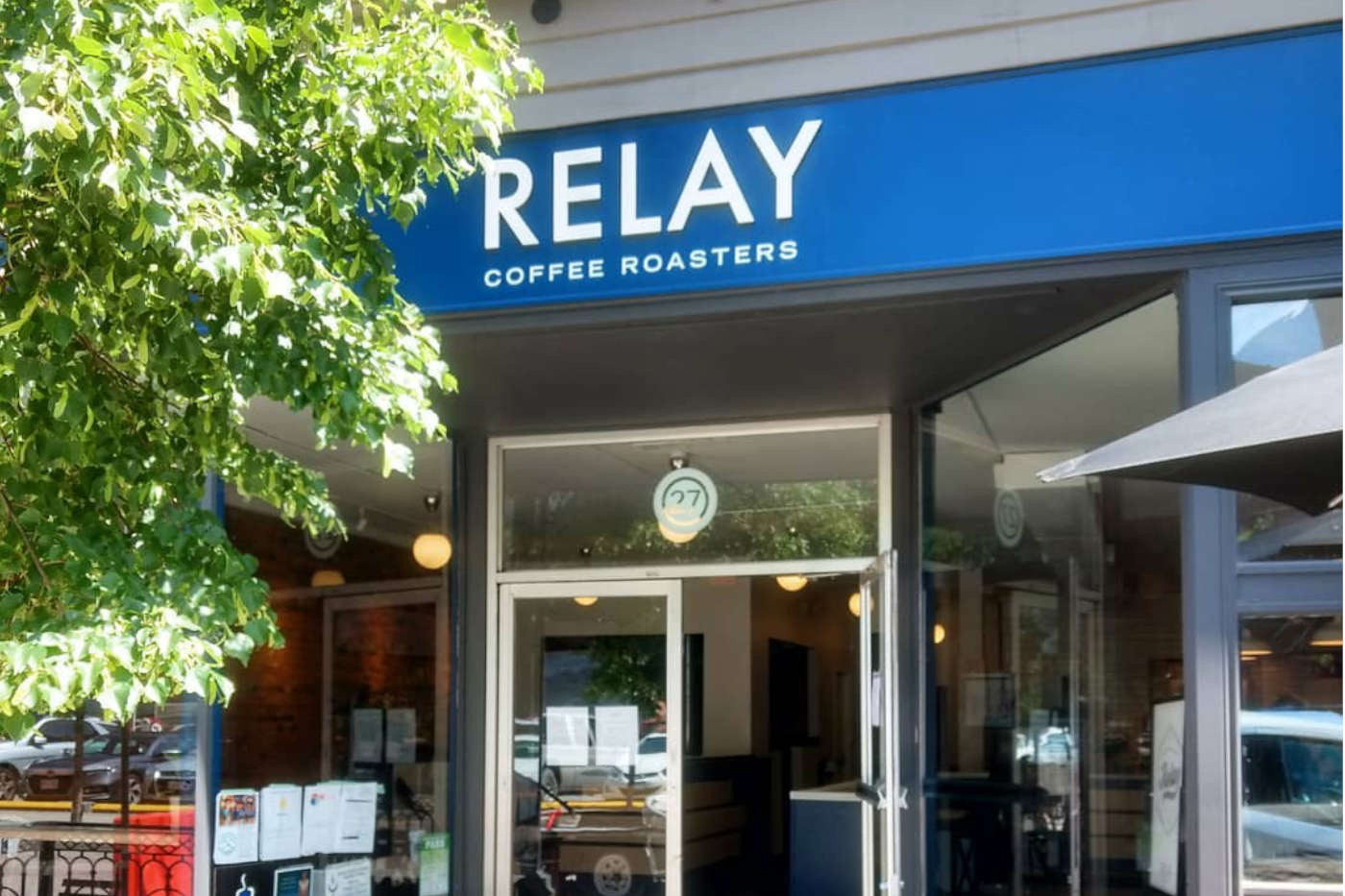 RELAY Coffee is quintessential Hamilton. Owned by husband-and-wife team Jason and Rachel Hofing, this O.G local coffee roaster has been filling cups and connecting with the local community since 2008 under its original name, Red Hill Coffee.

The famous stand in the Hamilton Farmers’ Market later expanded to a sizeable cafe on Concession Street, which sadly closed upon RELAY’s move to a larger space by the corner of King William and James North; a space which previously held the fondly-remembered Rust City Brewery and Homegrown Coffee.

In many ways, the central downtown location in the heart of our city feels like the home RELAY was always destined to be in. Simply put, Relay Coffee Roasters is as Hamilton as it gets.

Looking to explore more LOCAL coffee spots? Then be sure to explore our search page!