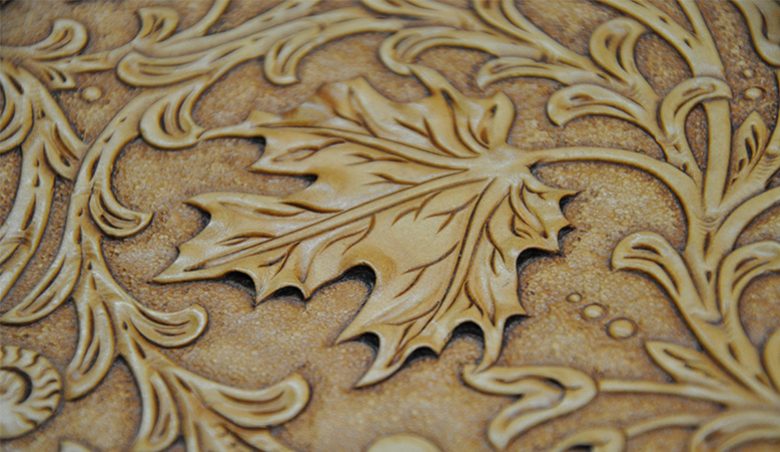 The Best Kept Secret In Hamilton

The Next Generation Steps Up at Tundra Leather

When you walk through the doors of Tundra Leather the distinct smell hits your senses. The colourful and eclectic style of the shop guides your eye to the many shelves that feature hand-made messenger bags and purses. The shop is cozy and charming. The walls are decorated with an array of tools and supplies.

At the helm of this long-time family owned business is Kristi Grove Cino, a 31-year-old determined to continue what her father started 25-years-ago. She sits quietly at the back of the store, answering phone calls, filling orders and making sure the business is running smoothly. Her smile is bright and genuine just like her personality. Next to her is Sean Dalgetty. He’s surrounded by a collection of tools and a sewing machine while he stands at a work table, putting the finishing touches on a custom order of dog leashes.

Cino took over the business after losing her father – Peter Grove – to brain cancer in May 2015. Grove was 59 at the time.

“This was his life,” Cino said of growing up in her father’s shop. As a child, she watched and learned from him. Though his passing took a toll on her, she didn’t question her next move quitting her job as finance assistant at McMaster University to take over running the store before her father died.

“I didn’t know if it was going to work,” she said. “My mom was supportive. My husband was supportive and that’s all that mattered to me.”

The charming downtown business is located at 313 King Street East, just west of the Wellington Street gates in Hamilton’s bustling International Village. But this isn’t where Tundra Leather started. Grove began working at Tandy Craft when he was just 12-years-old washing windows and mopping floors in exchange for tools and supplies, then selling belts and wallets door to door.

He stayed with the business, refining his art until 1991 when Tandy Craft closed several of its retail locations including its Hamilton store. Convinced he could “go it alone”, Grove decided to buy the store and its inventory. Several years later, Grove hired Sean Dalgetty and moved to its current location.

Dalgetty was Grove’s right-hand craftsman for two decades. He watched Cino grow up and now she depends on him; his artistic talent, his knowledge and his skills.

At Tundra Leather, you’ll find all the things you need to create your own project from different types and colours of leather, furs and skins to dyes and other essentials.

Dalgetty does all the custom leather work filling requests for items like; briefcases, tote bags, pouches, belts, wallets as well as accessories for gun clubs, the military and even re-enactors.

While the majority of their work comes from people who walk in off the street, Dalgetty says they have gained world-wide attention.

“Being a destination store we do get a lot of people contacting us through email,” he said. “Last December we did a custom Santa belt which we sent down to Georgia.”

This year, Cino says has been their “best year ever”. She attributes that to mirroring her father’s unwavering passion for customer satisfaction as well as social media.

“He would be happy his name was getting out there even though he isn’t here,” she added.

She says having regular Do-It-Yourself classes hosted by Dalgetty have also been beneficial to retaining a strong customer base.

“We want people to know they can do leather work. You can make your own belt, your own bag,” she said. “Doing it yourself, it’s going to last you forever … People are gravitating to things that are going to last and this is where you get that.”

With the construction of LRT looming, Cino and Dalgetty agree they’ll embrace it.

“We made it through the other parts which makes me think we’ll make it through this part,” Cino said. “Our strategy is social media, use the back door if we have to and just to be positive.”

Cino certainly is ambitious and has her own vision for keeping her father’s legacy alive. At the core, she and Dalgetty agree, Grove’s strong business sense and passion for his customers are the pillars of a successful venture.

“If we make it, it will last forever.”