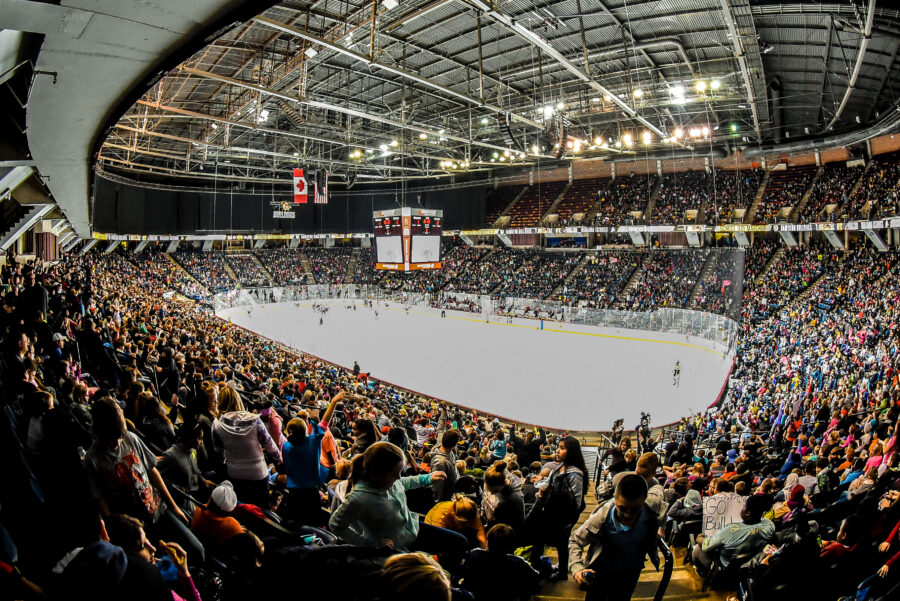 On-ice endeavors aside, this team is a significant contributor to the economy of downtown Hamilton

October. The beginning of another hockey season. In downtown Hamilton, that means that we’re about two weeks into the Hamilton Bulldogs’ third season of their Ontario Hockey League return. And I’ll lay my biases out nice and early here; I’m a big fan of OHL hockey and applauded the team’s shift from being the Montreal Canadiens’ American Hockey League affiliate to a team that actually represents Hamilton.

On-ice endeavors aside, there’s much bigger reason to be a Bulldogs fan. This team is a significant contributor to the economy of downtown Hamilton.

Living in this city provides us with the chance to enjoy a variety of entertainment options. We have the venues to score some headliner concerts, internationally acclaimed stage shows and other renowned performers. And the arts district of James Street North gives us the chance to enjoy the galleries, exhibits, street performances and awesome ambiance with the monthly Art Crawls. The common benefit of these events is their ability to draw people to our downtown core. That’s what’s fueled our city’s resurgence.

And the Bulldogs? They bring just over 4,000 people downtown for at least 34 nights a year. By any account, this is a significant asset that doesn’t feel like it gets the attention it deserves. The value of this asset gets even more eye opening when we take a deeper look into the impact that those 34 nights actually have.

After the 2009-2010 season, the Kelowna Rockets of the Western Hockey League had an economic impact study conducted by Kenneth Carlaw, an Associate Professor of Economics at UBC Okanagan. As reported by Wayne Moore of Castenet, the Rockets pumped in an all-in impact of about $31 million. Removing some of the more long-term line-items, such as former players who’ve returned to Kelowna, the number still settles in around $15 million.

A little closer to home, the Kingston Frontenacs offered a peek at an economic study done by the Kingston Economic Development Corporation in 2005 prior to the construction at the Rogers K-Rock Centre. While the numbers reflect the entire impact of the downtown waterfront arena, some reasonable extrapolation pegs the Frontenacs’ contribution in the neighbourhood of $11 million. And this is consistent with Meredith MacLeod’s story from March of 2015 in the Hamilton Spectator that quoted “somewhere between $7.5 and $10 million” would be drained from the economy if the AHL Bulldogs had bailed out of Hamilton.

The value of the Bulldogs certainly isn’t lost on the economic stewards of our city. Keanin Loomis of the Hamilton Chamber of Commerce is quick to point out the heightened activity game nights bring. “You don’t need to look at a schedule to know when the Bulldogs are playing,” says Loomis. “You see Jackson Square fill up during hours when foot-traffic would be winding down.” He also notes that a glance out the window reveals the number of people milling about prior to game time. And where there’s people, there’s money being spent.

Even if we remove the money spent on tickets, some loose, writer mathematics could draw an assumption that somewhere around $15 will be spent during a fan’s visit. Now, that’s factoring in the beer-tab for the rowdies razzing the visiting goalie as well as the kid who’s happy with a bag of popcorn. That would put fan spending at over $ 2 million per season – in theory, paying the salaries of around 60 people. And that figure is based on the 2015-16 attendance of 4,125 – which, while good enough for 7th in the OHL, seems well below Hamilton’s potential.

A quick trip for a tall frosty one at the Anchor Bar confirmed this for me. I had a brief chat with General Manager, Kadi Belghaba, who I found is a pretty big Bulldogs supporter; and for good reason. “On home nights there is always a big lift. It’s great for business. So, here, we see having the Bulldogs as a fantastic investment for downtown and the city of Hamilton.”

At least one hotel is also seeing the Bulldogs-boon. Syed Gardezi, the General Manager at the Sheraton Hamilton Hotel has noted the return to the OHL has resulted in a significant upswing in hockey-related stays. “Since Hamilton welcomed the Ontario Hockey League, it has quickly become apparent that fans, parents and families are more keen on travelling with the team; this provides us with more bookings than solely hosting AHL visiting teams,” explains Gardezi. “We have also noticed that some OHL teams are choosing to stay in Hamilton while playing in Niagara due to the close proximity and the amenities in downtown Hamilton.”

The Sheraton is a good example of how a business can get behind the home team and reap some rewards. They’ve enjoyed a successful partnership with the Bulldogs; offering special accommodation rates on game nights and value added benefits for visiting guests.

Gardezi also sees the broader potential of the team to bring the community together. “There is more hype surrounding the OHL players. They’re young and up-and-coming; this gives the Sheraton, the fans, the city, more opportunity to come together in Downtown Hamilton and cheer them on.”

To see the gold-standard of how junior hockey can put a charge into a city, we take a trip down the highway to London. The London Knights jam their beautiful, state-of-the-art Budweiser Gardens to its 9,000-seat capacity every night. And I mean every night – dating back to the 2004 season. London definitely shares some parallels with Hamilton. Both are larger cities by junior hockey standards and both have well-placed downtown arenas.

A discussion with the Ryan Starr, the Knight’s Director of Branding and Communications, highlighted the benefit the team has in downtown London. “We’re fortunate to have a great fanbase here. So there is definitely a distinctive feeling when the Knights are playing. The bars and restaurants in and around the neighbourhood of the arena get busy and you see the sidewalks fill with Knights jerseys making their way to the game.”

Also, similar to Hamilton, London has a robust student population that can be motivated by affordable entertainment and a fun nightlife. Starr notes how the student segment is represented at the games, which is typically part of their downtown experience. “We certainly see groups of Western students coming down to the games. Our proximity to the campus definitely helps this, as well as how  close we are to popular student night-spots where they often head to after the game.”

That’s an interesting insight that applies to Hamilton’s efforts to retain students after they graduate. It’s a safe assumption that the more engagement out-of-town McMaster and Mohawk students have with downtown, the more likely they are to live there.

Sure, comparing London’s love affair with junior hockey to Hamilton may be a bit unfair. But, it’s not a bad way to see what’s possible.

London’s relationship with the Knights hasn’t escaped the eye of Loomis either. “London has created a great model,” he says. “They’ve built their downtown arena and have created a welcoming district around it.” Having that mix of retail, bars and restaurants surrounding the arena, or any entertainment venue, helps ensure visitors, especially out-of-towners, have the opportunity to enjoy the local hospitality.

The OHL version of the Bulldogs also brings another intangible benefit – rebooting perceptions of downtown Hamilton. With regional rivalries like Kitchener, Niagara, Guelph, London, even Mississauga, we’re giving fans from nearby cities a chance to experience what downtown has to offer. This wasn’t the case while the team lived in the AHL – I’m not sure fans in Providence R.I. or Wilkes-Barre, PA made the trip all that often. Now we have the chance to welcome hungry, thirsty visitors with our expansive lineup of bars and restaurants.

Once they’ve filled a few restaurants, parking lots and a maybe a handful of hotel rooms, how’s the hockey, you ask? Well, I wouldn’t be alone in saying that the OHL might be the most entertaining brand of hockey you’ll find. Highly skilled with the raw emotion and intensity of youth ensures every game well worth the price of admission. Plus, we’re watching players who are a part of the community. They’re living with billet families here, or they are graduates of our own minor hockey system, they’re going to school here, making friends here – our community is making an impact on their growth and development, on and off the ice. Really, these players are truly representing Hamilton.

Just talking to retailers and seeing a few hats and jerseys walking around downtown makes you realize that we do have something valuable here. And, yes, in a bigger city like Hamilton, there are loads of entertainment options out there. But, the true value that the Bulldogs bring to our downtown is undeniable. And we haven’t even touched on the work the Bulldogs Foundation does with local kids in the community. This team is an important part of the city – it’s part of the fabric, the flavour and the identity of Hamilton. But it’s also a big part of a healthy, viable downtown. And I think that’s well worth supporting.