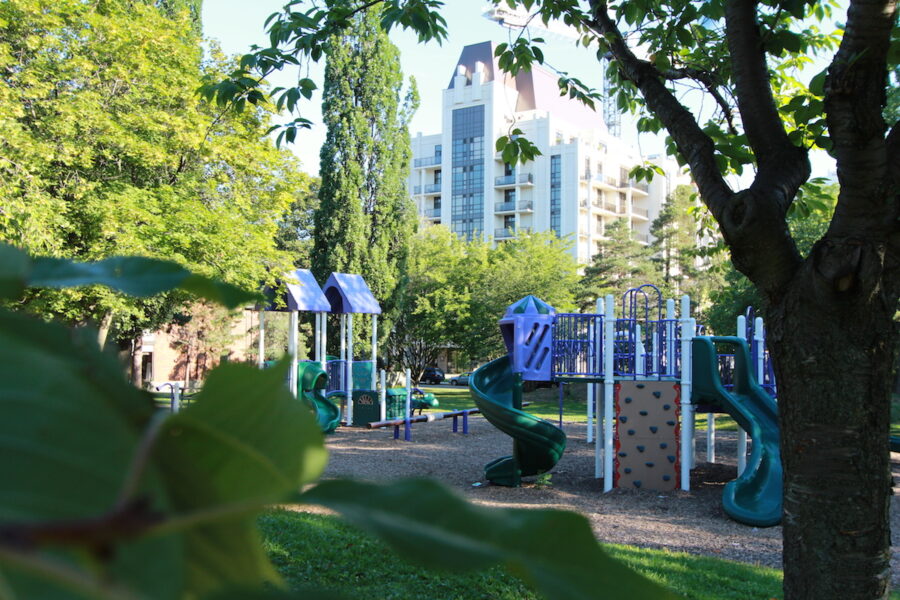 The Creation of Durand Park

September 1972 was a turning point for neighbourhood action and citizen participation in Hamilton.

A set of related happenings – including block busting, intimidation, the demolition of good housing stock and heritage buildings (sometimes overnight without proper permits), and the encroachment of inferior and uncontrolled development – led to the formation of the Durand Neighbourhood Association (DNA).

Durand is an inner-city district bounded by Main Street West, James Street South, the Escarpment and Queen Street South.  Today, it is home to approximately 12,000 Hamiltonians and is a leader in citizen-led development. In the 1970s, it was a hotbed of unrest.

In the spring of 1972, I met Herman Turkstra, a lawyer and a member of the Board of Control in the City of Hamilton. Herman had been receiving calls from citizens on Queen, Bold, Duke and Hunter streets concerned about block busting and intimidation by developers. These concerns soon led to a meeting with Robert Bailey, then the Director of Planning for the City of Hamilton. In attendance were Herman, two fellow “Duranders” and me. Herman raised the challenge: will you help? The formation of an incorporated neighbourhood association was the first step.

Mr. Bailey had received an award in 1966 from the Province of Ontario in recognition of his participative approaches to neighbourhood planning – a novel idea back then. In time, the City of Hamilton Planning Department adopted the use of neighbourhood planning committees comprised of residents, planners, politicians and other stakeholders.

Plans created by these committees, however, had no legal status. In the case of Durand, this meant it was essential to gain the official approval of the City’s Planning Department – not an easy task.

On the one hand, the residents of Durand wanted managed development that would include much-needed green space. On the other, the City’s Planning Board, made up of non-elected, citizen members, opposed placing development restrictions on the Durand Neighbourhood.

The answer on both counts was an overwhelming YES. The petition results were presented to City Council, yet they failed to trigger any action.

In October 1972, the first DNA General Meeting was held at Ryerson School. It attracted a standing room only gathering. By the time our neighbourhood planning committee was ready to reconvene, the DNA had become a well-organized, principled and united voice advocating for planned development.

In late 1972, City Council gave first reading to a proposed by-law requiring developers to submit site plans before demolition and/or construction could begin. This generated great opposition from the development sector.

At the same time, the City of Hamilton Planning Department under Victor Abram was reviewing zoning by-laws and exploring the creation of a park for Durand – a neighbourhood with a density higher than Toronto’s Regent Park yet with little to no green space.

One proposed location was the site bounded by Park, Charlton, Bay and Herkimer. However, since most of this property had been assembled and sold to Ronark Development Inc. for a possible 12-storey building, negotiation was necessary.

Alderman William McCulloch and I met on several occasions with company owner Ron Fraser. Mr. Fraser was always a gentleman at meetings. But immediate action was needed. So Alderman Vince Agro rose to the floor at a City Council meeting and requested a four-storey height limit on the proposed parkland. The motion passed and this changed the local development dynamics considerably.

Under the leadership of former Mayor Bob Morrow, Aldermen Agro and McCulloch, and Herman Turkstra, Ronark Development agreed in the summer of 1974 to sell to the City of Hamilton the land now known as Durand Park. The price was $580,000.

The opening of Durand Park was held in September 1975. MPP Dr. Stuart Smith, then leader of the Liberal Party of Ontario and member for Hamilton West, Alderman McCulloch, Herman Turkstra and many Duranders celebrated the occasion in style.

Since that time, the DNA has raised monies earmarked for playground equipment, a water fountain, and tree plantings throughout the park. City Council recently approved an upgrade of Durand Park and construction is scheduled for 2015. Most important, Durand Park continues to provide recreation for children and families, and a sense of community for all.

This article has been commissioned by urbanicity as part of an ongoing series devoted to the history and future of the heritage conservation movement in Hamilton. A special thanks to Richard Allen of The Renew Hamilton Project for his editorial support.