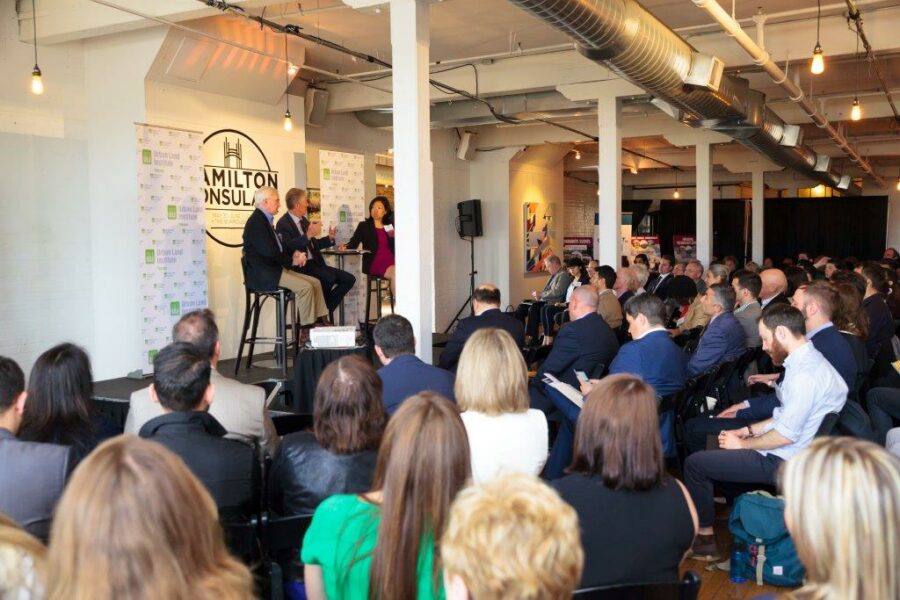 The Hamilton Consulate Shines In Toronto

It was bold, it was ambitious, and it was something quite unique.  For two days in late May/early June, the Hamilton Consulate was Hamilton’s time to shine in Toronto.

For the past several years, staff from the City’s Economic Development Office have been seeking investment in the Greater Toronto Area (GTA) in Hamilton’s economy, and to date, this has been quite successful.  New industrial investments like Canada Bread, Maple Leaf Foods and Navistar have added industrial space and hundreds of jobs to the local economy.

Downtown, the story is even more positive as GTA developers (along side so many Hamilton developers) are investing in adaptive reuse residential and commercial projects that have brought new retail and new residents to the downtown area, while preserving important buildings.

Although these investments are happening more frequently it is still a challenge to bring investors to the city. Finding an agreeable time and date to set up an investment tour can be quite a challenge. So, instead of labouring to find that perfect calendar moment to bring GTA investors to Hamilton, the Hamilton Economic Development Office brought Hamilton to the GTA in the form of the Hamilton Consulate.

The Hamilton Consulate was an intensive two day event held on May 31st to June 1st. This event targeted GTA investors to help generate a better understanding of the Hamilton economy on deeper level.  The consulate consisted of events such as; A real estate panel discussions, an investment “speed dating” event where GTA investors could meet Hamilton boosters, presentations on Hamilton’s growing film and tech scenes, a fashion show, and ended with the 2017 Supercrawl lineup announcement.  Over the course of the two days, attendees were treated to a number of great dishes by some of Hamilton’s top culinary talent.

In the lead up to the Consulate and during the event itself, there were over 40 media hits, generating over 23,000,000 impressions and an ad equivalency of at least $250,000. There were articles about Hamilton’s revived economy in the Globe and Mail and the Toronto Star, an interview on CBC’s Metro Morning, a mention on BNN and a score of conversations about a new Hamilton on social media.  In short, it was a big success from a media and free marketing perspective.

The most important point to note, is that the Consulate opened up many new avenues of investment leads. Over the course of the two days, there were many conversations and detailed questions from GTA investors, cards exchanged, calls set up, meetings and more tours.  Of course an investment takes time to put together, but the Consulate was instrumental in getting the ball rolling for many future investment plans.

Panelists helped in providing third party testimonials about the benefits of living in Hamilton and did an excellent job of stressing that Hamilton is NOT Toronto, does not want to be Toronto and expects any investors to understand our unique character before they start a project here. Along with these panelists, our ongoing investment partners were right there with us- partners like the Hamilton Chamber of Commerce, McMaster University, the Port of Hamilton and the John C. Munro Hamilton International Airport.

During the Consulate, some Hamiltonians looked upon these efforts as “gentrifying” Hamilton, and certainly staff is considerate of that perspective. The efforts in Toronto were not about getting people to move to the city (rising house prices hinder, not help our economic growth), but rather about new businesses and jobs.  It was about a concept that would create wide spread investment interest in the hopes of filling our industrial parks and downtown office/commercial spaces.  And most importantly, it was about a concept that aimed to move the economy forward, because that is what is expected of this office, from Council and taxpayers.

Will we stop marketing to the GTA?  In a word, no.  We still have spaces to fill, jobs to create and no matter your viewpoint, the GTA is inevitably coming to Hamilton to live, work and play. It is imperative to be prepared for new investments, ensure that there is an “open for business” attitude, and a commitment to making potential investments a reality. At the same time, these new investments will also complement what our local entrepreneurs are already doing. As GTA Investment grows in Hamilton, Hamilton itself will grow.
As so many people have said recently, this continues to be a great city, and our future is looking very good. Hamilton is home.