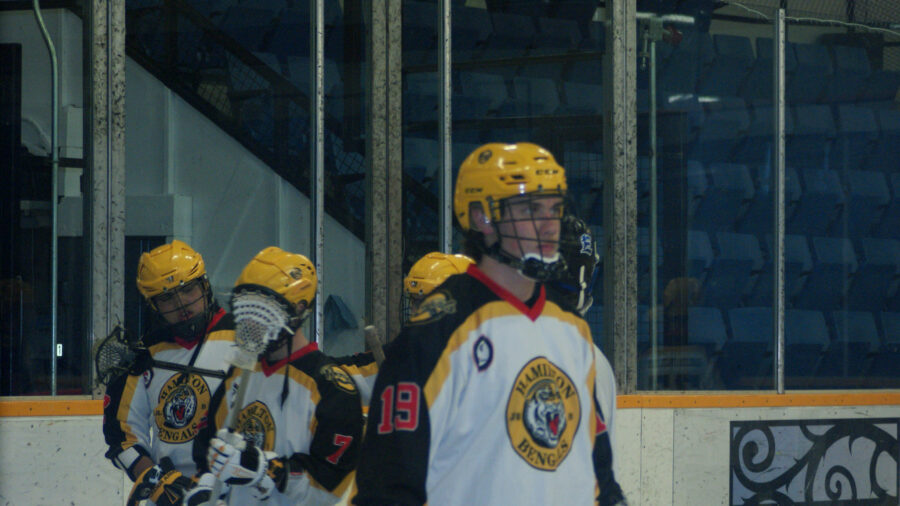 As we begin to emerge from the doldrums of winter, Hamilton’s seasonal sportscape is also in a state of transition. Media chatter about the prospective outlook for this season’s Tiger-Cats (and yes, with or without a certain headline-grabbing Quarterback) are becoming more prevalent. Our Bulldogs are one of the top major-junior hockey teams in the country and are, hopefully, headed for a long playoff drive. But, lurking in the shadows is another team that dons black and gold; representing our city in Canada’s original national sport of lacrosse, the Hamilton Bengals.

The Hamilton Bengals are a bit of a hidden gem in these parts. The indoor, or box, lacrosse club has operated at one junior level or another since 1965, settling into its Junior ‘B’ iteration for the past decade. In most parts of Ontario, the sport has always carried a passionate-yet-niche following. Of course, there are exceptions. In Peterborough, the Senior ‘A’ Lakers jam more than 3,000 into the Memorial Centre on home nights. Closer to home, the Six Nations territory is, essentially, the mecca of Lacrosse. Despite a local population of just over 12,000; Six Nations boasts teams in every amateur level conceivable. And, in almost every case, they’re the powerhouses of the league.

Thanks to some on-floor success and a trip to the second round of the playoffs last year, the Hamilton Bengals are seeing a resurgence. And that’s resulted in on and off-floor optimism as the club begins preparing for their Ontario Lacrosse Association season that kicks off in May. Prior to last year, the team hadn’t qualified for the playoffs since 2007. But, now we’re seeing a stronger group of players coming up through the Hamilton Lacrosse Association’s minor system; that’s resulting in some homegrown success for the Bengals. And, like in any sport, winning gets attention.

Developing hometown talent is certainly one of the priorities of the Hamilton Lacrosse Association. Now, with the help of successful alumni giving back to the program, grass roots development has been strengthened. One prominent HLA alumnus, Kiel Matisz, who is among the top scorers of the National Lacrosse League’s Georgia Swarm, is now running a Lacrosse-oriented phys-ed program in Hamilton schools, as well as skill development sessions within the HLA House League.

“I think there’s a big opportunity to really grow the sport of Lacrosse in Hamilton,” says Matisz. “Kids love the game. It keeps them moving, develops a combination of skills that improves their athleticism, and it’s economical.” This move also reflects heightened interest and efforts to include the cultural elements of Lacrosse into the educational curriculum. The Haudenosaunee roots of “The Creator’s Game”, has long been a bridge between First Nation and Canadian cultures. Using the sport as a means to enhance the education of our area’s history; an important factor to instill cultural understanding among our youth. And, introducing more of our kids to a highly athletic game offers obvious health benefits as well as transferable skills that can help their performance in other sports.

Multi-sport athlete, Joey Cupido, a former Hamilton Bengal, is a testament to lacrosse’s ability to develop well-rounded athleticism. Growing up in our minor lacrosse system, Cupido was a two-time All-Canadian for the McMaster Mauraders’ football team – bringing home the Vanier Cup in 2011. “The speed and agility of lacrosse gives you an advantage in just about every sport. Everything happens quickly, which definitely helped me on the football field.”

Cupido, now a defensive specialist for the NLL’s Colorado Mammoth and was named a first-team all-star in 2015, remembers his time with the Bengals fondly. “The Junior ‘B’ Bengals were founded when I was in high school and I’ll never forget my first game with them. I remember thinking that this is the coolest thing in the world – having the opportunity to represent my city in front of all my family and friends. I definitely wouldn’t be where I am today if it wasn’t for my time with the Bengals.”

Perhaps more than any sport, Lacrosse hooks fans quickly. Given its visual similarities to hockey and some tactical parallels to basketball, it has some familiarity by association. But the pace, athleticism and tough physical nature of the game leaves many first time viewers with dropped jaws.

The Hamilton Bengals are looking to capitalize on their on-floor improvements with additional efforts to move a few more people through the turnstiles at the Dave Andreychuk Mountain Arena. This season, they’ve partnered with downtown start-up and online ticket provider, Bruha.com. Given Bruha’s foothold on Hamilton-area events, the choice has plenty of upsides. “First, we want to make coming to a Bengals game as easy and convenient as possible,” explains Junior ‘B’ Bengals’ vice-president, Gary Gallant. “The service Bruha provides enables us to promote and sell tickets to our games better and helps us to introduce the game to people who may not be familiar with us; we’re definitely one of Hamilton’s best-kept secrets, but we’re planning to change that.” Gallant is hopeful that Bruha’s strong network in downtown Hamilton will help expose lacrosse to a broader demographic. “This vehicle will provide more people in our community with the opportunity to enjoy Canada’s summer, and first, national sport.”

The Bengals represent an interesting opportunity for Bruha as well. The company has predominantly been involved with arts, music, and cultural events. “Partnering with the Hamilton Bengals is really exciting for us and something that we’re looking forward to,” says Bruha co-founder, Kristian Borghesan. “Not only does it give us the opportunity to showcase our platform across the team sports category, but it’s an opportunity for us to help connect Hamilton with such an exciting sport and the organization behind it.”

Bengals’ ticket sales also offer the unique benefit of directly supporting the city’s minor lacrosse system. In 2015, the Hamilton Lacrosse Association purchased the Bengals from private ownership. HLA President, Greg Gillis, sees this as an appealing arrangement for both HLA players and the Hamilton community. “Ensuring a solid, stable junior franchise here in Hamilton gives our young players a hometown team they can aspire to play for. And for the community, it means coming out to watch the Bengals play, including the added benefit that you’re supporting the kids as well. It really is a win-win for everyone.”

Expanding the exposure of the Bengals is a crucial part of the sports development in Hamilton. Anecdotal evidence shows that participation, as a fan or player, is underrepresented in the lower city. Similar to hockey, the bulk of players are coming from the mountain and the suburbs. As more families are taking root in the urban areas, it’s important to make lacrosse a visible and a viable option for youth in those areas. Country-wide, it will also become imperative to engage new Canadians. Broadening the exposure of representative teams, such as the Hamilton Bengals, as well as the regions professional teams – the Toronto Rock and Buffalo Bandits – can provide the all-important introduction to the game.

In a perfect world, those introductions lead to a few more kids picking up a stick, signing up to play, and falling in love with the game of Lacrosse. Then, maybe those kids develop lasting friendships, life-long team-building skills, a healthy lifestyle and the confidence pushes them toward their goals. And maybe, just maybe, a few of those kids become Hamilton’s next Kiel Matisz or Joey Cupido.