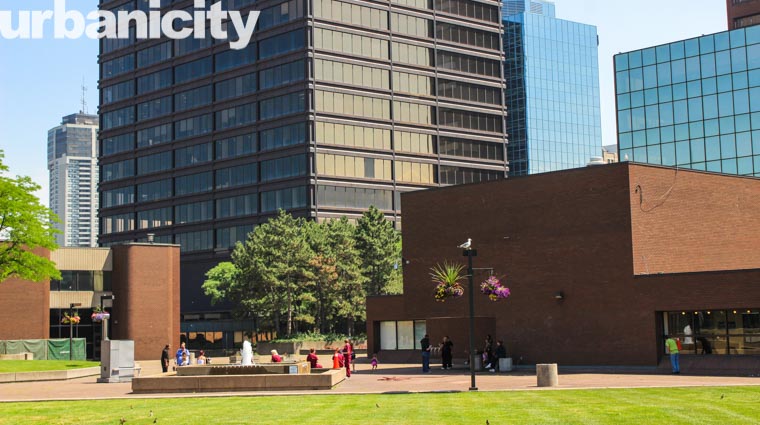 It can be accessed from all four of its surrounding streets: King, James, York and Bay. It sits at the foot of Stelco Tower, the Robert Thompson building, the Sheraton Hotel and the Standard Life building with convenient access from each. It has entrances to Jackson Square, the Hamilton Public Library Central Branch, and the Downtown City Centre. And yet, it is a dramatically under-utilized park space — more frequently used as a smoking area for the workers, students and patrons of those buildings than anything else.

Owned, operated and maintained by Jackson Square, the Jackson Square Rooftop is one of the largest and most central parks in the downtown core — right next to the “booming” James Street North neighbourhood. Why does it go comparatively untouched?

It could be because Gore Park, located kitty corner to Jackson Square’s rooftop, receives the attention of the Downtown Hamilton Business Improvement Area. It’s central location and regular BIA programming make it a naturally busy space. Jackson Square’s forgotten rooftop park does not fall into the jurisdiction of any BIA.

It could also be that it’s hidden behind tall buildings. It wouldn’t be crude to assume that many young Hamiltonians have never seen the park, or even know it’s there.

Of course, it could be the environment. The Jackson Square rooftop is not designated as a public park by the City and is maintained by Jackson Square, therefore it does not have to adhere to the 2012 Smoke-free Parks and Recreation Properties bylaw said Kevin McDonald, Manager with Hamilton Public Health Services. The area frequently is populated by smokers while taking their breaks, and the ground is littered with cigarette butts.

There’s no art; there are only a few picnic tables clustered off in one corner, and while there is some vegetation, there is only one grassy courtyard overlooking a performance pavilion. There are only a few thin trees, so one can only find shade when a building’s shadow falls over them.

But maybe things are starting to look up for this forlorn park space after all.

This summer, the park will be host to two festivals. From July 3rd to 6th the Latvian Song Festival is coming back to Hamilton and will operate a daily community showcase on the Jackson Square Rooftop. Also, for the first time, the Hamilton Beer Festival, running from August 22nd to 23rd, will be hosted on the Jackson Square Rooftop — an event that shows a lot of people pulling promise.

Also, the opening of McMaster’s new downtown offices and continuing education facility, set to be complete by the end of 2014, has excellent access to the park. Jocelyne Mainville, Leasing Manager for Jackson Square is hopeful that the addition of students and graduates to the park will increase its recognition.

Mainville is sure of the endless possibilities the Jackson Square Rooftop has – festivals, events, vendors, live music. However, she said right now, she’s more concerned about trying to increase the indoor occupancy of Jackson Square’s 1.4 million square feet of office and retail space.