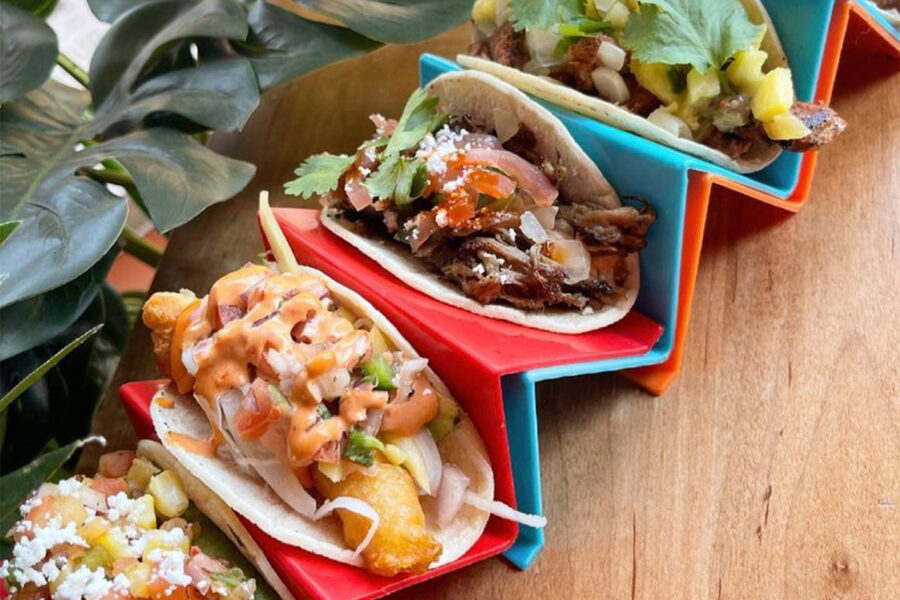 These are the best spots for tacos in Hamilton

Who doesn’t love a good taco now and then?

Hamilton sure does, and that’s more than evident when you look at how many terrific options the city has for the traditional Mexican dish.

Whether it’s a simple assemblage of ground beef and pico de gallo, or something more elaborate and inventive packed into that tortilla shell, the Hammer has plenty of variety when it comes to great tacos made by great people.

Wanna know who’s got the goods? Here are some of the best spots to get tacos here in Hamilton!

Nestled in the lower level of the Hamilton Farmers’ Market, Mexican Kitchen is one of the city’s most underrated spots for great tacos and other wholly authentic, passionately prepared Mexican street eats.

With almost all of the fresh ingredients made in-house daily, Mexican Kitchen’s takeaway tacos are loaded with flavour and topped with lettuce, pickled onion, cilantro, and a choice of protein along with a side of homemade salsa.

The menu also features burritos and quesadillas made with the same quality ingredients, further cementing Mexican Kitchen as one of the Hamilton Farmers’ Market’s best lunch spots.

Modern Mexican cuisine served in an attractive setting along James North, Mesa is the perfect spot for a sit-down experience with some seriously terrific, authentic dishes.

Alongside quesadillas, tamales, burritos and beyond, Mesa also makes a mean taco: loaded with protein choices like beef barbacoa, chorizo, or chicken, then garnished and served alongside Mexican rice, refried beans, and a light house salad. Delicious and nutritious with a healthy dose of awesome.

When it comes to enticing street food-style tacos, this Hamilton hidden gem is wildly underrated.

Known more as a grocery store and butcher shop specializing in meats and imported Latin food items, the family-owned La Bodeguita also sports a hot counter serving up fresh and authentic tacos that are made to order and super reasonably priced.

Double-layered corn tortillas are topped simply and deliciously with some cilantro, onion, and choice of meat, and served with a side of homemade salsa and a lime wedge for those who want to add a touch of bright acidity. These babies are straightforward and wholly satisfying.

The Mule may not have the most authentic tacos in Hamilton, but they certainly have some of the most delicious.

This atmospheric, laidback fixture of King William Street’s restaurant row is one of Hamilton’s most overall popular restaurants and nightlife spots that – outside of the pandemic – is regularly packed to the gills with locals sipping tequila and craft beer while noshing some playful, varied tacos.

This laidback Tex-Mex joint is a relatively newer addition to the Hess Village restaurant community, but it’s got a seriously stacked menu of unpretentious yet tasty burritos, nachos, quesadillas, and more. They even have an addictive take on the Taco Bell Crunchwrap Supreme that’ll knock your socks off.

But the tacos at Amigos are no slouch either: available in varieties like ground beef, fish, pork carnitas, brisket, chicken, and more, then loaded with traditional taco toppings and ready to be inhaled by Hamilton foodies and washed down with a cocktail or craft beer. Heavenly.

This Stoney Creek staple for fresh and delicious Mexican fast food is a local favourite that does things a little differently.

But what really sets this spot apart from many other taco spots in the city are their famous Birria Tacos, made with savoury and sumptuous Mexican beef or goat stew on tortillas that are garnished with traditional toppings and served with homemade consommé for dipping.

Maria’s Tortas Jalisco has hundreds of five star reviews on Google; and when you try their authentic and flavourful Mexican dishes, it’s not at all hard to see why.

What are your favourite spots for tacos in Hamilton? Let us know in the comments!