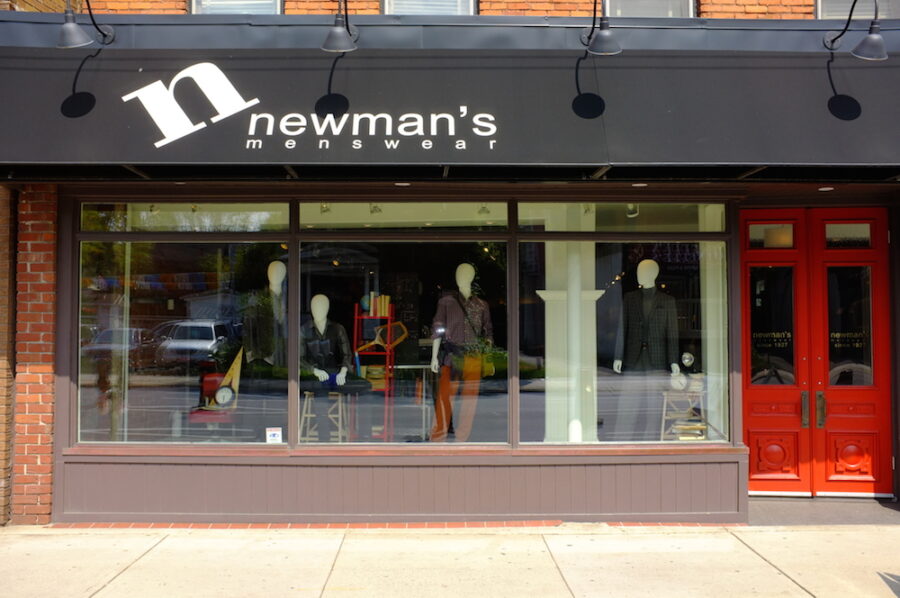 Three generations of progress: The story of Newman’s

Few small family businesses survive into the third generation. Newman’s, formerly Bill Newman’s Men’s Wear is one of those rare examples that not only survived, but is thriving under the management of the third generation of Newmans. Even more unusual is that the transition was done with cooperation between generations even though a dramatic change in direction was involved.

When I interviewed Aaron Newman for this story, Aaron kept returning to the theme of his father Bill’s passion for his business. Many years ago I had a conversation with Bill about his desire to have Aaron join him in his business. Yet Bill, with amazing restraint and great wisdom, allowed his son Aaron the freedom and support to work for several years as a professional golfer. He didn’t ask his son to help in the business even when his health was failing. Aaron says, “I never got the feeling I was being pressured to come into the business.”

From 2004 until 2007 when Bill’s heart started to fail, father and son shared responsibility for the venerable business. Aaron had rejoined the business for what, in his mind, was a temporary sojourn. Father and son shared a love of retailing – more because they shared a devotion to their customers rather than a shared vision of how the store should be merchandised.

The re-visioning of the store was aided by a new client, architect Drew Hauser, whose renovations of a neighbouring building for Fermata Music Therapy, a business run by Rachael Finnerty and Dr. Daniel Hyams, helped inspire the Newman family to use Drew’s skills in designing the new space in the original location.

Aaron had considered moving the business to areas where the retail environment is more supportive. Newman’s is the quintessential example of a destination store. More than 90% of the store’s customers drive there. After discussing the alternatives with Drew Hauser and taking into account the advantages of owning the real estate his business occupies, his decision was to stay put. He says, “I truly believe it was the best decision I’ve made!”

In the decade that has passed since Aaron joined the business, the store has evolved from a rather staid traditional ‘business clothing’ shop with casual clothing as a minor adjunct. Today, as you enter the shop, you are greeted by colour coordinated sports wear. Business casual and relaxed clothing including jeans, knit polo shirts and sweaters dominate. More traditional suits, blazers, and sport jackets fill the back half of the store.

As Aaron transitioned the shop to a younger, more fashion forward enterprise, he kept in mind the traditional clients that his father had built his business on.

As Aaron transitioned the shop to a younger, more fashion forward enterprise, he kept in mind the traditional clients that his father had built his business on. The change from Bill Newman’s shop to Newman’s felt more evolutionary than revolutionary despite the radical change in the store’s merchandising style. Today, while the merchandise mix can satisfy very forward fashion clients, more traditional clientele can also find suitable choices – particularly in business attire.

Merchandise in the front of the shop is assembled in a way that allows the client to immediately see the effect of the combinations, not by brand, but by colour and style. Particularly interesting to me as a former retailer is the sophisticated way that colours, brands, and families of sportswear are combined. The shop’s fixtures are a combination of antiques and distressed furniture, a tin ceiling and exposed brick walls make for a comfortable feeling, and give a traditional sense of value even to the priciest and newest looks.

The shop’s brands read like a Who’s Who of men’s wear. Hugo Boss, Zegna, Samuelsohn and more moderately priced Canadian and imported tailored clothing along with a selection of denim jeans from Levis to European brands approaching $300 a pair. Shirts by Canadian maker Lipson compete for space with American and German brand names.

Acknowledging that a lot of the enterprise’s clients are upwardly mobile younger men who aspire to the best, there is a selection of tailored clothing and sportswear that compliments the needs of less affluent customers. However, as the business evolves Aaron envisions a more “Carriage Trade” enterprise.

Aaron looks toward a more vibrant downtown. His area of King St. East has lost most of the retail stores that lined the thoroughfare when his grandfather opened the store in 1927. Bill Jr., Aaron’s dad, took over in the 1960’s when the stately homes and middle class residences that surrounded the shop provided enough clientele to support a retail environment. Over the past decade, what some call gentrification, or what Aaron prefers to call a return to what was, has seen housing prices rise as a new younger more fashion conscious population returned to the area. There is a new appreciation of the character and qualities of the housing stock. Folks who are cringing from the house prices to Hamilton’s eastern neighbours, Burlington through to Toronto, are amazed at what their real estate dollar buys them in Hamilton. Newman’s transition reflects what is happening in the urban centre of our city.

Like the Innovation Centre, the resurgence of the artist colony on James North, the revival of the North End and the constant improvement of Central Hamilton’s real estate values. Newman’s Men’s Wear is a component of the renaissance in Hamilton’s urban centre.

The promise of the development that follows Light Rail Transit (LRT) has convinced Aaron that the pain his business would suffer for the two years it will take to build the LRT infrastructure will be worth it. His progressive attitude reflects the view of many of his generation that are revitalising our downtown.