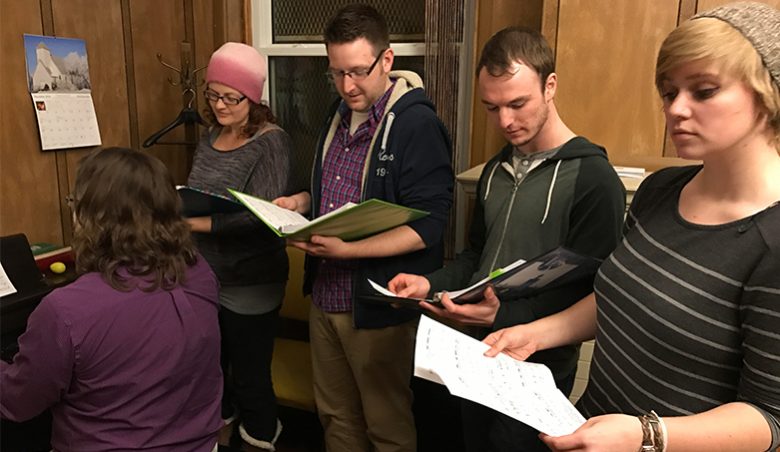 Hamilton’s most innovative community theatre company, Hammer Entertainment, is the brainchild of a familiar face: Hamilton’s own Jason Dick. Born and raised on the Hamilton Mountain, Dick first got involved in theatre as a teenager in high school productions at Westmount Secondary School. He admits, “In high school, I knew nothing at all about theatre. For auditions, I would sing songs from Les Mis and Joseph, because they were the only shows I knew.” He’s come a long way since then.

Dick soon branched out from high school productions to performing with local theatre companies, such as the Tivoli Theatre, Theatre Ancaster, and HTI. Like a musically-inclined sponge, he eagerly soaked up all the lessons he could from these companies, but he found himself wanting more, something new, that had never been done in Hamilton. So in 2007, with the help of a few of his performer friends, he created his own theatre company: Hammer Entertainment. Hammer’s mission statement is to bring new and innovative musical theatre pieces to Hamilton, providing opportunities to talented local actors, singers, musicians, and crew members.

Hammer has definitely succeeded in fulfilling its mission statement over the past 9 years. Dick and his team have brought numerous shows to Hamilton that had never before been seen in the area. Hammer introduced the hit RENT to the area in 2010, while later shows included premieres of the innovative shows Next to Normal and Grey Gardens. Dick has toured productions to Niagara Falls, and to the Sanderson Centre in Brantford. Hammer Entertainment celebrates its landmark 10th season next year. States Dick, “I like pushing the envelope. Theatre should be exciting, and make people think. It’s like a life force, always changing, reflecting society, and becoming something new. And I am so pleased to be a small part of creating that in Hamilton.”

Next on the docket for the intrepid artistic director is February’s [title of show], a Tony Award-nominated musical about “two guys writing a musical about two guys writing a musical”. An irreverent, tongue-in-cheek backstage romp, the show hilariously breaks down the fourth wall as it follows Hunter and Jeff and their friends on their journey through the gauntlet of creative self-expression. In the span of 90 minutes, they write and perform their show at the festival, off-Broadway, and finally Broadway, and learn lessons about themselves as people, friends and artists. Full of music theatre references that will appeal to the casual theatre-goer as well as to more dyed in the wool thespians, [title of show] takes a hard look at the pleasures and pitfalls of life as a performer, from living with – and slaying – doubts and insecurities about your art (“Die, Vampire, Die”) to the pure, child-like joy that comes from being part of a cast (“A Way Back to Then”).

[title of show] is a special production for Dick, not only because it’s another premiere for the area, but because the show’s themes parallel his own journey with Hammer so well. [title of show]’s characters are “nobodies in New York”, taking a chance on an unrecognizable production because they believe in it, and they know others will too, something that resonates with Dick. He says, “It’s tough to be the new theatre company in town, presenting something new and original. It’s a risk. But thanks to our supportive audiences, it’s a risk that’s worked out well for Hammer.” [title of show] is written with a minimal set, and no elaborate show-stopping numbers, relying solely on four chairs and a keyboard, an aesthetic with which Dick also identifies. While Hammer Entertainment doesn’t have the luxury of massive budgets or spectacular production values, for Dick, the story itself is the most important thing, and Hammer has always prided itself on creating a quality product that tells a story well.

Like the characters in [title of show], Dick couldn’t have gotten this far without his friends. Theatre is about the joy of collaboration, working together with your castmates and crew to create something magical. While sailing hasn’t always been smooth, and there have been rough spots in Hammer’s journey, Dick maintains that it’s his friends that have helped him – and his company – navigate those rough spots. “When you’re working with friends, of course you’re going to have creative disagreements,” he says, “But in the end you come together because you’ve created this family, these relationships, that will always be stronger than any of you would be on your own.”

Hammer Entertainment is a homegrown theatre company that, much like [title of show] itself, is for anyone who’s ever put his or her heart out there. If you’ve seen a Hammer production before, you’ll know why you shouldn’t miss their latest offering. And if you haven’t: well, now is the perfect time to become acquainted. As Dick says, “To quote a song in the show, we’d rather be nine people’s favourite thing than a hundred people’s ninth-favourite thing.” Judging from the thrilled audiences who keep coming back for more, it’s safe to say Hammer is a favourite thing for far more than nine people.

[title of show] ran from February 3rd – 11th 2017 at the Citadel Theatre, 28 Rebecca Street, Hamilton. For tickets for their upcoming shows, call the box office at 905-379-6520 or order online at Hammer Entertainment!