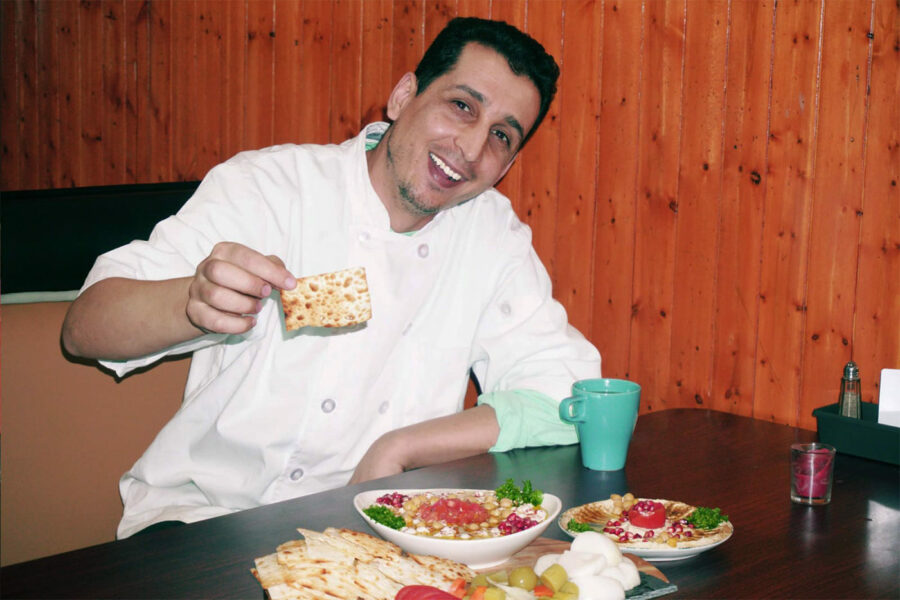 Tomah: The story of the Syrian family who established one of Hamilton’s tastiest restaurants

Even on a Zoom call, you can sense Mohamed Tomeh’s passion and ambition.

The founder of the exciting new Syrian restaurant and cheese shop Tomah on Queen Street South in Kirkendall has had a storied career that only recently brought him and his family to Hamilton in 2018.

Entrepreneur, husband, father, refugee, and visionary, Tomeh came to Canada with great hopes and ambitions that even in the midst of the COVID-19 pandemic still hold true.

“We have been open for delivery and takeout during this crisis,” said Tomeh, who is still learning to speak English and was assisted in the interview by his restaurant manager Charlotte. “It’s been good. My business has actually grown since this all began.”

Surviving during quarantine is a great achievement for any restaurateur, but for someone who had arrived in Canada as a refugee with only $850 in his pocket, it is even sweeter.

Operating from the same location as the former Big Ed’s, Tomah Restaurant serves up modern Syrian shawarma, salads, and plates with Tomeh’s signature twist: the inclusion of delectable Syrian cheeses such as akawi, halloumi, and the stringy, potent shalal. Rave reviews from residents on local Facebook groups combined with positive word of mouth and availability on local food delivery apps have helped keep Tomah Restaurant going through this crisis.

“I opened this restaurant because I want everyone to know about the different kinds of cheeses, jams, desserts, and foods that come from Syria,” says Tomeh, whose menu includes vegetarian, vegan, and gluten free options.

Tomeh had already made a name for himself back home as a successful restaurateur and cheesemaker, but had to leave it all behind when the ongoing civil war broke out in 2011.

“In Syria, I had a cheese factory and three restaurants,” says Tomeh. “The cheese factory was my first business, and after it started to grow, I thought about how I could sell more cheese on a bigger scale, and so I decided to open a restaurant and sell sandwiches. I opened the first restaurant in 2006 in al-Nashabiya.”

Tomeh’s idea was new for the Syrian food scene. Up until that point, Syrians had put cheese in their shawarmas, but they would use the same kind of generic cheddar that you would find at any international American burger chain. No one had thought to use Syrian cheese before, of which there are hundreds of varieties. Tomeh was the first.

“It was a new idea in Syria,” says Tomeh. “Cheese with shawarma, cheese with fries, fajitas, etc. I use halloumi cheese in my sandwiches, though I offer 200 different types of cheeses in my restaurant.”

After opening a second location in al-Nashabiya and a third in Adra, Tomeh was enjoying great success up until a civil war broke out in Syria. “I lost everything there,” he says. “My family and I moved to Alexandria, Egypt in May 2013.”

Once he was resettled in Egypt, it wasn’t long before Tomeh opened another restaurant. “We lived there for five years and then moved to Cairo.”

Despite this new venture in Egypt, Tomeh and his family continued to dream big, which included a vision of a life together in Canada. “I saw an opportunity to come to Canada. It was a safe place for my kids, first of all, and here I could find great success for my ideas.”

A post shared by Tomah: A Taste of Syria (@tomahrestauranthamilton)

While in Alexandria, Tomeh was offered the chance by an official in the United Nations to begin the proceedings to relocate to Canada. Shortly thereafter, Tomeh met with staff at the Canadian embassy in Egypt. “They asked me if I had a friend in Canada who could help me. One of my friends had moved to Hamilton years earlier.”

Tomeh had considered Saskatchewan and Montreal, but it was Hamilton that captured his imagination. “Hamilton, my friend told me, was busy, but not too busy like Toronto or Montreal. It was only cold for a few months and had nice warm summers. The neighbourhoods here were friendly and welcoming to newcomers, and had helped him when he’d arrived four years earlier. I then went and Googled everything about Hamilton, learned about its history and what it was like. I phoned back the embassy after that and said “I would like to come to Hamilton”. They replied, ‘See you in Canada’.”

Tomeh and his family arrived in Canada in September 2018 with only $850 US in his pocket. Housed by Wesley Urban Ministries for the first part of their stay, Tomeh started working right away to open a restaurant. With support from the Canadian government and the local community, he was able to open Tomah six months later.

Beyond the current pandemic crisis, Tomeh continues to dream, looking ahead to Tomah Cheese Factory. The size of Canada’s dairy industry means that the milk is cheap and plentiful enough for Tomeh to make his cheeses here at home, as it is expensive to import Syrian cheese from other purveyors in the Middle East. “You can buy them in the Arab supermarkets here for about $35 per unit,” says Tomeh, “but if I were to make those cheeses here, they would be much cheaper; closer to $5 or $6 for a unit.”

The Tomah Cheese Factory would further support local farmers by canning Canada-grown chickpeas right on site, as well as making them into hummus to be sold in ready-to-eat containers.

Though he has worked hard for his achievements, Tomeh is quick to give credit where it’s due. “Our success is not only my work. It’s everyone who works with me, including Charlotte (the restaurant manager), my wife, and my kids. We’re very grateful for our customers here in Hamilton. My success belongs to everyone who has been a part of Tomah.”

A post shared by Tomah: A Taste of Syria (@tomahrestauranthamilton)

If you’re new to Syrian cuisine and aren’t sure what to order from Tomah restaurant, Tomeh has some suggestions for your first order.

“I would recommend homemade kibbeh and cabbage rolls. My falafel is different from other regions; it’s lighter and crispier in texture. The halloumi sandwich or a shawarma with cheese are great options. I also make labneh yogurt, which is very healthy and good for breakfast or dinner. I add fennel seed and olive oil to make it extra delicious and nutritious. I cook with olive oil and make sure that everything we make is healthy and good.”

You can follow Tomah Restaurant on Facebook, as well as order from them for delivery and curbside pickup via Uber Eats.