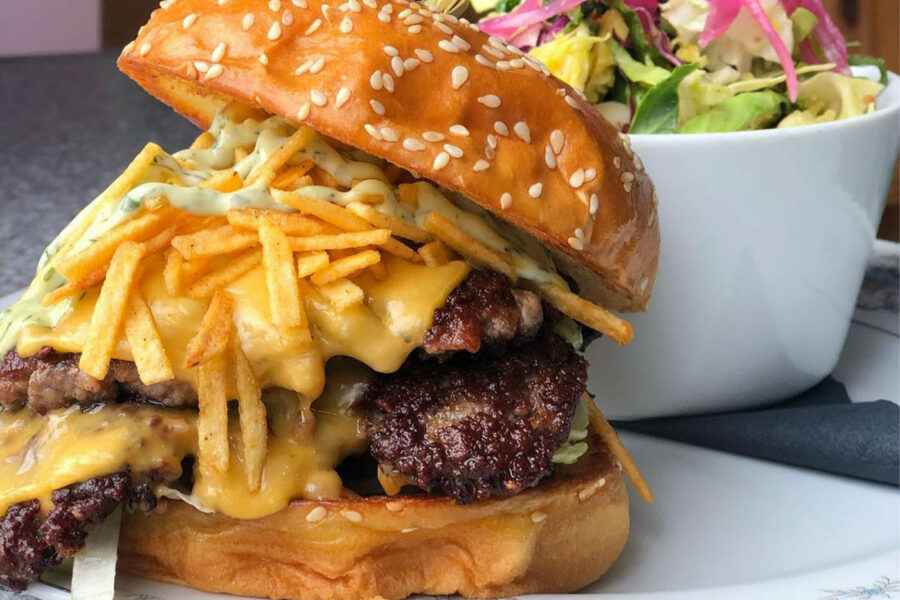 Hamilton is a total burger town.

From simple smash burgers to more elaborate offerings that push the limits of what can reasonably fit between buns, the city is packed with places that serve up this classic, versatile dish.

Though curating a list of our 10 favourite burger spots was far from an easy task, we think we’ve managed an assortment that covers good ground in terms of location, price point, and burger style. Without further ado, here’s our list of the top 10 burger spots in Hamilton! 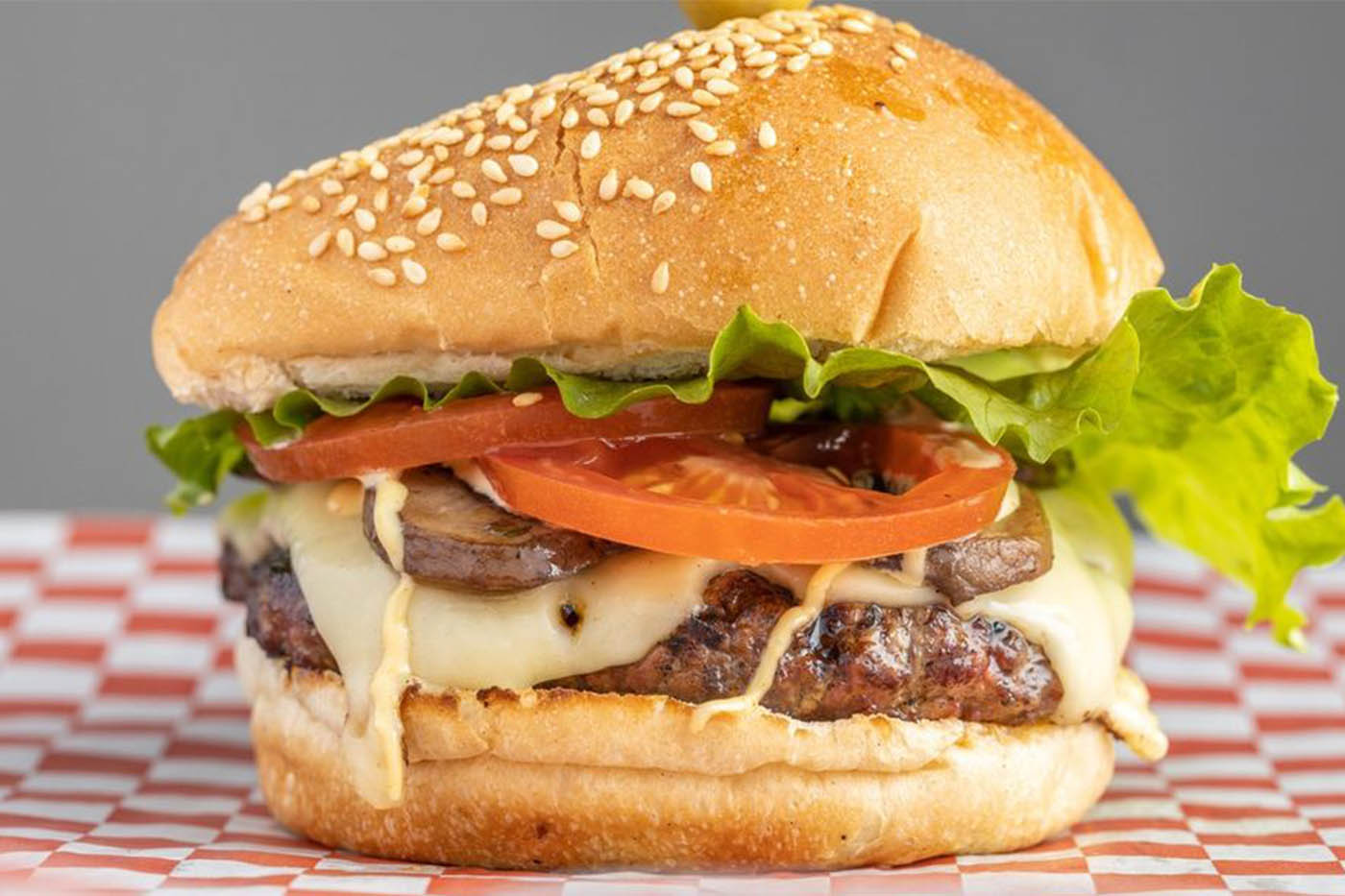 This newer spot on the Hamilton Mountain has already earned itself a following for its approachable menu of burgers, fries, and more done well.

Burgers at Mountain Burger are made from meat ground fresh in-house daily at their Upper Ottawa restaurant, and topped with staples like lettuce, tomato, and onions or with more unusual toppings line pineapple or balsamic glazed onions. Plant-based burger options, chicken sandwiches, Philly cheesesteaks, hotdogs, and salads round off a menu that should have something for pretty much anyone. 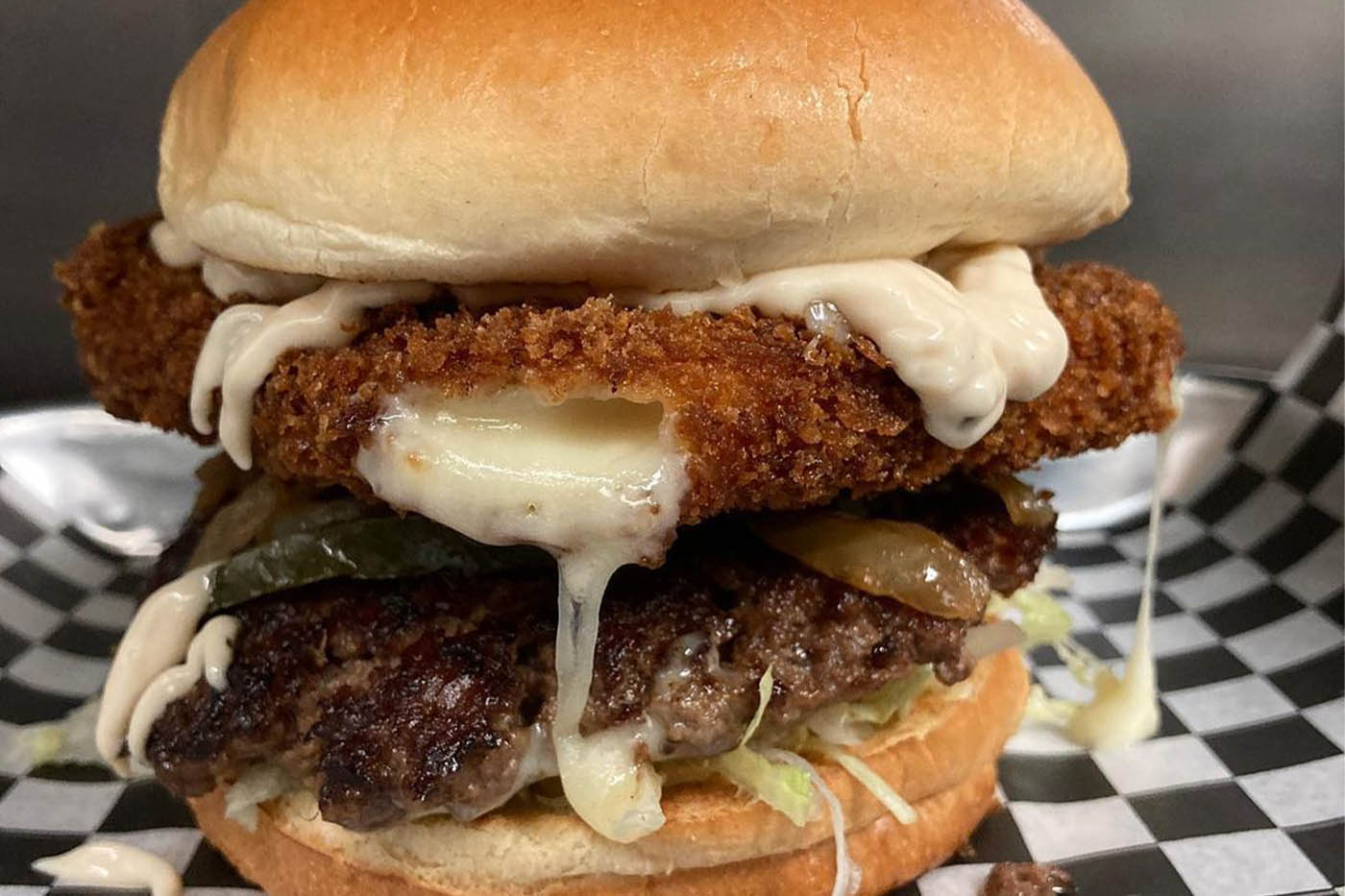 When it comes to pushing the boundaries of burger craft, Empire Burger on King Street West isn’t messing around.

Simpler menu items like their cheeseburger with lettuce, tomato, onions, and burger sauce are more than enough to satisfy; but Empire Burger gets extra wild with selections like The Great Wall, which is a triple-stacked monster of a burger – using two grilled cheese sandwiches as the buns, to boot – that you’ll have to unhinge your jaw like a snake to successfully bite into.

Excessive? Maybe. Delicious? Without a doubt. 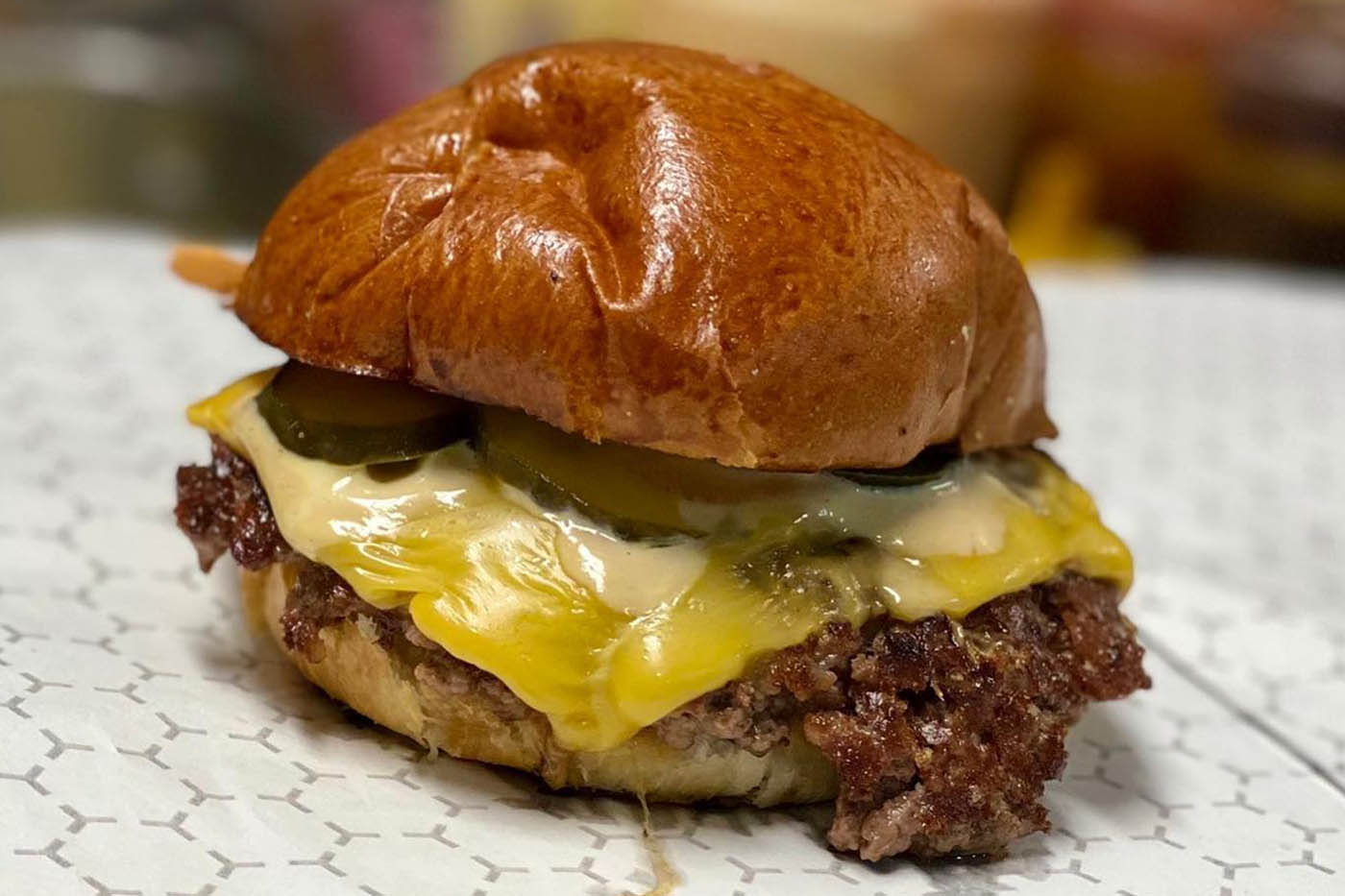 A restaurant that prides itself in handcrafted burgers that aren’t shy about experimenting here and there, Burger Lab has become a popular spot on Ottawa Street after arriving on the strip just two years ago.

An extension of the standalone Toronto restaurant of the same name, Burger Lab is headed by Chef Matt Yilmaz and specializes in burgers that run the gamut from simple-and-effective smash burgers to creations that get a little crazier, including specialty burgers topped with grilled pineapple and even chicken tenders.

House-made sauces, fries, and chicken sandwiches complete the picture at a burger spot that’s worth your attention. 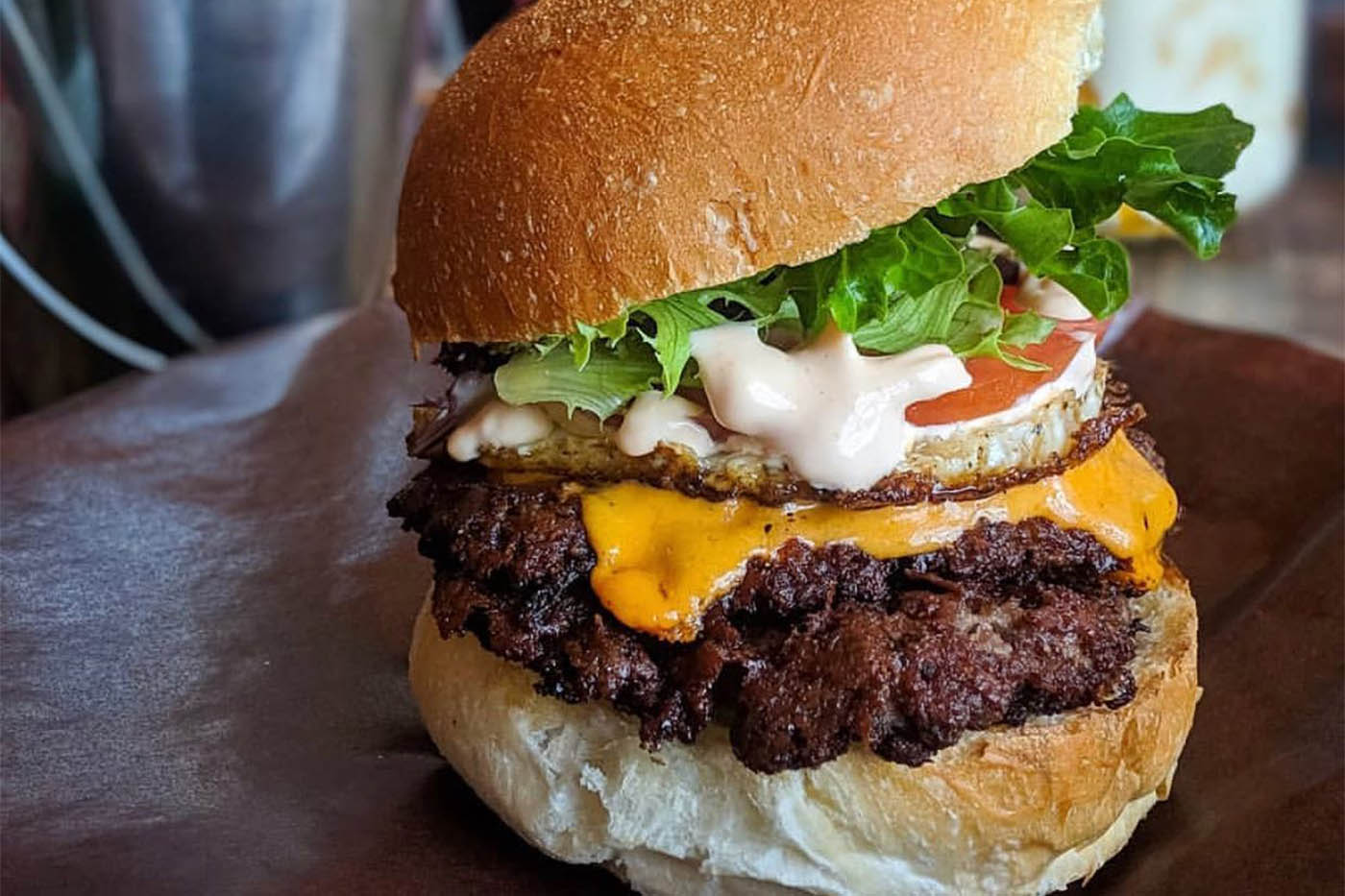 Devotees of the family-owned Real Burger say it’s well worth the drive to Waterdown, and who are we to disagree?

While some signature burger creations are on the menu with set toppings, Real Burger also allows visitors to fully customize their handheld with classic toppings like lettuce, tomato, pickles, banana peppers, mustard, and house-made burger sauce; or more premium ones like a fried eggs, bacon, guacamole, and a variety of cheeses. 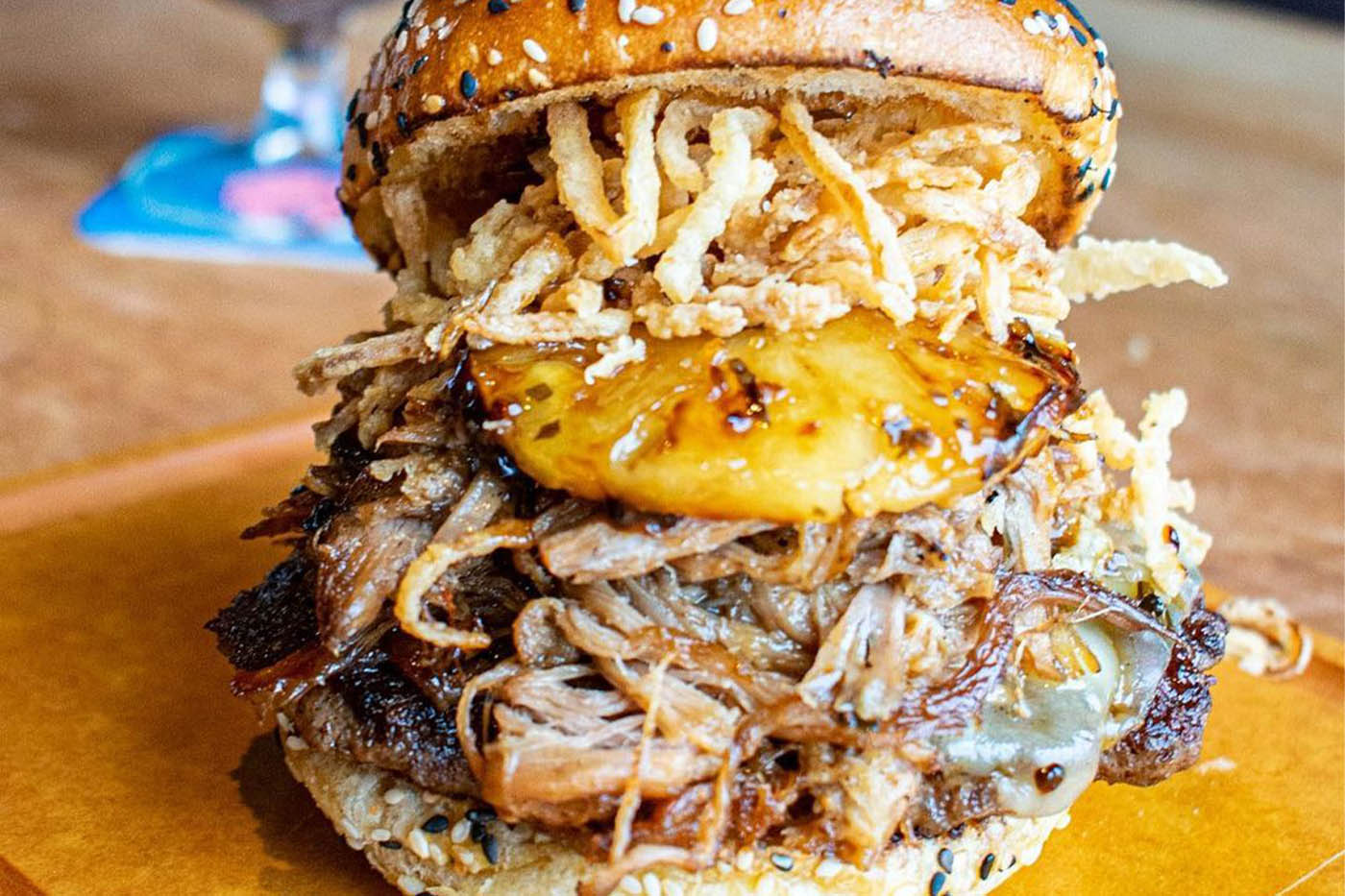 It’s impossible to make a list of Hamilton’s burger spots without making mention of HAMBRGR.

With two locations in the Hammer and one in St. Catharines, HAMBRGR has been a hot attraction for fresh, chef-driven burgers and other comfort dishes for years.

The burgers at HAMBRGR are certainly some of the city’s most creative, with popular choices including The Biggie Mac, which kicks the McDonalds Big Mac up by several notches; the Hawaiian Punch, topped with Polynesian pulled pork, caramelized pineapple, and Hawaiian barbecue sauce; and Le Royale with Cheese with shoestring potatoes, smoked bacon jam, and white truffle aioli. 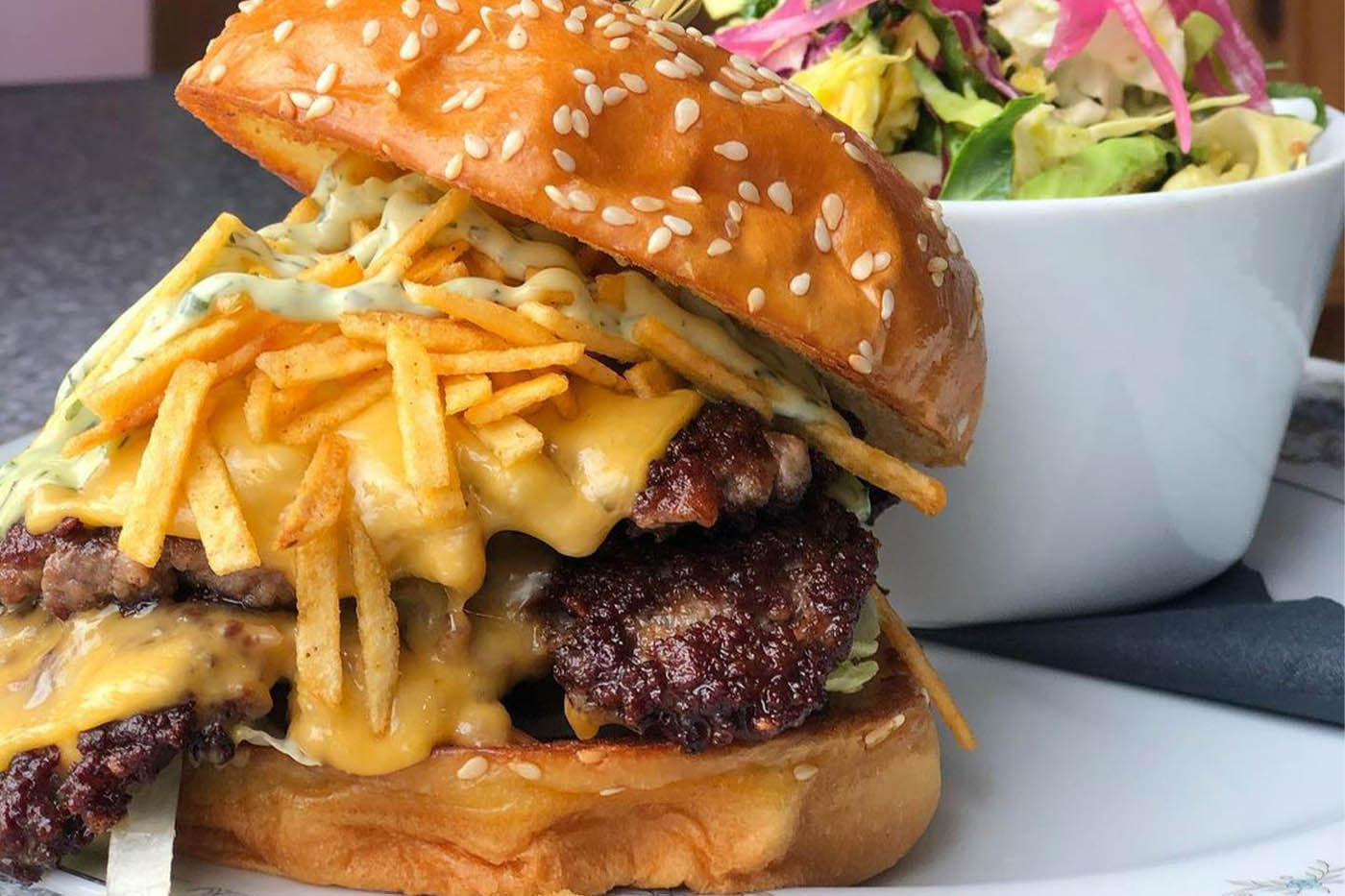 Marrying elevated diner grub with an immersive 80’s-inspired aesthetic, Electric Diner is a noteworthy fixture of Hess Village that will soon be opening a second, more central location within Lister Block.

Though also a popular place for breakfast bites and creative cocktails, Electric Diner also makes one heck of a burger. Numerous handhelds grace the menu here, but the standout for us is their signature Electric Burger: a double-patty delight topped with American cheese, lettuce, pickles, diced onions, hickory sticks, chipotle ketchup, and their house-made ‘Awesome Sauce’. It’s a total flavour bomb. 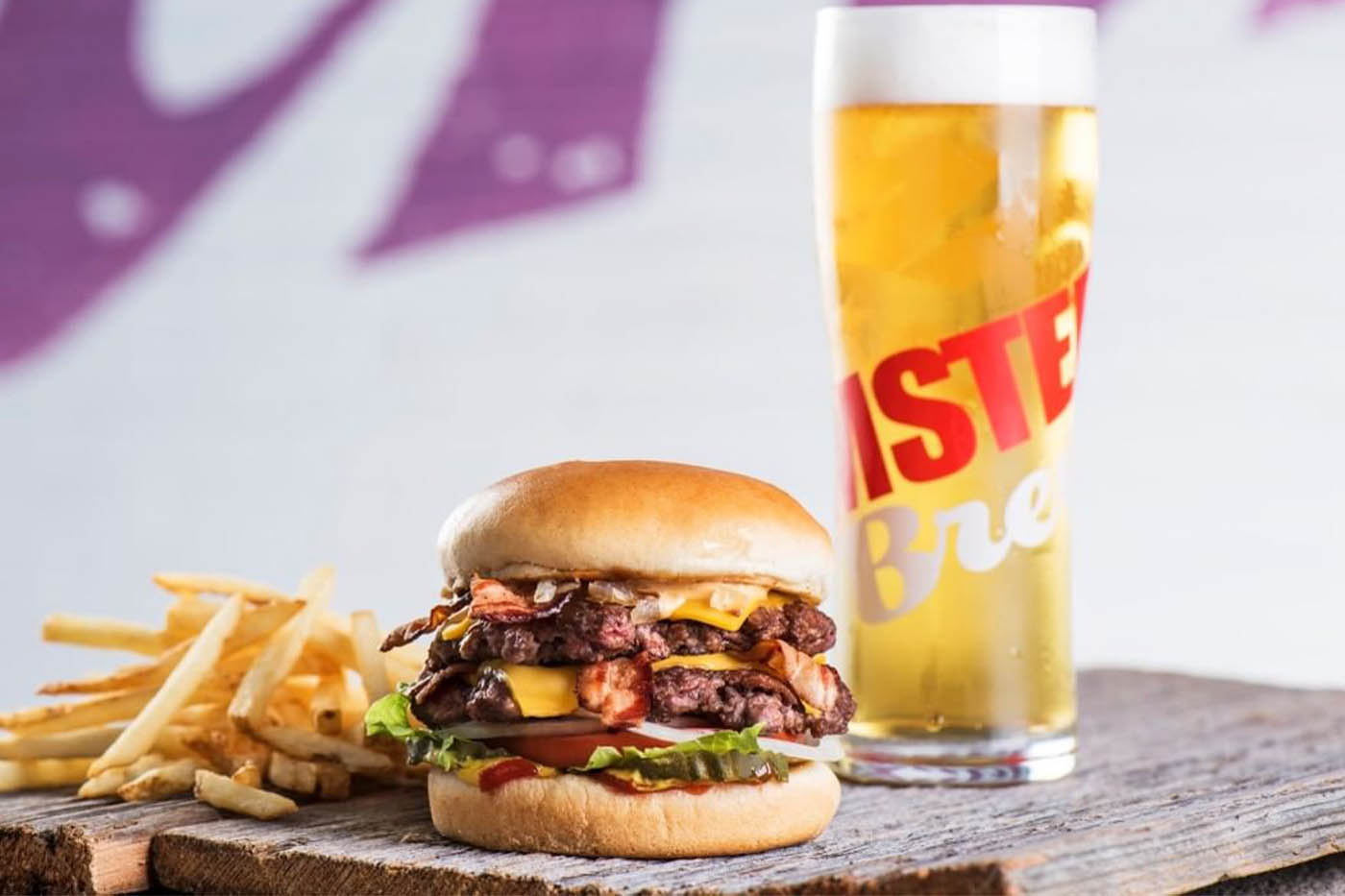 Located right across the street from McMaster University, Pink’s Burgers has been serving up super-tasty smash burgers and other fast food-style fare for more than half a decade.

Gyros, loaded fries, onion rings, and shakes are all on offer here; but the burgers are the true standout, made fresh to-order and fully customizable in terms of toppings. These burgers are full of flavour and so very satisfying.

Tip: make sure you get some of their homemade Pink Sauce on your burger. It’s got that enticing sweet tang that a great burger sauce is known for. 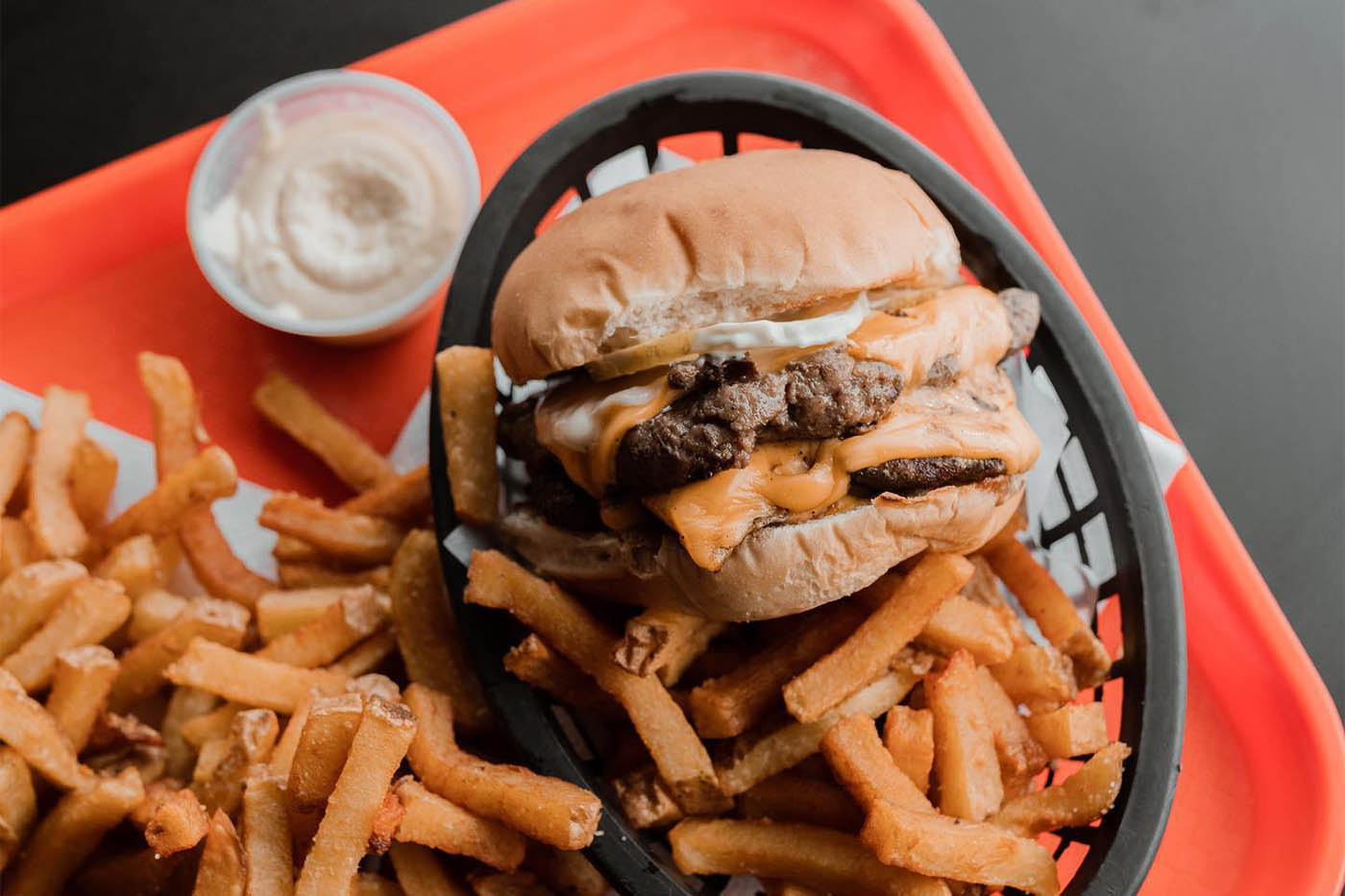 This mainstay soup shack with four bustling locations is an enduring lunchtime favourite in Hamilton, and they also happen to make a mean burger.

Not too huge, reasonably priced, and tasty as heck, the burgers at The Burnt Tongue include the classic burger, topped simply with mustard, ketchup, mayo, pickles, and onions; and the deluxe burger featuring lettuce, tomato, diced onion, and special sauce. These burgers are pretty straightforward, and a prime example of that fact that good ingredients are ultimately what matter most. 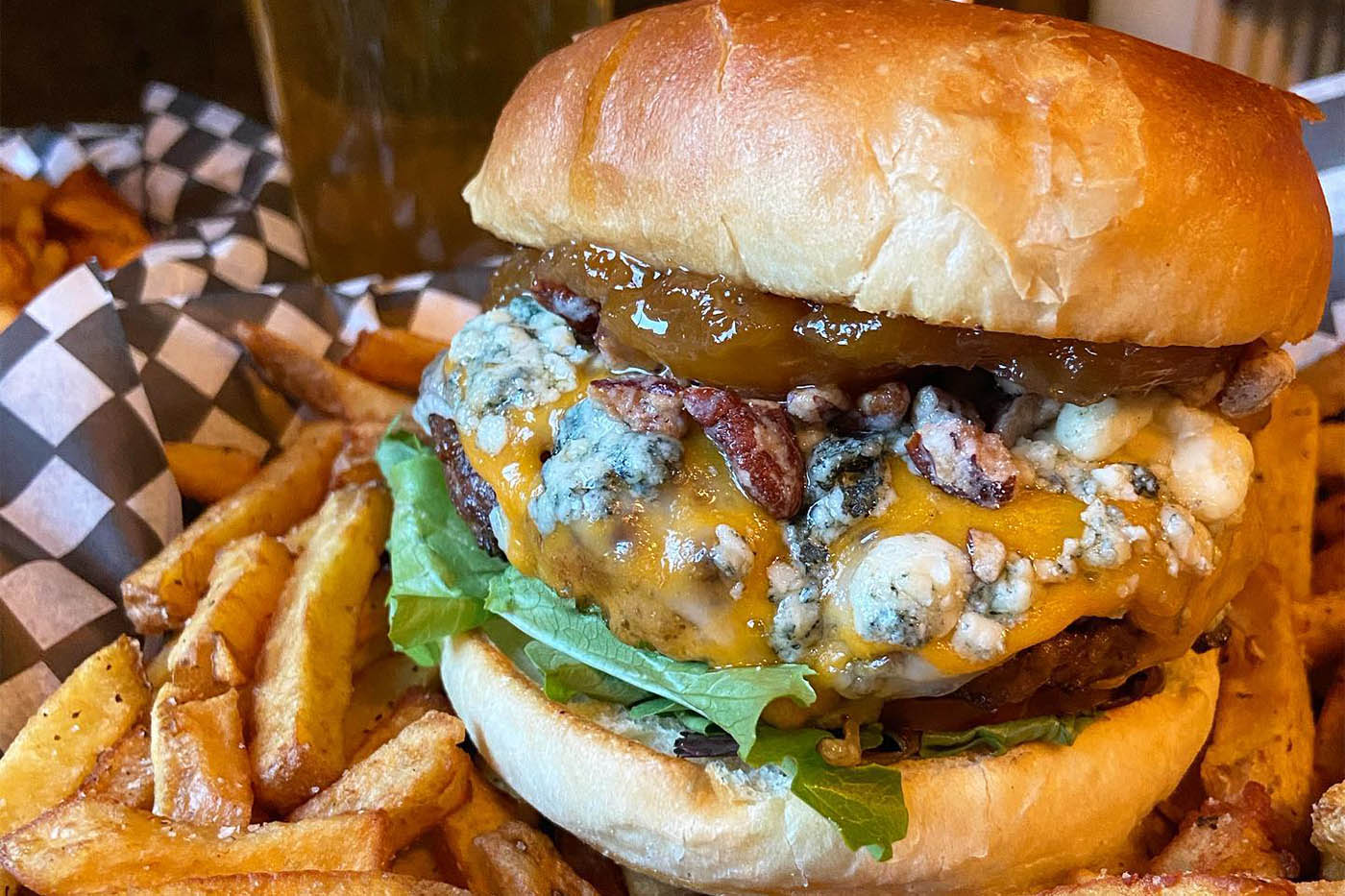 The Ship is one of the most popular spots on the Augusta nightlife strip, with a stacked list of craft beer on tap and numerous seafood dishes like fish & chips on the menu.

But this nautical-themed pub is arguably best known for its homemade burgers. The meat here is #thiccccc, the toppings are fresh and creative, the flavourful sauces are made in-house, and the portions are beyond generous.

Some of our favourites include the Northern Exposure, topped with cheddar, spiced pecans, and maple mayo; and a cheese lover’s dream called Sweet Cheezus, which is smothered in aged cheddar, gruyere, and blue cheese as well as some peach and caramelized onion jam. Drooling yet? 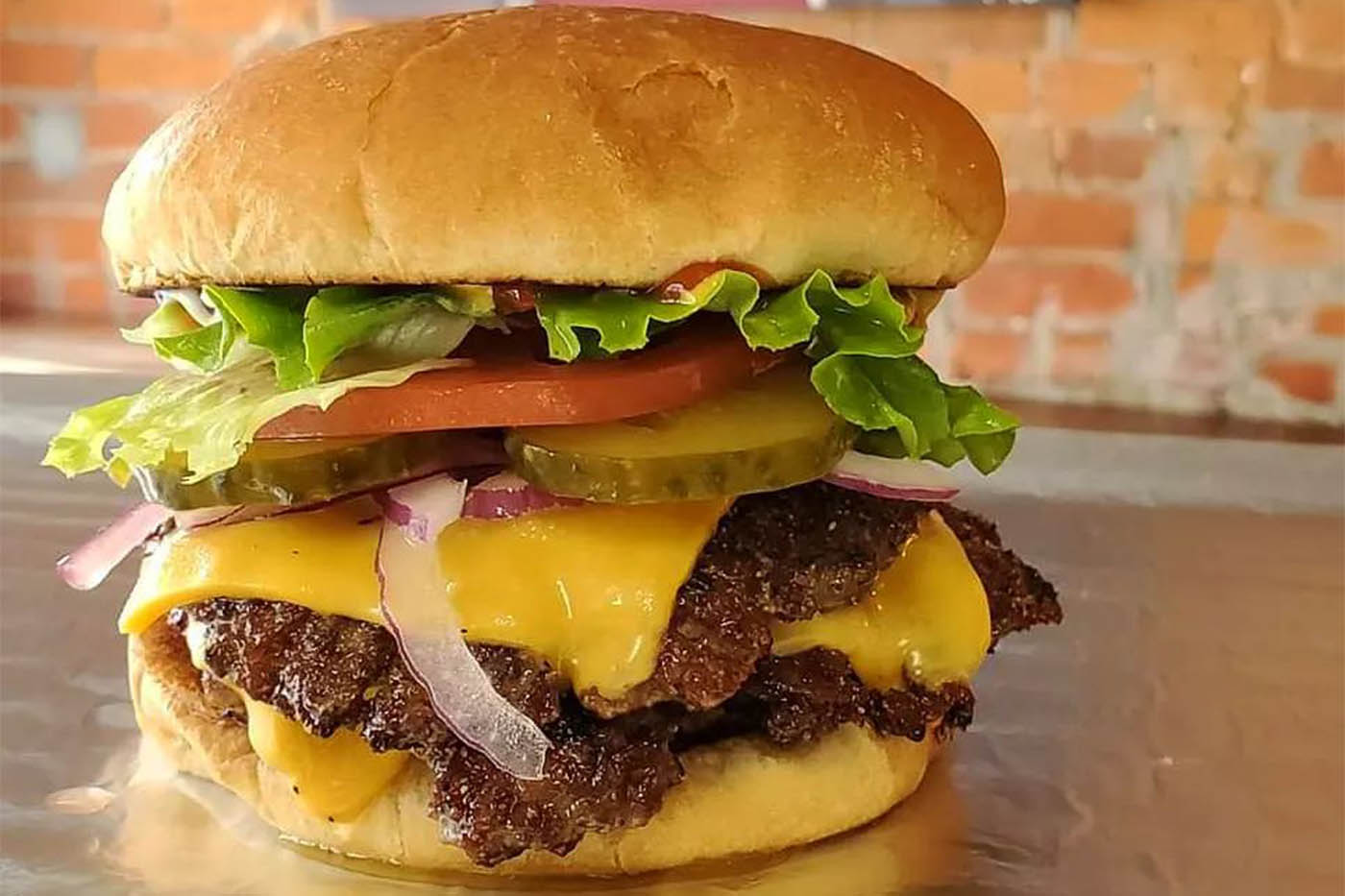 Neither fancy nor pretentious, Delirious Burger Co’s commitment to simple, delicious smash burgers is ultimately what makes them stand out.

With two Hamilton locations – one in Westdale, the other on Locke Street – Delirious has spent years serving up made-to-order burgers and fries to a devoted fanbase. The menu is as direct as they come; simply order a single or double and top it the way you want with all of the standards like lettuce, tomato, pickle, onion, cheese, mustard, or ketchup. Fresh cut fries and a vegetarian portobello burger option cap things off.

You won’t find elaborate burger creations, unique sauces, or any other special flourishes here; just excellent smash burgers – cooked and seasoned well – with nothing to hide.

Looking to explore more LOCAL burger spots? Then be sure to explore our search page!