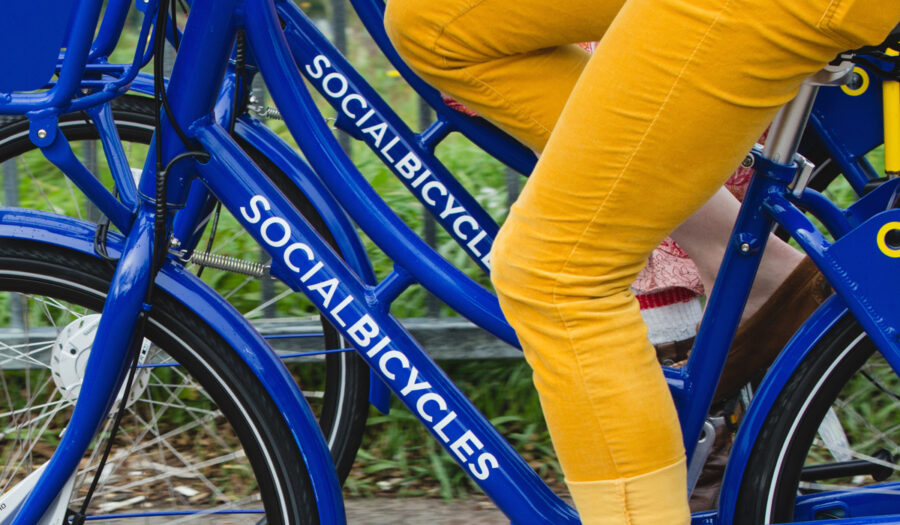 Waiting until spring? Sobi it.

The gleaming metal cages sprouted up throughout the city as quick as weeds. From downtown to atop the mountain, all the bike racks from Hamilton’s bike share system have been installed—112 in total. But, with no actual bikes in sight, the barren metal structures look like a misplaced prop from a James Cameron Sci-Fi.

The oddities have many Hamiltonians scratching their heads over the whole thing. For starters: What do these bikes look like? How much is this costing the city? Where and how can one rent these bikes in Hamilton? Before we go burning ourselves out with these questions, here’s a bit of information on the project, itself.

How much is this costing the city?

As a result, the city owns the capital—the bikes and the stations—and have contracted the non-profit company SoBi Hamilton Inc., which provides the bikes, hardware, and firmware technology. SoBi Hamilton, which is a subcontractor of Social Bicycles, is responsible for operating the system—though, they receive no additional funding from the city. The bike share program benefits from user fees and sponsorship dollars. Any extra revenue generated goes toward expansion and improvements of the system.

When do the tires hit the pavement?

Originally slated to be released this summer, SoBi’s plans blew a tire due to certification issues regarding the electronic components on their fleet of bikes. The process is further complicated, as the bikes need to be ordered from overseas. SoBi is now planning to distribute some of the bikes later this year. However, all 750 smart bikes will be rolling out in tandem with the first day of spring (March 20th) in time for the official launch. Once released, it will be the 10th largest bike share program in North America.

The bikes are a Dutch-style design with a convenient, step-over frame—the frame curves downward between the handlebars and the seat to make it easier to mount. It has a shaft drive—no chain—and three gears. The bike is also fitted with the typical accessories: a bell, front and rear mounted lights, an adjustable seat, drum brakes, and a basket.

The bikes make use of “4th generation smart-bike technology.” They feature a built-in computer, which is integrated with GPS connectivity as well as a screen and keyboard. The computer anonymously gathers information pertaining to the kilometres travelled and the routes cyclists take within the city. The obvious reason is that the company is keeping track of the bikes for pickup following usage, and though this is correct, the tracking also serves a far nobler purpose.
The company plans to use the accrued data to support decision making and implementation of further bike share initiatives—or wherever the data’s applicable.

The information can serve as a unique and invaluable resource for infrastructure specialists. As well, the information collected allows SoBi to move the docking stations according to demand, translating to fewer unused bikes.

Also, once a rider is done with their trip, they can also share their experience through social media, including a map of their journey, CO2 reduced, calories burned, miles traveled, and money saved compared to driving.

Those that purchase a membership prior to the initial launch will gain free access to the bikes until spring.