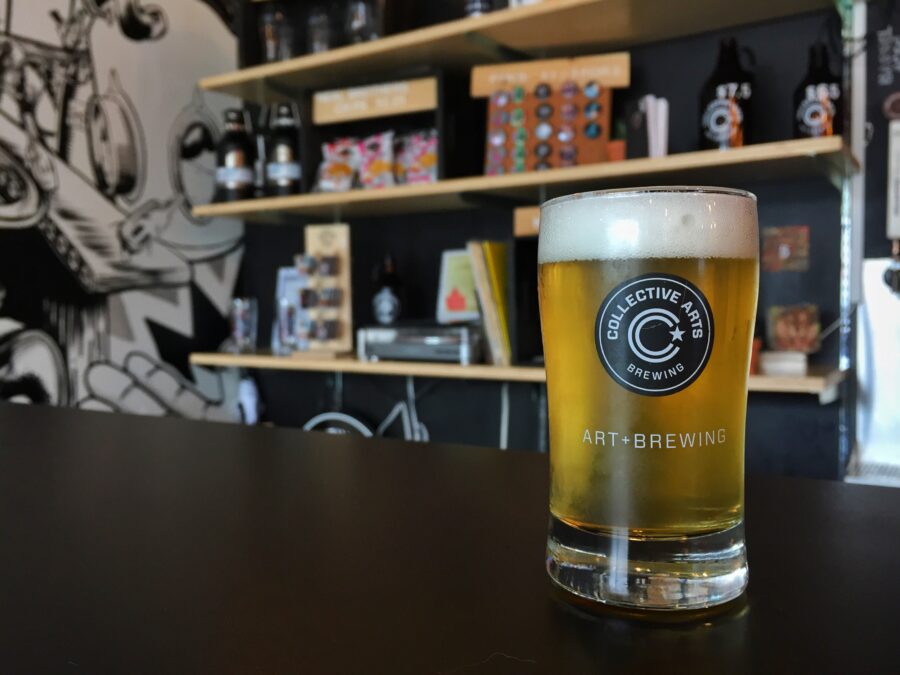 A Beer Sommelier’s guide to breweries in the city

Let’s take a moment to remember what the Hamilton food and drink scene was like only 5 short years ago. Half the restaurants we have now didn’t exist, and there wasn’t a single beer available in the city that allowed us to proudly say it was “Brewed in Hamilton”.

Oh how the times have changed! The restaurant scene is booming, thanks to an infusion of new ideas from brilliant chefs & restaurateurs, and just like restaurants Hamilton is now home to one of the fastest growing craft beer scenes in Ontario. The breweries we have produce beers across the spectrum of styles on par with anything in the country. From thirst quenching wheat beers to hoppy IPA’s, you can find them all in Hamilton.

The company that kickstarted this brewing renaissance was Collective Arts. Founded by Matt Johnson & Bob Russell in 2013 with the philosophy to merge craft beer and art. Collective Arts took over and rebuilt from the ground up the scorched earth that was left when Labatts abandoned the old Lakeport building on Burlington Street in 2010. Collective Arts brewmaster Ryan Morrow has a record of developing award winning beers and you can see it in the variety they produce. From tart kettle sours like the Prophets & Nomads Gose – a 4.5% ABV (Alcohol by Volume) sour wheat beer flavoured with Himalayan salt and coriander, to award winning IPA’s like Ransack the Universe which packs a juicy punch. Collective Arts also have an always evolving IPA Series – #4 coming soon, brewed to showcase a variety of hops and yeast strains.

Merit, custom built from the ground up, is the brainchild of friends Tej Sandhu and Aaron Spinney. Merit opened this spring and has already made their mark with a wonderful selection of rotating styles including a perfect afternoon treat S.V.P. – a French table beer that at only 3% ABV packs a lot of yeast driven flavour that is very approachable. If the success from their August Milkshake Day is any indication, you will continue to see experimental beers from these guys for a long time. Merit is also the only brewery in the city that has a standalone restaurant headed by Jesse Vallins, which turns out house made sausages inspired by flavours from around the world. When it comes to bringing wonderful food, conversation and beer together, Merit has succeeded.

This brings us to Fairweather Brewing which also opened this summer located in the west end of the city on 5 Ofield road. Founded by 3 guys who all have long histories in the industry; Dan Ryan a Chemical Engineer and home brewer, Brent Milcz, and Ram McAllister both graduates of the renowned Niagara College Brewmaster Program. With a focus on both American and Belgian styles and an always rotating bottle selection these guys have a winning formula. The standout for me has to be their High Grade IPA at 6.6% ABV, it offers amazing floral, pine, and herbal notes while not overpowering the palate. Although it may not be available at the time of this being published there Session Coffee stout brewed with ground Detour Coffee is also perfect on its own or with chocolate cheese cake.

Founded by Joe and Lindsey Mrav, Joe has taken his passion for home brewing to a new level and together along with brewmaster Alex Sporn they will be focusing on traditional styles with a twist, along with consumer education. Its one thing to enjoy a beer but to understand its history is somethings the Grain & Grit team are passionate to share. I’ve had a sneak peak of a few beers they plan on producing and their brown ale is one that many people are going to gravitate towards.