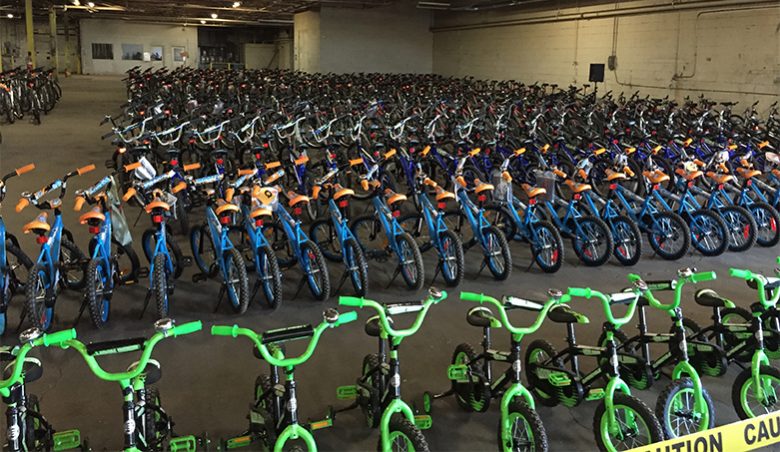 Michael received his first tricycle from his aunt on his first birthday. Although his legs were too short to reach the pedals, he learned early that simply hanging on while being pushed by anyone he could enlist was pure enjoyment.

As he grew, Mike graduated to larger self-propelled wheeled vehicles, starting with his ‘Big Wheels’, and then to subsequently larger ‘two-wheelers’ to match his growth. Growing up in Dundas, on a relatively protected court, meant safe learning with daily riding on the neighborhood streets or on wooded trails with his friends and family. Walking or riding to and from school was a natural outcome to this early training, whether it was one, two or three kilometers from his home.

Mike’s passion for cycling continued to grow after high school, culminating in many cycling trips throughout the world for months on end, including Western and Eastern Europe, Western Canada, New Zealand and Southeast Asia. Life for Mike consisted primarily of work, school and bike travel.

It was after riding in Hamilton for a summer as a bike courier, however, that Mike became starkly aware of the vast difference between the best cities to cycle in and the worst cities to cycle in. It was with this insight on his return from his last trip in China in January of 2010, that Mike outlined his goal to do whatever he could to make Hamilton a safer place to ride a bike.

Mike had an additional personal insight about cycling. Suffering from mental health challenges, Mike knew that riding his bike, or exercising in general, was one of the best ‘prescriptions’ he could have for his health; both mental and physical. Cycling was more than a method of transport or a way to see the world; it was also a way to be well.

With accessible mobility and better health in mind, Mike began to describe how he could help make Hamilton a better, safer place for cycling with a specific focus on youth. Unfortunately, Mike died in May of 2010, but not before he inspired many of us to join him in discovering ways to encourage more kids to ride a bike.

We initiated Bike for Mike with our first annual ride on the first Sunday of May 2011, and have repeated the ride on the first Sunday of May each year since then to both celebrate Mike’s passion for cycling and to support efforts that encourage more youth cyclists in Hamilton. With funds raised at the annual Mike Ride, and donations from many other generous donors throughout the year, such as our major partners JumpStart and Losani Homes, we have been able to help eliminate the barrier of affordability of a bike for many families in Hamilton. Since 2012, Bike for Mike has provided over 2400 new bikes to students and their families from six downtown Hamilton elementary schools, 1000 of which were provided in 2015/16.

A child with a bike is a ‘natural’ cyclist. The challenge of creating new cyclists, therefore, isn’t the child. Rather it is the creation of safe neighborhoods that parents will allow and encourage their children to ride in. The availability of some relatively safe streets that Mike could learn on in his early years in Dundas simply aren’t available for all children wishing to ride their bike in many other places in Hamilton, including much of the downtown core.

There are reasons to be optimistic for our children’s healthy cycling future. First, creating safe streets is not an issue of not knowing ‘what to do’. Other cities in the world can teach us good, effective and safe design for safe cycling and walking for all ages. Second, many organizations such as Hamilton Public Health, New Hope Community Bikes and both of Hamilton’s local school boards have spent many years laying the groundwork by providing tools and educational programs to support active transportation choices for our children. Third, we know that the investment in cycling infrastructure is one of the best investments we can make in public health – especially for our children’s physical and mental health, including improvements in their scholastic achievements. So, creating the infrastructure needed for children cyclists isn’t about the ‘what, how or why to do’; rather it is about ‘what we choose to do’.

At Bike for Mike, we choose our children’s health as a priority in all decisions we make in the design of our city. If more children will ride to and from school, or just for fun, due to safer roads including separated bike lanes and/or slower traffic, then we choose to invest in separated bike lanes and to drive slower. Our aspiration at Bike for Mike, along with our many community partners, is to do whatever we can to ensure 100% of kids who are physically able and close enough, will walk or cycle to school.

If you want to learn more about or become more directly involved with our youth cycling initiatives, join us at our first ping pong tournament, ‘Paddles for Saddles’, inspired and hosted by Forge and Foster on March 9th at Serve Ping Pong Bar & Lounge. And plan to join us for our 7th annual Mike Ride on Sunday, May 7th; this year starting and ending at Collective Arts Brewing on Burlington Street.

In the meantime, safe cycling.