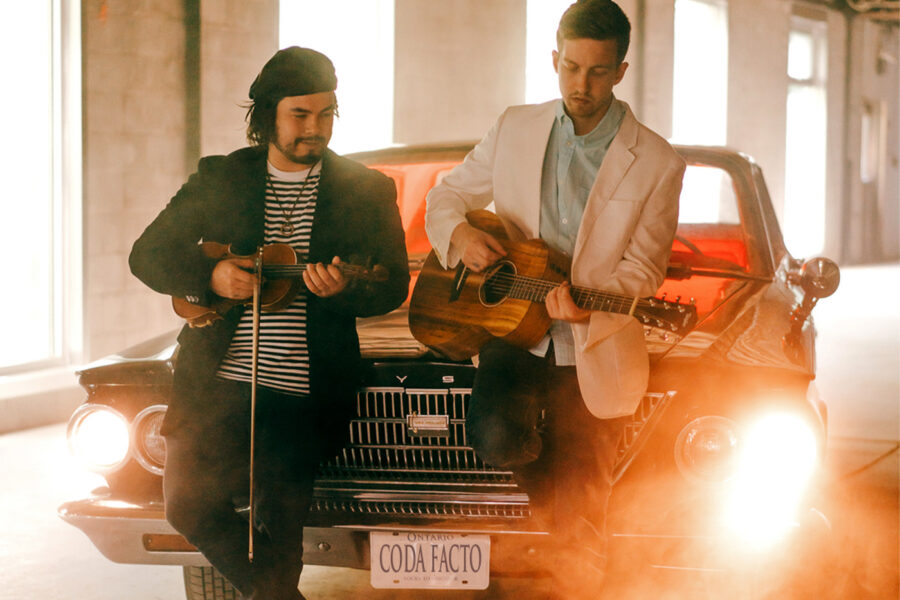 Indie rock duo CODA FACTO may be a newer band to the scene in Hamilton, but the two talents behind the music are anything but.

Founded by local artists Alexander DeRoo and Jonathan Harley in 2019, the pair had already been making music together for a full decade after meeting and clicking while they were both students at McMaster University in 2010.

DeRoo, born and raised in the Hammer, had met Harley, who was freshly arriving in Hamilton and has lived here ever since, on their very first day at McMaster. Both classically trained musicians, a shared love of music had them readily collaborating, with Harley using his skills as a violinist to fill out DeRoo’s original compositions. 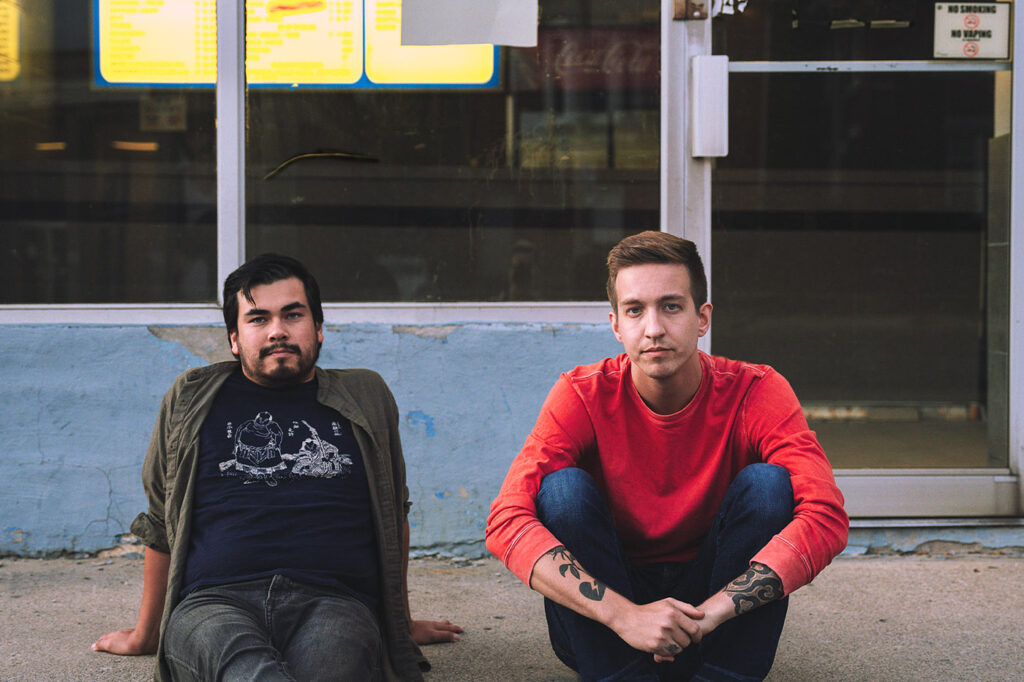 After spending a few years gigging together at local venues and open mic nights, DeRoo and Harley started to take the partnership even more seriously and teamed up with guitarist Adam Rogerson, bassist Mark Korczynski, and drummer Luke Ormond to form the band ALEXR.

The new group began working with the late Bobby Lanois and Glen Marshall of Steady Canoe and local music venue The Mule Spinner – and later with Carl Jennings at Westmoreland Recording Studio – rehearsing and recording some of their earlier tracks under the guidance and mentorship of these industry veterans.

The band underwent a reinvention under the name Strathcona when vocalist Kaitie Allinger joined in 2018, performing at the city’s most prominent music venues and releasing a handful of catchy singles during their time as a group.

However, Strathcona disbanded in early 2019 as members of the group moved on to other interests, leaving DeRoo and Harley to continue their collaboration under a new name, CODA FACTO.

“We named ourselves CODA FACTO, partly in reference to the ‘coda’ in music, which marks repetition with a different ending. This represents how we feel having performed with different names and lineups over the past 10 years,” the band says.  “Further, the Latin phrase ‘de facto,’ which represents the irony of the constancy of our musical partnership over the years regardless of how we labeled or acknowledged it at various times in our lives.”

Since then, the band’s focus has been on arranging and recording their debut EP, Jamesville, which just dropped on all streaming services on October 1st. According to the band, the new record acts as a representation of their work’s evolution over the past decade, with songs like Ode to Rose written just last year contrasted by older tracks like She, which was penned seven years ago.

As the EP’s title suggests, Jamesville is also a quintessentially Hamiltonian project, paying homage in numerous ways to the city the band calls home.

“Jamesville is a reference to Hamilton’s James Street North neighbourhood where Alex lived at the time of these recordings,” the band says. “In fact, the name is painted on the building where he lived and dedicated time for reflection and writing.”

That building also adorns the album cover of Jamesville; a building that, with its eye-catching pink façade, should be instantly recognizable to anyone who has spent time along James North. 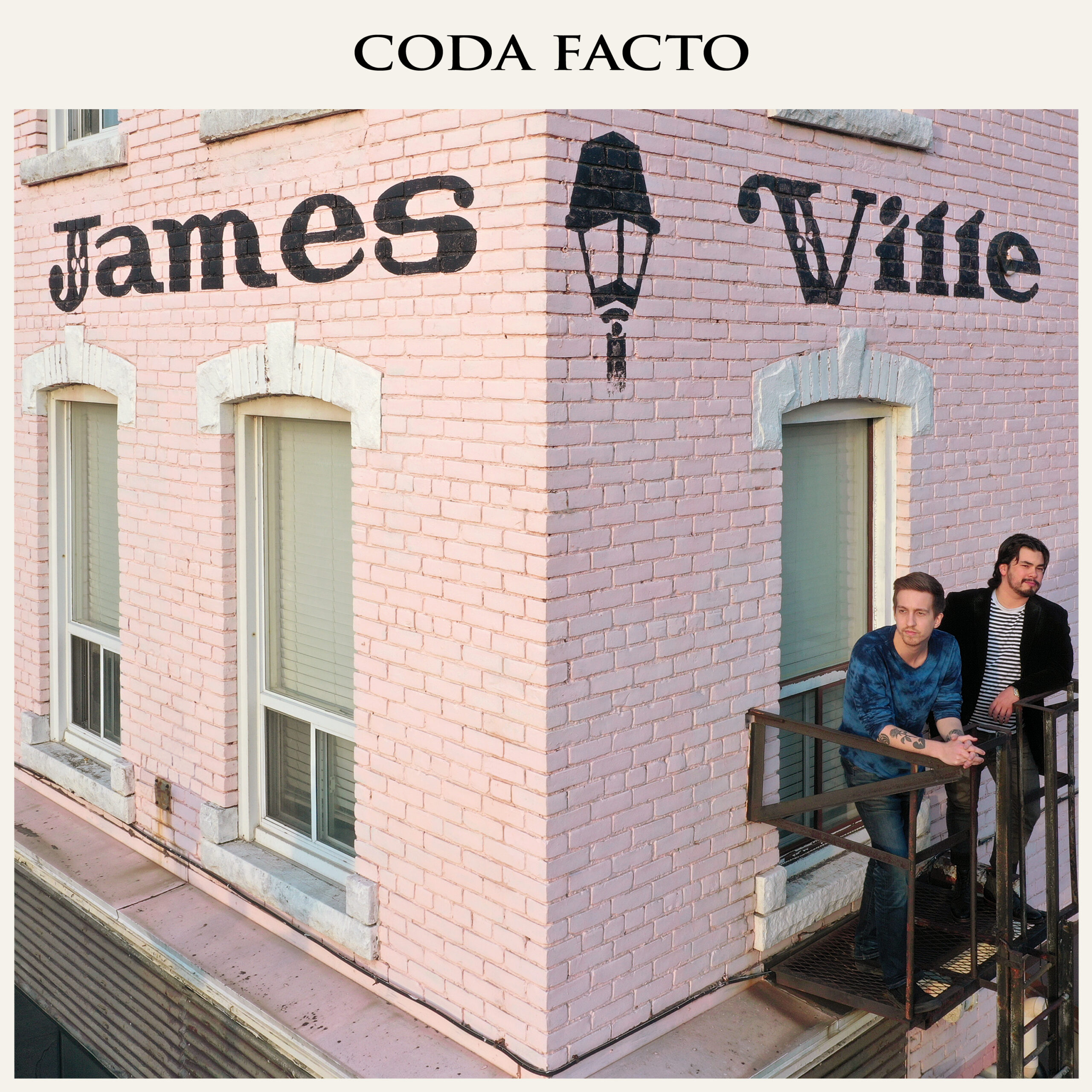 That’s not the only way Hamilton shows up as part of CODA FACTO’s debut release, either; the music video for the track Rock ‘N’ Roll Sounds was shot all over Hamilton, featuring numerous prominent shots of notable locales throughout the city.

Given DeRoo and Harley’s deep artistic connection to the city – through mentorship and writing and rehearsing and recording and everything in between –  it’s hardly surprising that their inaugural EP is such a clear homage to Hamilton.

“The Hamilton music community has been good to us, and we have grown here; starting with the open mics we played at to basically making The Mule Spinner at The Cotton Factory our second home where we evolved our musicianship for several years,” they say.

Though the pandemic put a major damper on live music for the past year and a half, CODA FACTO is finally getting ready to hit the stage, playing venues in Hamilton and nearby cities. The duo also shows no signs of slowing on the songwriting front, with plans to continue recording music with Carl Jennings and drop more EPs, or even a full-length record, in the near future.

Until that happens, Jamesville readily provides a wholly satisfying and musically dynamic introduction to CODA FACTO as a Hamilton band that – even with a decade’s worth of music to their names – is just getting started.

Follow CODA FACTO on Instagram to stay updated on the band, and listen to their debut EP Jamesville on all streaming platforms.