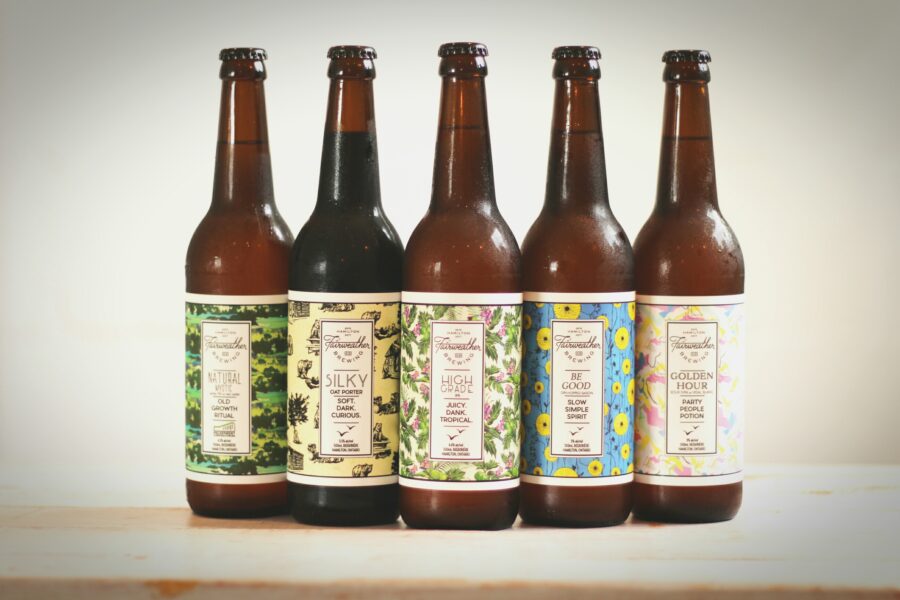 Find a little hops, your favourite citrus, or the perfect aromatic flavour right in the city

It’s no surprise that warmer weather means more time on patios with cold, refreshing brews. But if this summer you want to try something new, look no further than West Hamilton’s own Fairweather and Grain&Grit Brewing Companies. Both opened in 2017 and have quickly become staples in the local (and beyond) craft beer community. Better yet, both breweries are just seconds away from each other, encouraging microbrew exploration in Hamilton.

Owned by husband and wife entrepreneurs Joe and Lindsey, Grain&Grit is the product of over a decade worth of dreaming and home brewing, until they finally decided to make their infatuation with craft beer an everyday reality and share it with the city. After hiring brewmaster Alex, a Dundas-transplant and winemaker and brewer from Germany, the company really began to get off the ground.

Since opening in September of last year, Lindsey and Joe have truly learned the value of community. Placing the company in the Ainslie Wood neighbourhood was no mistake, and they’ve found their friends and neighbours have been vital to the positive growth of the company. “Our community has already given us so much, and we are working hard every day to give back to them,” says Lindsey.

Grain&Grit tries to source their ingredients locally as much as possible, depending on the season and the recipe, including local distributors for malts and some hops (VQH Farms in Eden, Ontario). As for choosing flavours, Lindsey says they often choose based on what they like to drink and what their customers like (“which we’re still learning,” Lindsey says). While they play with different fruits, spices, and flavours, they always “strive for balance in the flavours that we’re using.”

This summer, Grain&Grit is participating in a fundraising initiative with Max, a local 7-year-old boy with Duchenne Muscular Dystrophy, a rare genetic disorder that doesn’t allow his muscles to develop. His family has raised money for the disease in the past with local “Max’s Ice Cream Ride” and “Max’s Big Climb”, and approached Grain&Grit to create “Max’s Big Beer.” Influenced by Max’s favourite flavours of peach and vanilla, 50 cents from every can sold of the Milkshake IPA will go to Canadian charity Jesse’s Journey, in support of Duchenne research.

The beer is in conjunction with Max’s Big Ride on June 11th, where his father will begin his ride on a cargo bike from Dundas to Ottawa.

Enjoy it: Hamilton-made Sensational Samosas (served on-site in the taproom) with Grain&Grit’s In the Palms. Pairs deliciously with the spicy vegan samosas.

Not many people would expect to find a craft brewery just five minutes from McMaster University and next to a Fortinos grocery. But that turned out to be just the type of neighbourhood owner Ram McAllister was looking for. McAllister says, “[Hamilton] represents a level of opportunity that is unmatched in our cities. The city is buzzing with growth and creativity; it’s really wonderful to be a part of!”

McAllister’s brewing experience goes back to 2009 when he began in the industry in Victoria, B.C. After a formal education at Niagara College, he took the plunge and began the work of opening Fairweather in 2015. “This brewery is a product of everything coming together at a particular time,” explains McAllister. Even though being an entrepreneur wasn’t the main goal, he’s happily taken on that role to pursue something he truly loves, saying that “being an entrepreneur is just a side effect of being really obsessed with something that you can theoretically make money from.” Knowing the many hours it takes to begin and run any successful business, being passionate about your product is incredibly necessary.

When choosing flavours to produce, McAllister says that while certain materials can be difficult to obtain, “for the most part, we are only limited by our own schedule and a small staff.” Fairweather brews a variety of uncommon flavours along with classic ones – McAllister explains “There are wonderful beers that can be made across the board, but not everything needs to be an act of rebellion; some things have always been great.” Quality ingredients are a priority for Fairweather. Sourcing from all over the world, the brewing company looks to both Germany and Belgium, but also locally, with many ingredients coming from the Niagara region.

McAllister’s advice for entrepreneurs? “I’ve learned that if you are happy with what you are doing, you can push the rest of it off your mind. Everyone has an opinion; most are super positive, but it swings both ways. If you believe everyone that tells you you’re great, that’s a good way to stay mediocre.”

Find it: Fairweather’s taproom is open daily 12-9pm, or at several local restaurants and bars including Born and Raised, The Ship, Moody’s, The French, HAMBRGR, The Brain, The Mule, and more.