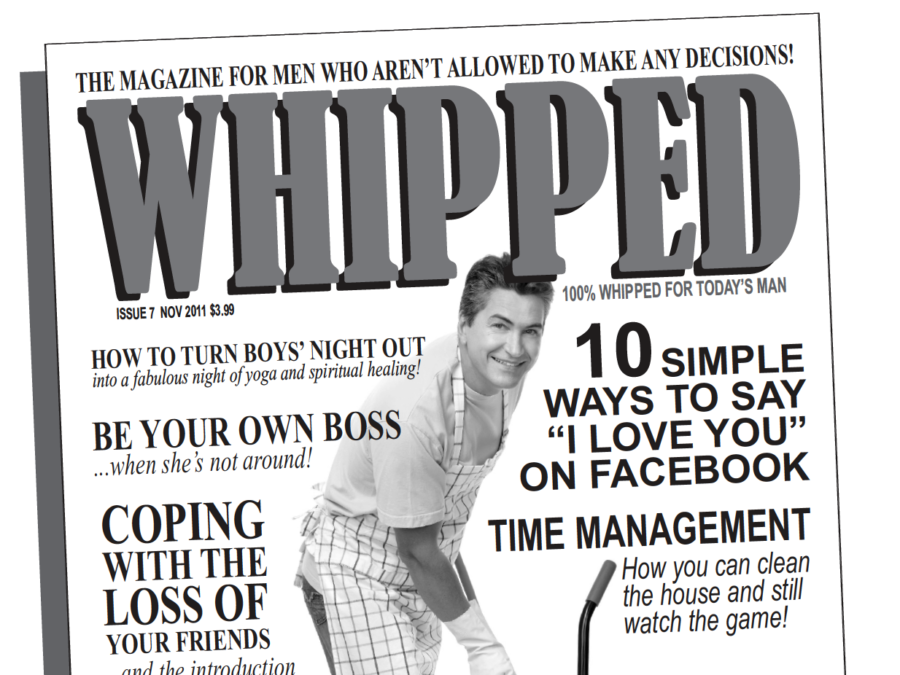 Men today have been emasculated, metro-sexualized and basically neutered by their female counterparts. While the likes of Helen Reddy may boom feminist anthems such as “I Am Woman” (Hear Me Roar), women are essentially acting like lion tamers when it comes to their mates.

Men are so whipped, in fact, that when a Vancouver restaurant posted a sign telling male customers they weren’t allowed to pee standing up, it barely made waves.

The allure of the “sensitive” man has always been baffling. Obviously, if your girlfriend or wife breaks an arm or a leg, it’s a given that you need to show some compassion. Or at least feign concern.

But if you’re the type of guy who sobs when you get a speeding ticket or loses sleep over the fact that your Facebook “friends” didn’t acknowledge your birthday, then you’re not sensitive, you’re a wuss.

And if Fridays used to be Boys’ Night Out and suddenly you’re taking yoga or pottery classes with the girlfriend instead, you’re not just whipped…you’re walloped.

This trend has been so rampant in recent years, that even Cosmo is getting in on the action with such enlightening offerings including, “6 Times You Should Be More of a Bitch” and “Should You Give Him An Ultimatum?”

I’m no Freud or Dr. Phil, but I have yet to meet a guy who is attracted to bitchy women. Some guys may prefer assertive, feisty women – but not bitchy.

As for ultimatums, they always smack of drama and desperation. If a woman thinks a guy should pop the question after a year or two of dating, say so. But don’t tell the poor sap that he better propose by such and such a date or it’s over. Just move on. After all, do you really want a proposal that’s been offered under duress? How romantic.

Chatelaine offers such gems as: “What To Do If You Can’t Stand Your Man’s Best Friend” and “Does Your Relationship Need More Conflict?”

Fortunately, men can take heed. If you’re dating a girl who has these magazines strewn about her coffee table, run. If her idea of appointment television is Jersey Shore or Housewives of Orange County, run. If you feel as though she’s trying to change or “fix” you, it’s time to fold and get new cards.

Give and take is a normal part of any relationship. But there’s a big difference between bending and bending over.

For instance, it’s not unusual for husbands to help out with the housework these days. Whether it’s washing dishes or picking up after the kids, it’s not unreasonable for men to pitch in. After all, more and more women are working outside of the home and it isn’t fair to expect ladies to earn a paycheck and do everything around the house.

But if your partner likes to go clubbing with the girls but gets her panties in a knot if you want to hang with the guys, clearly there’s a problem.

If she has more shoes than Imelda Marcos or the Kardashians but freaks out when you buy the new iPhone, there’s a problem.

LYDIA LOVRIC is a former writer and broadcaster, currently enjoying life as a full-time mom to three little rug rats.