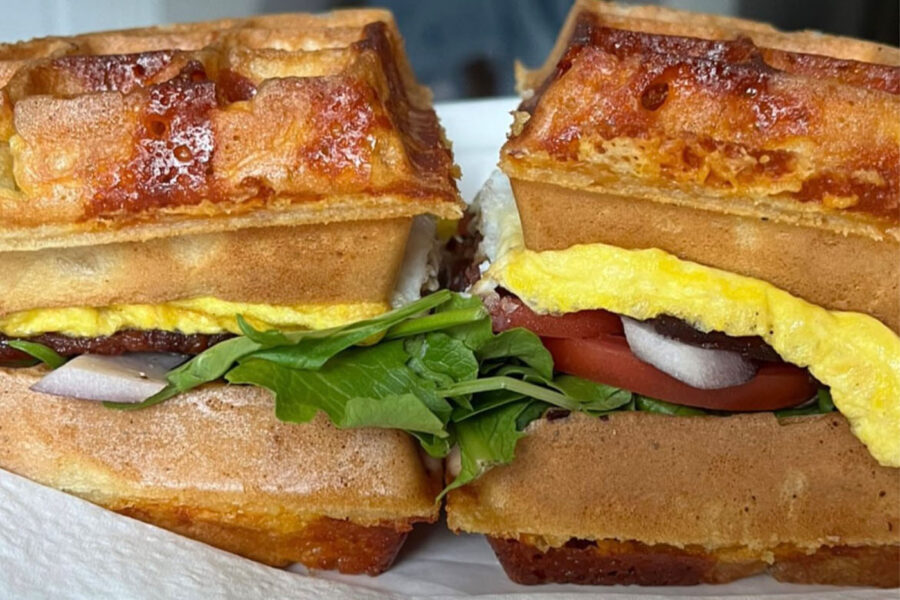 Top 10 Breakfast Sandwiches in Hamilton for 2022

Is there anything better than a breakfast sandwich?

Whether it’s on a bagel, a biscuit, or a bun, we can’t get enough of sandwiches loaded with morning classics like bacon, sausage, fried egg, and fresh tomato; and thankfully for Hamilton, the city has plenty of spots whipping up some hearty handhelds to help you start the day off right.

From laidback fare to bougie options, here’s our list of the top 10 breakfast sandwiches in Hamilton for 2022! 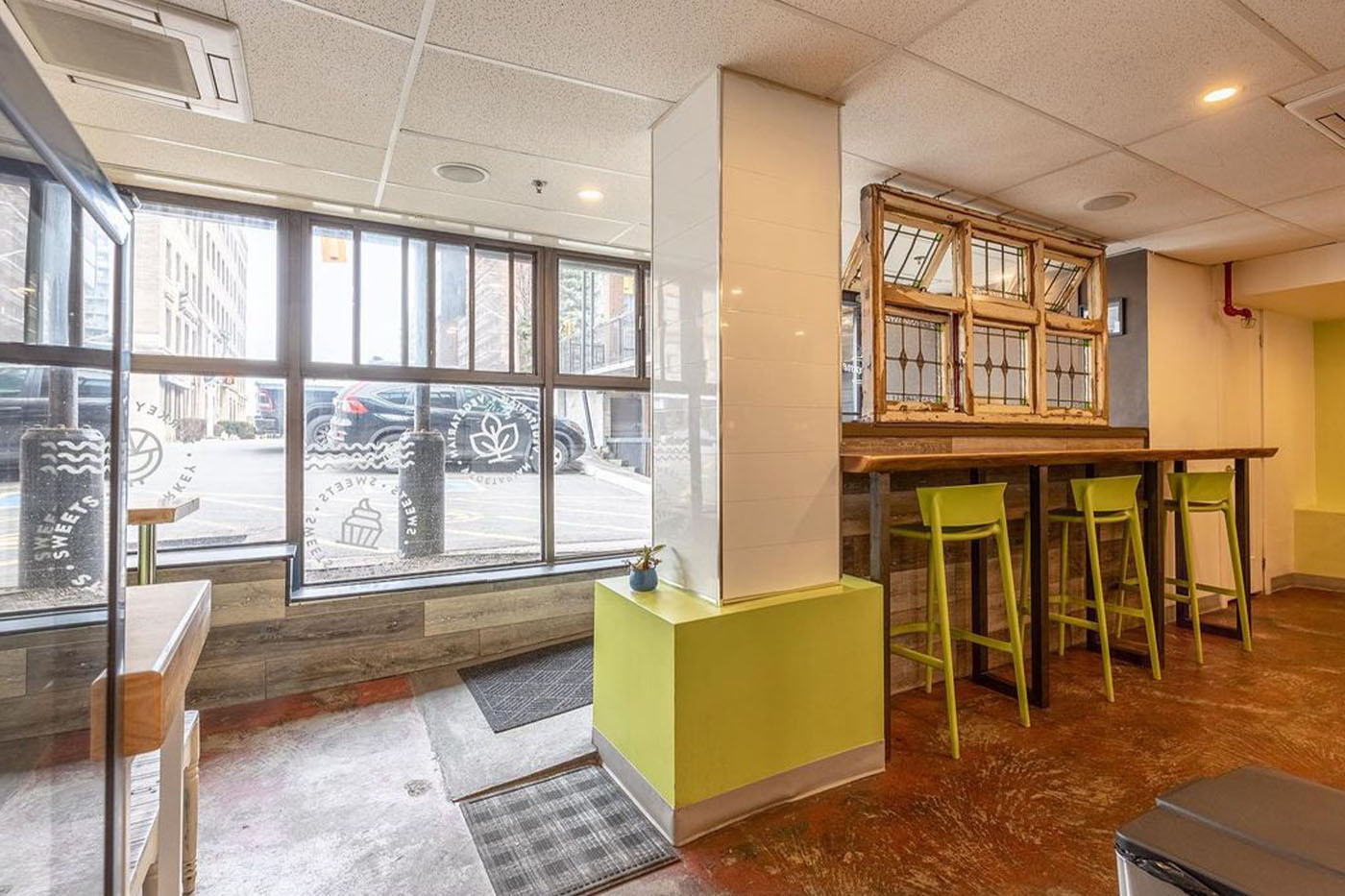 Known in Hamilton for its excellent deli-style reuben sandwiches, this local lunch favourite on James South recently started opening earlier and serving up some breakfast fare as well.

The menu is simple, with a Corned Beef Western Wrap and a mouth-watering Monte Cristo on hand. Their namesake Reuben Breakwich is simple yet delicious, loaded with a choice of house-made pork sausage, bacon, or ham as well as egg, garlic aioli, lettuce, and tomato. These brekkie bites are well worth a try. 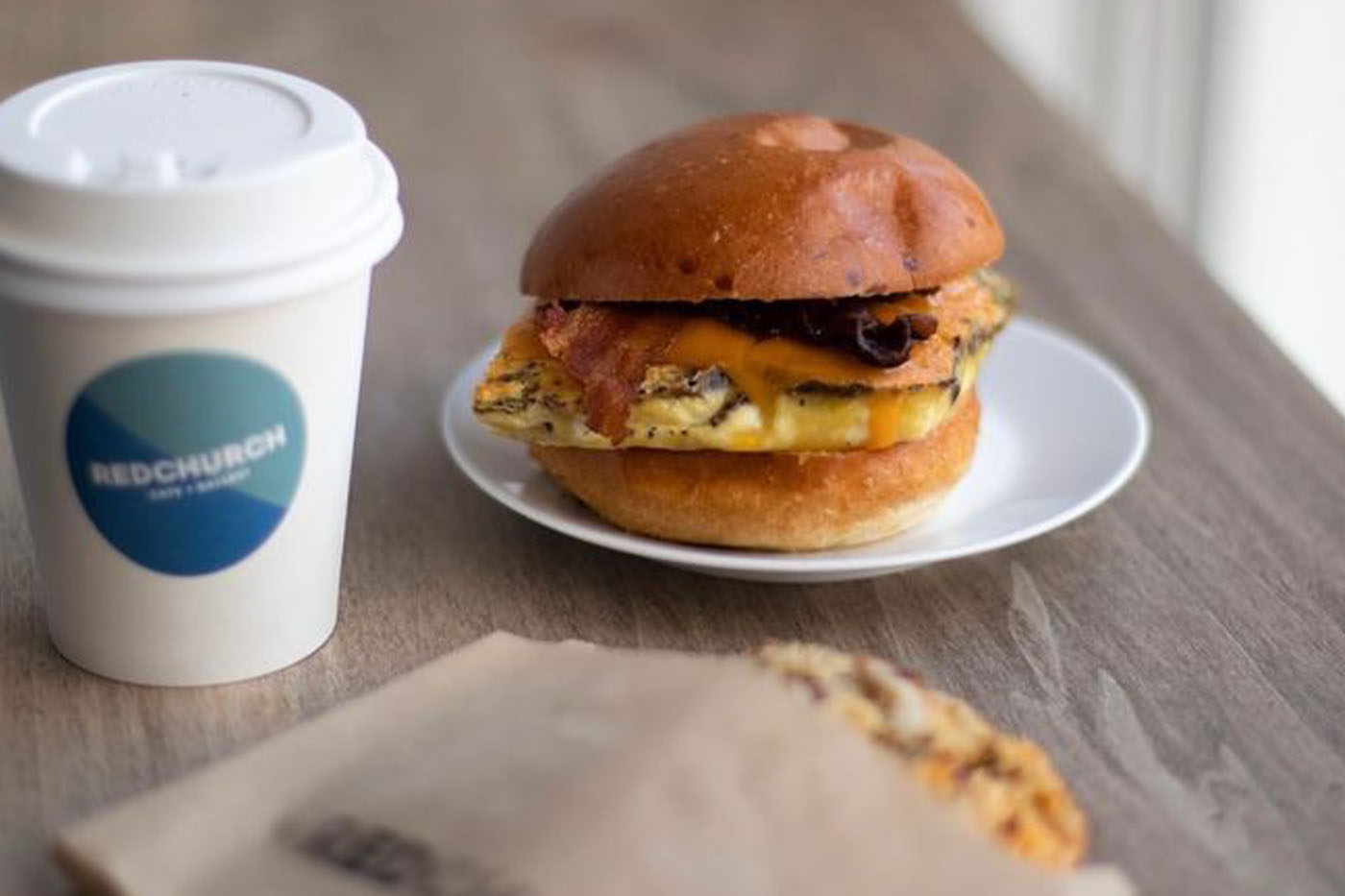 On top of excellent coffee and espresso served in one of the most gorgeous spaces in Hamilton, Redchurch Cafe is also known for a menu of light bites that are delicious and nutritious.

Morning options include ham & cheese croissants and breakfast burritos, but Redchurch also makes a mean breakfast sandwich with bacon, a free range egg frittata, vegan sriracha mayo, parsley, and cheddar on a milk bun. Grab one with an oat milk latte and you’re in business. 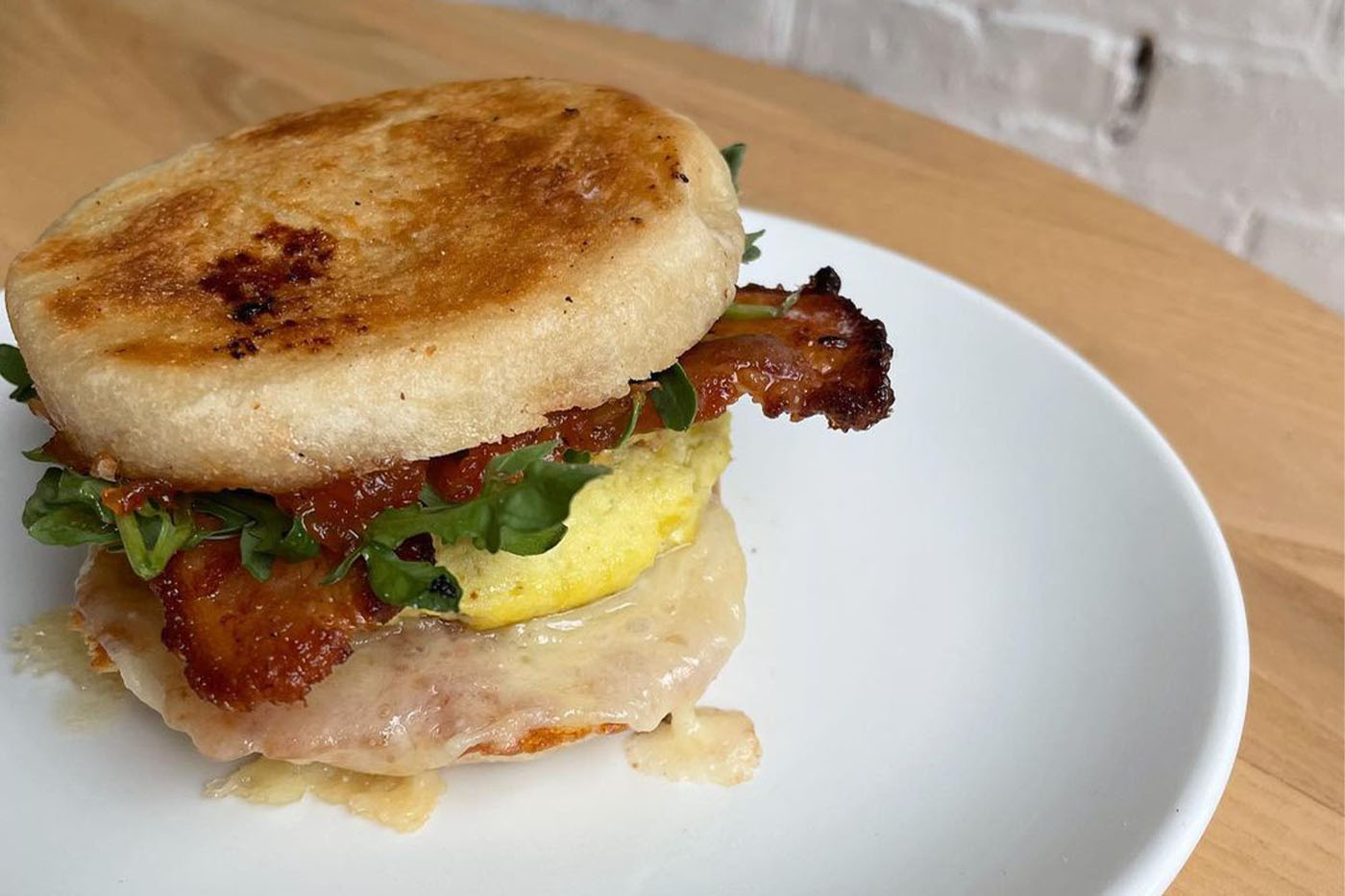 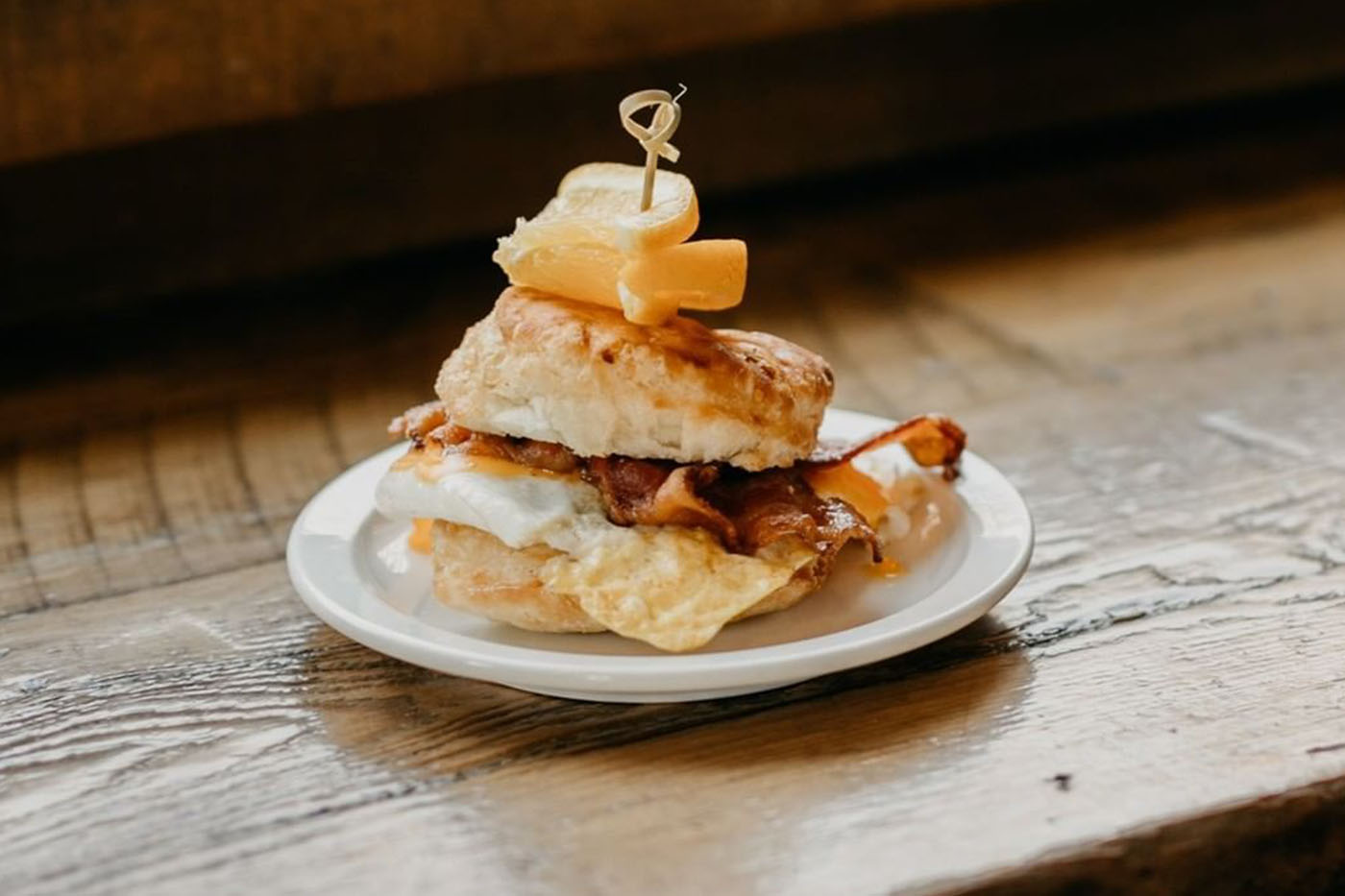 This Barton Village not-for-profit cafe and community hub is best known for its button jar payment system, where customers able to donate an extra few bucks with their order can purchase buttons that can be redeemed for a bite to eat by locals facing food insecurity.

On top of this important charity work, 541 sports a solid menu of breakfast and lunch items, often made with local ingredients. Their classic breakfast sandwiches is flavourful and filling, seeing a homemade buttermilk biscuit topped with a fried egg, cheddar, sweet tomato salsa, and fresh spinach (with an option to add bacon as well). Go grab one, and maybe buy a button or two while you’re there. 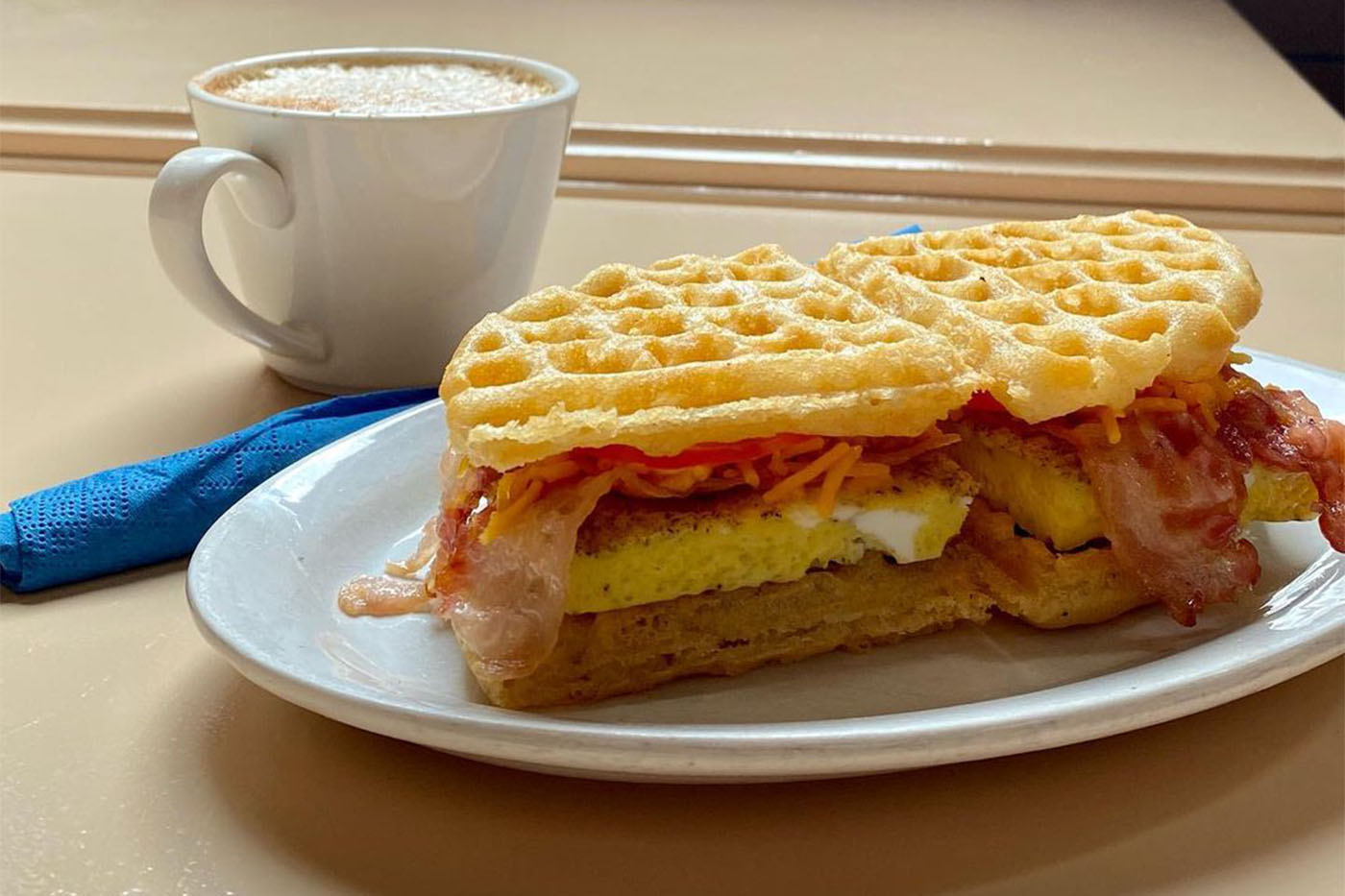 RELAY Coffee continues to stand tall as one of Hamilton’s most popular coffee institutions, notable for being one of the few local spots that also roasts its own ethically sourced coffee beans in house.

On top of delicious Americanos and drip coffee is RELAY’s menu of sandwiches, salads, sweet and savoury baked goods, and delicious breakfast sandwiches built on fresh waffles that are fully customizable. Available at their King William and Staircase Theatre locations, these are well worth sinking your teeth into. 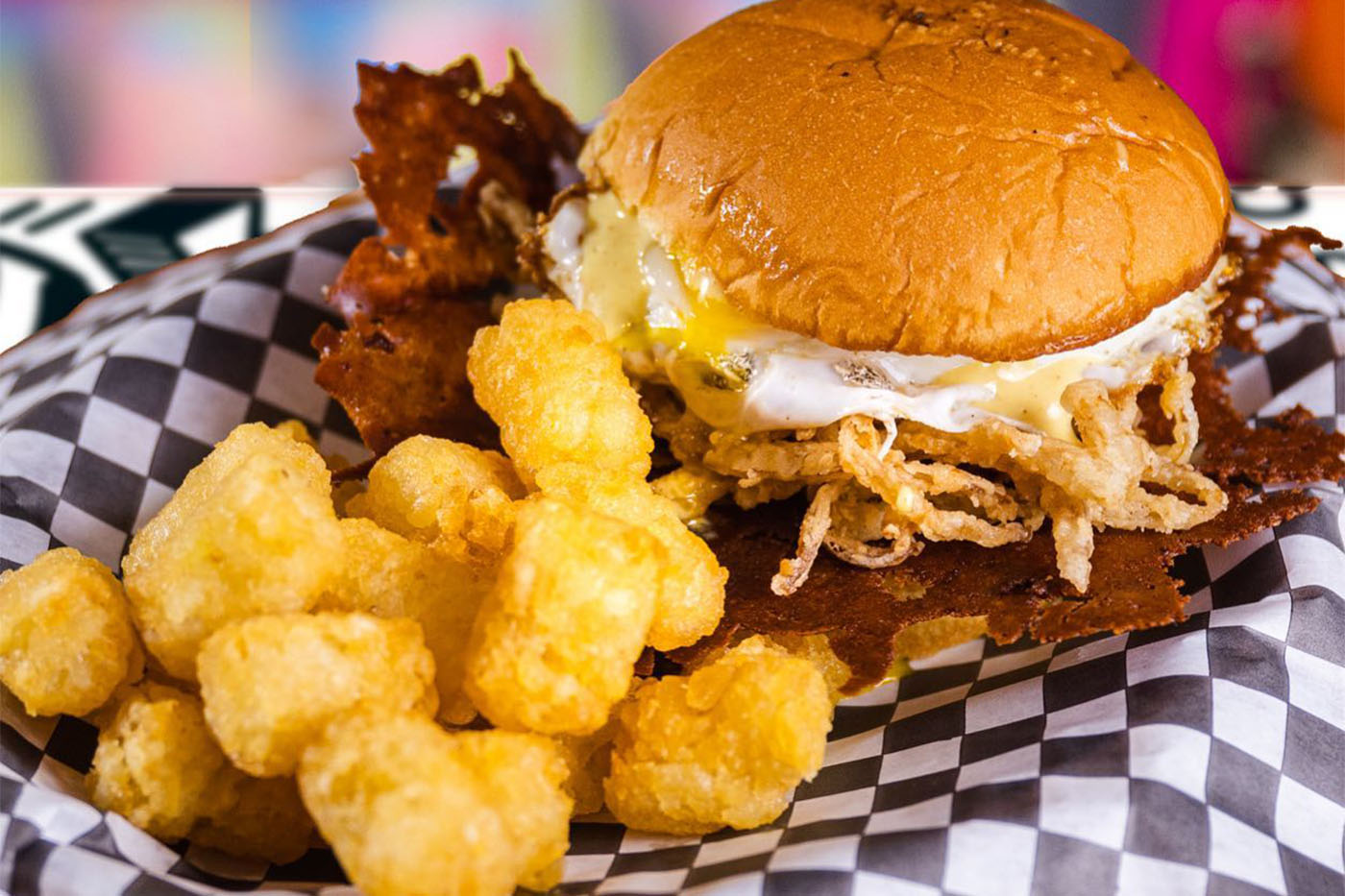 On weekends, Odds Bar also offers a special brunch menu with a list of breakfast sandwiches available including the Shooter, which sees an English muffin topped with bacon, fried egg, smashed tater tots, American cheese, and Hollandaise; the Roy, with an over-easy egg, mozzarella frico, fried onion, and brown butter Hollandaise on a Martin’s potato roll; and the Goldberg, with ham, Swiss cheese, maple bacon, caramelized onion, and mustard on Texas toast. So. Freaking. Good. 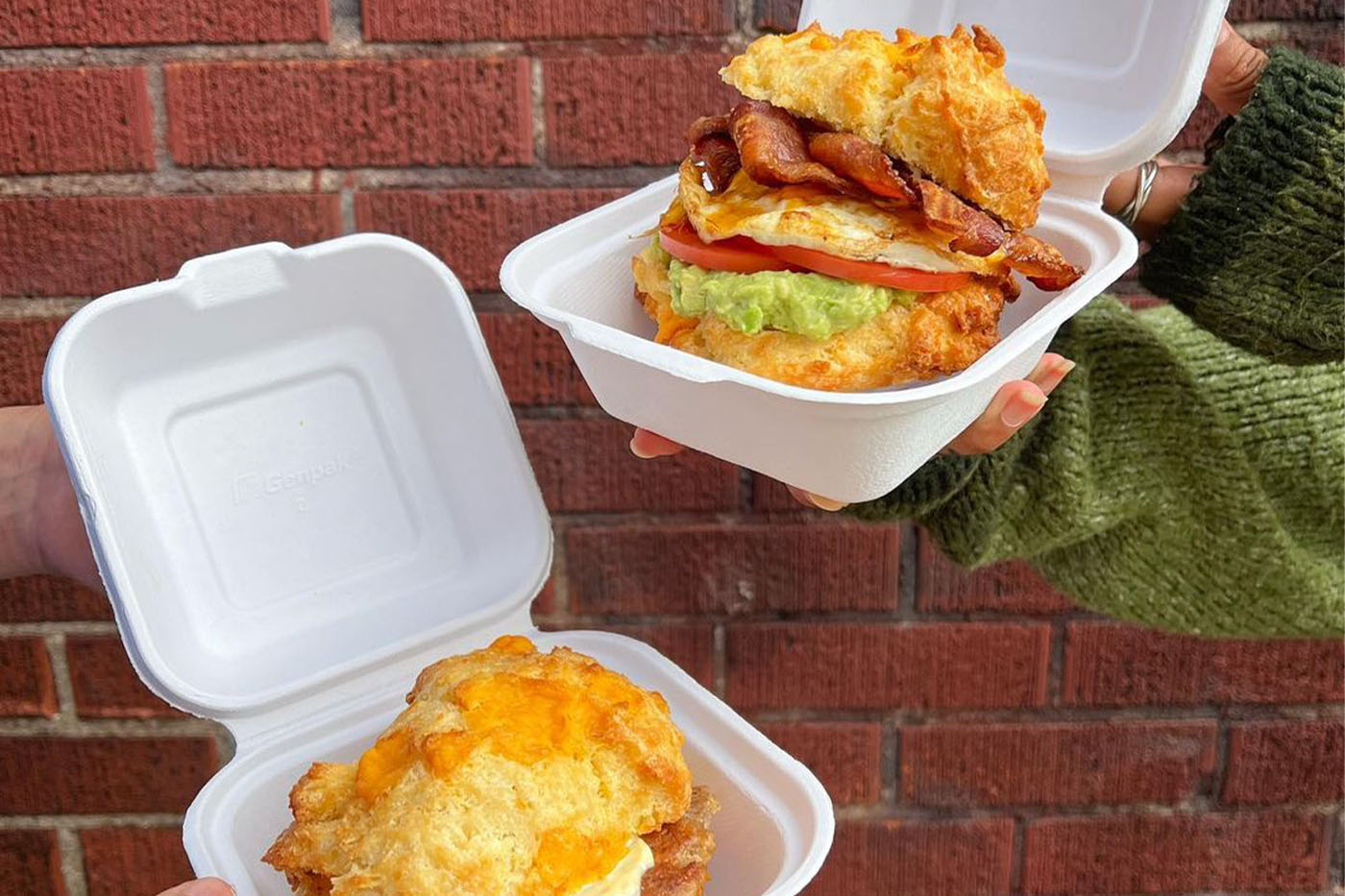 This homey Westdale Village coffee shop and eatery is serious about their breakfast sandwiches.

Alongside coffee, craft beer, lunch handhelds, and power bowls, Paisley also has a pretty stacked menu of handhelds including The Westdale, which sees a vegetable egg patty, tomato, arugula, cheddar, and garlic mayo on sourdough; and the Sausage and Egg with cheddar on an English muffin.

But here’s our special tip: hit up Paisley on Sundays to get those breakfast sandwiches built on house-baked cheesy biscuits. You’ll be glad you did. 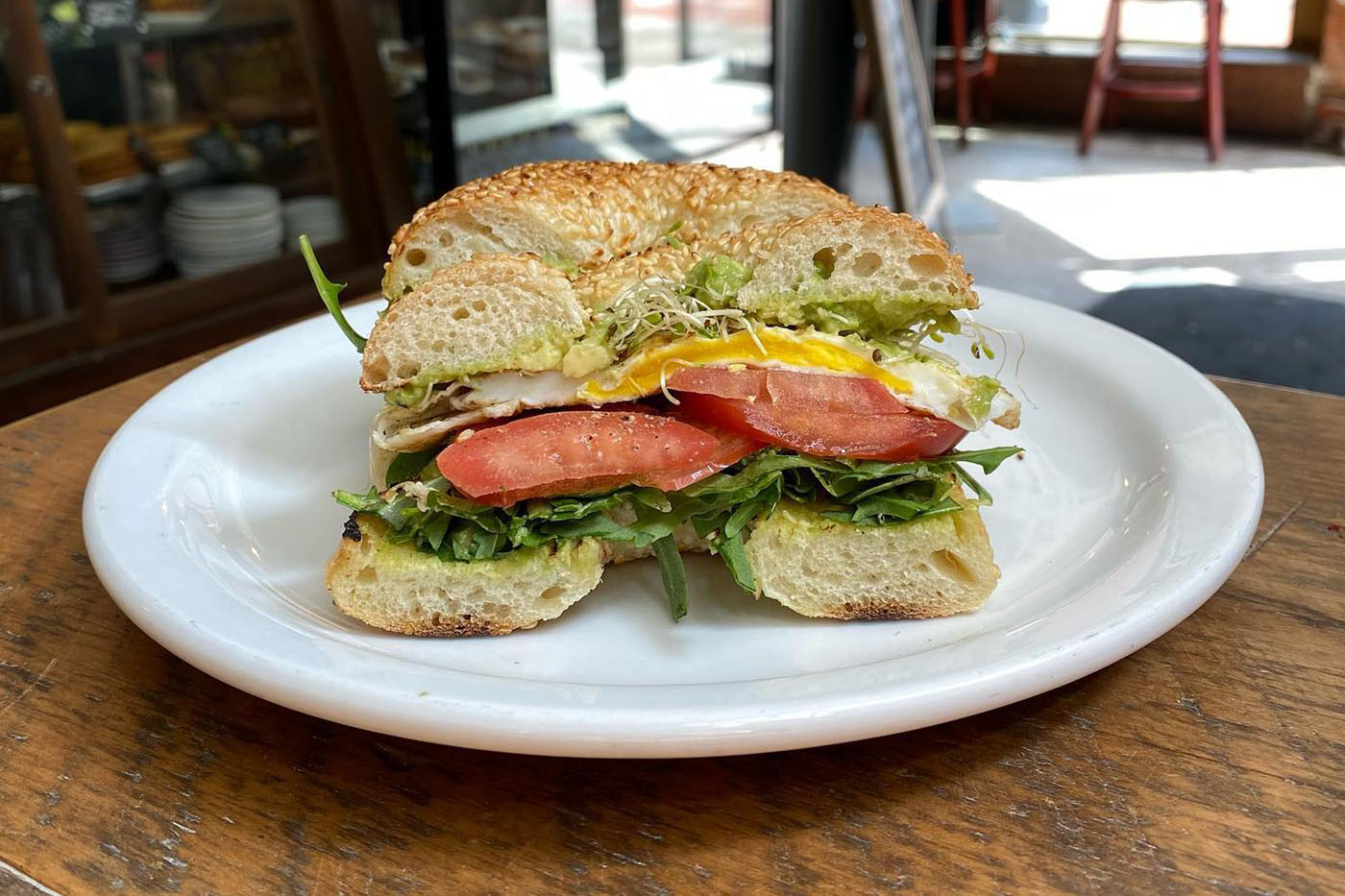 Mulberry Coffeehouse’s menu of all-day breakfast sandwiches including options for meat eaters and vegetarians alike, with choice of bacon, sausage, ham avocado, or spinach topped with tomato, arugula, cheddar, and a fried egg on a choice of sourdough bagel or croissant. Reasonably priced and oh-so delicious, you really can’t go wrong with a brekkie sando from Mulberry. 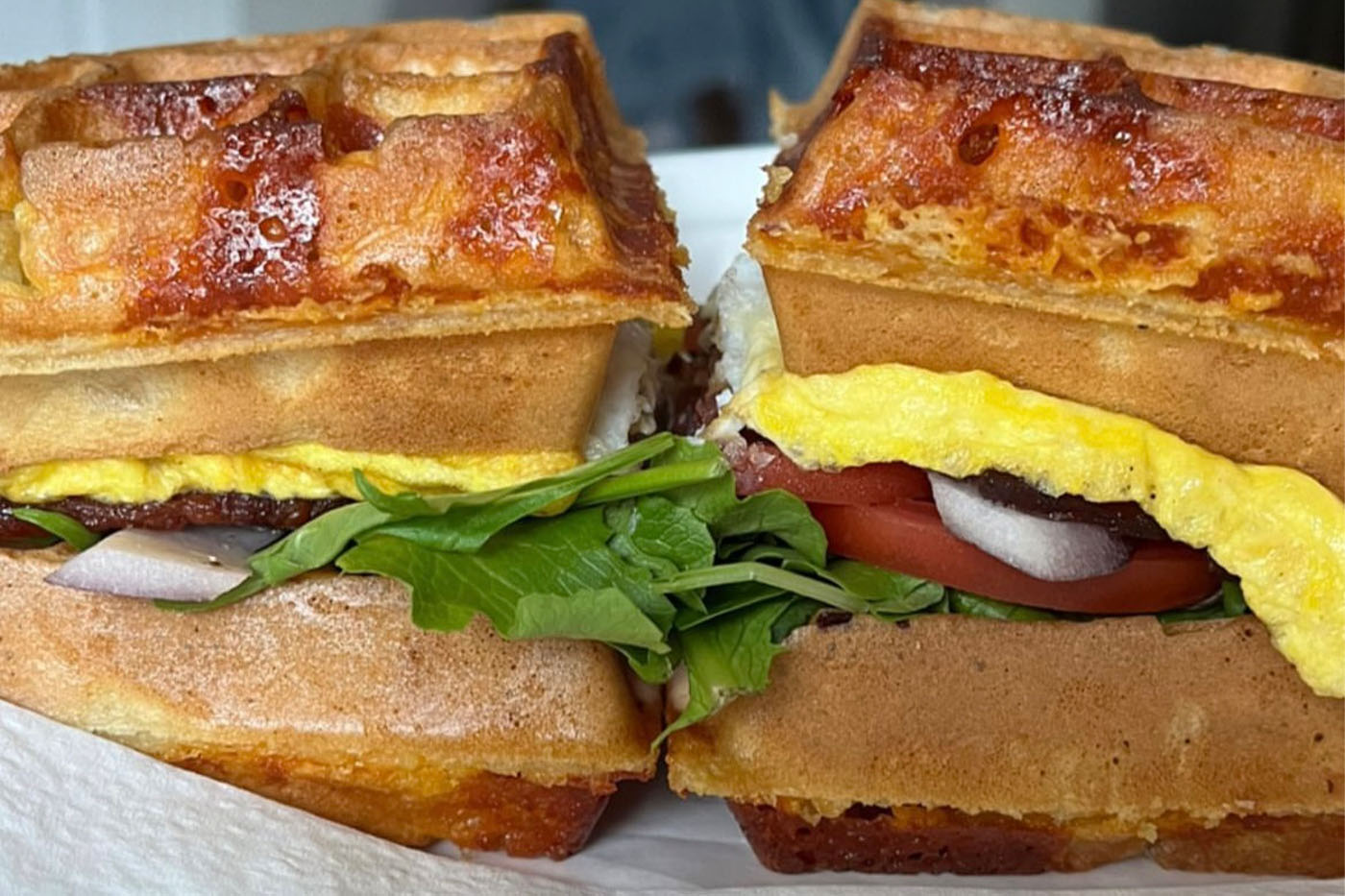 Cannon Coffee Co. is a shining gem in Hamilton’s food scene, its cozy cafe space at the corner of Cannon and Ottawa a home to excellent coffee and a practically legendary menu of massive homemade waffles that Oscar-winning filmmaker Guillermo del Toro said are the best he’s ever had.

That’s some pretty high praise, but anyone who’s had the Cannon’s waffles know that they’re seriously terrific, and they make for a tantalizing vessel for a number of massive and wholly satisfying breakfast sandwiches including one with bacon, over-easy egg, greens, tomato, red onion, and spicy mayo. 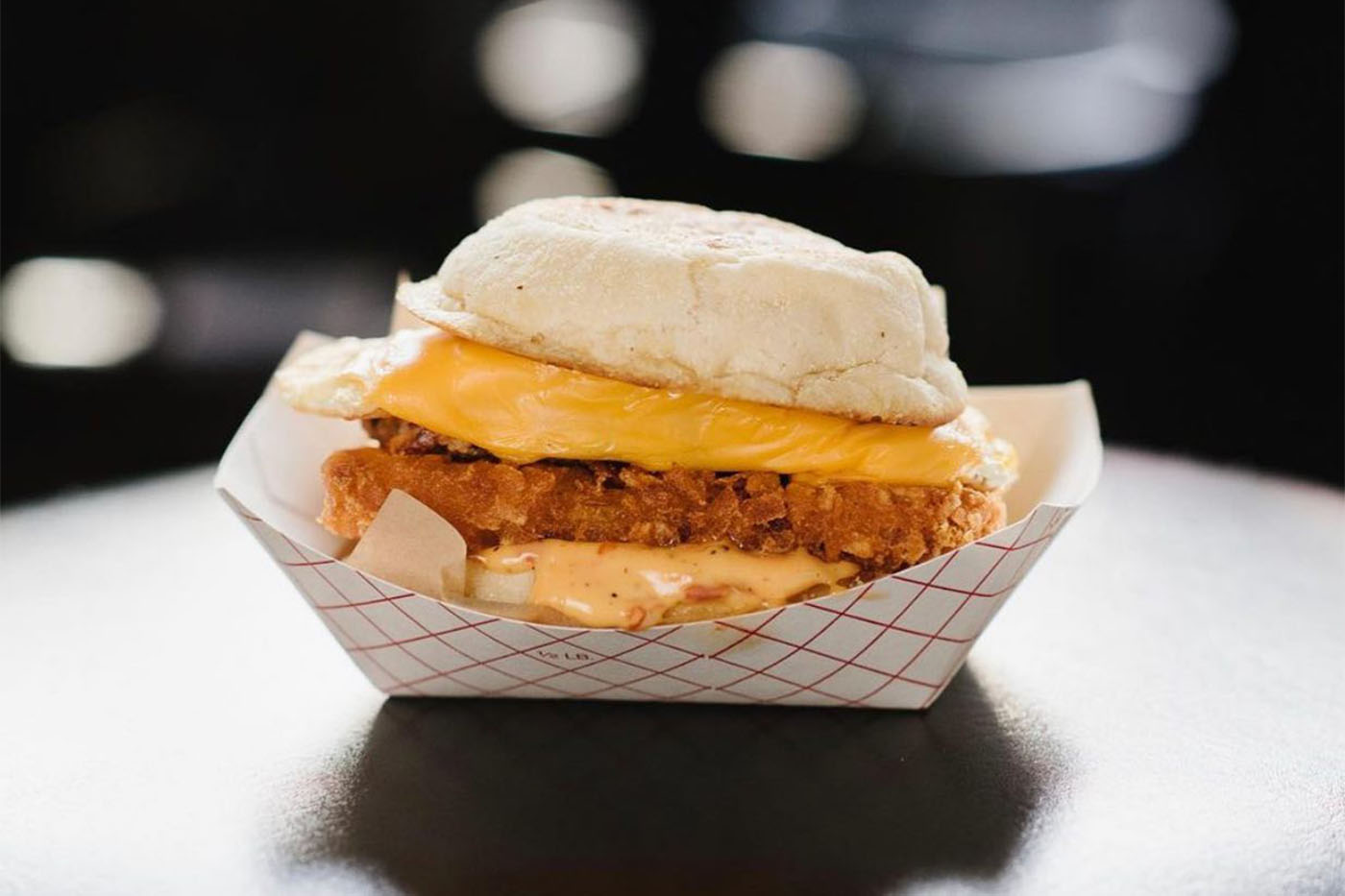 The Saint James is one of Hamilton’s best brunch spots, serving handcrafted coffee and creative comfort food out of a tiny cafe along James North.

Breakfast plates, tartines built on local sourdough, and salads are beloved menu staples, but the breakfast sandwiches here are really something special. The Drive-Thru is like a McDonalds Sausage McMuffin kicked up by several dozen notches, with a flavourful house sausage patty, fried egg, American cheese, homemade hash brown, and chilli mayo on an English muffin. For something a touch lighter, The Malibu is a delicious combo of bacon, arugula avocado, fried egg, hash brown, and chilli mayo. Either option is going to be a one-way, first-class trip to Flavour Town.

Looking to explore more LOCAL breakfast sandwiches? Then be sure to explore our search page!