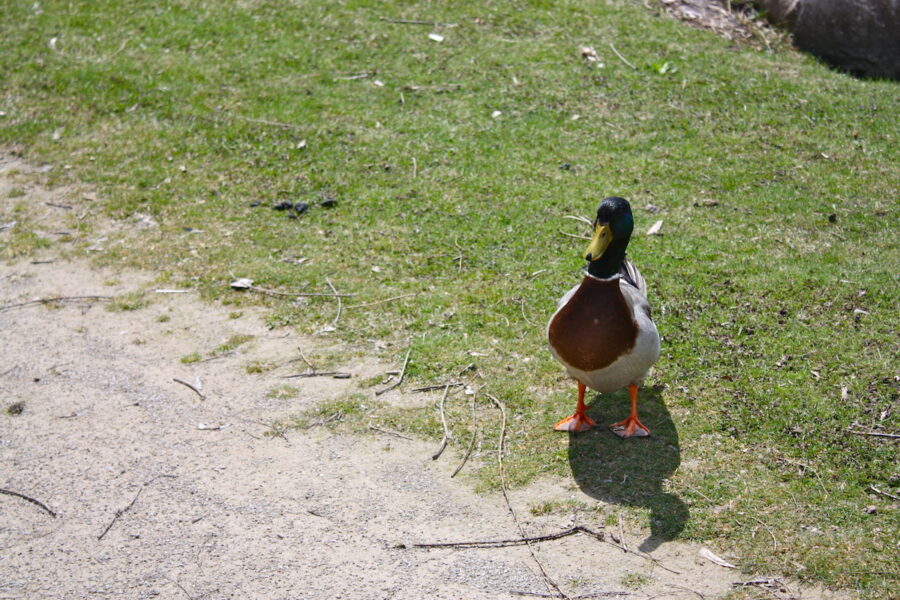 A Diatribe on Ducks

A visitor from Brazil once asked me, “Do Canadian people worship the ducks?”

I asked, “Why would you say that?”

So we walked to my bathroom. There, on the wall over the towel rack, was the picture I’d forgotten I owned: a laminated plaque depicting two flying, flat beaked, feathered fowl. I’d got it at Toronto’s Honest Ed’s for my first apartment and, ever since, had dragged it from place to place.

I said, “Those are Canada geese, not ducks.”

She gave me an odd look, saying, “Ducks, geeses. What’s a difference?”

“All right, I guess they are basically the same thing. But not every Canadian has a picture of one in their house.”

“Your parents are immigrants. I mean people who were borned in Canada.”

I mentioned a few local people we both knew. In each case, she told me exactly where in their house they had a depiction of waterfowl. Apparently, she’d been collecting evidence for her theory for a while, snooping through the homes of each host who invited her over, avidly hunting for duck imagery. She described her finds: the many framed, oil-paint portraits of wetlands with feeding ducks (sometimes also depicting a hunter pointing a firearm at the waterfowl); the artistic photos (like the one in my bathroom) of ducks/geese in flight; the statues of waterfowl, in various aesthetic modes; the lampshade with a flying-duck pattern; the shoe-horn with a duck-head handle; etc.

She concluded her rant with, “So that’s why I think Canadians must have a religious worship for the ducks.”

I had to admit that she made a good argument about ducks being considered holy animals in Canada. Despite all the duck-themed art, few Canadians eat duck — just like very few Indian Hindus eat cow, their sacred animal. On Canadian highways, you’ll often see cars with DUCKS UNLIMITED stickers on their rear bumper. From what I can gather, Ducks Unlimited is a shadowy, well-funded organization of hard-core duck-boosters, trying to turn all of Canada into a giant amusement park for ducks. This radical pro-duck agenda has surprising public support. Like the sacred cows in India, allowed to wander freely throughout the land, the sacred birds of Canada are indulged with lives of privilege and luxury. Huge herds of Canada geese roam our parks and waterfronts, dropping huge amounts of grass-green poop, 99% of which will eventually be stepped in by humans. If you’re walking and meet a Canada goose walking the opposite direction, it will expect you, the lowly human, to step out of its way. Refusal to do say may result in Canada’s sacred bird hissing at you and flapping its wings until you step off its path.

But our relationship with ducks is more than just spiritual. Ducks also have a huge cultural importance. During the previous century, Walt Disney created the iconic cartoon character Donald Duck, along with his girlfriend, Daisy Duck (no blood relation), and three mischievous nephews — Huey Duck, Dewey Duck and Louie Duck — and a frugal uncle from northern U.K., Scrooge McDuck. Despite Donald’s speech impediment and notoriety for refusing to wear pants, the Duck/McDuck family’s celebrity status was Kardashian-like, with popularity far surpassing that of their rivals, the ambitious Mouse family (Mickey and Minnie). Donald, a turbulent genius known for indulging in wild temper-tantrums at the slightest frustration or set-back, represented the Freudian subconscious, or “id,” of mass North American culture, according to the committee that awarded him the Nobel Prize in 2011, which also pointed out that several of Donald’s homespun catchphrases — e.g. “Aw, phooey!” and “Hiya, toots!” and “Boy oh boy oh boy oh boy!” — have entered our cultural lexicon.

While the Duck/McDuck family dominated the Golden Age of Hollywood, the medium of TV was ruled by that other quacking colossus of art, Daffy Duck. Offstage, Daffy was a mild, thoughtful, somewhat shy fellow, fond of reading Germanic philosophy (Hegel, Kant, etc.) and playing bridge. However, like his drama protégées Robert DeNiro and Philip Seymour Hoffman, Daffy could fully transform himself for an acting role. After his stage entrance — “Overture, cut the lights / This is it, the night of nights” — this normally reserved and dignified individual would start to bounce randomly around, both of his eyes rolling in different directions, shouting “Hoo-hoo!” and spinning his beak in complete circles around his head. Or Daffy would play a shallow, scheming jerk, convincingly pretending to be jealous of his co-star Bug Bunny, even going so far as to accuse Mr. Bunny of being “desthpicable!” Occasionally, Daffy even played himself sympathetically. With such phenomenal acting talent, it is no surprise that this thespian icon was recently knighted by the Queen of England — as Sir Daffy of Buckingham Pond.

The greatest musical hit of the 20th Century was either “Disco Duck” by Rick Dees or “Rubber Ducky” by Ernie.

And in the heartwarming ‘80s teen drama “Pretty in Pink,” the Molly Ringwald character’s best friend is a charming man-child of ambiguous sexuality, known only as “Duckie.”

Someday, perhaps, historians will look back and rename the 20th Century as the Duck Ages.

(To be fair, not all 20th Century ducks were as successful as Donald Duck, Daffy Duck, Disco Duck, Rubber Ducky and “Duckie.” For example, Howard the Duck, the star of a self-titled 1986 film that opened to hostile reviews and poor ticket sales, is now working as an assistant manager at a Taco Bell in Mississauga, also attending weekly Narcotics Anonymous meetings. While failing to make it big in Hollywood, Howard had turned to crack — or, as he tearfully confessed to Rob Ford at a tear-drenched N.A. session, “All day long, man, I’m thinking of nothing but quack! I’ll still do anything for quack! My name is Howard and I’m a quack addict!”)

Today, in 2014, are ducks still at the core of our cultural identity?

To answer that question, I visited the new Homewood Suites by Hilton Hotel on downtown Hamilton’s Bay Street. The Hilton name is synonymous with taste and fashion. On the wall of the Hilton hotel lobby, I found a plaque featuring a large portrait of a duck. I asked the woman behind the counter about it and she explained that “Lewis the Duck” is the mascot of these Hilton hotels. Lewis is also the central character in a series of children’s books, I was told. He had recently appeared, with his wife and their ducklings, in New York’s Macy’s Thanksgiving Day Parade. Lewis is the latest in a long line of celebrity ducks.

Ducks are still hot – I mean, just look inside your toolbox. You probably have a couple rolls of duck tape in there, don’t you? Look in your bathroom cabinet – isn’t that a bottle of Toilet Duck cleanser? When you’re partying in the VIP section of Hamilton’s hottest nightclub – what else would you order but Grey Goose vodka? Or just go to any local playground and listen: you’ll hear kids playing a chanting game – as they have for generations – that goes “duck, duck, goose!” Open the sports pages – the NHL Anaheim Ducks are flapping towards another Stanley Cup this season.

Don’t call it a comeback – because the ducks ain’t never been gone.

Before I conclude this discourse on ducks, I have to address a disturbing topic. Anyone under 18 years old, please stop reading and go to another, less controversial page of urbanicity. Thank you. Now — how do I politely say this? Well, I’ll just be blunt — readers, during my research for this article, I learned that there are sick perverts out there with an erotic interest in waterfowl. I was shocked and disturbed to encounter websites featuring explicit images of humans attempting to make love with geese and/or ducks. The confused-looking birds wear skimpy lingerie … or nothing at all … The offensive motto of these pervs is, “It’s fun to **** a duck!”

Call me old-fashioned, but I find this shocking and so, so wrong! I may be passionate about ducks myself, but just as friends — never more than just friends.