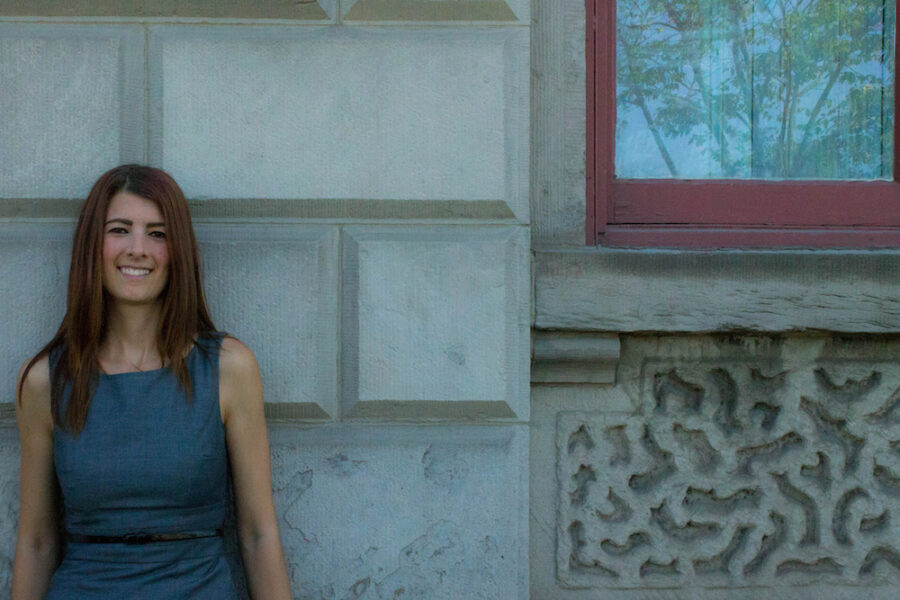 When I first came across Linda Michelle’s photography, I was so excited.  Her unique perspective on the places and spaces in our beautiful city made me stop in my tracks.  She often displays her beautiful photographs on Art Crawl nights, frequently at Julia Veenstra’s studio.  Her work is also available at The Hamilton Store (165 James Street North) in a giftware line; artcards, mini prints & a smaller 4-photo collage mounted print of the Hamilton Tall Ships and the four seasons of Gore Park).

I had the privilege of sitting and chatting with her over aperol spritz cocktails at Aberdeen Tavern.

To be real, to be one of a kind, to not be afraid of who I actually am.

Photography wise; the timing of certain things happening, a bird flying, or a bus getting in the picture right as I’m taking it, and the colour of it goes with the colour of the background.

Graduating from the business program at Mohawk. It was a two-year program that I put a lot of time into. Now that it’s done, I’m excited to see what comes from that.  Having the opportunity to get back into the art crawl scene again has been great.  I am usually a guest artist with Julia Veenstra,  so that’s been amazing.

I grew up here for most of my life.  I love the beauty of the city and being able to capture it. I love seeing how much has changed over the years.  I’ve been here since I was three, we lived on the mountain but I’ve been down in the north end for the last eight years or so and just seeing the change on James Street over the years has been mind-blowing and the fact that I know that it’s for a reason, a bigger purpose than just business.  Also, it’s dear to my heart.

KB: What do you think makes a memorable photograph?

Being able to capture it in a way that might not just be appealing to me, thinking about my market, seeing it in a different way that people would normally see it in. A lot of people just drive by a building and they don’t look up.  So many people ask where my photos are from, they don’t even recognize that it’s Hamilton, because the photos are often taken looking up, or from a different angle.

KB: What do you want your audience to take away from your work?

A new perspective of the city.  The fact that Hamilton has been known for so many years as a steel city, just being able to have people see a new identity for the city.  I want them to walk away with inspiration and a new vision for what’s in the city.

KB: What’s the best thing about what you do?

Being able to meet so many people through what I do. I am a people person, I love being around people. You just run into so many people taking photos downtown.  Making connections and networking.  I love taking photos, I’m passionate about it but I am more passionate about the people I meet and putting a custom piece together for them of how they want it because that’s something I know not a lot of people offer.  To offer a custom collage of 16 or 22 or even 4 photos that mean something to them, that’s something that gets me excited.

KB: What’s the worst thing about what you do?

When I can’t take my daily walk to post my #hamont photo of the day.

KB: Why do you take photos?

How it all started was, I used to do errands downtown when I worked in the legal field.  I had to do court filing and the banking, all of that.  I got my iPhone in 2010, I would just be looking up and I was amazed at what I was seeing.  It was before Instagram became popular, so I would just edit my photos in there and post them to Twitter.  I didn’t realize people were following me. I was working full time while I was doing this.  In May of 2012, I got laid off from my job.  I was sitting with a close group of friends one day for lunch and one of them suggested “You should really do something with photography, you really have an eye for it” and so I thought about it.  At the end of June, I launched my first website and it just snowballed from there.  I got to create my first coffee table book in September 2012.  Then, that fall, Radius had requested some of my photos and I explained they were iPhone photos and they couldn’t be blown up so I’m restricted to the size.  That’s when the collage idea started and the mounted prints started. So, to answer your question, it’s because I really love taking photos and it’s not like a job to me, it’s actually part of who I am.

KB: When you’re out shooting, how much is instinctual versus planned?

I would say 80% of it is instinctual.  A lot of it is not planned.  It’s only planned when clients of mine have requested certain photos be taken for them.  My next coffee table book is going to be of Ottawa Street, so when I get out there, that’s going to be planned.  A lot of my shots are just in the moment.

How do you like your coffee? Regular; brown sugar and 1 milk

What is your favourite activity in Hamilton? Going to the Bayfront

Person you want to have coffee with: Sandra Bullock

A book you plan on reading: Inkchanger by Ellie DiJulio (a local artist). It’s based in Hamilton, so I’m really excited to read it.

What do you love on a pizza; Feta cheese, pineapple and chicken

If your life was a song, what would the title be? Light up my world