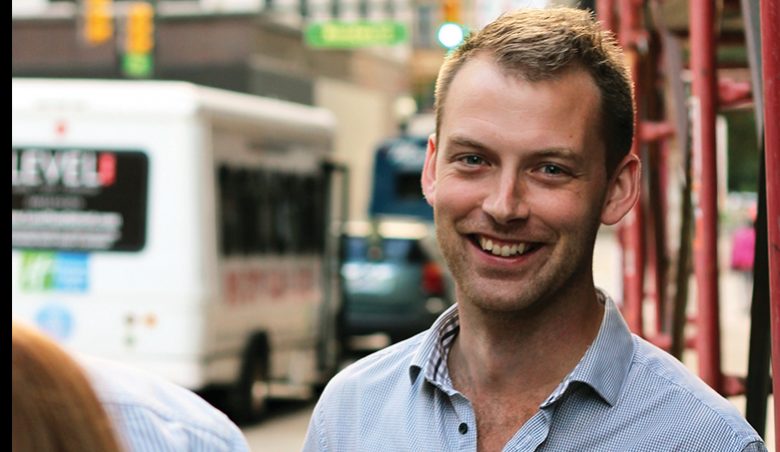 When I first learned that Martinus was passing on the reins of urbanicity Magazine, I knew I needed to dust off my Cocktails with KB feature and come out of retirement. When we started this column, I asked him if he would ever be a topic of one, to which he replied “Maybe, someday. But something big has to happen for me to do that.” I would say his last issue as editor, publisher, and owner of this magazine is pretty big. Having known him for 10 years, I knew this interview would be interesting, intriguing and exciting for urbanicity readers. His passion and deep love for Hamilton, and his unending motivation, determination, and his sheer grit make me proud to call him my friend. I can’t wait to see what he does next.

Grab a cocktail, or a beer, and enjoy!

Two things, both from my dad. The first one would be when I was considering breaking up with Nina for the first time (in Grade 11) and he said “If you have to ask, or think about it this much, it’s probably the wrong thing”. He was right: it was the right thing, but at the wrong time. We broke up then, but years later we eventually got married. So, since then when I wasn’t confident about a big decision, I would walk away. It’s like the 60/40 rule, if you say you’re 50/50 on this one thing, don’t do it. You always need to be a minimum of 60% sure of something that has real consequences. That’s the first piece.

The second piece is something my dad always said to me (can’t imagine why!), is from the Biblical book of Romans “Do not think of yourself more highly than you ought, but rather consider yourself with sober judgment”. I’ve always taken that to heart.

Who is on your guest list for your ideal dinner party and why?

Pierre Trudeau. I love Justin, but I would want to have dinner with Pierre because he was the catalyst for a lot of the Canada we know today. I would love to ask him about the Charter of Rights and Freedoms, and also because in many ways, the world that we have now is reminiscent of the unstable, tumultuous times of when Trudeau was Prime Minister.

Guy LaLiberté, the creator of Cirque du Soliel. He redefined what a circus is, and did it in a way that brought the entire world together in a completely globalized theatre company that is still proudly Canadian-based.

I would love to have Eddie Van Halen there because, out of the group of people I would invite, he would be the only one who would join me in drinking beer. Seriously though, he has been my guitar idol forever. I have an EVH Wolfgang and I used to even have a 5150 stack. He is a modern musical genius that truly revolutionized the electric guitar as an instrument for countless artists after him.

I would want to have Elon Musk because I think he is the Thomas Edison of our day. I think he is reinventing many of the inventions of the last century. I think 200 years from now he is going to be someone that people read about in textbooks because he will have redefined what energy, space travel, and transportation mean to people.

I would want to have Ludwig Van Beethoven. While he has always been my favourite composer, I think he and Eddie Van Halen would have an absolute blast at the end of the table together and he would probably join us in drinking the beer. He wrote pieces and symphonies, that from his time onwards, intimidated everyone in their compositions, to the point where nobody wrote 130 symphonies ever again. Before him, Haydn wrote over 130 symphonies. Beethoven wrote 9 symphonies, did a mic drop, sadly he died young, and that
was it.

Martin Luther. (KB: Wow, this took a turn. Can I be there? MG: No, I can only have 7!). Martin Luther was an academic, and he stood up against the entire Church of Rome. He did so on a principled, reasoned basis. His 95 theses on the door of the Wittenburg church in 1517 changed the course for the next 600 years of history in western politics, religion, social justice and policy. If you don’t want to have someone like that at your dinner table, you’re missing out.The final person at the table

The final person at the table would be Nelson Mandela. He would have a good conversation with Elon Musk (a fellow South African), and would have a fantastic time with Mr. Trudeau, but I think he would bring a whole additional viewpoint to the conversation.

We’re two months into 2017, what are you most looking  forward to in the remaining 10 months?

Something I’m very excited about is the birth of my son, in April (God willing). I’m also pretty amped about the next phase of my business. On another note, Nina and I are currently renovating a new house, and exploring some new opportunities. So, where we’re going to be a year from now will be a radically different place from where we are now. The next 10 months are going to a remarkable period of change and growth and transition.

What’s the best thing about what you do?

Professionally, I truly, genuinely, love working with small businesses. I love meeting people, working with them. I love learning their business, learning who they are, what they do,
and then finding a way to work with them to market or advertise their company. I love running into people, walking around the city. I love popping into shops, visiting friends and their businesses and developing constructive relationships. I love, everyday, living, working and playing among all kinds of amazing people.

Personally, I love being a dad. I love picking my daughter up from school. When she sees me at the door, she screams and comes running toward me for a big hug.

Who or what has been the greatest influence on your career and why?

If you could wave a magic wand over Hamilton, what three things would you want to accomplish?

Term limits on council. If you can’t get your work done, if you can’t make your mark in 8 years, you’re ineffectual. Get off. Not having term limits is holding our city back because councillors build fiefdoms and complacency. I do not doubt that they mean well but, at the end of the day, a seat on City council is not a career, it’s a calling. Bring your gifts, views, and ideas, and then leave graciously. Time for someone else. One of the marks of a healthy democracy is the rotation of power.

Another thing would be for the entire city to understand that we are all one city. At the end of the day, all of our tax money goes into one place, and all of our services and administration comes out of that same one place. We need to learn to get along and we need to learn that what’s good for one area is often ultimately good for all of us. When LRT goes in downtown, Ancaster, Binbrook and Sheffield all benefit along with the downtown. When the rural and suburban areas thrive, everyone benefits. Simply put, what happens to the city happens to all of us. We’re all in this together. We need to get over our regionalism, and function as one city.

You’ve run for city council, you’ve run a film festival, and you’ve owned a magazine all in Hamilton. Where do you think your love and passion for this city come from?

I don’t know. I think this city has a compelling narrative. This city was small, became rich and powerful, then suffered economic decline and now is clawing its way back by itself. I love the people in this city. They’re real, they’re tough, they’re creative, they’re ambitious, they’re ideological, and they’re confrontational.

Honestly though, I think I love Hamilton because I chose to love it. I think that it’s much like any good relationship, if you can say exactly why you love something or someone, then that love can be subject to change when circumstances change. I have chosen to be here, I have chosen to love this city, and I don’t think it’s based on any reason or rationale. I simply love Hamilton.

What’s next for Martinus Geleynse?
We’re about to find out! For one, the largest part of our company over the last several years has been our creative agency side. So, I look forward to building that under the new brand called Make Media to serve local small and medium sized businesses. I also look forward to doing some new things, and applying myself in new ways and some of those are yet to be determined.

BEST GIFT YOU’VE EVER RECEIVED:
My Swiss Army knife from my dad. I got it for my 10th birthday. Once, when I was in France, I accidentally had it in my carry-on, and I got stopped at security in Charles de Gaulle airport because they wanted to confiscate it. I left security with tears in my eyes, sprinted to the first customer service desk I saw and explained the situation to the (fortunately) sympathetic French woman at the counter. She mailed it all the way to my dorm room in Grand Rapids, Michigan for me (probably with her own money). It arrived several weeks later. I still have it.

HOW DO YOU LIKE YOUR COFFEE?
Large. Tim Hortons. Roll up the Rim. Single Cream.

A BOOK YOU PLAN ON READING:
“Detroit: An American Autopsy” by Charlie LeDuff

WHAT INSPIRES YOU?
Compelling narratives

WINDOW OR AISLE:
Always a window. There’s no point in flying if you’re in the aisle.

FIRST THING YOU DO WHEN YOU GET HOME?
What day of the week? Tuesday. Have dinner with my daughter.

WHAT’S SOMETHING NEW YOU LEARNED IN THE PAST WEEK?
The scale, beauty, and accessibility of the American Capital during a weekend trip.

PROUDEST ACCOMPLISHMENT?
I don’t know what the proudest would be, but I’m tremendously proud that urbanicity Magazine has grown and flourished over the last six years. I remember when we first launched the magazine, people thought we were crazy to start a print publication in Hamilton in 2011.