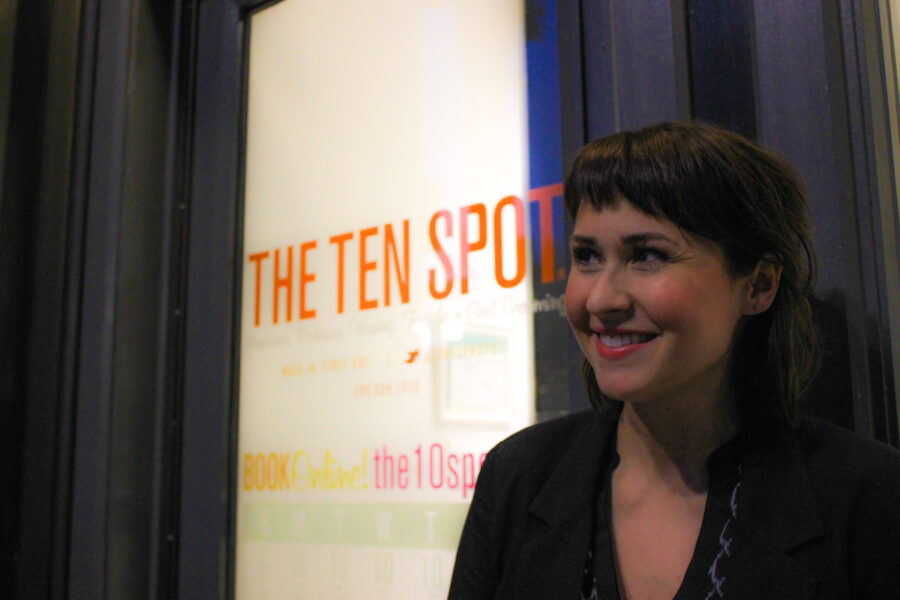 [vc_row][vc_column width=”1/1″][vc_column_text]I got an email one day from a guy named Brady telling me that I needed to meet his wife Kristen for cocktails. “I think you and she would really get along.” Well, that was an understatement. Kristen Wood is the founder and owner of The Ten Spot, a unique brand of salon/spa for women (and men!). The company started out in Toronto and is quickly expanding with franchises across Canada. Over drinks (Dark and Stormy for her, New York Sour for me) at Two Black Sheep, we chatted, and quickly moved past the awkward “blind date” portion…that lasted about 5 seconds. We talked work, being a woman in business, family, music, TV shows, Gangsta’s Paradise and our much-loved city of Hamilton. Grab a cocktail, enjoy our interview and then book an appointment to treat yourself at the Ten Spot on James North!

Why Hamilton?
Because I met and fell in love with my [now] husband. He is from Hamilton and was working at St. Joe’s. He ended up moving in with me [in Toronto] for a while when we first met. After about two weeks, I was like; “I am not driving you to Union Station at 5 AM every morning, so let’s move to Hamilton.” For my job I can be more flexible, I’m not 9-5, so I can miss rush hour. I ended up really loving it here. I grew up in Winnipeg and it’s really similar in terms of the layout and the landscape and the lifestyle.

Three words to describe Hamilton?
Proud. I find Hamiltonians are very proud, which is very nice to see.
Hip. I find there are a lot of hip, cool businesses.
Considerate of fellow men/empathetic. There’s a very overwhelming theme in Hamilton. People feel it’s their responsibility to look out for other human beings. There’s a lot of charity in Hamilton.

What’s the best thing about what you do?
I think that it’s just that I get to make everything up as I go along. My day can be whatever I want it to be for the most part. Of course, there is a lot of stuff that I have to do, especially with franchising. I have to be accountable for a lot of things and a lot of people, but at the same time, I can kind of make things up as I go along.[/vc_column_text][/vc_column][/vc_row][vc_row][vc_column width=”2/3″][vc_column_text]I started this when I was 24. I decided one night that I wanted a store on Queen Street, and I thought a good concept was an upscale nail salon. I was running my first location and I quickly realized that I wasn’t great at the day-to-day management stuff. I love to do things the first time, but once it becomes routine I lose interest. So, in terms of the day to day stuff; ordering supplies, scheduling, watching staffing levels, people calling in sick, the disciplinary stuff – it wasn’t my strong suit. Working on the business is what I prefer as opposed to working in the business. Writing policies and protocols, creating our manuals and working on strategy, marketing and expansion is what I thrive at.

Our locations are mainly in Toronto, and then one here, one in Guelph, one in Oakville, one in Ottawa. We also have franchise partners in Kelowna and Vancouver looking for their spaces and are working on Winnipeg and Calgary in terms of franchise deals. By October 6th, we will have 14 operational locations with close to 200 employees. It’s exciting stuff knowing that I kind of just made it all up one night – and also to think of the flip side of it – that none of this would have existed if I hadn’t followed through on that idea that night.

What’s the worst thing about what you do?
It’s the tough talks. Business, especially franchising, is all about relationships. I hate having to have sit-downs with people to have those unpleasant yet critical conversations. Also, I don’t enjoy reading legal documents. It’s dry material but also they are so important. You have to read a clause and think of what it can imply in a best-case scenario and also in a worst case. Your business can hinge on what’s written on those pages and once you put pen to paper it’s a done deal and you have to live with it good or bad.

What’s your motto?
‘High risks, high rewards.’ Another one from my dad, I think. However, as I’m getting a little older and have more responsibilities (ie: a kid) it’s getting a little harder to make those big leaps. I’m happy I started my business so young when I was so naive. It’s not as comfortable now knowing all the risks in taking out another loan of a couple hundred thousand dollars to try out a new location or a new venture, but blessing or curse I don’t have it in me to stop or slow down and I just keep coming back to that motto. I want to grow my business and my ambition is endless so I’ve got to be bold and just keep pushing forward.

What has been the biggest learning experience of your life?
I think it’s that it’s ok to just be normal and live life a little more grounded (which I can thank my husband for). I don’t seek out those extreme experiences like I used to when I was younger. For example, when I was about 26 I just decided to go to Thailand for the summer and booked the trip that day and didn’t plan a thing for it. I just showed up downtown Bangkok and thought I’d figure it out. It wasn’t till I got there that I found out there was some big festival and all the hostels/hotels/guesthouses were fully booked. I spend the next six hours (after a 23 hour flight) hot and exhausted, clawing my way through a sea of people trying to find a place to stay. So yeah, I‘ve learned not to put myself in situations that will cause me needless stress.

How do you find that your business in Hamilton differs from your other locations?
The Hamilton location is one of my favourite locations and I go here obviously, because I live here. Our girls there are so awesome; they are just so enthusiastic, professional and of course amazing at what they do. I love it because it’s a smaller location; we have about six people on staff there, which is lower than some of our other locations and there are less service stations – so it really has a neighbourhood feel to it. James Street North is also a really cool strip of town and it’s just getting better and better with more restaurants and shops opening up all the time. I think it’s going to be very different a year from now and then again two years from now.[/vc_column_text][/vc_column][vc_column width=”1/3″][vc_column_text]

Best gift you’ve ever received? A puppy. When I was about 6.

How do you like your coffee? With a little bit of cream.

Favourite solo artist? Jason Mraz although I don’t really listen to him anymore. I like 4 years ago Jason Mraz, circa 2009.

A book you plan on reading? “One More Thing: Stories and other stories. By BJ Novak. My husband had it on the plane ride for our recent trip and when he fell asleep, I read a few [stories], so I want to read the whole thing when I have time!

Dolphins or koalas? Dolphins. I don’t know anything about koalas and I don’t care.

Least favourite colour? Tawny. It’s in between brown and browny-orange. The only reason why I know this colour is because when I was in Brownies, the leader is Brown Owl and the second in command is Tawny Owl. I think it’s such a funny word and most people don’t know the colour.

If your life were a song, what would the title be? Gangster’s Paradise, but not in any literal way. It’s just such a badass song.[/vc_column_text][/vc_column][/vc_row]