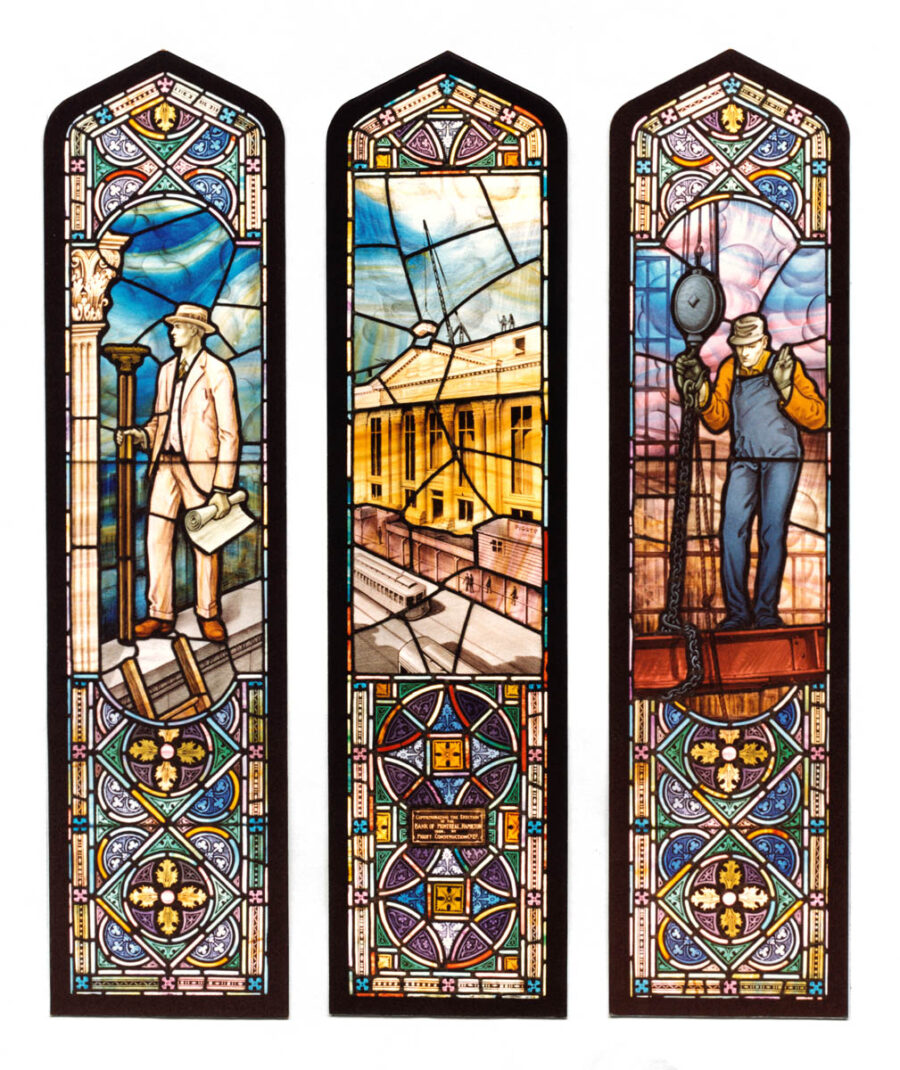 Years have passed, yet I clear remember the phone call that led to the recovery of art treasures pried from the walls of an historic downtown Hamilton landmark.

A disguised male voice said: “If you want to know where the Pigott Building stained glass windows are, contact Bernie Osbaldeston.”

It’s 1988. Bernie’s a prominent antique dealer in Hamilton. He’s known to have purchased elements of other heritage properties facing extinction, like the Birk’s building. So the tip, coming from my “deep throat” informant, makes sense.

I get advice from my friend, lawyer Ed Shaker. He says, keep things quiet, no press. Just call Bernie.

I call Bernie in my role as president of Heritage Hamilton Foundation. He confirms the situation and says he’ll sell the windows for $12,000 — the price he paid for them. Then he says, I’d better move quickly before he sells them to an interested buyer who owns a pub in Cleveland.

All of this is happening fast. So I stop to think about the Pigott Building and get my bearings.

The 18-storey Pigott office building — located on James South and heralded as Hamilton’s first skyscraper — was built by the Pigott Construction Company in 1929 for $1 million. It was designed in an unusual Art Deco/Gothic Revival hybrid style by Hamilton architects Bernard and Fred Prack.

Pigott Construction was a prominent builder at the time. Its clients ranged from McMaster University and Westinghouse to several top Canadian banks. The company also constructed the Cathedral Basilica of Christ the King and Westdale Secondary School, two of Hamilton’s most recognizable buildings, as well as the Royal Ontario Museum in Toronto, among others.

Joseph Michael Pigott Sr. (1885-1969) pany when its namesake building was taking shape. It’s said he respected the hardworking tradesmen at the heart of the construction industry — the iron- workers, stonemasons and carpenters — and was a man of faith.

These values are reflected in Mr. Pigott’s personal diaries and likely came together when he commissioned six stained glass windows for the foyer of the Pigott Building. His goal was to produce an energetic portrait of early 20th century city builders. “The stained glass windows pay tribute to the world he loved and lived in,” recalls family member Elizabeth Pigott.

The work was carried out by Toronto-based Robert McCausland Limited, artists and craftsmen of stained glass since 1856. The company’s founder, Joseph McCausland (1828-1905), was born to Anglican parents in County Armagh, Ireland, and came to Canada in 1835.

William Meikle, a Scottish immigrant and the company’s head designer between 1916 and 1934, took on the Pigott window project. He adapted old world methods to create bold and contemporary stories in glass. Meikle likely followed the company practice of importing glass from Europe — quality and colour were everything.

The Pigott Building was spared, but its days as a premier business address were changing.

Now, to return to my story…

It’s around 1984. An out of town developer is busy converting the Pigott Building into a hotel. Mysteriously work stops. Hoarding goes up and access to the site is restricted.

But numerous elements of the building, including many designated heritage items, go missing — the revolving door, fine woodwork, brass light fixtures, and of course, the six stained glass windows.

The Pigott Building is designated under Part IV of the Ontario Heritage Act. Why are people walking off with artifacts and selling them for personal profit? Who’s in charge and why aren’t they enforcing the rules?

I’m shocked, and so are my heritage colleagues.

After my talk with Bernie, the antique dealer, my focus turns to retrieving the windows. We need $12,000 in a hurry. I meet with the directors of Heritage Hamilton and then with City Alderman William (Bill) McCulloch. We hatch a plan.

Heritage Hamilton and the City of Hamilton will team up to purchase the windows from Bernie. The windows will be leased or sold to the new owners of the Pigott Building and reinstalled in their original location with suitable protection.

That’s in our minds as we arrive at Bernie’s store on Barton Street in the city’s east end. The team includes Dr. Grant Head, founder of Heritage Hamilton Foundation, Alderman McCulloch, Nina Chapple, the senior heritage consultant with the City of Hamilton, and one of her colleagues.

We take a quick look at the windows. They’re dark and very dirty. We show Bernie the cheque for $12,000. “Cash only, in small bills,” he says and shuts the door. He doesn’t want a city cheque because it might get cancelled due to the mysterious removal of the windows.

Then the fun starts.

Nina and her planning colleague pocket the cheque and drive back to the CIBC in Jackson Square. They ask for twelve grand in small notes — an impossible request for a single bank. So they carry out an elaborate plan, hopping from bank to bank, exchanging large bills for small bills. Nina’s purse is bulging with more and more bills. She feels like a prime target for a thief.

Soon they’re in a van, heading back to Bernie’s. He takes the cash, they retrieve the windows. Barton’s dug up for major road repairs, so it’s a slow and bumpy ride to the refuge of City Hall — six fragile windows, two tired rescuers.

It’s January 1989. The windows return to their maker — McCausland Limited in Toronto — where they are removed from steel casements, thoroughly cleaned, and straightened of all bows and bulges.

In February, McCausland delivers the fully restored windows to Hamilton City Hall for display at the Heritage Day celebrations in the council chambers.

It’s now presumed that the owners of the Pigott Building eventually purchased the windows and that the City of Hamilton and Heritage Hamilton Foundation were reimbursed as per the agreement.

On Monday December 17, 1990, the windows were reinstalled in the Pigott Building foyer. Today, as in the past, there are two sets of three windows on opposite sides of the space.

The middle window of the south set depicts the partially finished Pigott tower with the upper floors incomplete in order to reveal the steel skeleton beneath the masonry veneer and concrete shell. The window to the left, shows a carpenter in blue overalls, poised midway up a ladder with saw in hand. The window to the right depicts an architect, a scroll of blueprints in his hand, standing atop the building and surveying the city below.

The middle window of the north set captures the final stages of construction of the Bank of Montreal on James South in 1928 — another Pigott project. The window to the left shows a mason, trowel in hand, guiding a stone block into place. He stands on scaffolding which allows the viewer to see the steel members holding the masonry in place. The window to the right depicts an ironworker perched on an I-beam being hoisted by an out-of-frame overhead crane.

Art historian Dr. Barry Magrill wrote the following in the January 2011 issue of Architecture magazine: “The windows in the Pigott Building express something compelling about Pigott Construction because it positioned itself as a proponent of the latest technology while also remaining committed to stylistic tradition.”

He goes on to say that the windows — which clearly document steel beam construction practices — suggest a company that’s an industry leader and ahead of many firms clinging to the use of load-bearing walls.

And, yes, I finally set the record straight with Bernie Osbaldeston, now in his 90s and living in Florida.

During a recent phone call, he wanted me to know he’s a “good citizen” who believed all along that the Pigott windows need to remain in his hometown Hamilton. Sorry Cleveland!

I ask Bernie: “Are you the deep throat tipster who called me in ’88?” “No,” he says…then our conversation moves to other matters. This part of our art caper remains a mystery. Looking back, it’s important to also give credit to James Whitehall, auctioneer (who appraised the windows at a value of $16,000 in 1988), former Alderman Bill McCulloch, Heritage Hamilton Foundation and citizen activism for the retrieval and reinstallation of the Pigott Building stained glass windows.

I think we can take away three timeless lessons from this story:

1. Remain vigilant — everyone must help safeguard our heritage buildings and their contents.
2. Take action — people in positions of authority must enforce the rules established to protect our heritage.
3. Get creative — look for innovative ways to overcome barriers to conservation.

Special thanks to Judy Pigott Hendry and Elizabeth Pigott for sharing their remembrances, Alissa Golden, Cultural Heritage Planner for permitting me to review the Pigott Building files, and Ken Coit, architect for the images.