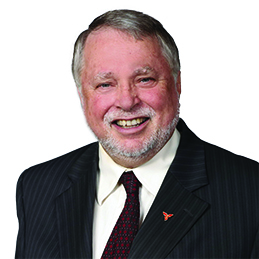 The first annual ranking of Hamilton’s most influential people

According to the Merriam-Webster Dictionary, influence is defined as the power to change or affect someone or something : the power to cause changes without directly forcing them to happen. Selected and ranked by a panel of local leaders, our first annual Influence List pro- files thirty of the people who affect Hamilton profoundly on a daily basis.

By Judy Marsales, Broker/Owner, Judy Marsales Real Estate Limited
Ted McMeekin has had such an influence in our community in so many different ways. I had the pleasure of getting to know Ted when I gingerly ventured into politics in the Provincial Election of 2003. I was the “nervous new candidate” and Ted was the knowledgeable colleague from the then riding of Dundas/Ancaster/Flamborough/Aldershot. I was so impressed by Ted’s knowledge of the community, his passion for people, and his tremendous ability to work with his team to effect the best outcomes for his constituency. Once elected, I was also impressed by his dedicated work ethic whether in Queen’s Park at any number of committee hearings fighting passionately for his community, or addressing the opposition with grace and humour… presenting Government papers and Legislation on a variety of topics, or working diligently to attend and support as many community events as is humanly possible given his strenuous schedule. Did I mention his quirky humour…Ted has a funny story in every speech. I am proud to consider Ted a friend and I will be forever thankful for his guidance and support at Queen’s Park. Ted’s influence has touched us all in this community. Thank you Ted.

By Mark Rizzo, past chair, Hamilton Health Sciences
While Chair of Hamilton Health Sciences, I’d often find myself searching the board for that clear concise articulate voice that would help shape the conversation and bring it back to its proper conclusion. In my experience on any board there are only a few individuals that can be counted on to provide the right message in a direct thoughtful way at the right time. Dr. John Kelton was one such individual I could count on to positively influence the board in such deliberations. I’ll forever be grateful to him for that.

Dr. Kelton has lead the Micheal G DeGroote School of Medicine to be internationally recognized for its academic excellence and research. In partnership with Hamilton Health Sciences and St. Josephs Healthcare, the School of Medicine has turned Hamilton into an international leader in medical research, creating hundreds of skilled jobs. His ability to influence our local municipal politicians in moving the McMaster Family Health Practice downtown was no small feat!

As a world renowned physician, teacher, leader in research, and Dean, Dr. Kelton’s influence in this community will be experienced for years to come.

By Mike Shea, Supt. of Corporate Services, Hamilton Police Services
Glenn De Caire has pride in quality service and an extremely strong resolve in regard to community partnerships. Under his leadership, traffic enforcement has increased by more than 50 per cent and criminal arrests have increased significantly—in excess of 1,400 per year. Motor vehicle collisions have decreased and the number of impaired driving arrests has increased each year; our roads are safer due to this strategic focus.

The Hamilton Police Service ACTION Strategy, Bail Compliance Unit, Social Navigator Program and Mobile Crisis Rapid Response Team are innovative strategies designed under De Caire’s direction. These initiatives assisted the HPS in being recognized as having the greatest decline in violent crime severity in the nation.

De Caire presented a business case for funding to address immediate issues involving persons in crisis. Not only was he able to secure base funding for this initiative, the extremely successful “made in Hamilton” strategy is now being replicated throughout the Hamilton Niagara Haldimand Brant Local Health Integration Network and is being studied by policing agencies worldwide.

Every policy within the HPS has been reviewed and updated under De Caire’s command and, for the first time in the history of the Hamilton Police Service, an annual ministry audit reported “no recommendations”.

As a result of De Caire’s leadership, the HPS is recognized as a leader in community partnerships—top in the province for programs such as COAST, High Risk Domestic Offenders monitoring, Bail Safety Program, Missing Persons Risk Factor Model and Search Urgency Protocol.

Since he became chief of police, robberies are down 54 per cent, break & enters are down 31 per cent, and stolen autos are down 61 per cent.

De Caire is a tireless advocate in regard to issues surrounding homelessness, poverty, hunger, mental health, crime, and abuse in Hamilton. He is recognizable at almost every major event in this city— in uniform.

By Terry Cooke, President, Hamilton Community Foundation
My friend Rob MacIsaac is both under- stated and unflappable. But his positive impact as a city builder in Hamilton and the Golden Horseshoe has been enormous. Rob has been critical to the creation of the province’s greenbelt, imagining the Big Move (GTHA Transit), rebuilding Mohawk College and using the Access Program to help more kids cross its threshold. He has strengthened the links between Burlington and the Hammer and created an extraordinary legacy of leadership and vision that will benefit our community for generations to come. We are so lucky to have him.

By Fred Eisenberger, Mayor of Hamilton
As the International Vice President and Regional Manager for Central and East- ern Canada of the powerful labour union, LiUNA (Labourers’ International Union of North America), Joe Mancinelli is likely not a surprise inclusion on this list for anyone. Mancinelli’s influence has been built and strengthened over roughly 40 years in working with organized labour. Overseeing the union’s Canadian locals with over 100,000 members and a portfolio of well over $5 billion in pension funds, Mancinelli has become a prominent labour leader not only here in Hamilton but across the country. Locally, his endeavours have included the restoration of both Liuna Station and the Lister Block, as well as two long-term care facilities in the city. Highly active in local politics, Mancinelli has often wielded his influence to help elect multiple candidates in all levels of government through fundraising and volunteer support. A fact that most people may not know about this influential local labour leader is that he is also an accomplished artist. Mancinelli’s proud Italian heritage is the subject of much of his work, which depicts colourful scenes of Italy as well as many local landmarks in Hamilton, for which he has endless passion.