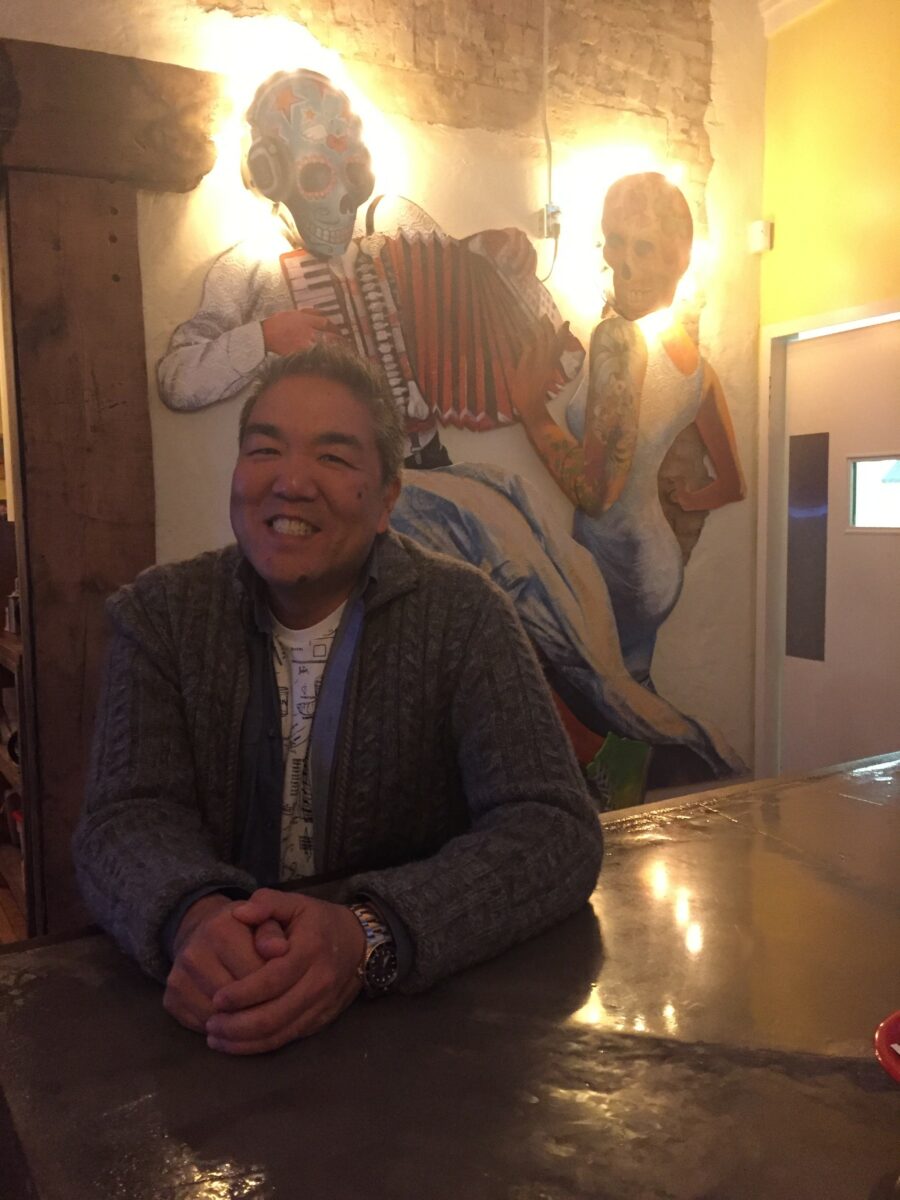 I met Mark through Erin Dunham and knew I had met a quality Hamiltonian. His love for music is only rivaled by his love for Hamilton. He has been a DJ at many parties and events I have been to, and has such a gift for playing the perfect song at the perfect moment. (You can find him spinning tracks at The Mule on Fridays and Saturdays.) We sat down together at The Mule for New York Sours and Moscow Mules and chatted about retail, a Russian Jew named Sid, and our favourite intersections in Hamilton. Grab a cocktail and you will discover one of the most genuine, warm-hearted, generous people Hamilton has to offer. And when you’re done, head over to Dr. Disc on Wilson Street and grab a couple records, you’ll be glad you did.

As far as retail goes, my old boss was a Russian Jew, Sid, who started Dr. Disc, really interesting fellow. The best business advice I’ve ever gotten was from him; “Buy by the bushel, sell by the basket.” So, he would go see someone who advertised a whole bunch of CDs or records for sale, he would walk in, cash in hand, and buy everything. He would make the deal and it would be up to his employees to break everything up and sell it. He wasn’t too concerned about the individual thing, as long as he got a good deal on a bulk of stuff, he would figure he could make money of the piecemeal.

If money was no object, what would you do all day?

I’d probably work in some respect. I probably wouldn’t work as much as I do right now. I re-acquainted myself with DJing which I really like. It’s music with a social aspect to it, which I really like. I would probably do more things like that, as opposed to the accounting and back-end stuff of retail which isn’t that fun, but it saves money. I would hire people to do the things that don’t immediately involve music. I think I would travel more. I get millions of air miles but, I end up selling them because I don’t have enough time to use them.

If you could only eat one style of food for the rest of your life, what would it be?

A lot of people ask me that, and just assume that, because of my appearance, I am going to say Japanese food or Asian food. I love food that has a lot of spice, and flavour and is challenging. So, I love Latin food. It changes from day to day, and moment to moment. It’s like music; sometimes you feel like listening to punk, and other times it needs to be more mellow. I would have to say Thai or Latin are up there right now for me.

What’s the best thing about what you do?

Let me preface that by saying, we opened Dr. Disc in 1991. There hasn’t been a day that I’ve said “Oh no, I have to go to work.” There have been days that have been long or exhausting but I’ve never regretted my career path. I love my job and I love the people. I would have to say the people make my job and my choice most enjoyable.

What’s the worst thing about what you do?

What are you most looking forward to in the next year?

To be honest, I’m very community based. When things are good, you don’t really look at where the money’s coming from, you’re just happy. When things are bad, you re-prioritize, and re-assess. So, when things were bad in the music industry, and CD sales are tailing off, and vinyl hadn’t really come back yet, I took a step back and re-prioritized. What I discovered, the people who kept the store going, and who are still supporting it are within a 10 mile radius. So, community is what I’m into right now, and is definitely my focus. I never should have lost that. The thing that most excites me now, and in the near future of two to three years, is the revitalization of Hamilton. To be a part of that is just incredible.

November is Novemburger. So, what’s the best burger you’ve ever eaten?

I kind of joke that it’s kind of cheating to use all of the fatty ingredients, but there was a duck burger at Rapscallion last year. It was so decadent. (Editor’s note: It won Best Burger in Novemburger 2014). Personally, the one I like, straight over the counter is Delirious Burger Co. The way they cook them, the hand- selected meat, the way they are hand formed and the way they grill them on the flat top, it caramelizes them on the outside, and keeps them tender on the inside. That duck burger though, was ridiculous.

What’s your favourite weather and why?

Anything but snow. I’m big into jackets and shoes, and people ask me if I need another fall jacket, I probably have about 30 of them. I am not too big of a sweater guy. Jacket weather or summer weather are my favourites.

What is your favourite intersection in Hamilton?

I am going to be super biased, but I’m going to say Wilson and James. It’s changes so much. When we moved into there, the parking lot that is adjacent to us was gravel. James was a roaring four-lane one-way street. I’ve seen everything on that intersection like major acci- dents every few minutes because people would race to meet the synchronized lights, squealing tires. It’s such a barometer of the downtown, even more so now. The changes that have happened at that intersection, or near that inter- section is a barometer of the health of the downtown. You can look at it as a microcosm.

Talk about the evolution of music buying and how people experience music. It’s changed so much over the years; vinyl, tapes, CDs, and now back to vinyl.

I think there are numerous ways to listen to music. Vinyl is a very tactical experience, a very personal experience. Digital files are all the same. Records, whether you spill coffee on them, or there is a skip in them, it’s very personal. It’s an active experience to listen to them. Music and technology do go hand in hand. When things became uber-convenient with iPhones, iPads, downloading digital music, people lost touch with music. I think it was grey-suited people in offices saying “It’s going to be amazing, everyone is going to be able to download, they won’t have to have any physical storage of the media, and they are going to have everything digitally.” It sounded great, and for a while that’s what happened.

It was the downfall of CDs and the upswing of downloading that almost killed Dr. Disc because people were gravitating to now having a physical format. But, what happens is, cassette tapes, CDs, vinyl all have an emotional resonance to them. So, I can pick up a record that I have in my collection and I can know where I got it, who I was with when I listened to it, if I’m DJing, I remember where I played it, sometimes I hear a song and it takes me back to that time. People have this emotional resonance with objects and they like to collect physical things, and that was one of the big impetuses for the resurgence of vinyl; people like the resonance that an object has, and they like to collect things, and show off their collection. The analogy I use is “come over to see my record collection” and point at my hard drive. It has no relevance or personal significance. The other analogy I use, for records that have personal significance and relevance, downloading is not the same. When did you download this album? You can’t tell. It’s faceless. When you listen to things digitally, it becomes background music. You don’t have to pay attention — one thing plays after another, after another. You aren’t even paying attention, vs. records that require very active listening. The whole swing back to vinyl is people realizing the value of it.

It’s the same thing for books; books will never die. The authors, or artists, or their publishing houses design books, like album cov- ers. They are printed on certain paper. Album jackets can have art, or lyrics, posters. There is humanness to records and physical things that people will never get over. Thankfully, people will not just sacrifice that part of themselves, and that part of the emotional impact of those objects. They won’t sacrifice that part of the purely “convenient” format. That is the big rea- son that gravitate toward Dr. Disc and records.

WHAT ARE YOU MOST EXCITED ABOUT THESE DAYS? Hamilton community for sure, hands down. And food.

BEST GIFT YOU’VE EVER RECEIVED? Erin Dunham made me a pictograph of haiku. It has been
a joke between us since we met, so she made a visual representation of a haiku and I look at it every morning.

A BOOK YOU PLAN ON READING? Fahrenheit 451. Sitting on my shelf.

HIDDEN TALENT? I love to cook (not sure how hidden that is).

THE FIRST THING I DO WHEN I GET HOME IS… Scoop for your readers, I live above the store. My loft is sacred ground. The first thing I do is either cook or lie on the couch.

BEST WAY TO DECOMPRESS? Cooking. A lot of people would think I would say listen to music. That’s my job though, I need to lis- ten to all sorts of music all the time, so when I have down time, I really don’t listen to a lot of music.

IF YOUR LIFE WERE A SONG, WHAT WOULD THE TITLE BE? There is a song by Moby called Go! So I guess that would be it!

FAVOURITE HOLIDAY? Any holiday that the store is not open.

WHAT DO YOU THINK ABOUT WHEN YOU’RE ALONE IN YOUR CAR? I don’t have to commute because I live above the shop, so when I do commute, it’s to Buffalo to pick up product and it’s totally zen for me. I prioritize and make lists in my head.

WINDOW OR AISLE? Either/or. I would say window because I never get up to do anything. I sit by the window so if someone needs to get up to do whatever, they are free to do so.

BEATLES OR STONES?  I was a Beatles guy, but now I’m a Stones guy.

WHAT IS SOMETHING NEW YOU LEARNED THIS WEEK? I’ll have to get back to you.